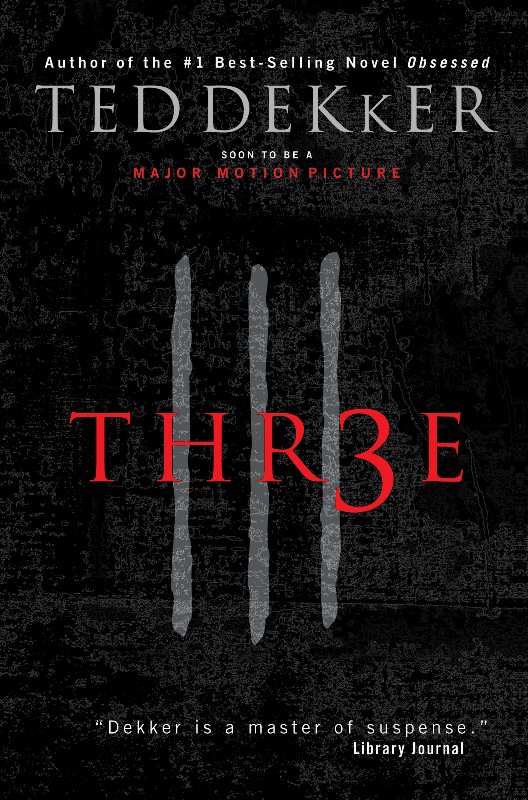 “Dekker delivers another page-turner . . . masterfully takes readers on a ride full of plot twists and turns . . . a compelling tale of cat and mouse . . . an almost perfect blend of suspense, mystery and horror.”

“Three
is a rare suspense story that is truly suspenseful, and absolutely impossible to put down! Dekker outdoes the masters of the thriller genre with a plot so compelling, so effective, so full of twists and turns that readers are kept on the edge of their seats right to the last few pages.”

“Well, well, well, guess what I’ve found? A fiction writer with a rare knack for a compelling story, an expansive reservoir of clever ideas, and a unique wit that makes me laugh.”

“Ted Dekker is clearly one of the most gripping storytellers alive today. He creates plots that keep your heart pounding and palms sweating even after you’ve finished his books.”

“Someone recently asked if I would be interested in reading the hottest new fiction writer on the market. I asked who that might that be, expecting a writer along the lines of John Grisham or Stephen King. Instead, I was introduced to
Blink
, the new novel by Ted Dekker. They were right. . . . Ted Dekker has caused me to miss some serious sleep the past three nights! Dekker is awesome. I will own everything he writes.”

“Ted Dekker is the most exciting writer I’ve read in a very long time.
Blink
will expand his fan base tremendously. Wonderful reading . . . powerful insights. Bravo!”

“Cloaked in the mystery of Saudi Arabia, this tale woven by Dekker is compulsively readable. Written with an arresting hybrid of suspense and love,
Blink
casts a sweeping light on a surreal world where the future is buried by the past. Saudi Arabia was my home for twelve years. Dekker has an uncanny ability to capture the true essence of the world’s most mysterious land in this hauntingly beautiful story. You will be astonished.”

“Ted is a great weaver of stories that are believable yet tinged with the mystery of the unseen.”

“Dekker is an emerging powerhouse among fiction writers.
Blink
is a thrilling tale that grabs your attention immediately and is near impossible to put down.”

“[
Thunder of Heaven
is] a real page-turner . . . scenes read like the best of David Morrell . . . his description is upsettingly precise.”

All rights reserved. No portion of this book may be reproduced, stored in a retrieval system, or transmitted in any form or by any means—electronic, mechanical, photocopy, recording, or any other—except for brief quotations in printed reviews, without the prior permission of the publisher.

Scripture quotations used in this book are taken from The Holy Bible, New International Version, © 1973, 1978, 1984 by International Bible Society. Used by permission of Zondervan Publishing House.

This is a work of fiction. Any similarities to actual persons, living or dead, is purely coincidental.

T
HE OFFICE HAD NO WINDOWS, only electric lanterns to light the hundreds of spines standing in their cherry wood bookcases. A single lawyer’s lamp spread its yellow hue over the leather-topped desk. The room smelled of linseed oil and musty pages, but to Dr. John Francis it was the scent of knowledge.

“Evil is beyond the reach of no man.”

“But can a man remove himself beyond the reach of evil?” Kevin asked.

The dean of academic affairs, Dr. John Francis, gazed over bifocals at the man who sat opposite him and allowed a small smile to nudge his lips. Those blue eyes hid a deep mystery, one that had eluded him since their first meeting three months earlier when Kevin Parson approached him after a philosophy lecture. They’d struck up a unique friendship that included numerous discussions such as this one.

Kevin sat with his feet flat, hands on knees, eyes piercing and unmoving, hair ruffled despite a compulsive habit of running his fingers through his loose brown curls. Or because of it. The hair was an anomaly; in every other way the man groomed himself perfectly. Clean shaven, fashionably current, pleasantly scented—Old Spice, if the professor guessed right. Kevin’s ragged hair begged to differ in a bohemian sort of way. Others fiddled with pencils or twirled their fingers or shifted in their seats; Kevin ran his fingers through his hair and tapped his right foot. Not now and then or at appropriate breaks in the conversation, but regularly, to the beat of a hidden drum behind his blue eyes. Some might consider the idiosyncrasies annoying, but Dr. Francis saw them as nothing more than enigmatic clues to Kevin’s nature. The truth—rarely obvious and almost always found in subtleies. In the tapping of feet and the fiddling of fingers and the movement of eyes.

Dr. Francis pushed his black leather chair back from the desk, stood slowly to his feet, and walked to a bookcase filled with the works of the ancient scholars. In many ways he identified with these men as much as he did with the modern man. Put a robe on him and he would look rather like a bearded Socrates, Kevin had once told him. He ran a finger over a bound copy of the Dead Sea Scrolls.

“Indeed,” Dr. Francis said. “Can man step beyond evil’s reach? I think not. Not in this lifetime.”

“Then all men are condemned to a life of evil,” Kevin said.

Dr. Francis faced him. Kevin watched, unmoving except for his right foot, tapping away. His round blue eyes held steady, stared with the innocence of a child’s, probing, magnetic, unabashed. These eyes attracted long stares from the secure and forced the less secure to avert their gaze. Kevin was twenty-eight, but he possessed a strange blend of brilliance and naiveté that Dr. Francis could not understand. The full-grown man thirsted for knowledge like a five-year-old. Something to do with a unique rearing in a bizarre home, but Kevin had never been forthcoming.

“A lifetime
struggle
with evil, not a life of evil,” Dr. Francis clarified.

“And does man simply choose evil, or does he create it?” Kevin asked, already many thoughts beyond his initial question. “Is evil a force that swims in human blood, struggling to find its way into the heart, or is it an external possibility wanting to be formed?”

“I would say man chooses evil rather than creates it. Human nature’s saturated with evil as a result of the Fall. We are all evil.”

“And we are all good,” Kevin said, tapping his foot. “The good, the bad, and the beautiful.”

Dr. Francis nodded at the use of the phrase he’d coined, which referred to the man created in God’s nature, the beautiful man, struggling between the good and the bad. “The good, the bad, and the beautiful. Indeed.” He stepped for the door. “Walk with me, Kevin.”

Kevin ran both hands past his temples and stood. Dr. Francis led him from the office and up a flight of steps to the world above, as Kevin liked to call it.

“How is your paper on the natures progressing?” Dr. Francis asked.

“Guaranteed to raise your eyebrows.” They stepped into the empty main hall. “I’m using a story to illustrate my conclusion. Not conventional, I know, but since Christ preferred to use fiction to communicate truth, I figured you wouldn’t mind if I borrowed from him.”

“As long as it makes the point. I look forward to reading it.”

Kevin walked with Dr. John Francis down the hall, thinking that he liked this man beside him. The sound of their shoes striking the hardwood floor echoed through the chamber steeped in tradition. The older man strolled casually, his ready smile hinting at wisdom far beyond his words. Kevin glanced up at the paintings of the divinity school’s founders along the wall to his right. Bold, gentle giants, Dr. Francis called them.

“Speaking of evil, all men are capable of gossip, don’t you think?” Kevin asked.

“Even the bishop is capable of gossip.”

“Do you think the bishop does gossip? Sometimes?”

The dean’s answer waited three steps. “We are all human.”

They came to the large door that opened to the central campus and Dr. Francis pushed it open. Despite the ocean breezes, Long Beach could not escape periodic stretches of oppressive heat. Kevin stepped out into the bright midday sunlight, and for a moment their philosophical bantering felt trivial in light of the world before him. A dozen seminary students walked across the manicured park, heads bent in thought or tilted back with smiles. Two dozen poplars formed an avenue through the expansive lawn. The chapel’s steeple towered over the trees beyond the park. To his right, the Augustine Memorial Library glistened in the sun. The Divinity School of the Pacific, South, was at a glance statelier and more modern than its parent, the Episcopal seminary in Berkeley.