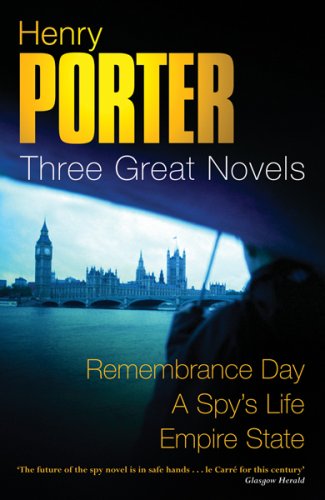 ‘Magnificent . . . [he has] learned the oldest lesson: that characterisation and narrative are all’

‘As with his first thriller,
Remembrance Day
, Porter demonstrates great technical ingenuity . . . Yet this is embedded in a complex web of emotional relationships . . . Porter has proved that he is a torchbearer in a great tradition’

‘At times [the hero] quietly reminded me of Sean Lemass, in John le Carré’s
The Spy who Came in from the Cold
. I cannot think of a higher compliment’

‘The best book of its kind I’ve read since
The Day of the Jackal
. When thrillers get better than this, I’d like to read them’

‘A captivating first novel . . . Pacy and well-researched and culminates in an explosive finale’

‘A fiendishly cunning plot . . . A tough ingenious thriller . . . As polished and professional a piece of work as you would expect from any veteran thriller writer’

Literary Review
Henry Porter has written for most national broadsheet newspapers. He was editor of the Atticus column on the Sunday Times, moving to set up the Sunday Correspondent magazine in 1988. He contributes commentary and reportage to the Guardian, Observer, Evening Standard and Sunday Telegraph. He won the Ian Fleming Steel Dagger for
Brandenburg
in 2005. He is the British editor of the American magazine Vanity Fair and divides his time between New York and London.
www.henry-porter.com