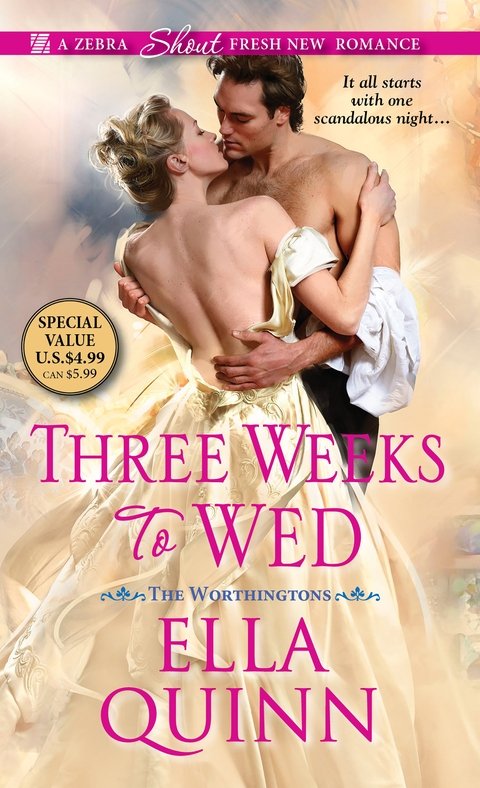 THREE WEEKS TO WED
Worthington's heat, his scent, seemed to drift across the desk to her. Reminding her of how good it felt to be in his arms. God help her, all she wanted was for him to touch her.
The next thing she knew his strong arms lifted her from the chair and drew her close to him.
“Grace, I know you don't think I still want to marry you, but I do.” His lips brushed her forehead. “I can't live without you. I like all of your brothers and sisters. I want to take care of all of you. Please let me.”
“You don't”âher blood roared in her earsâ“you cannot know what you're saying. I have seven,
seven
brothers and sisters. The youngest is only five.”
He grinned as his lips made their way to her jaw. “She'll be six in summer.”
Grace wanted to sink into him, have him sink into her. She fought the urge to cant her neck, giving him easier access.
This would not do!
Rubbing her temples, she gazed into his mesmerizing lapis eyes. “I don't understand you at all. Why do you want to take us on?”
“To make you happy. To make us a family.”
He reached out and curled one of her locks around his finger. She stared into his eyes. The blue depths combined humor and hope. He made her want to hope. Although he didn't touch her, she was drawn toward him.
He bent his head. “Let me love you.”
Grace was in his embrace again and somehow her arms were around his neck.
Their lips met in a kiss . . .
Books by Ella Quinn
Â
Â
The Marriage Game
Â
THE SEDUCTION OF LADY PHOEBE
Â
THE SECRET LIFE OF MISS ANNA MARSH
Â
THE TEMPTATION OF LADY SERENA
Â
DESIRING LADY CARO
Â
ENTICING MISS EUGENIE VILLARET
Â
A KISS FOR LADY MARY
Â
LADY BERESFORD'S LOVER
Â
MISS FEATHERTON'S CHRISTMAS PRINCE
Â
Â
The Worthingtons
Â
THREE WEEKS TO WED
Â
Â
Novellas
Â
MADELEINE'S CHRISTMAS WISH
Â
Â
Â
Published by Kensington Publishing Corporation
T
HREE
W
EEKS
To W
ED
ELLA QUINN

Switch by John Lutz
Playing with Fire by Amy Knupp
Root of His Evil by James M. Cain
A Wedding Story by Dee Tenorio
The Fatal Eggs by Mikhail Bulgakov
Fire Watch by Connie Willis
Cathedral Windows by Clare O'Donohue
Mad for the Plaid by Karen Hawkins
Deadline by Gerry Boyle
Confessions of a Bad Bridesmaid by Jennifer Rae