Read Through the Window: Seventeen Essays and a Short Story (Vintage International) Online

Through the Window: Seventeen Essays and a Short Story (Vintage International) 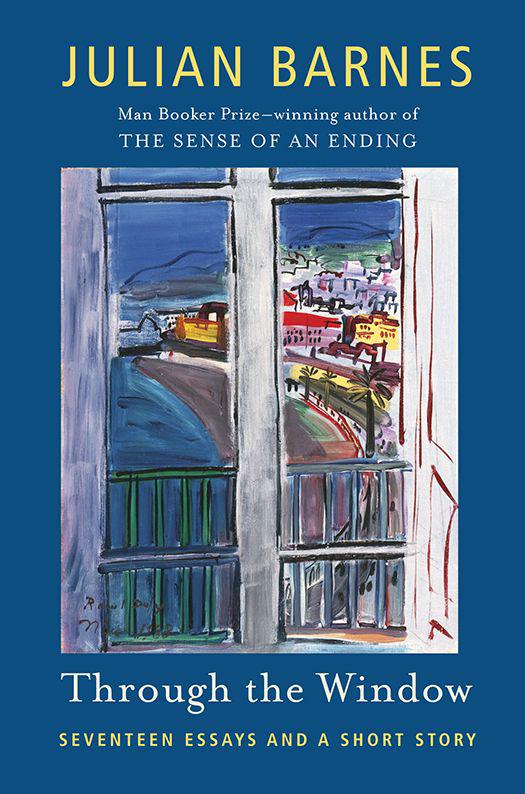 Julian Barnes
THROUGH THE WINDOW

Julian Barnes is the author of eleven novels, three books of short stories, and three collections of journalism. In addition to the Booker Prize, his other honors include the Somerset Maugham Award, the Geoffrey Faber Memorial Prize, and the E. M. Forster Award from the American Academy of Arts and Letters. He lives in London.

FICTION
Metroland
Before She Met Me
Flaubert’s Parrot
Staring at the Sun
A History of the World in 10 ½ Chapters
Talking It Over
The Porcupine
Cross Channel
England, England
Love, Etc
.
The Lemon Table
Arthur & George
Pulse
The Sense of an Ending

NONFICTION
Nothing to Be Frightened Of
Letters from London, 1990–1995
Something to Declare
The Pedant in the Kitchen

TRANSLATION
In the Land of Pain
by Alphonse Daudet 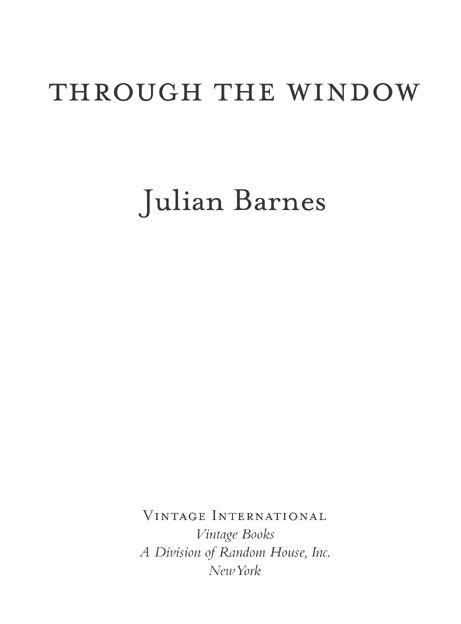 Vintage is a registered trademark and Vintage International and colophon are trademarks of Random House, Inc.

The short story “Homage to Hemingway” is a work of fiction. Names, characters, places, and incidents either are the product of the author’s imagination or are used fictitiously. Any resemblance to actual persons, living or dead, events, or locales is entirely coincidental.

Grateful acknowledgment is made to the following for permission to reprint previously published (and unpublished) material:

A. P. Watt Ltd.: Excerpts from Kipling’s diaries. Used by permission of A. P. Watt Ltd. on behalf of The National Trust for Places of Historic Interest or Natural Beauty.

The Cataloging-in-Publication Data is on file at the Library of Congress.

I
HAVE LIVED IN BOOKS
, for books, by and with books; in recent years, I have been fortunate enough to be able to live from books. And it was through books that I first realized there were other worlds beyond my own; first imagined what it might be like to be another person; first encountered that deeply intimate bond made when a writer’s voice gets inside a reader’s head. I was perhaps lucky that for the first ten years of my life there was no competition from television; and when one finally arrived into the household, it was under the strict control of my parents. They were both schoolteachers, so respect for the book and what it contained were implicit. We didn’t go to church, but we did go to the library.

My maternal grandparents were also teachers. Grandpa had a mail-order set of Dickens and a
Nelson’s Encyclopaedia
in about twenty-five small red volumes. My parents had classier and more varied books, and in later life became members of the Folio Society. I grew up assuming that all homes contained books; that this was normal. It was normal, too, that they were valued for their usefulness: to learn from at school, to dispense and verify information, and to entertain during the holidays. My father had collections of
Times
Fourth Leaders; my mother might enjoy a Nancy Mitford. Their shelves also contained the leather-bound prizes my father had won at Ilkeston County School between 1921 and 1925, mostly for ‘General Proficiency’ or ‘General Excellence’:
The Pageant of English Prose
, Goldsmith’s
Poetical Works
, Cary’s
Dante
, Lytton’s
Last of the Barons
, Charles Reade’s
The Cloister and the Hearth
.

The local high street included an establishment we referred to as ‘the bookshop’. In fact, it was a fancy-goods store plus stationer’s with a downstairs room, about half of which was given over to books. Some of them were quite respectable—Penguin classics, Penguin and Pan fiction. Part of me assumed that these were all the books that there were. I mean, I knew there were different books in the public library, and there were school books, which were again different; but in terms of the wider world of books, I assumed this tiny sample was somehow representative. Occasionally, in another suburb or town, we might visit a ‘real’ bookshop, which usually turned out to be a branch of W. H. Smith.

The only variant book-source came if you won a school prize (I was at City of London School, then on Victoria Embankment next to Blackfriars Bridge). Winners were allowed to choose their own books, usually under parental supervision. But again, this was somehow a narrowing rather than a broadening exercise. You could choose them only from a selection available at a private showroom in an office block on the South Bank: a place both slightly mysterious and utterly functional. It was, I later discovered, yet another part of W. H. Smith. Here were books of weight and worthiness, the sort to be admired rather than perhaps ever read. Your school prize would have a particular value, you chose a book for up to that amount, whereupon it vanished from your sight, to reappear on Lord Mayor’s Prize Day, when the Lord Mayor of London, in full regalia, would personally hand it over to you. Now it would contain a pasted-in page on the front endpaper describing your achievement, while the cloth cover bore the gilt-embossed school arms. I can remember little of what I obediently chose when guided by my parents. But in 1963 I won the Mortimer English prize, and, being now seventeen, must have gone by myself to that depository of seriousness, where I found (whose slip-up could it have been?) a copy of
Ulysses
. I can still see the disapproving face of the Lord Mayor as his protectively gloved hand passed over to me this notoriously filthy novel.

By now, I was beginning to view books as more than just utilitarian: sources of information, instruction, delight or titillation. First there was the excitement and meaning of possession. To own a certain book—and to choose it without help—was to define yourself. And that self-definition had to be protected, physically. So I would cover my favourite books (paperbacks, inevitably, out of financial constraint) with transparent Fablon. First, though, I would write my name—in a recently acquired italic hand, in blue ink, underlined with red—on the edge of the inside cover. The Fablon would then be cut and fitted so that it also covered and protected the ownership signature. Some of these books—for instance, David Magarshak’s Penguin translations of the Russian classics—are still on my shelves.

Carrhae by Peter Darman
Bloody Trail by Ford Fargo
Soldier's Valentine by Lane, Lizzie
Ice Cold by Adair, Cherry
The She by Carol Plum-Ucci
The Deepest Red by Miriam Bell
Joelle's Secret by Gilbert Morris
Secret sea; by White, Robb, 1909-1990
Liam by Toni Griffin
The Red Cross of Gold I:. The Knight of Death by Brendan Carroll