Read Till We Meet Again Online

Till We Meet Again 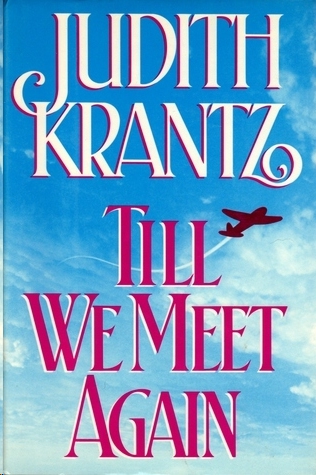 Mac didn’t move as Freddy made a perfect landing; the red plane set down sweetly on its front wheels, its small back wheel touching down at the same time. His hands were still clenched as she taxied over and came to a stop not far from where he stood, and they relaxed only when she cut the engine. The door opened and she hurtled out of the plane in one bound, almost knocking him over with the force of her rapture as she flung her arms around him. She burned in the night like a Fourth of July sparkler, her red hair whipped by the wind, her eyes so incandescent that they flung light wherever they looked.

“I did it! I did it!” she exclaimed, and kissed him all over his face. She opened her arms wide and looked up at the evening star as if she owned it. “I did it, Mac! Oh, thank you! Thank you!” He found he couldn’t speak. He felt as young, as triumphant, as intoxicated as she; the emotions he had long forgotten closed his throat with prohibited tears. He tapped his watch and shook his head warningly. “I know,” Freddy said. “I have to go or I’ll be late. I’m late already. Oh, Mac, I don’t care. O.K., I’ll go, I’ll go. But, Mac, I’ll be back! There’s so much to learn.”

Forgetting to fill in her logbook, she gave him another huge hug and a last grateful kiss and ran out to the road to hitch a ride back home. Mac still stood on the landing strip. On his cold cheeks he could feel the warmth of her impulsive kisses. It seemed as if her strong arms were still wrapped around him, her wildly happy voice still rang in his head. He sighed and shook his head. As he started to tie down the Taylor he stopped and rubbed his cheek with a slow, meditative, half-astonished grin. Sweet sixteen, he said to himself, sweet sixteen—so that’s what it was all about.

TILL WE MEET AGAIN
A Bantam Book / published by arrangement with Crown Publishers, Inc

Grateful acknowledgment is given for permission to reprint lyrics from the following:
“Till We Meet Again” by Richard A Whiting and Raymond B Egan
Copyright © 1918 by Warner Brothers, Inc Copyright renewed All rights reserved Used by permission of Warner/Chappell Music, Inc

All rights reserved
Copyright © 1988 by Judith Krantz
Library of Congress Catalog Card Number. 88-11857
No part of this book may be reproduced or transmitted in any form or by any means, electronic or mechanical, including photocopying, recording, or by any information storage and retrieval system, without permission in writing from the publisher
.
For information address: Crown Publishers, Inc
,
299 Park Avenue, New York, New York 10171

Bantam Books are published by Bantam books, a division of Random House, Inc Its trademark, consisting of the words “Bantam Books” and the portrayal of a rooster, is Registered in U S Patent and Trademark Office and in other countries Marca Registrada Bantam Books, 1540 Broadway, New York, New York 10036

H
OW could today possibly be her sixtieth birthday, wondered Eve, Vicomtesse Paul-Sébastian de Lancel, and the greatest lady in the province of Champagne, when, since morning, her spirit had been invaded by a sense of sparkling exhilaration, as festive as an orchard in full bloom, wind-tossed under a holiday sky?

Before breakfast she had slipped outside, as she did every morning, to inspect the vines that grew closest to the Château de Valmont, the home of the Lancels. The warm spring of April 1956 had caused an unusually large number of newborn bunches of grapes to emerge from the buds. Everywhere in the fruitful countryside, from the two-acre vineyards of the workers to the great holdings of the makers of the
Grands Marques
of champagne, such as Lancel, Moët & Chandon, and Bollinger, the news of abundance had spread from one freshly green hilltop to another
.

Her happiness had nothing to do with the possibility of a large harvest, Eve de Lancel thought, as she dressed much later in the day for her gala dinner birthday party. Harvests were always problematical, spring bounty was no guarantee of autumn fulfillment. Today had unfolded with dancing steps because all her family had gathered at Valmont to celebrate with her
.

Last night, at one minute before midnight, she had been fifty-nine. One minute later she had become sixty. Why was her age today not fifty-nine plus a few hours? Eve asked herself. Did you have to be sixty to know, absolutely, that sixty was a nonsensical number when it attached itself to you, no matter what foolishness it symbolized to the world? Was this a universal secret, shared by all those who reached sixty only to find that they still felt … oh, perhaps thirty-two? Or did she feel younger still, say … twenty-five? Yes, twenty-five seemed just about right, Eve decided, as she confronted herself boldly in the well-lit mirror of her dressing table. She
made a rapid calculation. During her twenty-fifth year, her husband was serving as First Secretary of the French Embassy in Australia, her daughter Delphine was three years old, and her younger daughter, Freddy, christened Marie-Frédérique, was only one and a half. It had been a year of maternal worry she would choose never to live over again, she decided gratefully
.

Freddy and Delphine were both at Valmont, grown women with children of their own, women who had arrived at the château this morning, Delphine from Paris, Freddy from Los Angeles, so surrounded by husbands, children, nannies, and baggage, that only now could they be expected to have finished unpacking. Eve’s sons-in-law had promised to keep the children playing outside as long as possible. For the moment, no family members but Lancel women were in the château, and Eve felt an impulsive desire to be with her girls. She rang, and her maid appeared at the door of her bedroom
.

“Josette, will you please ask my daughters to come to my sitting room, and ask Henri to bring up glasses and champagne, pink, of course, the 1947.”

Neither of the girls would fully understand that a pink champagne from a superlative vintage year was the rarest sparkling wine ever produced on this planet, but it suited Eve’s mood to offer it to them without explanation. Dinner would be served unusually early tonight, since every one of her grandchildren who could sit upright at a table was included. Now, at five in the afternoon, a restorative glass of champagne was quite in order during the half hour that could be expected before the noisy return of the men and boys
.

Eve wrapped herself in a widely skirted, deeply flounced dressing gown of a special shade of pink taffeta, almost—if not quite—a flamenco pink that reflected all the slanting spring sunlight and returned her hair almost—if not quite—to the rare shade of blond it had been until a few years ago
.

She had … aged—for Eve realized that she must not shy away from that irritating yet necessary word—brilliantly
well.
Her finely wrought body moved with the distinction and natural grace of a woman who had grown to girlhood in those last years of the Edwardian era, when posture was nearly as important as the irrefutable beauty her parents had been careful never to praise. Eve raised her eyebrows high, as a private, half-mocking smile crossed her lips at the memory
of the long-lost innocence of those bittersweet days before the First World War
.

“Come in, darling,” Eve called to her elder daughter, hurrying from her bedroom to the sitting room. Delphine drifted in, wearing a sumptuous white silk robe, ordered, like all her clothes, from Dior, and subsided gratefully into a deep brocade armchair
.

“Oh, it’s so wonderful to be here,” she sighed, almost plaintively
.

“You seem just a bit frazzled around the edges, darling.”

“Oh, Mother
, why
do I have so many children?” Delphine exclaimed, obviously not expecting an answer. “Thank God the twins are ten and keep themselves busy—but the others! Paul-Sebastian and Jean-Luc have been fighting all day. If only this next one is a girl!” She patted her stomach hopefully. “Don’t I finally deserve a girl, isn’t that only fair?”

She looked up at Eve, as if her mother could guarantee a response to her question. Fatigue had not touched Delphine’s transcendent beauty. Nothing could mar the magnetic placement of her huge eyes, set so far apart beneath the calm shield of her wide forehead. Nothing could alter the way her lips turned up at the corners in an eternally mysterious smile, or the precise distance between her widow’s peak and the deliciously small shape of her chin that created the heart-shaped face millions adored. Delphine was the most famous movie actress in France. At thirty-eight she was in the flower of her career, for the rational French find a woman more fascinating after thirty-five than she is in the unripeness of first youth
.

“By now a daughter should be inevitable,” Eve replied, touching Delphine’s bell of brown hair in a brief, gentle caress
.

Henri brought in the tray of glasses and champagne. “Shall I open it, Madame?” he asked Eve
.

“No, I’ll do it, thank you,” she answered, waving him away. Tradition had it that the châtelaine of Valmont, the mistress of the house, should always be the one to open and pour the first bottle on any ceremonial occasion, and this private moment with her daughters was, for Eve, more ceremonial than the dinner tonight would be, no matter how gala
.

“Bathing her children. I can hardly believe that Freddy produced two little boys in less than two years. She’s certainly making up for lost time.”

“Couldn’t their nanny give them their bath?” Eve inquired
.

“Normally, yes,” Delphine responded with amusement. “That poor woman was dragged six thousand miles from California, but now Freddy can’t keep away from her own offspring.”

“Who’s taking my name in vain?” Freddy asked as she entered the room quickly, with the slight swagger that had always marked her springy walk. At thirty-six, her resemblance to a female Robin Hood was more vivid than ever. There was a spirited directness in her playful brigand’s eyes, a carefree jubilation in the way she was ready to attack any challenge, a moonbeam insouciance in her smile. She brandished a hairbrush. “Delphine, take pity on me. Do something, anything, about my hair! You’re so clever and you know I’m utterly hopeless.”

Freddy dropped lithely into another armchair. Her legs, clad in water-splashed white linen trousers, swung high over its upholstered side, sketching a brief, exciting arabesque in the air. Just from the way Freddy moved, Eve thought, you might guess that she had been born to fly any airplane ever built
.

Her daughter’s hair was as red as an old-fashioned, well-burnished copper casserole, so brash that it drew all eyes to her wherever she appeared, hair so intractably rebellious that no hairdresser had ever been able, to domesticate it. Throughout Freddy’s headstrong, headline-capturing career as one of the world’s great pilots, during all her daredevil, glorious years in World War II, only an aviator’s helmet had ever tamed that head of hair, and then only until the moment when she took the helmet off
.

Ashes and Ice by Rochelle Maya Callen
Sarah's Duke: and Ellie's Gentleman (The heir and the spare, book 1) by Fiona Miers
All Together in One Place by Jane Kirkpatrick
Sins of the Fathers by James Craig
Acts of Conscience by William Barton
To Snatch a Thief by Cotton, Hazel
A Thousand Years (Soulmates Book 1) by Thomas, Brigitte Ann
Heart of Clay by Shanna Hatfield
Saving Sara: Warriors Of Kelon Book 5 by Castle, Angela
Patchwork Man by D.B. Martin