Read Time Between Us Online 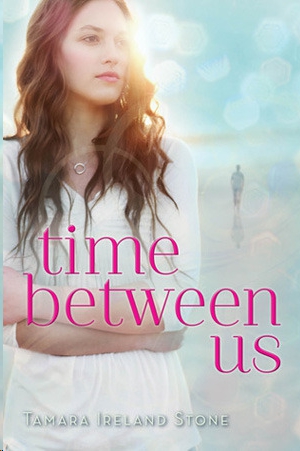 If I Could
words and music by Trey Anastasio copyright © by Who Is She? Music, Inc. (BMI)

All rights reserved. Published by Hyperion, an imprint of Disney Book Group. No part of this book may be reproduced or transmitted in any form or by any means, electronic or mechanical, including photocopying, recording, or by any information storage and retrieval system, without written permission from the publisher. For information address Hyperion, 114 Fifth Avenue, New York, New York 10011-5690.

For Michael, my daring adventure

Time is the longest distance between two places.

Even from this distance I can see how young he looks. Younger than the first time I saw him.

He and his friends have been skating around Lafayette Park for the last couple of hours, and now they’re sprawled across the grass, downing Gatorades and passing around a bag of Doritos.

“Are you Bennett?” I ask and wait for him to nod, even though I’m sure it’s him. I’d know him anywhere. “Can I speak with you for a moment? In private?”

He knits his eyebrows together, but then he stands up and flips his skateboard over to keep it from rolling down the hill. I catch him looking back at his friends and shrugging as he follows me to the closest bench. He sits at the opposite end, as far away from me as possible.

Everything about him is so similar, so familiar, that I almost scoot over to close the distance, like I would have done so naturally when I was younger. But sixteen years have come between us, and that’s enough to keep me on my side of the bench.

“Hi.” My voice shakes, and I twist a curly strand of hair around my finger before catching myself and returning my hand to my sides, pressing both palms into the wooden slats.

“Ummm…Hi?” he says. He studies me through the uncomfortable silence. “I’m sorry, am I supposed to know you or something?”

My instinct is to say yes, but I stop myself, press my lips together, and shake my head instead. He doesn’t know me. Not yet. “I’m Anna. Here.” I reach into my bag, pull out the sealed white envelope, and smile as I hold it out to him.

He takes the letter and turns it over a few times.

“I thought it would be safer to explain in writing.” My next words are the most important. After all my practice, I should have this part perfected, but I think through each word in my head again, just to be sure. “It’s too easy for me to say the wrong thing today, and if I do, we may never meet at all.”

His head springs up, and he stares at me, wide-eyed. No one’s ever said anything like that to him before, and with that one statement, he knows that I’m in on his secret.

“I’d better go.” I stand up. “Read that when you’re alone, okay?” I leave him on the bench and walk back down the hill. I keep my eyes glued to a single sailboat skimming across the San Francisco Bay so I won’t turn around. After years of agonizing over this moment, I expect to feel relieved, but I don’t—I just miss him all over again.

What I just did could change everything, or it could change nothing. But I have to try. I’ve got nothing to lose. If my plan doesn’t work, my life will remain the same: Safe. Comfortable. Perfectly average.

But that wasn’t the life I originally chose.

I shake out my arms to get the blood flowing, rock my head back and forth until I hear a little pop, and take a deep breath of early morning air that’s so cold it stings on the way down. Still, I muster a silent thanks for the fact that it’s warmer than last week. I tighten the neoprene belt that holds my Discman around my waist and turn up the music so Green Day is loud in my ears. And I’m off.

I take the usual series of turns through my neighborhood until I reach the running path that hugs the glassy expanse of Lake Michigan. I twist around the last bend, giving myself a clear view of the route all the way to the Northwestern University track, and I spot the man in the green vest. As we run toward each other, our ponytails—his gray, mine unruly—swing back and forth, and we raise our hands and give each other a little wave. “’Morning,” I say as we pass.

The sun is slowly rising over the lake as I turn toward the soccer field, and when my feet connect with the spongy surface of the track, I feel a new burst of energy that makes me pick up the pace. I’m halfway around the loop when the CD shuffles again and the new song transports me back to the coffeehouse the night before. The band was amazing, and when they played those first few notes the whole place exploded, everyone bouncing and head-bobbing in unison as the line that separated us local high schoolers from the transitory college students disappeared completely. I take a quick look around to be sure I’m alone. All I can see is empty row after row of metal bleachers, heavy with a winter’s worth of snow that no one’s bothered to dust off, so I belt out the chorus.

I’m racing around the curves, legs throbbing, heart pounding, arms pumping. Inhaling arctic air. Exhaling steam. Enjoying my thirty minutes of solitude, when it’s just me and my run and my music and my thoughts. When I’m completely alone.

And then I realize I’m not. I see someone in the bleachers, hip-deep in the icy fluff of the third row and impossible to miss. He’s just sitting there with his chin resting on his hands, wearing a black parka and a small smile, watching me.

I steal glances at him but continue to run, pretending not to care about his presence in my sanctuary. He looks like a Northwestern student, maybe a freshman, with dark shaggy hair and soft features. He doesn’t look threatening, and even if he is, I can outrun him.

But what if I can’t?

My mind jumps to the self-defense courses Dad made me take when I started running in the near dark. Knee to the groin. Palm thrust to the nose. But first, you should try to avoid confrontation by simply acknowledging the attacker’s presence. Which sounds much easier.

As I come around the bend, I give him a slight nod and a glare that probably conveys a weird mix of fear and tenacity—like I’m daring him to make a move but terrified that he just might. And as I run by, staring him down, I watch his face change. His smile disappears, and now he looks sad and dejected, like I just used those self-defense skills to punch him in the gut.

But as I follow the curve of the track and start heading toward him again, I look up, right in his direction. He gives me a more hesitant smile, but it’s warm, like he knows me. Genuine, like he might just be someone worth knowing. And I can’t help it. I smile back.

I’m still grinning as I turn the next bend, and without even thinking about it, I flip around midstride to look at him again.

I spin in place while my eyes search the track for him, and then I sprint to the bleachers. At the bottom of the steps, I hesitate for a second, wondering if he was ever there at all, but I gather my courage and trudge up.

He’s not there, but he had been. He left proof: the snow is packed down where he sat, and on the bench below, two depressions show where his feet rested.

And that’s when I notice something else.

My own footprints are clearly visible in the powder around me, but where his should have been—leading to and from the bench—I see nothing but a thick layer of untouched snow.

Dark Rising by Greig Beck
Bad Girls in Love by Cynthia Voigt
A Shortcut to Paradise by Teresa Solana
Immortally Ever After by Angie Fox
Master of the Mountain: Thomas Jefferson and His Slaves by Henry Wiencek
Miss Firecracker by Lorelei James
A Perfect Bride For Christmas by Dyann Love Barr
The Bushwacked Piano by Thomas McGuane
unForgivable (An inCapable World Novel Book 2) by Sara Hubbard
Janette Turner Hospital Collected Stories by Janette Turner Hospital