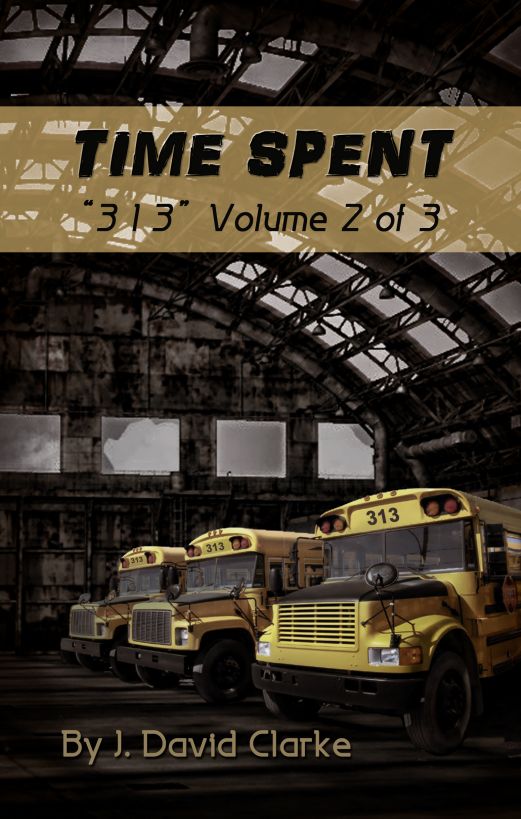 Cover design by Kimi A. Phillips

The Rubberband Man and Other Stories

The Wizard in My Window (coming soon)

Keeper of Days I: The Book of Day and Night
(coming soon)

From Amazon reviews for
MISSING TIME

"Looking forward to what
happens next!"

"One of the most thrilling
books I have read in a long time!"

"...combines suspense,
drama, wit, deception, with a hint of passion."

Prologue: "You don't forget the end of the
world."

One: "More super than super."

Four: "Is there anything you care
about?"

Eight: "Look at the prideful man and see
him humbled."

Ten: "Is this really happening?"

Epilogue: "The power of time."

TIME SPENT is Vol. 2 of a 3 part story
called "313".  Volume 1, MISSING TIME, was a story told in 13
parts.  The story concerned a group of high school kids who
were involved in a school bus crash.  They discover that since
the crash they possess special powers.  Each of them remembers
something different about the crash, and none of them is entirely
sure what happened.  They also discover that a military group
is hunting them down one by one. If you have not read MISSING TIME,
I highly recommend you do so before proceeding with this
volume.

I wish to thank everyone who bought, read,
enjoyed, and supported MISSING TIME. I truly appreciate you.
Without your invaluable support this volume would never have been
completed.

Keep reading. We've got a long way to go,
and a wild ride still ahead. Enjoy!

Prologue
"You don't forget the end of the
world."

Sugary sweet pop music floated down from the
speaker on the ceiling above: Taylor Swift breaking up with yet
another boyfriend, and singing to the world about it.

The nail technician droned on about baby
daddy drama of some utterly ridiculous kind while applying polish
to Becca's toes. Becca resisted the urge to reach out with her mind
and silence the woman. Cindy? Candy? She had forgotten her
name.

She feigned listening, but her mind was
elsewhere. She risked only quick, furtive glances toward the door
to the salon. Her quarry was late.

"Hang tight, Miller, we have a possible
target incoming,"
said a voice over the earpiece in her right
ear. A slim cord connected the earpiece to a device on her back,
hidden by the long blonde hair that hung down over her ear.

"I know right??" said Cindy/Candy, assuming
Becca was speaking to her. "He's such a dudebro, I swear!"

The door to the salon opened.

A man walked in, his face concealed by the
shadow of the gray hoodie he wore. He had dark brown skin (she
could tell from his hands), medium height and build. He stopped
just inside the door as the little chime sounded. The door swung
slowly closed as he stepped forward and looked around.

Becca didn't reply. Again, she resisted the
impulse to take over the man's body and force him to lift his
hood.

"Hello," the salon manager, a slim Asian
woman in her mid-forties, greeted him, "can I help you, sir?"

He spotted Becca at the back of the salon.
He pushed past the manager and walked toward her quickly.

"Shit," Becca said, recognizing him. "What
the fuck is he doing here?"

"No, wait!" Becca said, jumping to her feet,
but it was too late.

Agents burst in the front and back doors,
turned around from where they had been sitting at nail stations,
hair stations, stood from the waiting area. All drew their weapons
and surrounded the man in the hoodie.

She reached across him and yanked the hood
back, revealing Kevin's bald head, clean-shaven face and
penetrating brown eyes.

"Not long enough," she said.

Kevin put his hands down. The agents tensed,
but held their fire.

"These men," Kevin said, "Are you using your
powers on them?"

Becca grinned. "They're with
me!
" She
took out her badge and showed it to him. Kevin nodded.

One of the agents, who had come in the back
door to the salon, approached Becca from her right. "Powers? What's
going on, Miller? Who is this and what is he talking about?"

Kevin was silent, waiting for her to
answer.

"Someone I really hoped I'd never have to
look at again," she said, putting her badge away.

"I didn't think you would," Kevin said. "But
it's important. You remember the last time I saw you?"

Becca rolled her eyes. "You're kidding,
right? Um, yeah. You don't forget the end of the world."

"The world," Kevin said. "And it's closer
than you think."

Becca reached into her purse. "Sorry, I'm
gonna need a cig if I have to deal with this."

She raised an eyebrow. "Seriously? That's
the part of all this that bothers you?"

Kevin sighed, glancing around at the armed
agents who surrounded them. She had a point.

"Do you think you could get them to lower
their guns?" he asked.

"Cigarette first," Becca said, holding it
between her lips and raising her lighter to it.

"There's kind of a time factor here," he
said.

"Isn't there always?" she asked in a nasal
voice as she held back, then released a billow of smoke. Once she
was satisfied, she nodded to one of the men. They lowered their
guns, but stared warily at Kevin.

"Okay, now why the fuck are you here? After
what happened," her thoughts turned to the rooftop, the crack in
the sky, but she quickly pushed aside the image, "you said it was
dangerous for us to be together."

Becca rolled her eyes. "What else is
new?"

"I can feel you in there, you know," Kevin
said, "scrabbling around in my head. You know that doesn't work.
Nothing works on me."

Becca gave him an odd look. "You what? I'm
not doing anything."

Kevin raised a hand to his throat, and made
a choking sound. He looked around the salon, at Becca, the agents
who surrounded them, then behind them through the plate glass
window.

"What the fuck?" Becca asked.

Kevin turned back to her, a terrified look
on his face. "She's here."

Kevin convulsed, a terrible dry heave
emerging from his mouth. He heaved again, and again, and then
collapsed backward.

"Jesus!" Becca said, her cigarette slipping
from her mouth.

Two of the agents stepped forward, kneeling
over Kevin as his body continued to convulse on the floor. Kevin's
mouth yawned wide, and first one, then another tiny form
emerged:

More and more poured forth, emerging in a
dark funnel. The sound of their buzzing filled the salon, and men
and women swatted at them, backing away from Kevin. Some ran out
the front, some out the back. Some cowered in fear at their hair
and nail stations.

Becca backed up as the bees spread out. Soon
they filled the room, getting in her nose and ears. She moved back
into a small room with chairs whose backs leaned into wall-mounted
sinks. There was a door with a glass window separating the two
rooms.

"Miller," the agent who had spoken before,
Michaels, called. She looked back to see he was swarmed with bees,
they were clogging his mouth and covering his eyes. Becca reached
out to grab his hand but he fell to his knees, then flopped onto
his face. His back was a writhing, buzzing mountain.

She slammed the door and watched as the last
of the agents ran from the salon, swatting at the massive swarm
that clogged the air.

Becca sat on one of the shampoo station
chairs, and casually pulled another cigarette from her back. She
held the cigarette between her lips and lit it, as the glass door
grew opaque with the writhing forms of the bees.

"Boom!" he cried, manically pressing the
dual keypads of his PSP with his thumbs. "Yes! Yes! Oh, dang. Crap!
YES!" So lost was he in his game, Brandon failed to noticed the
girl approaching him from the other direction.

She had short brown hair, with bangs on her
forehead and a lock pulled over each ear. She wore thick glasses,
which slid low on her nose, and she was clutching an open paperback
in her hands, just as lost in it as Brandon was in his game.
Brandon's typically unruly mop of brown curls was even longer than
usual, which combined to block his view of the world around him,
and the girl's approach.

"That's it!" Brandon said, pulling off a
combo of attacks. "There it is! There it is! Oh yeah!"

PSP and book collided as the two were in
mid-stride and the paperback went tumbling to the ground, along
with the girl, who ran directly into Brandon's hands and lost her
footing. She fell backward onto her backpack with a thump.

"Oh!" Brandon exclaimed. "Sorry! Sorry!" He
shoved the PSP into a pocket and reached out a hand to help her
up.

Brandon hauled her to her feet. "You
okay?"

"Yeah," she said, brushing the seat of her
brown skirt.

"This yours?" Brandon said, leaning down to
pick up the book.

"The Hunger Games," he said, noticing the
book's cover. "I haven't read it, any good?"

"Cool. I've heard about it, really want to
check it out sometime."

"Well maybe you can borrow it when I'm
done," she said.

"What grade are you in?" she asked.

"Nice to meet you," he said, smiling.

"You too. I love your Blue Lantern shirt, by
the way!"

"Oh!" Brandon looked down at his shirt and
beamed. "Thanks! Yeah, power of hope!"

The courtyard began to fill with milling
students, heading from one set of double glass doors to the
other.

"It was nice meeting you, though," he
said.