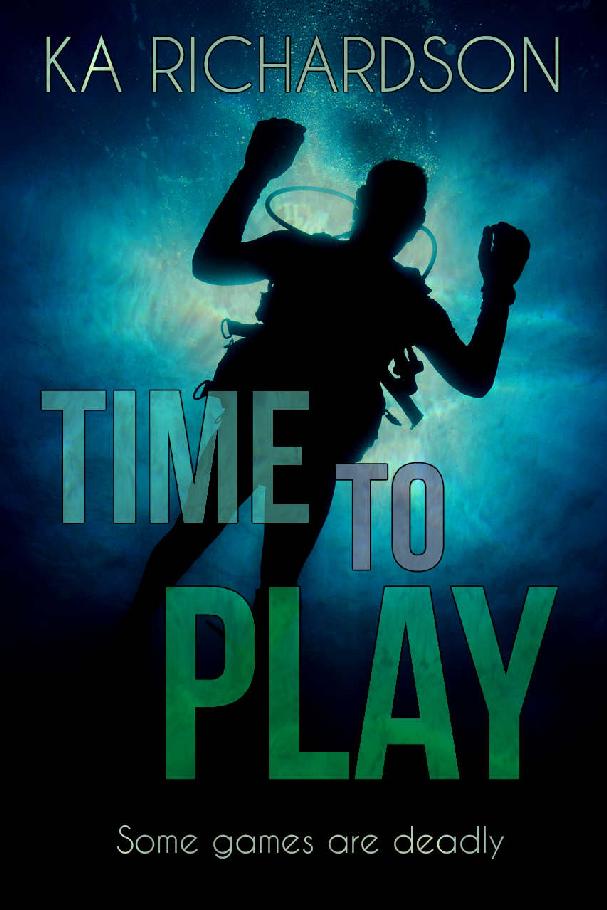 The right of K A Richardson to be identified as the Author of the Work has been asserted by her in accordance Copyright, Designs and Patents Act 1988.

First published in 2016 by Bloodhound Books

Apart from any use permitted under UK copyright law, this publication may only be reproduced, stored, or transmitted, in any form, or by any means, with prior permission in writing of the publisher or, in the case of reprographic production, in accordance with the terms of licences issued by the Copyright Licensing Agency.

For my best friend, Claire – for keeping me grounded and always believing.

It was cold and cramped. The young girl shifted position, trying to stop the spade digging into her back.

But she wasn’t. Because she knew if she’d stayed in the house he would have come for her. And he would have done far more than just touch her leg this time.

She’d been in the foster home now for the total of three weeks and four days – the longest she’d ever been in one place that wasn’t a group home. If she told on her foster mother’s boyfriend then that’s where she’d end up again. The four-to-a-room home where the noise never stopped. Surely this was preferable? Even with Chris’s roaming hands and his gravelly voice giving evidence of his thirty-a-day habit.

The tears fell down her cheeks.

She really couldn’t cope with him touching her.

It was how she’d ended up in the shed with the woodlice and spiders.

She stared through the open shed door at the kitchen window. It felt like she’d been in there for ages. In reality it hadn’t even been half an hour. How was she supposed to sleep here? There was nowhere to lie down.
Can you even sleep sitting up?

She wiped the tears away with the back of her hand. This was her decision. She’d just have to be grown up and deal with it. Just like she dealt with everything else. She was eleven now. As of today she was practically an adult. Ann had even been nice and made a party tea with a birthday cake – her first ever cake. She had presents too.

She should have been happy.

But Chris’s wandering hands had made her so upset she’d thrown up all the nice cake and sandwiches. She’d made a decision when she was in the bathroom that if that’s what birthdays were about then she didn’t want any more.

Her eyes narrowed as a flash of orange appeared in the kitchen window. The lights danced and moved and it took her a moment to realise that the kitchen was on fire.

Oh my God. That was me. I left the candle burning near the window so I could still see it from out here. Ann will get hurt. It’s all my fault.

The candle was Chris’s rule – no wandering in the house putting lights on at night.

The girl got to her feet and stood in the shed and stared as the flames started burning harder. What should she do? What
could
she do?

Taking a deep breath she ran to the back door, and flung it open, intending to run past the fire and shout for Ann. The flames flew towards her with a `whoosh’ and she knew she wouldn’t get past.

She was going to run to the front of the house but the fire alarm suddenly started squealing.

That would alert Ann. She knew that.

So she backed away, and curled up on the floor of the shed with tears streaming down her face.

She’d done this. It was her fault.

He bent down at the cage door and glanced inside.

The girl was curled up in a ball, her eyes closed. He knew it had taken her a while to fall asleep, her belly was empty of food and fear inhibited the natural instinct to rest. He purposely hadn’t fed her much in the two days she’d been his.

He smiled because he knew hunger gave them an edge, kept them more alert. And when they were alert the pain they felt became more acute.

Normally they lasted a few months in his care, each experiment different to the last. Their eyes, so terrified to start with, slowly grew accustomed to the tests and they eventually became accepting. To a point anyway. Their screams lessened, the pain grew less acute, but eventually he pushed them too far and they died.

Such is life. Everything dies
.

Once their screams lessened, he started to get bored, began looking for the next experiment. The lack of screams meaning they were finally becoming accustomed to the pain, which was, after all, the whole purpose of the experiment.

It wasn’t that time yet, though, this one still had plenty of fight in her. Plenty of time to realise he was trying to teach her that life was pain, and to accept the fact.

Standing upright, he reached for the metal bar that was sitting on top of the cage. He felt his heart quicken as he ran the bar across the cage loudly.

‘Time to play,’ he said softly, as the girl jerked awake with a gasp. She shot to her knees, huddled in the furthest corner from the cage door, and started begging. Her native tongue made no sense to him.

He slipped the bolt to one side, reached in and grabbed her arm, tugging hard until her body followed. She was crying now, and she tugged back from his grasp.

His anger simmered. He would make her understand that pulling wasn’t allowed.

Forcibly, he placed her into the chair in the centre of the room and secured her hands and feet silently. Placing a section of material over her mouth, he tightened it and knotted it at the back. Then he stood back and stared.

This one was a beauty.

He hoped she would last.

Depressing the record button on the camera set up on a tripod in the far corner, he began to speak. ‘Subject six. Day three. The bruising from day one’s injuries is starting to yellow at the edges. When ejected from the cage today, the subject has been reluctant and screamed. She sits before me now, shaking but still somewhat defiant. She doesn’t understand the rules of the game yet. Today I will break three bones. She will receive minimal pain relief and then will be fed this evening for the second time.’

Turning towards the girl, he grabbed the thumb on her left hand and forced it backwards, waiting for the crack to reverberate around the room. As it sounded, the girl screamed loudly through the gag, her breath laboured and staggered as she gasped through the pain he knew was now shooting up her arm.

He liked doing them quickly, before the body had time to adjust to the pain sensations and become accepting. Clenching his fist, he slammed it hard into her nose, listening as it crunched and blood spurted forth from the girl’s nostrils.

Her eyes lolled back in her head as a steady stream of the red liquid fell from her nose. She was almost unconscious.

‘Last one,’ he whispered, his hand stroking the back of her hair gently.

Kneeling down, he took hold of her left ankle and gave it a sharp twist. It was too much for the girl, whose body went limp and sagged in the chair.

The third one always made them pass out.

Untying the restraints, he placed her back inside the cage, put a sandwich and a bottle of water, and a strip of paracetamol beside her, and locked the cage door.

‘I’ll be back in two days, sweetness. Then it’ll be time to play again.’

It had been a good night.

Grant Cooper, or GC as he was known to his friends, had been out since early afternoon. He’d managed to drink his weight in alcohol, draining dregs from half-empty glasses and swiping drinks when people weren’t looking. What little money he’d had had been spent on some E tablets. At some point during the evening he’d even managed to slip a pair into the drinks of a couple of lasses. He’d laughed hysterically from his perch in the corner of the bar as the effects had set in and the girls had gotten high.

Now though, he wished he hadn’t wasted the pills on girls he didn’t even know. It felt like he’d been walking forever. The city centre of Durham seemed so far back it might as well have been in another country. The winding road to Shincliffe was like a marathon tonight. And he was tired.

The effects of the drugs and alcohol were wearing off, not that it was obvious as he stumbled his way down the road towards the lights of the village ahead.

He finally made it to the edge, then veered left into one of the side streets. As he neared his destination he felt anger bubble to the surface.
Who the hell does she think she is, dumping me? Stupid bitch even phoned the cops on me last week.
He chose to ignore the fact the police had also told him to stay away from the address or risk getting locked up again.
What the hell do they know anyway?

He couldn’t stay away. Stevie-Lea
owed
him an explanation. It wasn’t even that she was good in the sack; he’d told her she was every time they’d had sex, knowing in his wise nineteen-year-old heart girls needed to be told all the time. It was that she was
his.
The few times he’d lost his temper and lashed out at her were her fault anyway; she’d always taunted him and pushed his buttons.

He stumbled up the path and started banging loudly on the door. ‘Stevie-Lea, open the door. It’s me, GC, Stevie!’

He heard her open the bedroom window, and she leaned out and yelled, ‘What the fuck are you doing, GC? Go the fuck away.’

‘Stevie, please. You owe me an explanation,’ whined GC, looking up at her.

‘I owe you fuck all. Now naff off. You’ll wake the whole bloody village.’

She slammed the window shut and GC felt his rage burn. He hadn’t heard the whisperings she shared with her new boyfriend upstairs – there was no way he could have – but he was fuming. How dare she just dismiss him like that?

He lost his temper, slamming his fists on the front door and screaming her name over and over.
Wake the whole village? I’ll wake the whole bloody city, you selfish cow.

As the front door opened suddenly, GC tipped forward and almost lost his balance. He grabbed the side of the door and stood slowly, plastering a grin on his face. ‘Knew you’d come round.’

As GC’s eyes connected with the man at the door they widened in shock, realisation taking a moment to dawn.

‘Name’s Kyle. Stevie-Lea told you to fuck off. Now I’m telling you. And I’ll say it real slow so you can understand. FUCK … OFF.’

‘And who are you? Man-fucking-mountain?’ GC squared up to the male in the doorway, his chest stuck out as he waited for a reply.

The man didn’t speak, he moved quickly instead, his fist connecting with the side of GC’s jaw like a bumper car at the fairground. GC felt his head spin around and his legs go beneath him as he flew backwards and landed hard on his backside. He heard the door slam as he lay there looking up at the stars above.