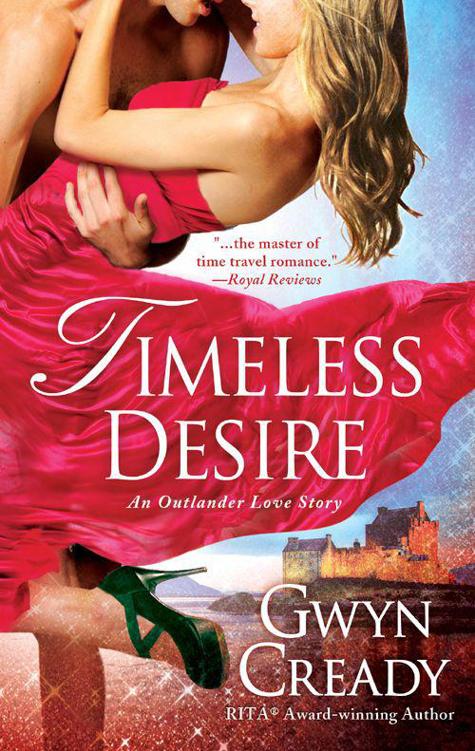 “A joy. Cready is an author worth watching.”

“Time travel has never been so much fun.”

“Rip its sexy, white shirt off and have your way with it.”

“Entertaining and lively . . . a compelling romance that will leave readers breathless.”

“Take a wonderful jaunt through time with some likeable characters and excellent humor.”

“Gwyn Cready is the master of time travel romance.”

This is a work of fiction. All characters and events portrayed in this novel are either fictitious or are used fictitiously.

All rights reserved, including the right to reproduce this book or portions thereof, in any form under the International and Pan-American Copyright Conventions. Published in the United States by:

This is for the devilish, determined, and deeply vexing boy who, as if by some other worldly magic, grew into one of the most hardworking, steadfast, and honorable men I know. Wyatt, I couldn’t be prouder.

“I just think librarians are the glue that helps stick a community together,” Marie said, clasping a hand over her heart as she said it. “We’re on the battle lines of community involvement.”

“Really? That’s what you think?” Panna gave her fellow librarian an amused look and handed the young patron standing before them his copy of
Animal Farm: The Graphic Novel
, now gum-free. “Well, I don’t know about battle lines, but sticky certainly seems to be a part of it.”

Panna’s eyes went automatically to the always dashing Colonel John Bridgewater, Viscount Adderly, or a least a marble facsimile of him, standing heroically astride the statue base, sword at his side, ready to charge into the Battle of Ramillies. It did seem rather odd to have a larger-than-life statue of an eighteenth-century British war hero in a small-town library in western Pennsylvania. One might expect Andrew Carnegie or, more likely, Mike Ditka or Honus Wagner, both of whom had been born in Carnegie and were more in keeping with Pittsburgh’s sport-loving, blue-collar sensibilities. But one of Bridgewater’s descendants had been a huge donor at the library’s founding a hundred years earlier, and the statue had been his stipulation. Bridgewater, with chiseled profile, shoulder-length waves and closely fitting breeks, had for Panna always called to mind a slightly more battle-tested d’Artagnan, that handsome, brave hero of Alexandre Dumas’s
The Three Musketeers
, one of her favorite books. But there was something so magically lifelike about the man—as if he might jump off his pedestal at any moment and pull her roughly into his arms, damning the eyes of anyone who might object to a good-bye kiss in the middle of the periodical section. Suffice it to say, Bridgewater had loomed large over Panna’s daydreams as well as her seat at the circulation desk, especially in the last two years.

Marie, who had caught the direction of her coworker’s gaze, said, “Have you ever noticed that from just the right angle, it looks like he’s carrying a rolled-up stack of interlibrary loan requests in his pants?”

“Oh, right. Tell me that isn’t why you always pick this seat.”

Marie was a petite brunette in the second year of a master’s program in library science who still got misty-eyed at the idea of municipal services. Panna, on the other hand, had been working the stacks for eleven years, six as head librarian, and was able to boil her learning about librarianship into two golden rules: First, in a world where your job is interacting with the public, you get back what you give. And second, avoid Friday-night shifts at all costs.

“Yikes!” Marie flipped up the swinging counter on the circulation desk and tore off.

Mr. Albert read the
Pittsburgh Post-Gazette
, the
New York Times
and the
Washington Post
at the library every day. He also liked to take pictures of women’s feet.

Panna turned to the next patron in line, a lovely regular in her late seventies named Mrs. Olinsky, who had been trying to set Panna up with her youngest son for months.

Panna gave the elder woman an inquisitive frown. “You don’t seem to have any books to check out.”

“My son’s outside in his Mercedes and wonders if you could come out to give him a recommendation on a book. It’s a new Mercedes.”

“Mrs. Olinsky, we’ve talked about this before.”

Mrs. Olinsky’s shoulders sagged. “I know, I know. No dating yet. But don’t wait too long. A nice young woman like you shouldn’t be alone.”

No, she probably shouldn’t. Thirty-four was still young. But since Charlie’s agonizingly slow death two years earlier, she felt about as old as Mrs. Olinsky. Panna’s heart had gone into a hibernation from which it felt like it would never awake. The world of dating seemed about as far away as the Battle of Ramillies and about as much fun, which was why she wasn’t looking forward to the blind date Marie had set up for her that night.

Marie bounded back behind the large, U-shaped circulation desk, waving a camera. “Found him. I told him we’d put this away until he was on his way out.”

Panna gave the woman a firm look. “If he
really
needs a recommendation, you can tell him I’ll be out in a minute.”

Mrs. Olinsky cast her eyes downward. “I guess he’ll be all right on his own.”

When Mrs. Olinsky disappeared, Marie grinned. “Still working on you, isn’t she?”

“Oh, yes. But so far not succeeding.”

“She doesn’t have the determination I do. To scale the Panna Kennedy castle wall, one needs tenacity, innovation, and a carefully crafted—oh, Panna, what is it?”

An uninvited tear had striped Panna’s cheek, and she swiped at it in irritation. “It’s the dinner tonight. I just . . . I know I should do it. I
know
I should. And I will. It’s just I feel like it’s going to be awful and hard . . . and wrong. I’m sorry.”

Marie put her arm around Panna’s shoulders and squeezed. “Hey, it’s fajitas with me and Kyle and Kyle’s cousin, Steve, not two hours at the Quality Inn.”

Panna snorted through her sadness. “I know. And I
want
to do it. I swear.”