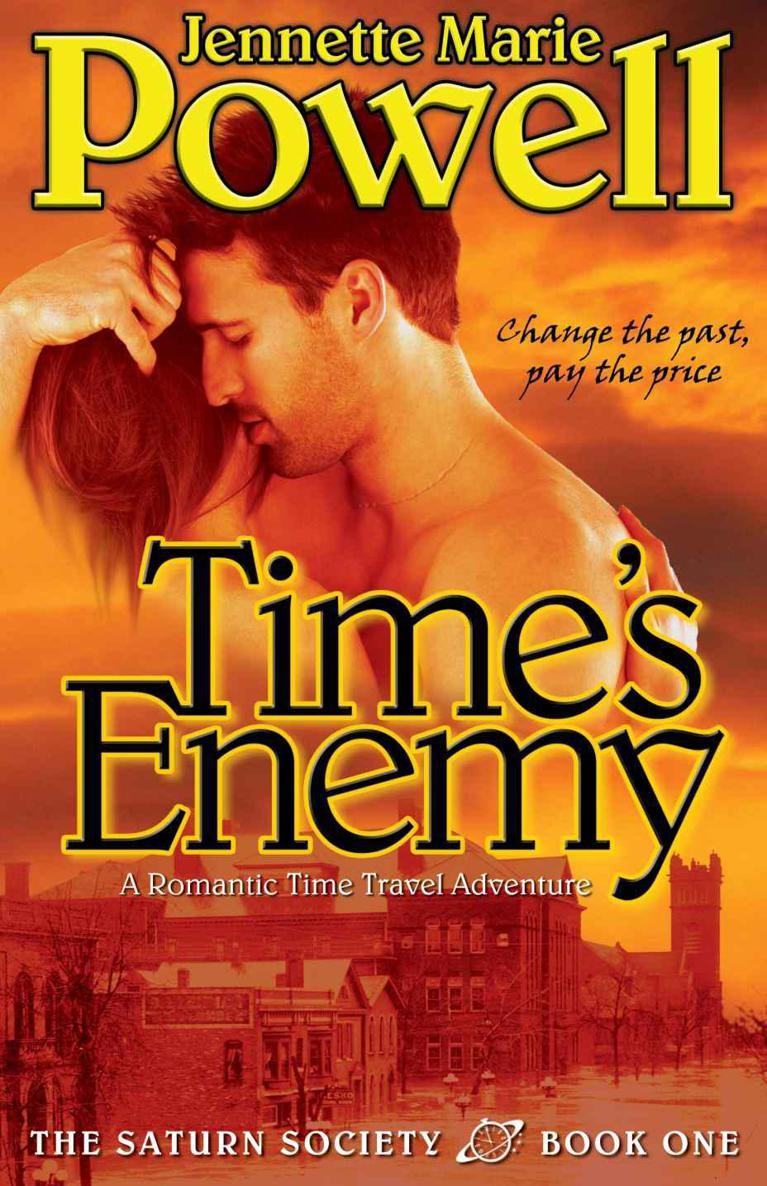 Tony Solomon never wanted to be a time traveler. But a brush with death leaves him a time traveler—and an unwilling initiate in the Saturn Society, a secret society of those with his ability.

Tony vows to use his gift to prevent his daughter’s murder—if he could figure out how. Never mind that this violates the Society’s highest law, branding him an Enemy for a crime he has yet to commit. Determined to thwart the Society, he seeks help from Charlotte, the woman whose life he saved decades before he was born.

One chance to make things right…

Tony jumps to 1933 in search of answers, but lands on the wrong side of the Society, a fugitive on the run. Thrilled, yet terrified to see her childhood hero, Charlotte offers him sanctuary…and unexpected love. But Charlotte hides a terrible secret: loyal to the Society, she must bring to justice those who manipulate time for their own gain. By sheltering Tony, she faces a terrible choice: condemn the man she loves and to whom she owes her life, or deny her deepest convictions by helping him escape, and risk sharing his sentence.

Not your typical time travel romance,
Time’s Enemy
creates a wonderful blend of romance and science fiction, an exciting adventure through time rich in action, romance, and history.

What reviewers are saying about The Saturn Society series:

“I could not put it down. The characters were clear and well-drawn. The popping in and out of eras and changes in the surroundings...failed to confuse me. That says a lot for the skill of the author.”
— Maggie,
Coffee Time Romance and More

To get your complimentary copy of Time's Holiday, tap the button above, or go to
www.jenpowell.com/book-offer

T
HE DAY THEY WENT TO
C
HICHÉN
I
TZÁ
started no differently than any other day on vacation, yet Tony Solomon felt a numbing unease, the kind that sometimes came on when something bad was going to happen.

No way in hell was he going to go up that big pyramid. It’d be just his luck to fall and kill himself.
El Castillo
had existed for over a millennium without him climbing it, and it could stay that way.

Puffy clouds dotted the brilliant blue, February sky, and shimmers of heat rose from the meadow beyond the small copse of trees where Tony stood as his seven colleagues passed. A sidewise glance caught the eye of Violet Sinclair, who’d stopped a few feet away. The computer technician had won the company’s charity raffle, with a spot on the executives’ annual trip to Cancun as the prize. She looked away, as if Tony had caught her doing something she shouldn’t.

Charlie, his brother-in-law and coworker, smacked his arm as he walked by, jerking Tony’s attention off Violet. “Hey, Solomon, you coming?”

No way was Tony climbing those ninety-one steps—according to their tour guide—to stand on that narrow, unrailed platform atop the pyramid. “There’s a reason that thing’s closed to the public.” Like people had died there. He couldn’t imagine how Keith, their boss and CEO of the company, had managed to arrange a private tour of the site, which included permission to climb the pyramid.

Charlie stopped. “Everyone else is going.”

If everyone else jumped off a bridge, would you?
Tony put on his poker face. “You wouldn’t expect Lisa to go up there.”

“Lisa’s not here.” Tony’s sister had been unable to take the week off from her job. Charlie stepped closer, a wide grin splitting his face. “Who knew? The guy who has no problem telling the boss his idea sucks, is afraid of heights.”

“I told Keith the truth.”

“A move like that would’ve gotten anyone else fired,” Charlie said.

Tony couldn’t argue. For some reason, the CEO had always respected his sometimes-brutal honesty. If lying to appease the boss was what it took to move up, or even remain employed, Tony didn’t want the job, though he’d been more diplomatic in the meeting that morning than to say Keith’s idea
sucked
.

Charlie started toward
El Castillo
then stopped. “You coming, or you too chicken-shit?”

Tony felt Violet’s gaze on him again. If she didn’t like heights either, she’d be his excuse to stay on the ground.

He’d invited her along when his wife Dora claimed she had a headache, and suggested he ask “that chubby girl from I.T.” to take her place on the excursion. For Tony, Keith’s plans to visit the ruins were a welcome departure from routine—hanging around the resort while Dora sunbathed, leaving himself with too much time to think.

“What about you?” he asked Violet.

“Are you joking? This is the chance of a lifetime. If I don’t go, I’ll always regret it.” She twirled a lock of her long, blond hair around her index finger. A tiny breeze shifted the branches above to allow a shaft of sunlight to slip across her face, illuminating her golden brown eyes like a jar of honey sitting in a sunny kitchen window.

Charlie smirked. A good-natured smirk, but a smirk nonetheless.

Violet unwound the hair from her finger as Keith appeared beside Tony. The CEO clapped Tony on the shoulder. “Don’t worry, we’ll catch you if you fall. Right, Violet?”

Her words echoed through Tony’s mind, drowning out her response.
If I don’t, I’ll regret it.
“What the hell,” Tony muttered as the three started across the meadow.

As they walked, Violet sneaked a glance at Tony, then dropped back so he wouldn’t notice her staring at him.

Him.
Tony Solomon. After three years with the company, it was the closest they’d ever been without a desk and computer between them. Her first chance to have a conversation with more depth than the usual “What were you doing when the computer stopped responding?”

Three years of watching him whenever he walked through the tech support department to get a cup of coffee, of hearing his polite “Thanks, Violet,” when she reset his password—which he forgot every time he was forced to change it. Three years of thinking of ways to put herself in his path at the office to get another glimpse of his face. Three years of longing, of trying to figure out the mystery of why something about him seemed... familiar, when nothing else did in the few, short years she could remember.