Read To Catch a Mermaid Online

To Catch a Mermaid 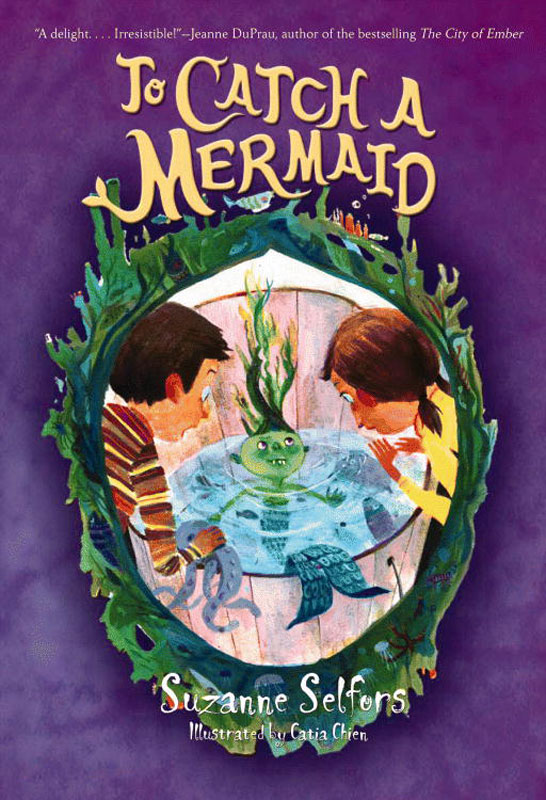 Chapter One: Friday the Thirteenth

Chapter Seven: The Thing on the Bed

Chapter Twenty-fi ve: The Sons of the Vikings

Chapter Twenty-nine: The Calm After the Storm

I feel very fortunate to have two excellent critique groups. Thanks to Carol Cassella, Dennis O’Reilly, Jonathan Evison, Anjali Banerjee, Sheila Rabe, Elsa Watson, and Susan Wiggs for reading the first draft. Thanks also to my hardworking agents, Kate McKean and Michael Bourret, and to my editor Jennifer Hunt and her assistant, T. S. Ferguson, and the staff at Little, Brown Books for Young Readers. Much appreciation to author Michael Collins, for always lending a sympathetic ear.

On the home front there’s my mother, Marilyn, who deserves a big thank-you for being overwhelmingly supportive and downright fabulous. My father never got the chance to read this story, but I channeled his spirit when I created the character of Halvor. And I couldn’t ask for a more enthusiastic audience than my children, Walker and Isabelle, and my niece, Maxine.

Finally, immeasurable gratitude to my husband, Bob, who could have said, “Are you nuts?” when I told him that, at age 39, I was going to start writing. But instead he said “Go for it.” So I did.

—A very observant person with a magnifying glass B
oom Broom awoke to find his little sister, Mertyle, looking for spots.

“It’s a good day for spots,” she announced, examining her knobby knees with a magnifying glass. While Boom rubbed sleep from his eyes and stumbled out of bed, his sister made up another ridiculous excuse for not going to school.

Last week she had suffered from orange tongue, thanks to an ancient Popsicle found at the bottom of the freezer. The week before, she had come down with ringing of the ears. “Could somebody answer that phone?” she had repeated whenever anyone walked into the room. Since the beginning of the school year, Mertyle had faked over sixty ailments including the common cold, yellow fever, weakness of the eyebrow, and nostril fungus. She had even claimed brain farts.

“Brain farts? That’s just a saying for when you’ve done something stupid. No one’s brain actually farts,” Boom had pointed out.

“Well, mine just did,” Mertyle had insisted, muffling her head with a pillow. “It’s embarrassing and I don’t want to go to school and have it happen in front of the entire fourth grade.”

Mertyle had refused to step off the front porch for almost a year, ever since that terrible twister had touched down in the Brooms’ front yard. The only person in the front yard at the time had been Mrs. Broom, tending her pink roses. The twister had sucked her away, like a vacuum cleaner grabbing a clump of cat fur. Boom and Mertyle had been at school, and when they’d come home, all that had remained of the twister was a big circle of dirt burned into the ground.

A tornado had never visited Fairweather Island before, though storms were common. The kind of storms that roll off the ocean, push over trees, and send waves and driftwood crashing onto the rocky beaches. From a bird’s-eye view, Fairweather looked like two lumpy dollops of dough plopped down in the middle of nowhere. The larger dollop, where Fairweather’s quaint harbor and colorful town lay, was attached to the smaller dollop by a narrow land bridge — too narrow for a road and too treacherous for a casual walk. Thus, the upper portion of the island remained wild and undeveloped.

That a twister had touched down just outside the Brooms’ front door was difficult enough to understand. But the fact that Mrs. Broom, a very nice person indeed, could have simply vanished was beyond understanding, especially for Mertyle. The only thing found in the big circle of dirt was the magnifying glass that Mrs. Broom had always kept in her back pocket. The very next day, with her mother’s magnifying glass in hand, Mertyle had refused to leave the house and had begun to fake being sick. She was determined not to miss the moment when her mother miraculously returned.

Mertyle wasn’t the only Broom family member who refused to leave the house. After his wife’s sudden disappearance, Mr. Broom stopped painting seascapes, which was how he had barely made a living. He announced that the twister would return, then he locked himself in his attic studio and asked for weather updates through the keyhole. Except for his dashes to the bathroom, or an occasional appearance in the kitchen to obtain something to eat, he had rarely been seen since. The world beyond the front porch had proven itself to be unpredictably dangerous, and Mr. Broom had decided to avoid it entirely.

In movies, twisters carry people to the Land of Oz and kill wicked witches. In real life, they inflict misery.

But Boom Broom wasn’t like his little sister or his father. His mother’s death didn’t make him want to hide from the world. He wanted to kick the world — kick it good and hard and as often as possible.

A foghorn sounded in the distance. Ice crystals twinkled at the corners of the single-pane window. Boom shivered, tightening his bathrobe, and stared at the wall calendar that hung on his side of the room. One unfortunate outcome of living in the smallest house on Fairweather Island was that Boom and Mertyle had to share a bedroom — the only bedroom, in fact. Their tiny house consisted of a kitchen, living room, and closet on the first floor, a bedroom and bathroom on the second floor, and an attic on the third floor. Not much room for a family of three. And sharing a bedroom was the worst aspect. Why? Not because Mertyle snored or smelled bad in the morning, but because her side was aglow with coordinated pink curtains, pink pillows, and a pink comforter. She had painted a picture of a pink house surrounded by rainbow flowers and had tacked it to her wall. Her goldfish even swam around a pink castle. Boom, who had no interest in coordinating anything, especially anything
pink,
claimed his side of the room with piles of laundry, tousled blankets, and strewn books. But despite his attempts at camouflage, the first color he always saw when he awoke was pink, and that was no way to start a day.

He traced his finger across the calendar. Today was Friday, March thirteenth. He had circled the date in red — not because Friday the thirteenth was supposed to be unlucky but because it was the day Boom had been waiting for since the school year had begun. Today was the final game in the Kick the Ball Against the Wall Tournament. This would be Boom’s last tournament because in three months he would graduate from sixth grade and move on to a new school. He was determined to leave Fairweather Elementary as a champion, glorified in lunchroom lore and playground stories as the best kicker ever. Boom smiled as excitement zapped his kicking foot.

“Yes, I’m definitely going to do spots today,” Mertyle decided. She reached beneath her bed and pulled out the plastic bin that contained her tools of fraud. A black marker sat at the top of the bin, alongside a spritzer of water for mimicking sweat and a jar of fermented mayonnaise that smelled like vomit.

Marker in hand, Mertyle drew a few penny-sized spots on the tops of her feet while Boom searched for his slippers. He kicked through a pile of dirty clothes.
Today is the day!
Mertyle added some spots to her arms.
Today, today, today.
Boom kicked his way across his side of the bedroom, sending Ping-Pong, soccer, and basketballs flying.

“Did you take my slippers?” he asked.

“Your slippers are under your geometry book,” Mertyle said confidently. She added some spikes to a spot, turning it into a sunflower.

Mertyle, with a smug grin, pointed to behind the door. Sure enough, there lay the book with the slippers beneath.

“The only reason you know where everything is, is because I’m too busy to know where everything is,” Boom told her. He spoke the truth. While he struggled with compound fractions and South American geography at school, Mertyle hung out in bed, eating Ry-Krisp and watching game shows. While he endured day after day of teasing because his shoes had holes, or because his pants were too short, Mertyle hid behind the walls of their small house, pretending to be sick, and examining things with their mother’s magnifying glass. While he survived, Mertyle waited pathetically for a miracle to happen.

Boom couldn’t stand the thought of staying inside all day. Sure, he felt sad too. Sadness had almost burnt a hole right through his stomach. He missed his mother as much as Mertyle did. Sure, he hated twisters too, but Boom had vowed that he would never pretend to be sick or shut himself away in the attic. He would never let the big dirt circle get the best of him!

Boom Broom had plans, and they involved the world beyond the front porch. Today, Friday, March thirteenth, was Boom’s day. 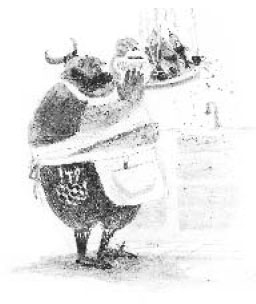