Tags: #To Kill Rasputin: The Life and Death of Grigori Rasputin

To Kill Rasputin: The Life and Death of Grigori Rasputin (Revealing History) 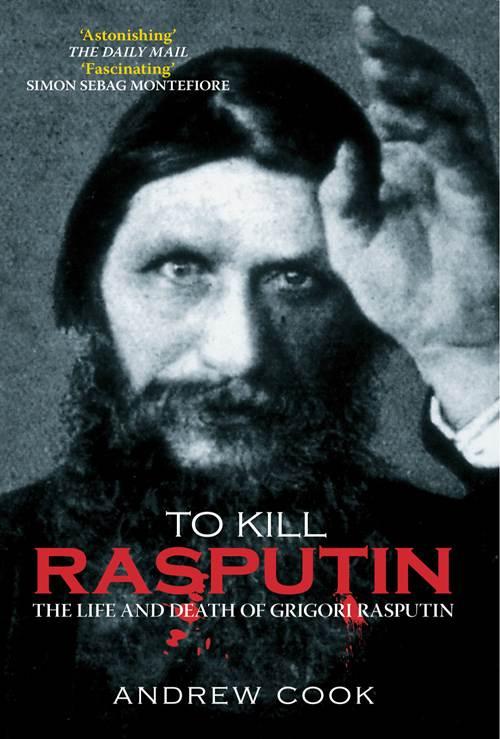 Andrew Cook worked for many years as a foreign affairs and defence specialist, and the contacts he made enabled him to navigate and gain access to classified intelligence services archives. He is only the fifth historian to be given special permission under the 1992 ‘Waldegrave Initiative’ by the Cabinet Office to examine closed MI5 documents that will never be released. He was the historical consultant for the recent BBC
Timewatch
documentary on Rasputin, but the key discoveries came after the screening and appear for the first time in
To Kill Rasputin.
He is author of critically acclaimed
Prince Eddy: The King Britain Never Had, Ace of Spies: The True Story of Sidney Reilly
and
M: MI5’s First Spymaster
. He is a regular contributor on espionage history to
The Guardian
,
The Times
and
History Today
. He lives in Bedfordshire.

The right of Andrew Cook, to be identified as the Author of this work has been asserted in accordance with the Copyrights, Designs and Patents Act 1988.

4   The Spies Who Came into the Cold

Abbreviations Used in Notes and Bibliography

I would like to thank the following people for their invaluable help:

John Francis and John Power of Francis & Francis Investigations have played a key role in tracing the surviving relatives and associates of the British officers involved in the plot and indeed many other key individuals whose parents, grandparents and great-grandparents played a part in the story.

Furthermore, I would like to thank Bill Locke at Lion Television (Executive Producer of the BBC Timewatch film
Who Killed Rasputin?
) whose unstinting support and encouragement enabled me to take this project forward. I am also indebted to John Farren (Editor of the BBC Timewatch series) for commissioning this story and thus enabling the new evidence surrounding Rasputin’s murder to be presented to a wider public. Thanks must also go to all those involved in the production of
Who Killed Rasputin?
, in particular to Michael Wadding, Lisa Charles and Richard Cullen, for their part in making it such a powerful and thought-provoking film.

The New Style (Gregorian) calendar, which had been in use in continental Europe and in Britain since 1582, did not replace the Old Style (Julian) calendar in Russia until 1918, when thirteen days were omitted. In this book, dates are given in Old Style in respect of events before 1918 and in New Style for events afterwards. However, British diplomats and officials in Russia used New Style before the change. When two systems are running concurrently in respect to documentary sources, confusion can gain the upper hand. In order to assist the reader, dual dates have therefore been used in certain parts of this book.

When the idea of writing a revised second edition of my biography of ‘Ace of Spies’ Sidney Reilly was first suggested to me by my publisher Jonathan Reeve, I saw it as an ideal opportunity to follow up several unresolved lines of enquiry that were still outstanding at the time the first edition went to press in 2002.

One of these concerned John Scale, the man who had recruited Reilly to the Secret Intelligence Service, and whose hidden hand had guided his first mission in Russia in April 1918. I knew that Scale had died in 1949, but had so far been unable to trace his family. I was convinced that he was the key not only to Sidney Reilly’s Russian mission but to a host of other espionage conundrums that followed the Russian Revolution.

Eventually, in early 2003, after much painstaking research, his daughter Muriel Harding-Newman was located in Scotland. Meeting her persuaded me that the murder of Grigori Rasputin in 1916 was not quite as straightforward as it at first seemed. The traditional account, as told in the 1927 book
Rasputin
by his self-confessed assassin Prince Felix Yusupov, reads like an over-dramatised gothic horror story. Rasputin is first poisoned, then shot and finally drowned in the River Neva by five disaffected aristocrats, led by Yusupov. The conspirators’ motives are, according to this account, driven by concern about Rasputin’s influence over Tsar Nicholas II and his wife Alexandra. Although this account has been questioned over the years by historians, credible alternative theories had thus far been thin on the ground.

However, according to Muriel Harding-Newman, her father had been instrumental in the murder plot. She also had in her possession an Aladdin’s Cave of intelligence material that had belonged to him, including a list of all British intelligence officers who were stationed in Petrograd at the time of Rasputin’s death. Once back at home I took the time to read again my copy of Yusupov’s book. Over the next few months I managed to trace the families of a number of other British intelligence officers on Scale’s list and read the diplomatic and intelligence reports that were being exchanged between London and Petrograd in 1916. These made stark reading, and reminded me just how close Britain came to defeat at this, the darkest hour of the war, haunted by the spectre that Russia was about to conclude a separate peace with Germany and withdraw from the conflict. Time and again the name of Rasputin cropped up in the reports.

In Russia, archive records indicated that three investigations into his death had been inconclusive due to the fact that they had never been completed and, as a consequence, no one had ever been charged or faced cross-examination in a court of law. Two investigations at the time of his death were run concurrently by the Ministry of the Interior and the Ministry of Justice. These had been halted when it became evident that members of the Tsar’s own family were involved in the plot. After the fall of the monarchy in March 1917, the new Provisional Government set up an ‘Extraordinary Commission of Inquiry for the Investigation of Illegal Acts by Ministers and Other Responsible Persons’. Among the many issues it sought to investigate were Rasputin’s influence and the circumstances surrounding his death. This was to be the responsibility of the Commission’s Thirteenth Section. The enquiry was still ongoing when the Bolsheviks seized power and closed down the Commission.