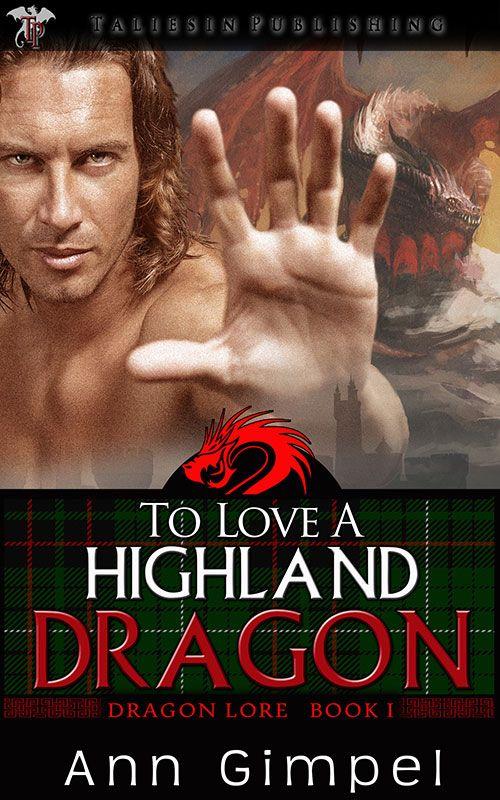 eBooks are not transferable. They cannot be sold, shared, or given away as it is an infringement on the copyright of this work. Please purchase only authorized electronic or print editions and do not participate in or encourage the electronic piracy of copyrighted material. Your support of the author’s rights is appreciated.

One Way Fare by Barb Taub and Hannah Taub

It takes a village to bring a book into the world. I’m ever so grateful to Dayna Hart, my content editor, and Deidre Mursch, my final line editor. Kudos to James Caldwell, a talented—and tolerant—cover artist. I’m sure he danced a jig when I stopped asking him to change things.

I’ve always been fascinated with dragons, time travel, and humans who can shift into animal forms. To Love a Highland Dragon gave me an opportunity to blend all of those things into a story that’s truly a child of my heart. A final thanks to Georgia Woods and Barb Wilson, CEO and CFO respectively, of Taliesin Publishing. Both women have my utmost respect.

In a cave deep beneath Inverness, a dragon shifter stirs and wakens. The cave is the same and his hoard intact, yet Lachlan senses something amiss. Taking his human form, he ventures above ground with ancient memories flooding him. But nothing is the same. His castle has been replaced by ungainly row houses. Men aren’t wearing plaids, and women scarcely wear anything at all.

In Inverness for a year on a psychiatry fellowship, Dr. Maggie Hibbins watches an oddly dressed man pick his way out of a heather and gorse thicket. Even though it runs counter to her better judgment, she teases him about his strange attire. He looks so lost—and so unbelievably handsome —she takes him to a pub for a meal, to a barbershop, and then home. Along the way the hard-to-accept truth sinks in: he has to be a refugee from another era.

Never a risk-taker, Maggie finds her carefully constructed life changed forever. Swept up in an ancient prophecy that links her to Lachlan and his dragon, she must push the edges of the impossible to save both the present and her heart.

Kheladin listened to the rush of blood as his multi-chambered heart pumped. After eons of nothingness, it was a welcome sound. A cool, sandy floor pressed against his scaled haunches. One whirling eye flickered open, followed by the other.

Where am I?
He peered around himself and blew out a sigh, followed by steam, smoke, and fire.

Thanks be to Dewi—
Kheladin invoked the blood-red Celtic dragon goddess—
I am still in my cave. It smelled right, but I wasna certain.

He rotated his serpent’s head atop his long, sinuous neck. Vertebrae cracked. Kheladin lowered his head and scanned the place he and Lachlan, his human bond mate, had barricaded themselves into. It might have only been days ago, but somehow, it didn’t seem like days, or even months or a few years. His body felt rusty, as if he hadn’t used it in centuries.

How long did I sleep?

He shook his head. Copper scales flew everywhere, clanking against a pile that had formed around him. More than anything, the glittery heap reinforced his belief that he’d been asleep for a very long time. Dragons shed their scales annually. From the looks of the pile circling his body, he’d gone through hundreds of molt cycles. But how? The last thing he remembered was retreating to the cave far beneath Lachlan’s castle and working with the mage to construct strong wards.

Had the black wyvern grown so powerful he’d been able to force his magic into the very heart of Kheladin’s fortress?

If that is true— If we were really his prisoner, why did I finally waken? Is Lachlan still within me?

Stop! I have to take things one at a time.

He returned his gaze to the nooks and crannies of his spacious cave. He’d have to take inventory, but it appeared his treasure hadn’t been disturbed. Kheladin blew a plume of steam upward, followed by an experimental gout of fire. The black wyvern, his sworn enemy since before the Crusades, may have bested him, but he hadn’t gotten his slimy talons on any of Kheladin’s gold or jewels.

He shook out his back feet and shuffled to the pool at one end of the cave where he dipped his snout and drank deeply. The water didn’t taste quite right. It wasn’t poisoned, but it held an undercurrent of metals that had never been there before. Kheladin rolled the liquid around in his mouth. He didn’t recognize much of what he tasted.

The flavors are not familiar because I have been asleep for so long. Aye, that must be it.
Part of his mind recoiled; he suspected he was deluding himself.

“How long did we sleep?”

“I doona know.”
Water streamed down the dragon’s snout and neck. He knew what would come next; he didn’t have to wait long.

“Let us shift. We think better in my body.”
Lachlan urged Kheladin to cede ascendency.

“Ye only think that is true.”
Kheladin pushed back.
“I was figuring things out afore ye woke.”

“Aye, I’m certain ye were, but…”
But what?
“Och aye, my brain is thick and fuzzy, as if I havena used it for a verra long time.”

“Mine feels the same.”

The bond allowed only one form at a time. Since they were in Kheladin’s body, he still had the upper hand; the dragon didn’t think Lachlan was strong enough to force a shift without his help. There’d been a time when he could have but not now.

Was it safe to venture above ground? Kheladin recalled the last day he’d seen the sun. After a vicious battle in the great room of Lachlan’s castle, they’d retreated to his cave and taken their dragon form as a final resort. Rhukon, the black wyvern, had pretended he wanted peace. He’d come with an envoy that had turned out to be a retinue of heavily armed men…

Both he and Lachlan had expected Rhukon to follow them underground. Kheladin’s last thought before nothingness descended had been amazement their enemy hadn’t pursued them.
Hmph. He
did
come after us but with magic. Magic strong enough to penetrate our wards.

“Aye, and I was just thinking the same thing,”
Lachlan sniped in a vexed tone.

“We trusted him,”
Kheladin snarled.
“More the fools we were. We should have known.”
Despite drinking, his throat was still raw. He sucked more water down and fought rising anger at himself for being gullible. Even if Lachlan hadn’t known better, he should have. His stomach cramped from hunger.

Kheladin debated the wisdom of making his way through the warren of tunnels leading to the surface in dragon form. There had always been far more humans than dragons. Mayhap it would be wiser to accede to Lachlan’s wishes before they crept from their underground lair to rejoin the world of men.

“Grand idea.”
Lachlan’s response was instantaneous, as was his first stab at shifting.

It took half a dozen attempts. Kheladin was far weaker than he’d imagined and Lachlan so feeble he was almost an impediment. Finally, once a shower of scales cleared, Lachlan’s emaciated body stood barefoot and naked in the cave.

Lacking the sharp night vision he enjoyed as a dragon, because his magic was so diminished, Lachlan kindled a mage light and glanced down at himself. Ribs pressed against his flesh, and a full beard extended halfway down his chest. Turning his head to both sides, he saw shoulder blades so sharp he was surprised they didn’t puncture his skin. Tawny hair fell in tangles past his waist. The only thing he couldn’t see was his eyes. Absent a glass, he was certain they were the same crystal-clear emerald color they’d always been.

Lachlan stumbled across the cave to a chest where he kept clothing. Dragons didn’t need such silly accoutrements; humans did. He sucked in a harsh breath. The wooden chest was falling to ruin. He tilted the lid against a wall; it canted to one side. Many of his clothes had moldered into unusable rags, but items toward the bottom had fared better. He found a cream-colored linen shirt with long, flowing sleeves, a black and green plaid embroidered with the insignia of his house—a dragon in flight—and soft, deerskin boots that laced to his knees.

He slid the shirt over his head and wrapped the plaid around himself, taking care to wind the tartan so its telltale insignia was hidden in its folds. Who knew if the black wyvern—or his agents—lurked near the mouth of the cave? Lachlan bent to lace his boots. A crimson cloak with only a few moth holes completed his outfit. He finger-combed his hair and smoothed his unruly beard. “Good God, but I must look a fright,” he muttered. “Mayhap I can sneak into my castle and set things aright afore anyone sees me. Surely whichever of my kinsmen are inhabiting the castle will be glad the master of the house has finally returned.”

Lachlan worked on bolstering a confidence he was far from feeling. He’d nearly made it to the end of the cave, where a rock-strewn path led upward, when he doubled back to get a sword and scabbard—just in case things weren’t as sanguine as he hoped. He located a thigh sheath and a short dagger as well, fumbling to attach them beneath his kilt. Underway once again, he hadn’t made it very far along the upward-sloping tunnel that ended at a well-hidden opening not far from the postern gate of his castle, when he ran into rocks littering the way.

Boo by Rene Gutteridge
You Belong To Me by Ursula Dukes
A Soldier's Christmas by Lexi Buchanan
Up and Down by Terry Fallis
Druids by Morgan Llywelyn
Madbond by Nancy Springer
Mesmerized: The Magician's Plaything by Mallorie Griffin
While We're Far Apart by Lynn Austin
LOVING THE HEAD MAN by Cachitorie, Katherine
The Witch of Watergate by Warren Adler