Read To Love a Thief Online 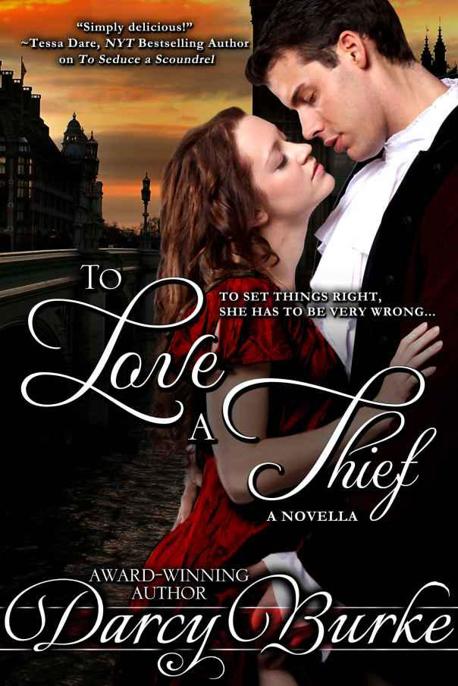 To desire a thief…

Daniel reached Aldridge’s office and went inside. What greeted him made him stop in his tracks. “Miss Renwick?”

She stopped, her hand on the desk drawer she’d just closed. She stood straight and smoothed her skirt. Dots of pink colored her cheeks. She would have looked alluring if she hadn’t also looked guilty. “Good evening, my lord. I do believe I’m in the wrong room.”

Wishing to conduct his interview in private—and he intended to conduct an interview as the constable in him roared to the surface—he closed the door behind him. “What are you looking for in Lord Aldridge’s office?”

“Nothing. As I said, I’m in the wrong place. I was looking for the retiring room.” She moved around the desk and made for the door.

Daniel stepped into her path. “You thought the retiring room might be contained in the desk drawer?”

The pink in her cheeks darkened and spread. “Of course not. If you’ll excuse me.” She made to move past him, but he placed his hand on her forearm.

“I will not. At least not until you tell me what you were doing. You can’t expect me to believe you were simply in the wrong room. You were looking for something. Tell me what it was.”

She moved away from him as if his touch burned her. Maybe it did. The feel of her skin beneath his palm was enough to heat him in the most inappropriate places.

“Please, my lord. I was mistaken. Just let me go.” Then she dashed for the exit.

Daniel went after her, but she’d already opened the door and was stepping into the corridor. He stopped short lest he tackle her over the threshold, but then she spun on her heel and charged right back into him, sending him stumbling backward. She gained her balance, turned, and shut the door firmly.

Daniel lurched forward and, without thinking, pinned her against the door. He laid his palms on either side of her shoulders against the wood. “What the devil is going on?”

“Keep your voice down,” she hissed. “Someone is in the corridor.”

That’s why she’d come right back into the office. He didn’t move away from her. Instead, he enjoyed the heat of her body, the flush of her exertion, the shallow pant of her breath. She kept her eyes averted, but Daniel would get her to look at him soon enough.

“Unless you want me to open this door and let all and sundry see us together, you’ll tell me what the hell you were doing in Lord Aldridge’s office.”

Her eyes snapped to his, their hazel depths flashing. She said, “You wouldn’t,” but her tone was laced with doubt.

He watched the muscle in her throat work as her pulse sped beneath her flesh, and her chest heaved. “You don’t know me well enough to say for sure. Do you want to find out?”

To Seduce a Scoundrel

For Lacey, my first CP and one of the very best friends a girl could have.

I’m so glad we found each other.

Thank you Martha Trachtenberg for your fabulous, fabulous copyediting—you are a gem! And special thanks to Steve for reading. Or at least trying to. One of these days you’ll get it.

And thank you to my wonderful children, whose patience and love continue to amaze, inspire, and humble. I love you.

JOCELYN RENWICK had loved a good ball—the dancing, the decorations, the costumes, the breathless excitement as guests arrived—during her very brief Season two years before. She’d been full of wonder and anticipation for a future that had seemed rife with possibility. Now, as a paid companion, she adorned the wall, and the balls she’d once enjoyed had become sadly lackluster.

It wasn’t that the balls themselves had suddenly turned dull. It was her situation. With no close relatives to turn to after her father’s death, she’d become the ward of a family friend, who’d inherited Papa’s property and meager estate. While her guardian had taken care of her, he hadn’t offered to finance another Season, and her trust wasn’t sufficient to cover the expense. And since there was no one marriageable—at least in her opinion—in her small village in Kent, Jocelyn’s options were limited.

She’d jumped at the chance to serve as paid companion to her guardian’s great-aunt, Gertrude Harwood. She was a charming, elderly widow, and Jocelyn was delighted to accompany her for what she said might be her final Season.

Unfortunately, Jocelyn’s Season so far hadn’t included meeting any eligible bachelors or any dancing. The only people she mingled with were Gertrude’s friends, who were even now clustered about.

The edge of Mrs. Montgrove’s monstrous fan—it was the size of a dinner plate with ostrich feathers jutting at all angles—caught the side of Jocelyn’s head, dislodging a lock of hair.

“Oh!” Mrs. Montgrove turned to Jocelyn with eyes widened in horror. “I’m so clumsy. Look what I’ve done to your coiffure. Here, let me fix it.” She tried to smooth the hair back up toward the rest of the curls styled atop Jocelyn’s head. However, judging from the tickle against her ear, the wisp wouldn’t stay put.

“Just tuck it behind her ear,” Gertrude said with a wave of her fan, which was decorated with small diamond-shaped mirrors.

“Let me.” Mrs. Dutton removed her glove and then licked her finger. When her digit moved toward the wayward lock, Jocelyn had to fight to keep from ducking.

Instead, she held up her hand. “I think I’ll just repair to the retiring room for a spell before the rest of my hair falls apart.”

They all stared at her, and Mrs. Montgrove looked stricken.

Jocelyn rushed to add, “It’s not your fault. My hair has a mind of its own.” She gave all of them her sunniest smile before turning on her heel and picking her way through the ballroom. She hadn’t meant to imply that Mrs. Montgrove had caused a hair disaster. Someday she would perhaps learn to think before she spoke; however, the task seemed especially difficult when neither Mama nor Papa were around to offer loving reprovals.

Oh, how she missed her parents. Tears blurred her eyes as she meandered through the crowd. Mama had been gone a very long time, but Papa’s death just two years ago was still fresh enough to elicit a sharp twinge of melancholy, if only for a moment.

She shook the emotion off. Her eyes refocused, and she attempted small smiles as she passed people she’d met two years before. Some made eye contact, while others simply looked away or stared right through her. There was nothing like an aborted Season followed by two years of mourning and adjusting to a life without family to make one feel insignificant.

Oh, Papa
. Jocelyn made it out of the ballroom before her throat dried up and constricted. Perhaps she’d returned to London too soon. Perhaps she shouldn’t have come back at all.

By the time she reached the retiring room she’d mostly recovered her equilibrium, locking her grief in the recesses of her mind. Pasting a pleasant expression on her face, she opened the door and immediately stepped to the side as a woman departed. She skirted by Jocelyn without making eye contact.

Invisible
. No one saw her and they never would, for she hovered at the fringe of polite Society as a paid companion. Still, it was better than nothing, and without the funds to finance a second Season, the best she could hope for. She was young, and perhaps she’d yet marry.

Straightening her spine and again banishing her maudlin thoughts, Jocelyn closed the door and moved into the retiring room. An attractive brunette was patting her hair before a mirror. She turned upon hearing Jocelyn’s approach and offered a friendly smile. “Good evening.”

Jocelyn was momentarily surprised. Her lips curved up in response and then froze as her gaze settled on the necklace around the woman’s neck. Three strands of pearls were held together by an oval, ivory pendant, which bore a hand-painted scene of two lovers in a boat beneath a sweeping willow tree. Her
mother's
necklace—it had to be—the one Papa had commissioned as an engagement gift. Jocelyn squinted, looking for the scratch in the glass over the ivory—damage caused by her tiny fingers when, as a toddler, she’d knocked it off Mama’s dressing table.

Seeing the small defect, Jocelyn was instantly transported back two years to the night she and Papa had returned home after a musicale to find their house ransacked, their retainers bound together in the scullery, and all of their most prized possessions gone. The panic and fear came back to her in a wave, as did the shock of her father’s heart attack that had occurred as a result.

Unknown by Unknown
The Spring Tide by Cilla Borjlind, Rolf Börjlind
The Power of the Heart: Finding Your True Purpose in Life by Baptist de Pape
A Shadow's Light BK 2 by J.M.Pierce
The Gilded Scarab by Anna Butler
Harlequin Superromance February 2014 - Bundle 1 of 2: His Forever Girl\Moonlight in Paris\Wife by Design by Liz Talley
A Little Bit on the Side by John W O' Sullivan
The One Left Behind (The One Series) by Nicole, Lena
Vacation Dreams by Sue Bentley
The Last Hedge by Green, Carey