Read To Love a Way of Life Online

To Love a Way of Life 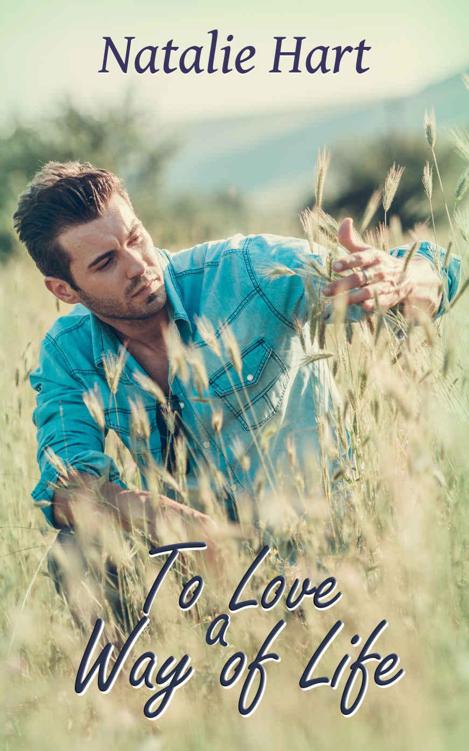 To Love a Way of Life

TO LOVE A WAY OF LIFE

To Love a Way Life | Chapter 1

To Love a Way Life
Chapter 1

A
nose pressed into Emma’s crotch.

The dog didn’t move, he was enjoying his ear scratch too much. His tail waggled, he was obviously delighted by the attention. He really was a good dog.

Emma appreciated the relaxed attitude in Grant’s. If someone looked after their dog, and it sat and was friendly to the customers then most people wouldn’t have a problem with a hairy mutt paying a visit.

“No, he loves them, but food is always top of his mind. I have to walk him five miles every day. He’s too fond of dinner, and lunch, and treats.”

The man stood from his stool at the bar and walked over. He was drinking a coke, or a coke and a spirit. He was tall, Emma would best describe him as wizened, not from age but from an outdoor life. His clothes were all practical, sturdy boots and an expensive rain coat. His jeans were well worn, but in good condition. A manufacturer of designer clothes would pay someone a fortune to have a brand new pair of denims look worn like that.

His hair was a mixture of near-black and grey, not a salt and pepper look as some would say it took more of an earth and rock tone. His skin was well used to the elements. He looked rugged.

Stan did sit, but he didn’t leave Emma’s side. He stayed near her, well within reach of belly rubs and ear scritches. His tail thumped against the floor as he looked up at his master.

“If he’s bothering you I’ll take him away.”

“Him? God no, he chases ducks and then gets frightened when they chase him back.”

“You keep ducks?” She asked.

“No, well, I keep a few animals. I like it, they give me food, I look after them. I work with farmers though, small farmers.”

“Does Stan come with you when you work?” She scratched his ear again and he lifted a paw up onto her leg. She patted it and he dozily let his tongue droop out of his mouth while giving her a lazy, contented squint and long blink.

“I help small producers handle their business affairs, helping them sell at farmer’s markets, I’ve helped up a few set up for regular customers and restaurants, delivery boxes too.”

“I’ve heard of those delivery boxes, they’re big in other parts of the world.”

“These guys are only catching onto business possibilities now, they have to. Supermarkets are barely worth it unless you’re a huge commercial producer. These guys barely keep their business receipts let alone accounts.”

“Well, if you’re looking for someone to help with accounts I’m looking for work.” Emma didn’t like saying that, pushing herself forward. He was just being friendly, not looking to hire someone from the pub, but she needed work. She had to put herself out there.

“You’re an accountant?” He asked.

“I’m trying to set up on my own, my firm recently downsized.”

Patrick slapped Stan’s belly and gave him a vigorous rub. “Good boy, Stan. Sniffing out an accountant.” Stan looked surprised, he had done something well but he didn’t know what that was.

“I’m sorry about your job,” he said. He did look sorry. “Do you have much experience on your own?”

“No, I always worked for a firm, mainly handling small accounts. I was low on the commercial ladder there, hence the layoff.”

“It must be difficult rustling up clients.”

“It’s the marketing, and promoting yourself. I just can’t do it.”

Irish bars were so strange. In a good pub you could run into anyone, and so often interesting people from a diversity of areas. Emma was waiting for a friend and she had accidently found someone who wanted to talk about accountancy, when accounting was supposedly the most boring job on the planet. The last time she was here she ended up talking to a sculptor who welded steel, that was far more interesting than taxes and books.

“I used to work in marketing,” he said. “In London, it wasn’t for me. So I left for the countryside and raised Stan. Didn’t I Stan?” On hearing his name the dog perked up, he sniffed in Patrick’s hand, obviously looking for a treat but when none were forthcoming he rested his paw back on the ground and returned his head to Emma’s lap.

“The dog’s obsessed with food,” he said. “Do you drive?” Patrick asked.

“A few of my farmers need an accountant, someone just to show them some basics. We’re out the country though. If you can get out to me I’d be willing to pay, and I can help with some of your marketing.”

“That’d be amazing.” Going to the pub was the right decision. She might get a few billable hours in if this worked out, she might even gain a client or two.

“Don’t agree to anything now, sit and think on it for a while.”

Emma took out her phone and exchanged email addresses with Patrick. She would think over this business proposal but she already knew what her response would be. She had some savings she could access immediately, but she didn’t want to dip into them. She almost had enough saved for a deposit on a house, and she could have afforded mortgage payments by herself before getting laid off. Losing her job had put a real dent in her plans.

“Would you mind if I check up on you?” Patrick asked.

“Well, I’d need to check references and all that. Keep everything above board.”

“Oh, of course. I’ll email you my old university lecturer’s number, my professional accreditation is online, and Paul Desmond at Desmond, Desmond and O’Malley will be happy to provide a reference.”

“It’s just formalities. Stan has already given you his woof of approval,” Patrick said. “Isn’t that right you hairy, little monster!” He rubbed Stan’s belly and the dog did woof.

“See!” He said. Stan looked pleased with himself.

“Stan’s a better recruiter than any of the people I’ve talked to,” Emma said.

A woman walked through the door in Grant’s and Emma waved hello. It was her friend Sandra, and Emma finally had some good news.

“I’ll leave you alone, it’ll take a few days for me to e-mail you. I’ll need to evaluate which clients need accounting help.” Patrick smiled and Stan followed him back to the bar. Emma missed having the cuddly dog’s body pressed into her, even if Stan did drool.

“He wasn’t chatting me up, his dog was being friendly and—“

“That’s the oldest trick in the book. Get the good looking girl to fawn all over a dog and swoop right in.”

“We were talking about business, actually.”

“Anyway, he’s not that old. In his early forties I’d say, if even that.”

“He works outside a lot, with farmers, helping them sell their produce.”

“Perfect for you then. Some hippy selling organic veg at a market.”

Emma actually considered the idea, she wouldn’t mind a quiet life. Working hard in her career hadn’t helped her. She was the first one on the cutting block at Desmond, Desmond, and O’Malley. Twelve hour days, from eight in the morning until eight at night, and skipped lunches or a salad at her desk didn’t seem to count for anything in the corporate world. Would it really be so bad to have a more relaxed life? A life helping nice clients even if it meant she’d always have to buy a second hand car?

“You were way off for a while there,” Sandra said. “Thinking about his pickle?”

“No. I was thinking about having a satisfying job and a good work-life balance.”

“I don’t know why I hang around with you,” Emma said. “Your mind is pure filth and my mother already disapproves of your bad influence.”

“Your mother wanted you to go to London and work for one of the Big Four.”

“She could have been right, I did the 12 hour days anyway and look where it got me?”

She turned around to look at Patrick. He was still drinking his coke. He read a book that was covered in plastic and looking a little bit battered. It was probably from the library. Stan rested his head on Patrick’s bag on the floor. He looked contented.

Patrick had confirmed he was looking through his own notes to rustle her up some clients. There was a lot of room for a small producer to operate in, the government had been good to them. Not as good as they were to the major agri-business corporations, but a good accountant could be a lot of help to an independent farmer.

She really should have been focusing on promoting herself to small traders over the past few days, but she figured getting this gig with Patrick was a real opportunity. If she could establish herself as an expert in the area she could work with a lot of clients, and this was just the type of experience she needed to get started.

Emma sat and daydreamed about owning a small house in the countryside, or maybe a house in a little countryside village, one with three pubs that let you carry your pint from one bar to another if you needed a change of scenery, or you just fancied a different crowd. She even found herself imagining quiet drinks with Patrick in front of an old style hearth with Stan sitting in front of the roaring flame. She really wanted a dog, she just couldn’t look after one if she was working in an office.

She checked her e-mail again. She had forced herself not to check it every ten minutes, she’d only get worked up over nothing coming in; nothing from small businesses and nothing from Patrick.

Except now there was a new e-mail, from a real e-mail address and not a corporate newsletter or Amazon promoting the next great thriller for her Kindle.

She opened the e-mail, straight away she saw Patrick still wanted to do this, and he wanted to know if she was still in. He had twelve different farmers lined up for her, some might need a payment plan but he testified to their ability to pay. She knew from her research that farmers were reliant seasonal income, it was something she expected from this.

As well as the farmers he had a few artisanal food producers who wanted her help, nothing long term, just looking to get their existing accounting systems looked over and help in case they missed anything. She was excited, this would be more work than she’d had since she was laid off!

She immediately texted Sandra, “Patrick is amazing. He has so much work lined up. I’ll be busy for a month, at least.”

Sandra texted back, “That’s how men work. They line you up with a steady financial income and next they want your panties off.”