Read To Snatch a Thief Online

To Snatch a Thief 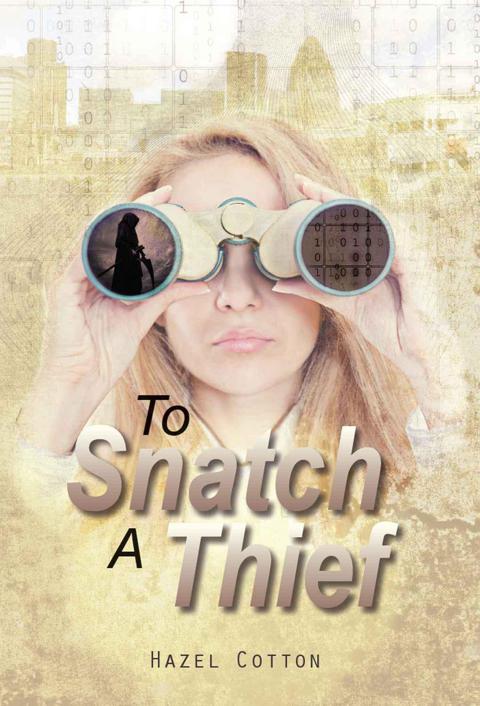 Hazel Cotton has asserted her right under the Copyright, Designs & Patents Act 1988 to be identified as the author of this work. This book is fictional and, except in the case of historical fact, any resemblance to actual persons, living or dead is purely coincidental.

‘Here, I’ve brought you bread,’ he said, a sudden irritation crossing his face as the child stepped back. It wiped a gutter-slimed hand across its mouth, hesitated.

‘There’s no catch. You’re hungry. I’ve brought you food.’ The man shifted closer, but pressed the handkerchief more tightly over his mouth. The stench from the building – if you could call this crumbling ruin a building - was overpowering. What was left of the walls leaned drunkenly to one side, slimy with green dripping water. Icy draughts blew, unhindered, through gaping holes in the powdery bricks freezing the bucket catching oily drips in one corner. He took another step towards the doorway, his fine leather shoe splashing into an open drain, and shuddered at the unspeakable shapes floating there.

Around him, in the labyrinth of streets, the conditions were repeated. The slums were getting worse, he thought. Mile upon mile of poverty, hunger, crime; humans brought to their knees by the apathy of governments too weak, too afraid for their own political skins to act. The man’s hand fisted over the bread. ‘Take it, damn you.’

But still the boy hesitated. Then, through the tangle of greasy curls, his eyes lowered to the food, thrust now right under his nose. He ran a pale tongue over his chapped lips before one small hand shot out, grabbed the loaf and stuffed it down in large chunks without bothering to chew.

‘There now, that’s better, isn’t it?’ The man’s voice was smooth again, relaxed. He watched calmly as the child’s actions slowed; merely tilted his head as it staggered, its eyes glazing over, the uneaten portion of bread dropping from its hand. The boy slid boneless to the ground, a pathetic heap of rags amongst the squalor in which he had been conceived.

The man moved forward, bent over and held a finger to the child’s lifeless neck. ‘Interesting,’ he murmured. ‘Ten seconds, no obvious sign of pain.’ With a satisfied smile, he straightened, wiped his hand on the handkerchief, and before leaving, kicked the remaining scrap of bread into the gutter.

Skye stared into the ice cold eyes of her enemy as she prepared herself for the attack. When he made his move it would be fast and she needed to be ready. A metre away, his long, muscled body, dressed in a black combat suit waited, relaxed, psyching her out.

She raised an eyebrow. He smirked. ‘Try and take me,’ he challenged. The thin line of silver studs that ran from his right eyebrow to his hairline glinted in the glare of the overhead lights.

When she feinted to the side, he shadowed her move. ‘Clumsy,’ he taunted. ‘You’ll have to do better than that.’

She rolled onto the balls of her feet, bounced; spun and kicked back. Her foot met fresh air. She hadn’t even seen him move. He was quick and dangerous but she wasn’t about to let him win. She lunged, jabbing both fists in a quick one two punch sequence. He blocked both with forearms like steel.

Irritation spiked. He wanted better. She’d give him better.
Watch me
. Sighing, she relaxed her shoulders, wandered two paces to the left, then reached up and pulled her hair free of its band, shaking it back from her face. Thick and wavy, it tumbled past her shoulders almost to her waist. For a split second his eyes followed the movement. She sprang, flinging herself low, intending to hit him below the knees, thereby taking his legs out from under him, but suddenly her own legs were above her head and she was staring at the gymnasium floor, then up at the ceiling as she landed, with a thud, on her back. There was pain in her shoulder. Too late she remembered to throw her arm out, judo-style, to break her fall. Well hell.

‘Try that again when you know how to pull it off,’ he remarked.

Angry, humiliated, she staggered to her feet. Hunter picked her up as her knees buckled, slung her over his shoulder and carried her to a workout bench, then plonked her down.

‘Watch!’ he commanded in that half irritated, half amused tone she loathed. ‘Watch, and learn. King.’ He crooked one finger and a boy pushed off from the wall where he’d been lounging, and took her place on the mat.

Skye rolled her sore shoulder knowing she’d have a hell of a bruise by morning, and accepted the inevitable. King was about to have the crap beaten out of him.

Since she’d been ordered to observe, she did just that. Lieutenant Hunter: an officer in the law enforcing arm of the Military & Civilian Combined Forces, mid-thirties, mixed-heritage, with dark hair tied back from his lean face in a sleek tail. He was a snatcher and therefore the enemy, and right now she hated his guts.

King was heavier: seventeen, same age as her, a repeat offender, also like her, with a square face and solid jaw and a nose that looked like he’d sparred a bit. His brown hair was cropped short above a wide forehead. The grin on his face never wavered as he circled Hunter’s motionless figure. Skye felt a stab of pity.

When he lunged, grabbed, Hunter flipped back, whirled and with an easy sweep of his legs took King’s out from under him.

King went down with a thud and an explosion of colourful swearing.

‘You fight like a bull. If the assailant had half my speed you’d be dead before you hit the ground. Both of you, sim room, ten minutes.’ Without another word, Hunter strode out, slamming the door behind him.

‘Well, that went well.’ King sat up; gingerly tested his tailbone. ‘You lasted longer than me at any rate.’ He flashed a grin and stood. ‘You okay?’

‘Never better.’ Fuming, she wandered to the windows and relieved some of her frustration by kicking the skirting board. ‘Smug, stone-faced, self-satisfied, son-of-a… sod. I’ll bring him down if it’s the last thing I do,’ she promised.

‘Son-of-a-sod?’ King came and stood beside her.

Skye shrugged, wincing as her shoulder screamed in protest. ‘Had to find another ess. He’s in a pisser of a mood tonight, more than usual.’

‘Word is he’s beating himself up about Corporal Blake; she was on his snatcher team. The memorial service is next week.’ King’s eyes went flat, his eyes blank. ‘Official line, she went down in the line of duty. Snatcher’s know the risks when they sign on, but…’ He moved a shoulder. ‘I done a load’ve bad shit, brawling and stuff when I’m juiced, but offing someone…nah, that sucks. Blake brought me in coupla times and was nicer than most.’ He sucked in a breath. ‘She was okay, you know.’

They stood in silence each lost in their own thoughts. Outside it looked cold, very cold. Winter 2089 was gearing up to be a shocker. It had been raining sleet all day and snow was forecast. Despite the triple glazed windows and the heat pumping out of the climate control units, Skye shivered. Beyond Combined Forces Re-Adjustment Centre walls, frozen commuters would be swarming around the teeming beehive that was London; heads bowed and breath steaming as they juggled for shuttles, dived up and down the tubes, or grabbed a hot meal from the licensed street hawkers making the most of the rush-hour trade. The mono-rails would be full to choking now as offices spewed out workers, and those who could afford private vehicles made for the park n rides.

She looked up. Overhead in the leaden sky, a never-ending stream of refuse trains trundled their way to the transit depots for off-planet disposal on Lunar I, while freight trams bulleted around the capital scurrying down streets like cockroaches down holes. Soon the dives and brothels of the western suburbs would be heaving with punters eager to use sex, drugs, or whatever else they could, to blank out the misery of their lives for a time, while over to the south east, theatres, clubs, smart restaurants and the like would be opening their doors to the wealthy. It had been a rich hunting ground - she’d supplemented her income there for the last six years. And in the middle of it all, thrusting like a dirty great sword out of the city’s heart stood the Parliament Tower. Its sides were smooth, black and polished like glass. Eighty floors of power, topped with a spear-point of gold.

‘Are you going to stick to this deal?’ she eventually asked.

Flicking his eyes to the red dot flashing above the door, King lowered his voice to a whisper. ‘You’ve got to be kidding. You know, as well as I do, what would happen to us out there once it got around.’ He ran a hand through his hair. ‘Nah, I’m playing along with it for now to get the early release, but once I’m out, I’m gone. You?’

She’d struggled over this for days; ever since she’d been approached for the government’s new-fangled, use-a-thief-to-snatch-a-thief recruitment scheme. ‘I dunno, King,’ she said, choosing her words carefully. ‘I’m eighteen soon. I’ve got a record. Jobs are hard enough to find as it is and it’ll get worse as the northerners come in. But if I’m caught again I’m looking at a long stretch, and not in a place like this.’ She paused because he was eyeing her warily. ‘But you’re right. We don’t belong on their side of the line.’ For a second she felt a stab of regret. ‘Can a leopard change its spots?’ she wondered.

‘Leopards? Aren’t they extinct or something?’

She sighed, then smiled. ‘Yeah, a long time ago.’

‘Did Hunter say why he picked you?’

‘Kinda. Actually I think he just scrolled down the iRoll and picked a number at random.’

Never serious for long, King licked a finger and smoothed it over his raised eyebrow. ‘I figured it was my superior gaming skills, my sparkling wit, and my ability to fart the national anthem.’

They started walking. ‘What sort of pizza?’

‘Some huge, greasy, double crust pizza, with soy pepperoni and dripping in fake cheese, and a big portion of deep fried mealies on the side.’

‘Swap the mealies for bugs; you get the assortment.
The moment you pick it, you’ll be jumpin’ like a cricket
.’ She sang the irritating jingle and made him laugh.

‘Yeah, solar.’ King draped an arm round Skye’s shoulders in a companionable way as they left the gym and started up the long corridor outside, their shoes squeaking on the polished floor. The building had once been a hotel, but had been re-vamped in the last decade or so as a re-adjustment facility for under-age offenders. Three storeys of lime green walls and high end security. Its homely decor and single occupancy bedrooms were supposed to make them feel all warm and fuzzy and turn from their lives of crime. Yeah, Skye thought, like that was going to happen. With little or no chance of getting a job outside, most of the kids there re-offended just to get back in.