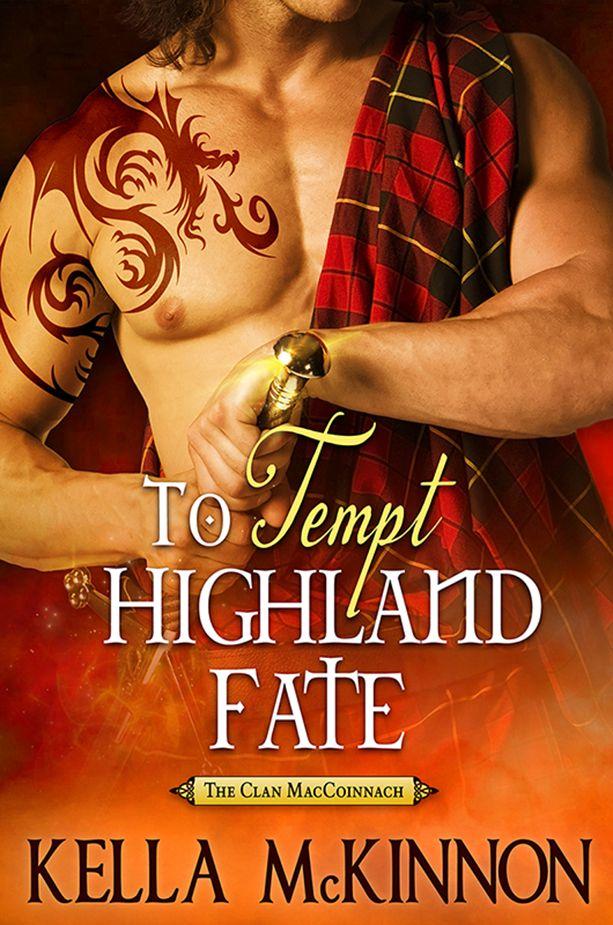 Haunted by a past he cannot change, Drust MacCoinnach has made himself a willing sacrifice in his clan’s fight to keep the balance of Good and Evil.  But instead of the heroic death he expected, he awoke to find himself saved by a woman who would turn his life inside out, and make him burn for her so fiercely that nothing can stop him from claiming her as his own.

Willa has her own demons to slay, and a narrowly-escaped past she dreams of putting behind her for good.  But when she comes across a wounded stranger high in the mountains, she simply cannot leave him there to die, even though she is running for her own life.  As she nurses him back to health, she realizes the crossing of their paths was no accident… if only she can convince the headstrong warrior to cede his body and his heart to her.

Drust Mac Coinnach was growing desperate.  He had been without food or water for what seemed like days, though he couldn’t be certain.  And the wound in his side that he couldn’t even see in the inky darkness throbbed and burned so much that he feared he would eventually pass out.  If not from the pain (he
was
a warrior, after all) then from the steady loss of his lifeblood.  But not now…not yet.  For now, he was still alive and standing, and so he would keep walking.  The underground tunnels that he felt his way through seemed to go on forever, and he knew that it would be by a miracle alone that he eventually found his way out.  Especially since he knew he was slowly bleeding to death.  Though he kept a wadded piece of cloth torn from his shirt pressed to the wound, it was long since soaked through, his fingers wet and sticky, and the coppery smell of blood strong in his nose.  But still he kept moving, his instinct for survival strong, and his warrior’s body strong as well.  A lesser man would have been dead by now.

Still, there was only so much lifeblood a body could lose before even a warrior’s strength was not enough.  His hand scraping against the damp stone, he felt the tunnel begin to curve to the left, and he followed, stumbling, his breath shallow, his heart beginning to beat unevenly.  He recalled that a man bleeding to death will begin to gasp for air, as his veins grew empty.  He was close, then.

It seemed the floor was rising, as if he was moving uphill, and he struggled to stay upright just a little longer.  Aye, he was definitely climbing now, and up ahead there was a light, dim at first, then growing brighter as he came closer.  It was so dazzling, after days in the darkness, that it hurt his eyes.  A light.  Either he had finally found a way out, or he was dying.  At the moment, he had no idea which, but either was fine with him.  With the last of his strength, he moved towards the light, walking, then crawling, then dragging himself over the dirt.  Then he collapsed to the ground and the world went dark.

It was a warm summer evening in the highlands, and Willa MacReive was walking in the gardens of her father’s home.  Beside her was a man who claimed he would move the stars for her, if only she asked.  Somehow, she just didn’t believe him.

She looked up at Colm, and he smiled and took her hand in his.  He was handsome enough, with his fair hair and strong features.  Most women would scratch each other’s eyes out to have such a man, she mused.  At least the women she had known in London would.  And so far, he had been gentle and patient with her, well, as much as could be expected.  Why then, was she not feeling the way she
should
?  Instead of happiness, she felt doubt.  Instead of excitement, she was fairly certain she felt trepidation, as if her deepest instincts were trying to warn her.  Instead of love… nothing.  She sighed.  So that was it, then.  She didn’t love him now, and she never would.  She was through trying to ignore all of those instincts that were screaming at her to run the other way.  He had been courting her for weeks, but if after today she never saw him again, Willa knew she wouldn’t even care.  Her disappointment at the realization was mixed with an odd sense of relief.  Perhaps she had wanted so badly to be in love, to find someone to share her life with, that she had almost fooled herself for a time.  There was nothing else to do but to let him go; she wouldn’t hurt him by pretending any longer.

And she could not deny that she wasn’t even all that attracted to him.  She had already blossomed into the full flush of womanhood, with all of the feelings and needs that came with it.  The women of her family tended to be a bit hot-blooded, or so she’d been told, and she was no stranger to desire, or the hunger of her body for a man’s touch.  It was just that… Colm wasn’t the right man.  Every time he had tried to lie with her, she had refused him in the end.  The last time, she had really considered it.  Perhaps it was the intimacy that they lacked, maybe it
would
be good between them and then she would find it easier to accept her father’s choice of husband.  After all, what did she really know about such things?  Perhaps her lack of attraction to the man outside of the bedroom had no bearing on what happened in private.  She didn’t think so, but she had no experience to tell her otherwise.  But, it had been her fertile time of the month, and she could have gotten with child.  And then she would have been bound to him forever.
No… that had definitely not been worth the risk
.

And there, yet again, Willa, is your truth.

Looking up at a movement at the edge of her vision, she saw her brother, James, ride in through the gates, strong and tall.  Her heart swelled with pride.  Until a few short months ago, she didn’t even know she had a brother.  She had spent all of her childhood living in England with her Aunt Avida, and even her own father was a stranger to her now.  Her father had approved of the match with Colm, and perhaps a part of her had wanted to please him, to win his affection in some small way.  Her brother’s new wife, Maura, came out of the keep to greet him, and he practically leapt from the back of his horse to sweep her into his arms.

Her heart squeezed tight.
I want that… I want what they have…

She looked up at the man that her father had chosen for her.  She was not foolish or naive.  She knew her father had only accepted her back into the fold in order to use her as a political pawn, forging alliances and gaining land was all that mattered to him.  But she had few options if she wanted to survive in this world.  She could not go back to England; her aunt was gone.  She could not stay here, even though it had once been her mother’s home.  She had quickly discovered her father’s affections were not worth winning.  He would never hold any love for his daughter… his heart was too cold and cruel.  And… God help her… she would
not
sell herself to the highest bidder.  She would not let that be her life!  She had to at least try for something better… though how or what… well, she would just have to figure that out later.

Colm pulled her to a gentle stop in the shade of a willow tree, and out of the corner of her eye she saw her father’s guards move to a new position across the garden.  Colm saw them too and he frowned in irritation.  “Am I never to have ye alone to myself?”

No, you foolish man, my father wants to be sure you do not run off with the prize without first giving him the payment.
The thought suddenly made her sick.  Her stomach twisted and she felt trapped like a rabbit in a snare, the need to escape making her heart hammer against her chest.

Colm took her by the arms and turned her so that his back was to the guards, and his arms slid possessively around her waist.  When he bent to steal a kiss, Willa stopped him with both hands against his shoulders.

He pulled back, surprised.  “Lass, it’s only a kiss.”  He nodded toward the guards.  “They willna mind, ye ken that. I’ve kissed ye a hundred times before, in plain view.”  He reached for her again, but she slipped out of his grasp and backed away a few steps.

And a hundred times I felt nothing… except perhaps annoyance that you were kissing me yet again.

“No, it’s not that.  I… just don’t think… I’ve been having this feeling that maybe we’re not meant to be together”, she blurted out.  She watched as his eyes changed, from soft and doting to disbelieving… to something else altogether.  She took a nervous step back.

“What do ye mean, we’re no’ meant to be together?  Ye ken I have asked for yer hand!  Yer own father has blessed the match!  Ye are as good as mine already, Willa MacReive, and ye must ken how lucky ye are to marry so well, considering.”

Hmmm… the doting part was obviously an act
.  Willa mentally gave herself a pat on the back for her wisdom in deciding not to marry Colm.  Her instincts had been right all along.  She would be sure to follow them religiously from now on.

“I can’t marry you Colm.”  She shook her head slowly, taking another two steps back.  “I know now for certain, it’s nothing personal, you are just not my
destiny
.”

Willa’s eyes widened as she saw true anger flash across Colm’s features; something dark and unwelcoming.  Frightening, even.  If she had had any remaining doubts before as to the wisdom of her decision, they would have been gone in that instant.  She could see it in his eyes clearly now… being wed to this man would have been hell on earth.