Read To the Brink Online 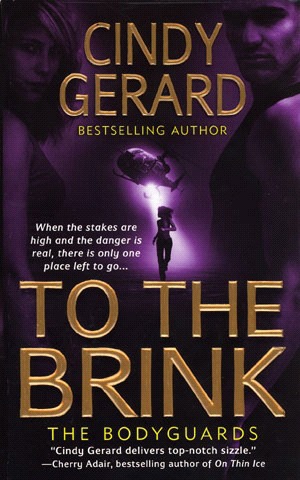 This book is dedicated to the brave men and women of the United States military who defend, on a daily basis, all that we hold dear.

I received an extraordinary amount of assistance from some equally extraordinary people who kindly provided me with relative details and countless hours of their time. I am blessed to call them friends.

Very special thanks go out to:

SSG Ian Trammell, USAREC, for his expertise and generosity of time and for being such a nice guy and stand-up soldier.

2nd. Lt., Ret. (Canadian Armed Forces) Darryl Hadfield, who didn't know me from Adam when I accosted him in cyberspace, and was still giving of his time and knowledge, and for his wonderful Web site: www.Rotorhead.org.

Rhodora (Doddie) Householder and Ana Angelica for their invaluable information on the beautiful Philippine Islands. Ladies, your gracious giving of time and detail is so very much appreciated. Thanks also to Marie Nicole Ryan and Sherry Weddle from the KOD/CNN loop for putting me in touch with these wonderful women.

Once again to Cynthia Clark, Psy.D., forensic psycho-pathologist, for her expert assistance in medical issues.

Susan Connell, dear friend and my source on all things Peru. Someday we will go there together. Heck, maybe we'll even take the guys along.

Leanne Banks, my book buddy. Thanks for the lift when I needed it most.

Kylie Brant and Roxanne Rustand, talented authors both and my conference roommates for life. Thanks for the grins and giggles and support but mostly for not posting certain New York City photos for all to see.

Any mistakes are mine and mine alone and would have been legions had it not been for the assistance of these wonderful people.

Darcy Prescott had known this call would be hard. She hadn't talked to Ethan Garrett in the five years since their divorce. So yeah, dialing his number had been good and hard; saying his name—even into his answering machine—was painful. Emotions strong with it made her voice break.

Gripping the receiver with both hands, she dug deep for a steadying breath. "Look. I... I think I might be in some trouble here."

The admission was as difficult to make as the phone call. Saying the words out loud gave them credence. It did horrible things to the rhythm of her heart, which had been getting a helluva workout in the past few hours.

That would show those misinformed souls who wondered in admiration and awe over her seemingly unflappable control.

If they could only see me now.

"Maybe some bad trouble," she confessed, still reluctant to believe it as she dragged a hand through her hair. "It's ... it's almost midnight here in Zamboanga. I can't... I can't think, you know, how that equates to West Palm Beach time. Maybe one in the afternoon? Two? I'm not sure."

She paused again when she heard a thread of hysteria creep back into her voice. She blinked up at the white ceiling of her hotel room.

God. This is great.
Piggybacked with her current state of mind—which was only a little to the left of full-blown terror—she felt like she was spiraling out of control.

Okay. That soaked it. She'd never dreamed
hysteria
would be a part of her vocabulary. Not in this lifetime—
which may not be all that long,
she reminded herself with a grim compression of her lips.

"Okay, look," she said, if not steadier, at least resolved to calm herself down. She absently repositioned the base of the phone on the rich mahogany nightstand sitting beside her bed. "I'm at the Garden Orchid Hotel. It's on ... let me think. Governor Camins Avenue. Here's the phone number.

"Look, Ethan. I—" She cut herself off as a tear surprised her and trickled down her cheek. She brushed it angrily away with the back of her hand. "Just call. And hurry."

She hung up the phone. For a long moment she sat motionless, staring at the cradled receiver. And praying that he would get her message.

Before it was too late.

It probably should have bothered her that her ex was the first person Darcy thought to call the moment she'd realized she had a problem. And it
might
have if she could function on a level separate from the fear. So far that wasn't happening.

This morning, she hadn't been afraid. This morning, she'd had her usual busy day in the Consulate office at the U.S. Embassy in Manila. But this morning, Amanda Stover had still been alive. When a coworker had called Darcy on her cell phone an hour ago and told her about Amanda's death, a cold chill had swept her from head to foot.

"How?" she'd asked, sinking down, in shock, on the hotel bed.

It had to be an accident,
she had told herself over and over, her heart hammering as she'd scrambled for her briefcase and dug out the envelope Amanda had given her just before Darcy had left the embassy to catch her flight to Zamboanga.

Darcy stared at the envelope she had promised Amanda she'd open as soon as she had time. The envelope she'd ripped open only moments ago.

The minute she'd read the note tucked inside, Darcy had known. The car that had killed Amanda hadn't done so by accident. Amanda had been murdered. And because Darcy suspected that she was now in possession of the reason Amanda had been killed ... she was also certain that she would be targeted as the next person to die.

With trembling fingers, she picked up the padded manila envelope she'd resealed as tight as Fort Knox. Then she addressed it and slapped on enough postage to send it to the moon. All the while she fought to gain the upper hand over a damnable rising panic.

Panic wasn't going to help her get out of this alive. Clear thinking was.

On a serrated breath she stood and walked across the room, her sandals sinking into the plush cream-colored carpeting. Slowly, she opened her hotel room door. She looked up and down the empty hall. Reasonably certain it was safe, she slipped outside and headed for the elevator.

Rudy Mar startled her as she hit the ground floor and stepped out of the elevator into a lobby done in soft tropical colors and more mahogany wood so deep reddish brown it was almost purple. She paused to see the night clerk standing at his post behind the polished registration desk where the older man appeared to be reading the
Manila Bulletin.

She always stayed at the Orchid when her duties took her from Manila to Zamboanga. She knew many of the staff on a first-name basis. Had learned that the Zamboangueiios were warm and friendly. As a rule, she enjoyed a little pleasant banter with Rudy Mar, whose chocolate brown eyes and salt-and-pepper hair made him look grandfatherly and kind.

Tonight, however, the rules had changed.

"Going out so late, miss?" Rudy Mar's wide smile was tempered with concern.

"Actually, I need to mail a letter."

Rudy Mar laid the newspaper on the granite top of the registration desk. Darcy thought of the headlines that would appear on tomorrow's edition:
U.S. Embassy Employee Victim of Hit-and-Run,
and her blood ran cold.

Her gaze snapped to back to Rudy Mar. His expectant look made her realize she'd completely tuned out something he'd said. She forced a smile. "I'm sorry ... what?"

"I said I'd be happy to take care of that for you. The letter," he clarified with a nod toward the envelope.

Involuntary reflexes had her clutching the envelope in question tighter. "Oh. Thank you, but I... I want to take a walk anyway, get a little air. I'll just drop it at the post office while I'm out."

She smiled in what she hoped was a credible impersonation of a woman who wasn't about to jump out of her skin.

"As you wish, Miss Prescott. Enjoy your walk. But stay on the main streets, all right?"

As she walked out the hotel door, Darcy understood both Rudy Mar's concern and his puzzlement over her actions. American embassy staff were often targets of terrorists in the Philippines and she was not employing hazardous-duty procedure. Normally she followed protocol to the letter—she buried her route to work in the mornings, alternated modes of transportation, and when out of Manila, as she was now, she would normally phone for a car and driver if she needed to go out.

Tonight, there wasn't time. She had to get the envelope out of her possession, in the mail, and get back to her room before Ethan called back. And the bigger problem: she no longer knew whom she could trust.

She cut a seemingly meandering path along the main streets, checking often to see if anyone was following her, hoping she'd spot a motorcab or a jeepney and could hitch a ride. One or the other would provide some cover and a little anonymity at the least and make her less of a target with a big bull's-eye on her back. Tonight, however, both were as scarce as taxis. So she walked. Fast.

It was a typical Philippine evening. Close, hot, tropical. The sidewalks had sucked in the sun's rays during the day and now breathed them back out like heat from a cooling oven. Darcy had dressed for the sweltering night in a white short-sleeve cotton T-shirt and khaki shorts. Still, her back was damp with perspiration. In her espadrille sandals, the soles of her feet were damp as well.

Another night, another time, she'd have enjoyed an evening stroll as she had many times in this beautiful place that was heralded as the city of flowers and reminded her of southern Florida. But this wasn't just any other night.

She caught a glimpse of herself in a storefront window and realized how tense she appeared. Determined not to draw attention to herself, she made her shoulders relax, deliberately slowed her pace in the face of a warning voice that cautioned her to hurry.

Struggling to ignore it, she walked on past a towering old cathedral rich with Spanish influence, past a more modern gift shop. The streets were, for the most part, deserted, but should anyone see her, they would see an American of average height, a little on the slim side, out for an evening stroll. No one special. Nothing remarkable. Except, maybe, for the auburn hair she'd cut to shoulder length a year ago when she'd started her Permanent Change of Station with the embassy in Manila.

Tonight more than ever before, she regretted the bureaucratic snafu that had restationed her from Mexico City to Manila. As she'd always done when her rotation was drawing to a close, she'd filled out her dream sheet requesting a PSC in Paris.
Paris, Philippines
—
easy to get the two mixed up,
she thought sourly, then sucked in her breath on a gasp when a cat sprang out of an alley and, yowling, ran in front of her.