Read To the Galactic Rim: The John Grimes Saga Online

To the Galactic Rim: The John Grimes Saga 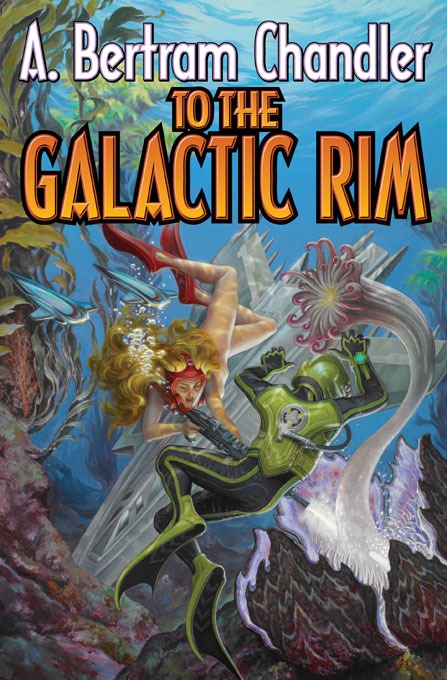 To the Galactic Rim (omnibus)

TO THE GALACTIC RIM

This is a work of fiction. All the characters and events portrayed

in this book are fictional, and any resemblance to real people or

To Prime the Pump, copyright ©1971 by A. Bertram Chandler.

The Broken Cycle, copyright ©1979 by A. Bertram Chandler.

To the galactic rim / A. Bertram Chandler.

THE
ROAD TO THE RIM

Lieutenant John Grimes
of the Federation Survey Service: fresh out of the Academy—and as green as they come!

“What do you think you’re playing at?”

“Captain,” said Wolverton, “I can no more than guess at what you intend to do—but I have decided not to help you do it.”

“Give me the initiator, Wolverton. That’s an order!”

“A
lawful
command, Captain? As lawful as those that armed this ship?”

. . . They hung there, clinging to each other, but more in hate than in love. Wolverton’s back was to the machine; he could not see, as could Grimes, that there was an indraught of air into the shimmering, spinning complexity. Grimes felt the beginnings of panic . . . all that mattered was that there was nothing to prevent him and Wolverton from being drawn into the machine. . . . Violently Grimes shoved away. To the action, there was a reaction . . .

When he had finished retching, Grimes forced himself to look again at the slimy, bloody obscenity that was a man turned inside out—heart still beating, intestines still writhing . . .

HIS UNIFORM
was new, too new, all knife-edged creases, and the braid and buttons as yet un-dimmed by time. It sat awkwardly upon his chunky body—and even more awkwardly his big ears protruded from under the cap that was set too squarely upon his head. Beneath the shiny visor his eyes were gray (but not yet hard), and his face, for all its promise of strength, was as yet unlined, had yet to lose its immature softness. He stood at the foot of the ramp by which he had disembarked from the transport that had carried him from the Antarctic Base to Port Woomera, looking across the silver towers that were the ships, interplanetary and interstellar, gleaming in the desert. The westering sun was hot on his back, but he did not notice the discomfort. There were the ships, the
real
ships—not obsolescent puddle-jumpers like the decrepit cruiser in which he, with the other midshipmen of his class, had made the training cruise to the moons of Saturn. There were the ships, the star ships, that spun their web of commerce from Earth to the Centaurian planets, to the Cluster Worlds, to the Empire of Waverley, to the Shakespearian Sector and beyond.

(But they’re only merchantmen,
he thought, with a young man’s snobbery.)

He wondered in which one of the vessels he would be taking passage. Merchantman or not, that big ship, the one that stood out from her neighbors like a city skyscraper among village church steeples, looked a likely enough craft. He pulled the folder containing his orders from his inside breast pocket, opened it, read (not for the second time, even), the relevant page.

. . .
you are to report on board the Interstellar Transport Commission’s
Delta Orionis . . .

He was not a spaceman yet, in spite of his uniform, but he knew the Commission’s system of nomenclature. There was the
Alpha
class, and the
Beta
class, and there were the
Gamma
and
Delta
classes. He grinned wryly. His ship was one of the smaller ones. Well, at least he would not be traveling to Lindisfarne Base in an
Epsilon
class tramp.

Ensign John Grimes, Federation Survey Service, shrugged his broad shoulders and stepped into the ground car waiting to carry him and his baggage from the airport to the spaceport.

GRIMES LOOKED
at the officer standing just inside
Delta Orionis’
airlock, and she looked at him. He felt the beginnings of a flush spreading over his face, a prickling of the roots of his close-cropped hair, and felt all the more embarrassed by this public display of his embarrassment. But spaceborn female officers, at this time, were almost as scarce as hens’ teeth in the Survey Service—and such few as he had met all looked as though they shared a common equine ancestry. It was all wrong, thought Grimes. It was unfair that this girl (this attractive girl) should already be a veteran of interstellar voyages while he, for all his uniform and commission, should be embarking upon his first, his very first trip outside the bounds of the Solar System. He let his glance fall from her face (but not without reluctance), to the braid on her shoulderboards. Gold on a white facing. So it wasn’t too bad. She was only some sort of paymaster—or, to use Merchant Service terminology, only some sort of purser.

“ . . . of the Federation Survey Service,” she finished for him. “But you are all potential admirals.” There was the faintest of smiles flickering upon her full lips, a barely discernible crinkling at the corners of her eyes.
Her brown eyes,
thought Grimes.
Brown eyes, and what I can see of her hair under that cap seems to be auburn . . .

She glanced at her wristwatch. She told him, her voice now crisp and businesslike, “We lift ship in precisely ten minutes’ time, Ensign.”

“I’ll look after that, Mr. Grimes. Meanwhile, Captain Craven sends his compliments and invites you to the Control Room.”

“Thank you.” Grimes looked past and around the girl, trying to discover for himself the door that gave access to the ship’s axial shaft. He was determined not to ask.

“It’s labeled,” she told him with a faint smile. “And the cage is waiting at this level. Just take it up as far as it goes, then walk the rest. Or do you want a pilot?”

“I can manage,” he replied more coldly than he had intended, adding, “thank you.” He could see the sign over the door now. It was plain enough. AXIAL SHAFT. So was the button that he had to press to open the door—but the girl pressed it for him. He thanked her again—and this time his coldness was fully intentional—and stepped into the cage. The door slid shut behind him. The uppermost of the studs on the elevator’s control panel was marked CAPTAIN’S DECK. He pushed it, then stood there and watched the lights flashing on the panel as he was swiftly lifted to the nose of the ship.

When he was carried no further he got out, found himself on a circular walk surrounding the upper extremity of the axial shaft. On the outside of the shaft itself there was a ladder. After a second’s hesitation he climbed it, emerged through a hatch into the control room.

It was like the control room of the cruiser in which he had made his training cruise—and yet subtly (or not so subtly), unlike it. Everything— but so had it been aboard the Survey Service vessel—was functional, but there was an absence of high polish, of polishing for polishing’s sake. Instruments gleamed—but it was the dull gleam that comes from long and continual use, and matched the dull gleam of the buttons and rank marks on the uniforms of the officers already seated at their stations, the spacemen to whom, after all, a uniform was no more (and no less), than an obligatory working rig.

The big man with the four gold bars on each shoulder half turned his head as Grimes came up through the hatch. “Glad to have you aboard, Ensign,” he said perfunctorily. “Grab yourself a seat—there’s a spare one alongside the Mate’s. Sorry there’s no time for introductions right now. We’re due to get upstairs.”

“Here!” grunted one of the officers.

Grimes made his way to the vacant acceleration chair, dropped into it, strapped himself in. While he was so doing he heard the Captain ask, “All secure, Mr. Kennedy?”

“Then why the hell not?”

“Are you?” Then, with a long-suffering sigh, “I suppose she’s still tucking some passenger into her—or
his—
bunk . . . .”

“She could still be stowing some passenger’s gear, sir,” contributed Grimes. “Mine,” he added.

“Indeed?” The Captain’s voice was cold and elaborately uninterested.

Over the intercom came a female voice. “Purser to Control. All secure below.”

“And bloody well time,” grumbled the shipmaster. Then, to the officer at the transceiver, “Mr. Digby, kindly obtain clearance.”

“Obtain clearance, sir,” acknowledged that young man brightly. Then, into his microphone,
“Delta Orionis
to Port Control. Request clearance to lift ship. Over.”

“Port Control to
Delta Orionis.
You may lift. Bon voyage. Over.”

“Thank you, Port Control. Over and out.”

Then the ship was throbbing to the rhythmic beat of her Inertial Drive, and Grimes felt that odd sense of buoyancy, of near weightlessness, that persisted until the vessel broke contact with the ground—and then the still gentle acceleration induced the reverse effect. He looked out through the nearest viewport. Already the ocher surface of the desert, streaked by the long, black shadows of ships and spaceport buildings, was far below them, with the vessels and the immobile constructions looking like toys, and one or two surface vehicles like scurrying insects. Far to the north, dull-ruddy against the blue of the sky, there was a sandstorm.
If that sky were darker,
thought Grimes,
this would look like Mars,
and the mental comparison reminded him that he, too, was a spaceman, that he, too, had been around (although only within the bounds of Sol’s planetary system). Even so, he was Survey Service, and these others with him in Control were only merchant officers, fetchers and carriers, interstellar coach and truck drivers. (But he envied them their quiet competency.)

Still the ship lifted, and the spaceport below her dwindled, and the land horizon to the north and the now visible sea horizon to the south began to display the beginnings of curvature. Still she lifted, and overhead the sky was dark, and the first bright stars, Sirius and Canopus, Alpha and Beta Centauri, were sparkling there, beckoning, as they had beckoned for ages immemorial before the first clumsy rocket clambered heavenward up the ladder of its own fiery exhaust, before the first airplane spread its flimsy wings, before the first balloon was lifted by the hot, expanding gases from its airborne furnace . . . .

“Mr. Grimes,” said the Captain suddenly, his voice neither friendly nor unfriendly.

“We lift on I.D. until we’re clear of the Van Allens.”

“I know, sir,” said Grimes—then wished that he could unsay the words. But it was too late. He was conscious of the shipmaster’s hostile silence, of the amused contempt of the merchant officers. He shrank into his chair, tried to make himself as inconspicuous as possible. The ship’s people talked among themselves in low voices, ignoring him. They allowed themselves a period of relaxation, producing and lighting cigarettes. Nobody offered the Ensign one.

Sulkily he fumbled for his pipe, filled it, lighted it. The Chief Officer coughed with quite unnecessary vigor. The Captain growled, “Put that out, please,” and muttered something about stinking out the control room. He, himself, was puffing at a villainous black cigar.