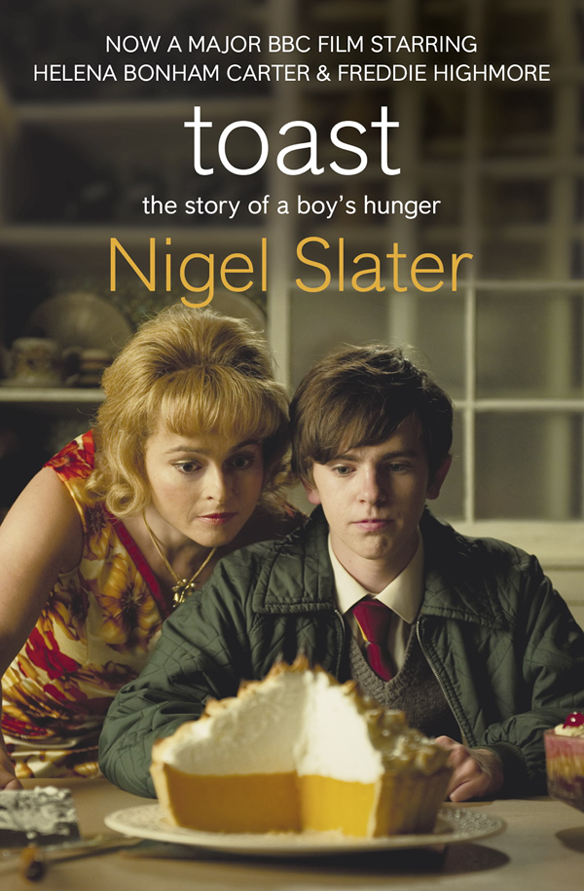 The story of a boy's hunger

For Digger, Magrath and Poppy
with love

Crisps, Ketchup and a Few Other Unmentionables

The Day the Gardener Came

The Night Just Before Christmas

The Lion, the Witch and the Wardrobe

The Day She Darned Dad's Socks

The Man in the Woods

The Two of Us

Apple Pie and a Wake-up Call

A Sniff of Basil

By the same Author

My mother is scraping a piece of burned toast out of the kitchen window, a crease of annoyance across her forehead. This is not an occasional occurrence, a once-in-a-while hiccup in a busy mother's day. My mother burns the toast as surely as the sun rises each morning. In fact, I doubt if she has ever made a round of toast in her life that failed to fill the kitchen with plumes of throat-catching smoke. I am nine now and have never seen butter without black bits in it.

It is impossible not to love someone who makes toast for you. People's failings, even major ones such as when they make you wear short trousers to school, fall into insignificance as your teeth break through the rough, toasted crust and sink into the doughy cushion of white bread underneath. Once the warm, salty butter has hit your tongue, you are smitten. Putty in their hands.

Mum never was much of a cook. Meals arrived on the table as much by happy accident as by domestic science. She
was a chops-and-peas sort of a cook, occasionally going so far as to make a rice pudding, exasperated by the highs and lows of a temperamental cream-and-black Aga and a finicky little son. She found it all a bit of an ordeal, and wished she could have left the cooking, like the washing, ironing and dusting, to Mrs P., her âwoman what does'.

Once a year there were Christmas puddings and cakes to be made. They were made with neither love nor joy. They simply had to be done. âI suppose I had better DO THE CAKE,' she would sigh. The food mixer â she was not the sort of woman to use her hands â was an ancient, heavy Kenwood that lived in a deep, secret hole in the kitchen work surface. My father had, in a rare moment of do-it-yourselfery, fitted a heavy industrial spring under the mixer so that when you lifted the lid to the cupboard the mixer slowly rose like a corpse from a coffin. All of which was slightly too much for my mother, my father's quaint Heath Robinson craftsmanship taking her by surprise every year, the huge mixer bouncing up like a jack-in-the-box and making her clap her hands to her chest. âOh heck!' she would gasp. It was the nearest my mother ever got to swearing.

She never quite got the hang of the mixer. I can picture her now, desperately trying to harness her wayward Kenwood, bits of cake mixture flying out of the bowl like something from an
I Love Lucy
sketch. The cake recipe was written in green biro on a piece of blue Basildon Bond and was kept, crisply folded into four, in the spineless
Aga
Cookbook
that lived for the rest of the year in the bowl of the mixer. The awkward, though ingenious, mixer cupboard was impossible to clean properly, and in among the layers of flour and icing sugar lived tiny black flour weevils. I was the only one who could see them darting around. None of which, I suppose, mattered if you were making Christmas pudding, with its gritty currants and hours of boiling. But this was cake.

Cooks know to butter and line the cake tins before they start the creaming and beating. My mother would remember just before she put the final spoonful of brandy into the cake mixture, then take half an hour to find them. They always turned up in a drawer, rusty and full of fluff. Then there was the annual scrabble to find the brown paper, the scissors, the string. However much she hated making the cake we both loved the sound of the raw cake mixture falling into the tin. âShhh, listen to the cake mixture,' she would say, and the two of us would listen to the slow plop of the dollops of fruit and butter and sugar falling into the paper-lined cake tin. The kitchen would be warmer than usual and my mother would have that I've-just-baked-a-cake glow. âOh, put the gram on, will you, dear? Put some carols on,' she would say as she put the cake in the top oven of the Aga. Carols or not, it always sank in the middle. The embarrassing hollow, sometimes as deep as your fist, having to be filled in with marzipan.

Forget scented candles and freshly brewed coffee. Every home should smell of baking Christmas cake. That, and
warm freshly ironed tea towels hanging on the rail in front of the Aga. It was a pity we had Auntie Fanny living with us. Her incontinence could take the edge off the smell of a chicken curry, let alone a baking cake. No matter how many mince pies were being made, or pine logs burning in the grate, or how many orange-and-clove pomanders my mother had made, there was always the faintest whiff of Auntie Fanny.

Warm sweet fruit, a cake in the oven, woodsmoke, warm ironing, hot retriever curled up by the Aga, mince pies, Mum's 4711. Every child's Christmas memories should smell like that. Mine did. It is a pity that there was always a passing breeze of ammonia.

Cake holds a family together. I really believed it did. My father was a different man when there was cake in the house. Warm. The sort of man I wanted to hug rather than shy away from. If he had a plate of cake in his hand I knew it would be all right to climb up on to his lap. There was something about the way my mother put a cake on the table that made me feel that all was well. Safe. Secure. Unshakeable. Even when she got to the point where she carried her Ventolin inhaler in her left hand all the time. Unshakeable. Even when she and my father used to go for long walks, walking ahead of me and talking in hushed tones and he would come back with tears in his eyes.

When I was eight my mother's annual attempt at icing the family Christmas cake was handed over to me. âI've had enough of this lark, dear, you're old enough now.' She
had started to sit down a lot. I made only marginally less of a mess than she did, but at least I didn't cover the table, the floor, the dog with icing sugar. To be honest, it was a relief to get it out of her hands. I followed the Slater house style of snowy peaks brought up with the flat of a knife and a red ribbon. Even then I wasn't one to rock the boat. The idea behind the wave effect of her icing was simply to hide the fact that her attempt at covering the cake in marzipan resembled nothing more than an unmade bed. Folds and lumps, creases and tears. A few patches stuck on with a bit of apricot jam.

I knew I could have probably have flat-iced a cake to perfection, but to have done so would have hurt her feelings. So waves it was. There was also a chipped Father Christmas, complete with a jagged lump of last year's marzipan round his feet, and the dusty bristle tree with its snowy tips of icing. I drew the line at the fluffy yellow Easter chick.

Baking a cake for your family to share, the stirring of cherries, currants, raisins, peel and brandy, brown sugar, butter, eggs and flour, for me the ultimate symbol of a mother's love for her husband and kids, was reduced to something that âsimply has to be done'. Like cleaning the loo or polishing the shoes. My mother knew nothing of putting glycerine in with the sugar to keep the icing soft, so her rock-hard cake was always the butt of jokes for the entire Christmas. My father once set about it with a hammer and chisel from the shed. So the sad, yellowing cake sat
round until about the end of February, the dog giving it the occasional lick as he passed, until it was thrown, much to everyone's relief, on to the lawn for the birds.

My mother is buttering bread for England. The vigour with which she slathers soft yellow fat on to thinly sliced white pap is as near as she gets to the pleasure that is cooking for someone you love. Right now she has the bread knife in her hand and nothing can stop her. She always buys unwrapped, unsliced bread, a pale sandwich loaf without much of a crust, and slices it by hand.

The strange thing is that none of us really eats much bread and butter. It's like some ritual of good housekeeping that my mother has to go through. As if her grandmother's dying words had been âalways make sure
they have enough bread and butter on the table'. No one ever sees what she does with all the slices we don't eat.

I mention all the leftover bread and butter to Mrs Butler, a kind, gentle woman whose daughter is in my class at school and whose back garden has a pond with newts and goldfish, crowns of rhubarb and rows of potatoes. A house that smells of apple crumble. I visit her daughter Madeleine at lunchtime and we often walk back to school together. Mrs Butler lets me wait while Madeleine finishes her lunch.

I love bread-and-butter pudding. I love its layers of sweet, quivering custard, juicy raisins, and puffed, golden crust. I love the way it sings quietly in the oven; the way it wobbles on the spoon.

You can't smell a hug. You can't hear a cuddle. But if you could, I reckon it would smell and sound of warm bread-and-butter pudding.

A Star Shall Fall by Marie Brennan
A Moment in the Sun by John Sayles
Star Wars: The Old Republic: Revan by Drew Karpyshyn
Tethered (J + P series) by D.A. Roach
The Canary Caper by Ron Roy
Shatterproof by Roland Smith
Ghost of a Promise by Moran, Kelly
Louis Riel and Gabriel Dumont by Joseph Boyden
Fire in the Hills by Donna Jo Napoli
Fury to the Stars (Universe in Flames Book 2) by Christian Kallias