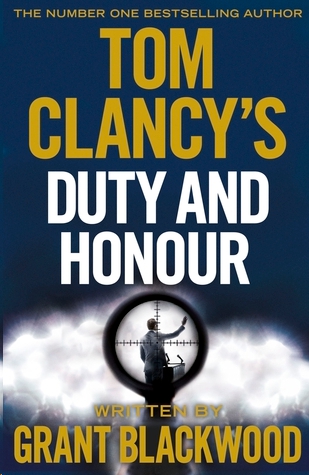 The Hunt for Red October

The Cardinal of the Kremlin

The Sum of All Fears

The Bear and the Dragon

The Teeth of the Tiger

Dead or Alive
(with Grant Blackwood)

Against All Enemies
(with Peter Telep)

Locked On
(with Mark Greaney)

Submarine: A Guided Tour Inside a Nuclear Warship

Armored Cav: A Guided Tour Inside an Armored Cavalry Regiment

Marine: A Guided Tour of a Marine Expeditionary Unit

Airborne: A Guided Tour of an Airborne Task Force

Carrier: A Guided Tour of an Aircraft Carrier

Into the Storm: A Study in Command
with General Fred Franks, Jr. (Ret.) and Tony Koltz 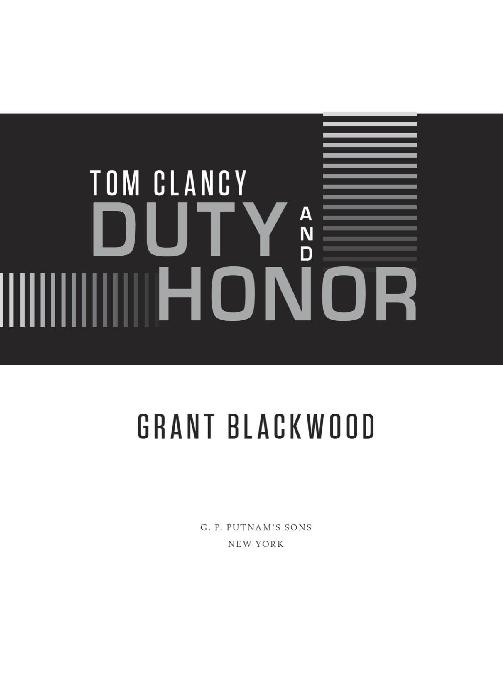 J
ack Ryan, Jr., would later wonder what exactly had saved his life that night. One thing was certain: It hadn’t been skill. Maybe the heft of the bok choy had bought him a split second, maybe the mud, but not skill. Dumb luck. Survival instinct.

The Supermercado was neither in his neighborhood nor near his frequent errand stops, but it did have the best selection of fruits and vegetables in Alexandria—so Ding Chavez had told him eight months ago, yet it had been only recently, since his forced leave of absence from The Campus, that he’d become a believer. Being unemployed had given him a lot to think about and plenty of time to broaden his horizons. The one frontier he’d so far refused to explore despite
his sister Sally’s exhortations was binge-watching
Girls
on HBO. That was his Rubicon. No crossing the river for the Roman legions, no chick TV for Jack Ryan. Soon, though, he’d have to make a decision about his loose-ends lifestyle. Another couple weeks and his probation would be over. Gerry Hendley would want an answer: Was he coming back to The Campus, or were they parting company permanently?

And do what?
Jack thought.

He’d spent most of his adult life working at The Campus, aka Hendley Associates, first as an analyst and then as an operations officer—a field spook. The off-the-books counterterror organization had been created by his father, President Jack Ryan, and had since its inception been overseen by former senator Gerry Hendley. So far they’d had a lot of success going after some of the world’s “big bads” while still managing to make a decent profit not just for their clients, all of whom knew Hendley only as a financial arbitrage company, but also for The Campus’s covert operational budget.

“Seventeen fifty,” the cashier told him.

Jack handed her a twenty, took his change, then collected his brown-paper sack from the glum teenage bagger and headed for the door. It was just past eight p.m. and the store was almost deserted. Through the broad front windows he could see rain glittering in the glow of the parking lot’s sodium-vapor lights. Accompanied by a cold front, rain had been falling in Alexandria for three straight days. Creeks
were swollen and the DIY stores nearest the Potomac were seeing a jump in sandbag sales. Perfect weather for homemade slow-cooker chili. He’d just put in a solid eight miles on his gym’s indoor track, followed by a twenty-minute circuit of push-ups, pull-ups, and planks, and he hoped to turn his bag full of ground beef, beans, peppers, onions, tomatoes, and bok choy—his mom’s most recent superfood recommendation—into a reward for all his sweat. The chili wouldn’t be ready until tomorrow; tonight, Chinese-takeout leftovers.

The automatic door slid open and Jack used his free hand to pull his sweatshirt’s hood over his head. It was a short walk to his car—a black Chrysler 300 and the first sedan he’d owned in a long time—and then a fifteen-minute drive back to his condo at the Oronoco. The parking lot’s surface was new and its fresh coat of asphalt shimmered black under the slick of rain. Moving at a half-jog, feeling the chilled rain running down his chin and into his shirt, Jack covered the thirty yards to his car, which he’d parked trunk-first against the guardrail. Old habits, he thought. Be ready to leave quickly; know your closest exits and highways. Months of “civilian” life and still a lot of the fieldcraft rules John Clark and the rest had taught him hadn’t faded. Did this tell Jack something? Was this just a shadow of a habit, or inclination?

As he neared his car, he saw a sheet of white paper stuck under his windshield wiper. A flyer—food drive, garage sale,
voting reminder . . . Whatever it was, Jack wasn’t in the mood. He leaned sideways and reached for the flyer. Sodden, it tore free in a clump, leaving a narrow strip trapped beneath the wiper blade.

Revolution's Shore by Kate Elliott
The Night Watch by Sarah Waters
Blood from Stone by Laura Anne Gilman
Short Bus Hero by Shannon Giglio
This Town by Mark Leibovich
The Veil by Cory Putman Oakes
A List of Things That Didn't Kill Me by Jason Schmidt
Mrs. Jeffries in the Nick of Time by Emily Brightwell
Arise (Awakened Fate Book 4) by Skye Malone
Indian Killer by Sherman Alexie