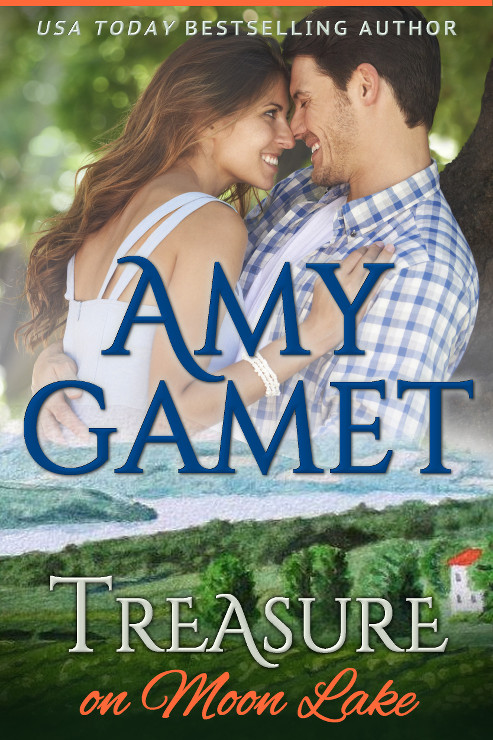 To Brian and Rene,

for giving me the time I need to follow my dreams.

Many thanks to my mother, Dale Richards, for letting me use her beautiful painting on the cover of this book.

Special thanks to Jen Townsend, a very talented artist who was kind enough to share her knowledge of jewelry making with me for my research.

True love is hiding where you least expect to find it...

Jewelry designer Tori Henderson's first year in business was far more expensive than she could have imagined. Faced with closing the doors of Tori's Treasures, she sinks her last dollar into one final promotion–a widely publicized treasure hunt for a chest of fine, handmade jewelry that could drum up enough business to get her back in the black... or kill her shop once and for all.

The last thing she needs is her mother's announcement that she's engaged to Edward Trainor, the father of Tori's long ago summer crush, Gabe - a man who regularly makes his way into Tori's dreams some ten years later.

Corporate tycoon Jed Trainor has no intention of attending his estranged father's wedding, and he certainly doesn't need to see his half-brother Gabe after the other man put the moves on Jed's one-time fiancée. But with business problems looming, Jed needs time to think, and the small town of Moon Lake seems like the perfect place to hide away while he figures out how to save his empire.

The last thing he needs is the distraction of a beautiful woman who thinks she's in love with his half-brother.

Tori is determined to win Gabe's heart, but Jed has other plans. When they learn Gabe is bringing a date to the wedding, Jed offers to bring Tori himself, knowing any woman on his arm is sure to be on Gabe's radar. But his ploy for her attention just may blow up in his face. Can Jed prove to Tori he's the Trainor brother she really belongs with?

Your email address will not be used for any other purpose.

Check out the rest of Amy Gamet’s books on Nook

Tori Henderson was standing in the middle of her gift shop, the feather duster in her hand long-since forgotten. She blinked, her eyes staying closed too long, trying to make sense of her mother’s words. “Excuse me?”

“
Married
.” Her mother smiled and bit her lip at the same time, making her look far younger than she was. “I’m getting married. I probably should have said something sooner, but I wanted to tell you in person.”

Her mom had just returned from an extended trip around the country, the first surprising thing Bonnie had done in years.

This was the second.

Her mom touched her arm. “Do you remember the Trainors? They rented Suzie and Bill’s place years ago, when you were in high school? Edward and his son?”

How could she forget?

Gabe Trainor, eighteen and the sexiest boy alive, with abs like a marble statue and a smile that made every girl swoon. He’d been her first kiss, her first love. She felt her cheeks flush.

That was the summer before her dad passed away, when she still thought life was fair and love was forever and one single summer could change everything. It had taken her years to get over Gabe. Truth be told, she still thought of him sometimes, pretending he was in the car sitting next to her on a long drive, or featuring him prominently in her dreams, though she’d never admitted it to anyone, not even her best friend, Melanie.

“Summer before junior year,” Tori said. Did her mother even know about her relationship with Gabe, or had she been so absorbed in Dad’s failing health that she’d been oblivious?

“I ran into Edward in Tahoe, and…we hit it off, sweetheart. He came with me on the rest of my trip.”

Her mother was in love with Gabe Trainor’s father!

Tori felt lightheaded. Of all the people in the world, what were the chances that mother and daughter would fall for father and son?

“I am happy for you Mom,” she heard herself say.

Her mother wrapped her in a big, swaying hug. “Oh, good. I couldn’t bear it if you were upset.”

Her mother laughed, her giggle trailing like a schoolgirl’s. “The ceremony’s two weeks from Friday.”

Tori pulled back. “Two weeks from Friday! Why so fast?”

Bonnie laughed. “It doesn’t feel fast at all, from where I’m standing. Maybe at my age you just know when something’s right, and you don’t need to hem and haw and wait to see anymore. You just do it. He makes me happy, Tori. I love him, and I didn’t think I’d ever find love again after losing your father.”

Tori’s mind was racing. Her mother was marrying Gabe Trainor’s dad. She sucked in a breath.

Gabe would be at the ceremony.

She suddenly felt a little sick.

Her mother was talking. “I want your help with the reception. Would you, please? No one could make it as wonderful as you.”

“You make everything so beautiful. I mean, look at this place! Do you know how proud of you I am for what you’ve accomplished with Tori’s Treasures?” she gestured around her to the shop. “I want some of this glamour on my big day.”

Her mother was proud of her?

She wouldn’t be so proud if she knew I was about to lose everything.

Forcing her worries aside, she trained her focus on her mother’s smiling face. There was a shadow of apprehension there. Bonnie needed her blessing, needed to hear it was okay to love another man besides Tori’s father. Tori reached out to tuck a long gray curl behind her mother’s ear. “I’m happy for you, Mom.”

“You’ll help with the reception?”

Tori cringed. That was just two days before the town festival, the culmination of the treasure hunt promotion she was banking on to save her shop. She was already swamped with details for that.

But her mother called her work beautiful.

She said she was proud.

For Tori, the girl who was best known for her failures, those were heady words she didn’t want to let go of.

I’ll show her I can do this, that I can handle responsibility without screwing anything up.

Tori nodded. “Of course. I’ll do everything I can to help.” Even as she said the words, she feared she was biting off more than she could chew.

“Oh, I’m so grateful. Edward’s sons are coming to town for the wedding, and I want to make sure everything’s perfect.”

“Sons? I thought there was just Gabe.”

“No, he has another son, Jed, by his first wife.” Her mother patted her hand. “Don’t worry, I’m sure you kids will get along just fine.”

Jed Trainor slammed his fist onto his polished wood desk. “You can’t just walk in here and expect me to hand you the company I’ve spent ten years building up from nothing.”

The other man crossed his legs and leaned back. “The merger of McConnell and Howard Longman gives us a major shareholder stake in Trainor Enterprises. We now own fifty-two percent of the company. You can either agree to a peaceable settlement…”

“Or you’ll shut me out in a hostile takeover.”

Rage seeped out of Jed’s pores, but he forced his lips to remain closed. Nothing good could come of giving Henry the tongue-lashing he so richly deserved. They were friends. They’d wanted the same things for so long.

Or so he’d thought.

What he needed was time to think, to strategize.

Trainor Enterprises was everything to him, his love, his life, his ambition. Wasn’t that what his ex-fianc
é
said over and over again? More of his self-worth was tied up in this place than he cared to examine too closely, and he resented the fact that someone else had crawled up inside it like some Trojan horse.

I should have seen it coming.

A knock at the door and it opened.

He raised his hand. “Not now, Bridget.”

“Sir, your brother is on the phone.”

Jed frowned, a fresh anxiety tingling up his spine. He hadn’t talked to Gabe in over a year, but here he was, calling in the middle of a workday out of the blue.

Maybe he wants to apologize.

Or maybe the old man is dead.

The thought brought with it a surprising sadness. The boy inside him was still waiting for Edward to be a better man, to remember he had two sons instead of one, even though Jed should have long since moved on.

A picture appeared in Jed’s mind, a photograph that sat on his father’s desk. Edward and wife-number-three, decked out in boating outfits like models in a catalog. Gabe had been in the picture, too.

Gabe was always in the picture.

Jed had never been on that boat, but he’d all but memorized that photo, as it stood in such sharp contrast to his own reality.

He shook his head.
Water under the bridge.

“Put him through. Henry was just leaving.”

“We have more to discuss.”

Henry jerked his head back, but he picked up his briefcase and made his way to the door, Bridget following him out.

The phone on his desk began to ring and he picked it up. “Trainor,” he answered.

Jed’s stomach sank. He hadn’t talked to Edward since last Christmas, and only then because the old man had invited him to dinner. Jed had reluctantly agreed and sat in stunned silence as Edward cracked crab legs and explained that he wanted to mend fences, have a real relationship.

It was everything Jed ever wanted from his father, all tied up with a bow and delivered, thirty Christmases too late.

Temporary Fix by Allie Standifer
Of Minds and Language by Piattelli-Palmarini, Massimo; Uriagereka, Juan; Salaburu, Pello
Sweet Solace (The Seattle Sound Series Book 1) by Alexa Padgett
The Dead Season by Donna Ball
The Great Good Summer by Liz Garton Scanlon
Touched by Fire by Irene N.Watts
THE INVITATION (The Marriage Diaries, Volume 5) by Wilde, Erika
The Perfect Mate by Black, C. E.
Therapy Ever After (Therapy #1.5) by Kathryn Perez
Hungry as the Sea by Wilbur Smith