THE TEMERAIRE SERIES BY NAOMI NOVIK 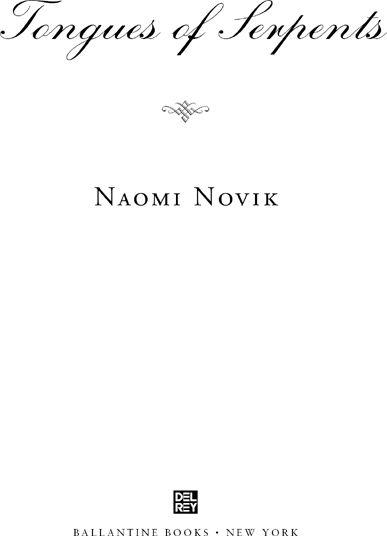 For my father, Samuel Novik,
who also came over the sea to another country

I am hugely grateful to my longtime beta readers Georgina Paterson and Vanessa Len, who not only tromped all over the Blue Mountains with me, but helped me work out the plot for the last three forthcoming books of the Temeraire series over lunch in Sydney. Possibly drinks were involved also? (To determine whether or not this was a good thing, you will have to wait for me to write them.)

Many thanks for beta-reading also to Meredith Lynne and Alison Feeney, and to the wonderful Terri Oberkamper for all her help; and I am so thrilled to once again have Dominic Harman’s amazing cover art! Much love and gratitude to my fantastic editor, Betsy Mitchell, at Del Rey and my wonderful agent, Cynthia Manson, and a special thank-you to Rachel Kind, who has shepherded my books all over the world. Rachel, my crammed-full bookshelves might not be grateful, but I am!

And most of all to Charles, who gives me daily more gifts than words can ever adequately convey.

I have taken the liberty of marking the route of our journey upon a simplified version of the most extraordinary and beautiful map of the continent published by the late Mr. Matthew Flinders, of the
Investigator
, in his work
A voyage to Terra Australis
, omitting the soundings and those geographical features of the coastline which have therein been more thoroughly examined.

I must apologize to the reader for the incompleteness and undoubted inaccuracies of my annotations, which do not adequately represent the native holdings nor the variety and number of the tribes; I can only offer as my excuse that these observations were made at a young age, during a journey with no translator or guide, and my opportunities for research were regrettably limited and have not since been improved upon…

However, I think my information sufficient to illusttate the entire folly, which at present seems to dominate conversation regarding the interior, of asserting the presence of a vast central inland sea, either fresh or salt, which should conveniently lend itself to farming. The lake which I have marked upon the map was the only sizeable body of water which we encountered upon our journey, and proved only seasonally potable. That the extraordinary aridity of the weather which we encountered, barring a handful of brief and unproductive storms, is rather a regular condition than an unusual case, is a supposition borne out not only by the testimony of all the natives with whom we had conversation, but by the most peculiarly adapted behavior of the local fauna, as my record will further demonstrate. 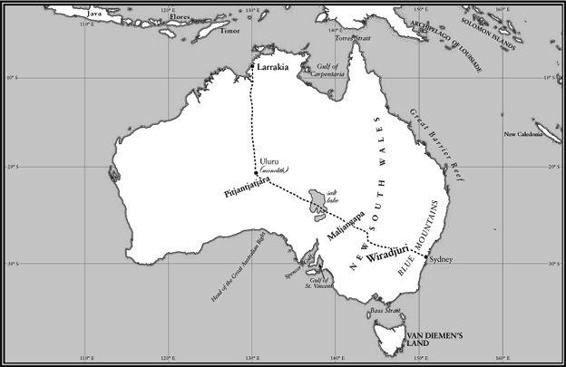 T
HERE WERE FEW STREETS
in the main port of Sydney which deserved the name, besides the one main thoroughfare, and even that bare packed dirt, lined only with a handful of small and wretched buildings that formed all the permanence of the colony. Tharkay turned off from this and led the way down a cramped, irregularly arranged alley-way between two wooden-slat buildings to a courtyard full of men drinking, in surly attitudes, under no roof but a tarpaulin.

Along one side of the courtyard, the further from the kitchens, the convicts sat in their drab and faded duck trousers, dusty from the fields and quarries and weighted down with fatigue; along the other, small parties of men from the New South Wales Corps watched with candidly unfriendly faces as Laurence and his companions seated themselves at a small table near the edge of the establishment.

Besides their being strangers, Granby’s coat drew the eye: bottle-green was not in the common way, and though he had put off the worst excesses of gold braid and buttons with which Iskierka insisted upon adorning him, the embroidery at cuffs and collar could not be so easily detached. Laurence wore plain brown, himself: to make a pretense of standing in the Aerial Corps now was wholly out of the question, of course, and if his dress raised questions concerning his situation, that was certainly no less than honest, as neither he nor anyone else had yet managed to work out what that ought in any practical sense to be.

“I suppose this fellow will be here soon enough,” Granby said, unhappily; he had insisted on coming, but not from any approval of the scheme.

“I fixed the hour at six,” Tharkay answered, and then turned his
head: one of the younger officers had risen from the tables and was coming towards them.

Eight months aboard ship with no duties of his own and shipmates nearly united in their determination to show disdain had prepared Laurence for the scene which, with almost tiresome similarity, unfolded yet again. The insult itself was irritating for demanding some answer, more than anything else; it had not the power to wound in the mouth of a coarse young boor, stinking of rum and visibly unworthy to stand among even the shabby ranks of a military force alternately called the Rum Corps. Laurence regarded Lieutenant Agreuth only with distaste, and said briefly, “Sir, you are drunk; go back to your table, and leave us at ours.”

There the similarity ended, however: “I don’t see why I,” Agreuth said, his tongue tangling awkwardly, so he had to stop and repeat himself, speaking with excessive care, “why I should listen to anything out of a piss-pot whoreson traitor’s fucking mouth—”

Laurence stared, and heard the tirade with mounting incredulity; he would have expected the gutter language out of a dockyard pickpocket in a temper, and hardly knew how to hear it from an officer. Granby had evidently less difficulty, and sprang to his feet saying, “By God, you will apologize, or for halfpence I will have you flogged through the streets.”

“I would like to see you try it,” Agreuth said, and leaning over spat into Granby’s glass; Laurence stood too late to catch Granby’s arm from throwing it into Agreuth’s face.

That was of course an end to even the barest hope or pretense of civility; Laurence instead pulled Granby back by his arm, out of the way of Agreuth’s wildly swinging fist, and letting go struck back with the same hand, clenched, as it came again at his face.

He did not hold back; if brawling was outrageous, it looked inevitable, and he would as soon have it over with quickly. So the blow was armed with all the strength built up from childhood on rope-lines and harness, and Laurence knocked Agreuth directly upon the jaw: the lieutenant lifted half-an-inch from the ground, his head tipping back and leading the rest of his frame. Stumbling a few steps as he came down, he pitched face-front onto the floor straight through the neighboring table, to the accompaniment of several shattering glasses and the stink of cheap rum.

That might have been enough, but Agreuth’s companions, though
officers and some of them older and more sober than he, showed no reluctance in flinging themselves at once into the fray thus begun. The men at the overturned table, sailors on an East India merchantman, were as quick to take offense at the disruption of their drinking; and a mingled crowd of sailors and laborers and soldiers, all better than three-quarters of the way drunk, and a great scarcity of women, as compared to what would have been found in nearly every other dockyard house of the world which Laurence knew, was a powder-keg ready for the slow-match in any case. The rum had not finished sinking between the paving-stones before men were rising from their chairs all around them.

Another officer of the New South Wales Corps threw himself on Laurence: a bigger man than Agreuth, sodden and heavy with liquor. Laurence twisted himself loose and heaved him down onto the floor, shoving him as well as could be managed under the table. Tharkay was already with a practical air seizing the bottle of rum by the neck, and when another man lunged—this one wholly unconnected with Agreuth, and by all appearances simply pleased to fight anyone at all—Tharkay clubbed him upon the temple swiftly.

Granby had been seized upon by three men at once: two of them, Agreuth’s fellows, for spite, and one who was trying his best only to get at the jeweled sword and belt around Granby’s waist. Laurence struck the pickpocket on the wrist, and seizing him by the scruff of the collar flung him stumbling across the courtyard; Granby exclaimed, then, and turning back Laurence found him ducking from a knife, dirty and rust-speckled, being stabbed at his eyes.