Read Too Many Men Online 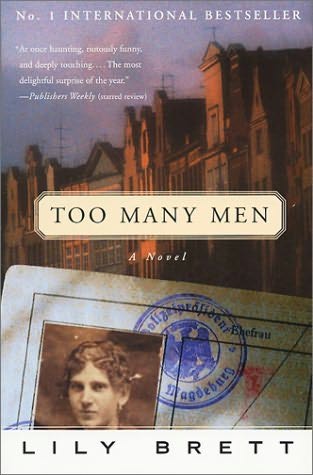 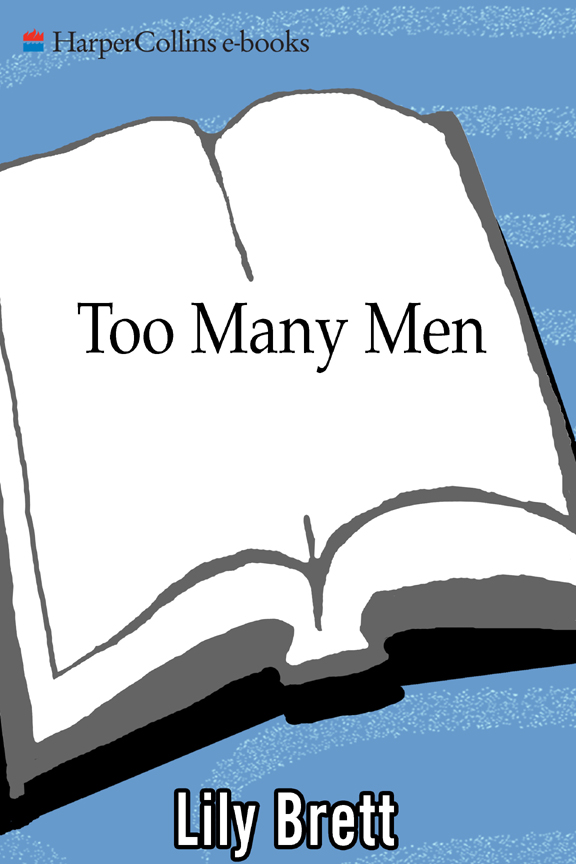 For David, my love,

with all my love

The last time Ruth Rothwax had been with a…

Edek Rothwax emerged from the customs and

At this time of the morning, there were always people…

Ruth almost didn’t see her father. He was sitting in…

It is funny, is it not, how many of our…

Ruth woke up singing. In a semiconscious state, halfawake,

Ruth was sitting in the lobby of the Grand Victoria…

Edek and Ruth were standing outside number 23

Ruth was awakened by a phone call from Max. It…

The sound of someone humming came ringing across the

Do you feel all right?” Ruth said to Edek. Edek…

Ruth woke up disoriented. She had dreamed about legs.

Ruth woke up. For a moment she thought that she…

Ruth felt a change in the plane’s atmosphere.

Ruth and Edek had been standing in the baggage collection…

Other Books by Lily Brett

T
he last time Ruth Rothwax had been with a group of Germans, she had wanted to poke their eyes out. The feeling had sprung out of her so suddenly and so unexpectedly that it had almost bowled her over. Where had this feeling come from? It had been a fully developed, ferocious wish—not some half-baked, halfhearted aggressive inclination.

There had been no buildup, no preparation. One minute she was deep in her own thoughts, the next minute she wanted to gouge an old woman’s eyeballs out. To stick her middle and index fingers right into those wrinkled sockets until the eyes dislodged themselves.

She had felt nauseated for hours after the incident. It had been in Poland, in Gdansk. She had been staying at the Hotel Marta. The Marta was meant to be a luxurious hotel. But something had gone wrong. The tall, bleak building was awkward and ungainly. It stood on its large block of land, alone and unrelated to anything around it. It was impossible to feel at home at the Marta. A wind howled through the vast lobby each time the front doors were opened. And nothing was where it could be expected to be. The concierge’s desk was hidden behind the women’s toilets and the elevators were at the back of the building, a five-minute walk from the front desk.

The hotel was near the center of the city. It felt as though it was in the middle of nowhere. Ruth’s room was on the seventeenth floor. There was

an international golf tournament on in Gdansk at the time. Every guest at the Marta seemed to be wearing a cap and carrying a set of golf clubs.

There was a uniformity in the ensembles, too. The women wore pale sweaters and pastel pants or skirts. The men were dressed in knit tops and plaid or patterned trousers.

The golfers had unnerved Ruth. She didn’t know much about golf, but she didn’t think Poland was high on the list of the world’s premier golfing locations. She had never heard anyone say they were going to Gdansk to play golf. If people knew of Gdansk at all, they knew of it as a port city, the home of Solidarity. Still, there were a lot of golf-playing Germans, Scots, and English at the Marta.

The German whose eyesight Ruth had wanted to eradicate got into the lift with her on her second night in Gdansk. There were four Germans.

Two men and two women, in their mid- to late seventies. It was late. After 11 P.M. Ruth was very tired. She moved over to make room for them. The two men were in tuxedos; the women wore evening dresses. They had obviously been celebrating.

One of the women laughed flirtatiously with one of the men. The laughter was the slightly off-key laughter of someone who had been drinking.

The man smiled. The woman laughed, again. A high-pitched trill of a laugh. And then it happened. With no warning. All Ruth had felt was a rush of blood to her head. Suddenly her face had been tight with tension.

She had turned toward the laughing woman. She had wanted to clamp the woman’s laugh right off. To shut it down permanently. “It’s not that funny,”

she wanted to say. She wanted to jab her fingers deep into the woman’s pale blue eyes and repeat, “It’s not that funny.” Ruth’s heart had started pounding. She had held her arms firmly by her side, at the back of the elevator.

She had pressed her hands into her hips in an effort to anchor them. She was terrified that they would take flight of their own accord. Act independently of the rest of her. She had thought her fingers might strike out and dig and prod until they had reached the woman’s brain.

The elevator was a particularly slow one. Ruth had thought it would never get to the seventeenth floor. Her hands burned and her skin itched.

“It’s not that funny,” she wanted to say. “It’s not that funny.” She had kept her mouth clenched shut. The woman kept laughing. Finally, the elevator stopped at the seventeenth floor. Ruth got out. She walked unsteadily to T O O M A N Y M E N

her room. She sat down on the king-size bed with its blue brocade bedspread and trembled.

That was a year ago. Ruth shuddered at the memory. She felt cold despite the fact that she had already been running for twenty minutes. She was in Poland again. In Warsaw. What was she doing in Poland? It was a good question. She hadn’t come on a whim. She had spent two years talking her father, eighty-one-year-old Edek Rothwax, into joining her on this trip. He was flying in from Melbourne tomorrow.

Ruth checked the pedometer around her waist. She was doing seven miles an hour. She pressed another button. She saw that already she had run almost three miles. The pedometer was strapped onto a belt that also held a drink flask and a cassette recorder. A small microphone was attached to her headphones. This allowed her to record lists of things to be done as she ran. They were breathless recordings, but Ruth was able to decipher them. Her credit cards and some zlotys were tucked into her socks.

In New York, where she lived, she looked like any other runner. Most runners had water bottles around their waists and Walkmans plugged into their ears. But not in Poland. In Poland, Ruth looked weird. Several people in the hotel lobby had stared at her as she left for her run this morning. The doorman, the porter, and a group of Germans. The Germans stared hard and looked perplexed. She had smiled at the Germans. This had unnerved them further. They had all looked away.

She loved the way her chest seemed to expand when she brought down a lap pull. And she relished the stretch in her pectoral muscles as she strained to bench-press.

Sometimes, in the gym, men stopped their own exercises to watch her squat. It always amused her. She did three sets of twelve repetitions. She wasn’t showing off. She was squatting for herself. For the sheer pleasure of feeling her back and legs as she lowered and raised herself with one hundred pounds on her shoulders. Lifting weights, her body felt alive. She could feel the individual components. Her feet and fingers felt strong. She

felt connected to herself in a primal way. At the end of a workout, she felt replenished.

Exercise, she thought, was a reasonable substitute for sex. It wasn’t perfect, but then neither, on the whole, was sex. Ruth thought that more and more women would soon be finding more fulfillment with their exercise equipment than their partners. New York City was full of women complaining about their men, or women complaining about their lack of men. Ruth fitted in well. She was forty-three, twice-divorced, single, and childless.

She had actually had three divorces, but the last marriage was a green-card marriage and she didn’t include it among her marriages or divorces.

Ruth had married her first husband at nineteen. She had been chubby and grateful that anyone had wanted to marry her. She hadn’t noticed that he lingered longer than was necessary when he said good-bye to certain of his friends. The marriage ended when she found him jammed inside a young man, in her bed. She had read about homosexuals in books. She hadn’t known that she had known any.

She married husband number two because she felt sorry for him. He couldn’t work out what to do with his life. He was thirty-two. She thought he was very clever and could really do anything he wanted to do. He was a good-looking man. Tall, blue-eyed, and blond-haired. She felt lucky to be married to him. Good-looking men were usually attracted to slim girls and women. She tried to keep the light switched off, in bed at night, and apologized incessantly for earning more money than he did.

That marriage fell apart when he accused her of hindering his search for a vocation. “You’re so efficient at what you do,” he said, “that it intimidates me. I feel crushed. I feel more unable to work out what I want to do, now, than I did when we got married.” He did work out that he wanted half of the small cottage she had bought in their second year of marriage. In the end, she had acquiesced. She sold the house and gave him half of the proceeds. She was surprised to find that she felt happier without him.

Two years after the divorce settlement he suggested that they reconcile.

ticularly with the tap of a foot. If tapping was effective, then every Jew in wartime Europe would have been tapping, day and night. Whole cities would have trembled with taps.