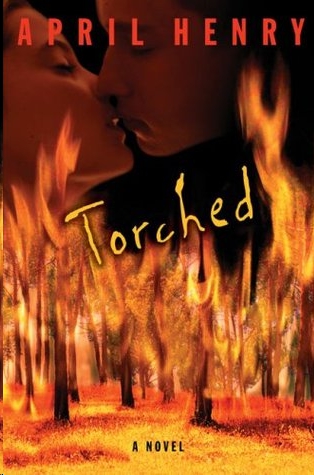 For Kenzie:
Thank you for sharing your name—
and the fun!
Also by April Henry
Shock Point

PROLOGUE
Hugging the sloshing milk jug to her chest with her slick vinyl gloves, Sky hurried after Meadow and Coyote. The stench of gasoline and diesel made her sick to her stomach. She was shaking, and not just from the chill of the April night.
“Now!” Coyote whispered. The three of them dashed across the street toward the car dealership. They all ran a little awkwardly, thanks to the too-large thrift-store shoes they wore, the toes stuffed with newspaper so no one could trace them by their footprints. When a pebble clattered into the darkness ahead of them, Sky flinched, even though the security guard had just driven off and wouldn’t be back for a long time.
Earlier in the week, Coyote and Sky had spent three nights in a parked car monitoring the security situation. It turned out to be pretty minimal. Every two hours the same guy wove his white and green private security car through the empty streets and then drove away. This part of town was dead quiet at night, a sea of car dealerships and long, windowless industrial buildings. Aside from the security guard’s car, there was no real traffic.
Now Coyote nudged her. He grinned and jerked his chin at the banner over their heads.
HOT DEALS ON NEW HUMMERS!
The three teens set down their jugs at the edge of the car dealership lot and checked their watches. Sky’s said 3:27. She had been awake for nearly twenty-four hours, but she had never felt less tired in her life.
Coyote held up one hand, fingers spread wide. He bunched them together and flicked them out three times. They had fifteen minutes.
They picked up their jugs and scattered to different parts of the lot. The dealership was a place of light and shadows. Along the edges that bordered the road, where a passing driver might stare longingly at a new SUV, it was brightly lit. But between the rows were deep gullies of black, and Sky ran down one of them now.
When she was in the middle of the row, she put down her jug and pulled a can of spray paint from the pocket of her hoodie. To her left, Meadow’s giggle mingled with the hissing of the paint can. Sky shook her own can, then aimed the nozzle at the side of a black Hummer. She made a white wavy line along the side, wincing a little when it strayed up onto a window, feeling like a kindergartner trying not to color outside the lines.
On the hood, Sky painted
I

POLLUTION,
then sprayed another wiggly line on the driver’s side of the car. She pressed the button to light up her watch. 3:30. Three minutes gone. She worked faster now, running from car to car. On the front of one she wrote
KILLER!
On another she wrote
FAT LAZY AMERICANS!
Other Hummers received stars and hearts and more wavy lines. On the car at the end of the row, she wrote,
THE MEDICS ARE HEALING THE EARTH,
although she ran out of space and had to write the word
Earth
kind of small.
She checked her watch again. 3:41. Almost time to light the fuse.
Sky dropped the nearly empty can of spray paint. She had never littered before, but like Coyote said, you didn’t want to get caught with a can of spray paint the same color as the one used at an action.
In the darkness, it took her several long seconds to find her jug of gasoline and diesel. Sky knelt down, the gravel poking her knees through her jeans, and felt for the homemade fuse held in place by a sponge. Crawling under one of the monstrous vehicles, she pushed the milk jug ahead of her until it sat squarely under the engine. After creeping out, she stood and shuffled backward, carefully unrolling the fuse until she was twenty feet away.
3:42. It was time.
But before Sky could move, her watch changed to 3:43.
She was late.
As she pulled the lighter from her pocket, she couldn’t believe she was really doing this. Crouched down next to a huge black tire, she flicked the lighter’s wheel. It didn’t catch. She tried again. Nothing.
“Hurry!” someone hissed from behind her. She couldn’t tell if it was Coyote or Meadow.
Desperate, she yanked off her glove and spun the lighter’s wheel hard. The tiny serrations bit into her thumb.
Finally, a small flame appeared, flickered, threatening to go out. Hands shaking, Sky cupped the lighter, managing to keep the flame alive long enough to touch it to the end of the fuse. A tiny orange-blue light appeared. It began to race along the string. She stripped off the other glove and dropped it as she scrambled to her feet.
She turned and ran. At one point she tripped over her too-big shoes and scraped one knee, but in less than a second she was back on her feet. Her ears strained for the first sound. When it came, it was so loud that it was more of a physical sensation than noise.
Whoomp!
Thick air pushed past her, slapping her left ear. And then another explosion, even louder, this time on her right. Sky ran harder, her breath coming in gulps. She had to get out of the lot before the whole thing was a fireball.
Behind her she heard smaller explosions as gas tanks added their own fuel to the fire. She burst across the street to where Coyote and Meadow gestured frantically. Coyote had just pulled her behind the shelter of a Dumpster when the third explosion came.
She peered around the corner at the dealership.

Spin Devil by Red Garnier
A Garden of Trees by Nicholas Mosley
Broken and Screwed 2 (The BS Series) by Tijan
An Unlikely Witch by Debora Geary
Cat Mummy by Wilson, Jacqueline
Carnage City: A World at War Novel (World at War Online Book 6) by Mitchell T. Jacobs
Grim Crush (Grimly Ever After) by S.L. Bynum
Nursing on the Ranch by Kailyn Cardillo
Soldier of Finance by Jeff Rose
Between Now & Never by Laura Johnston