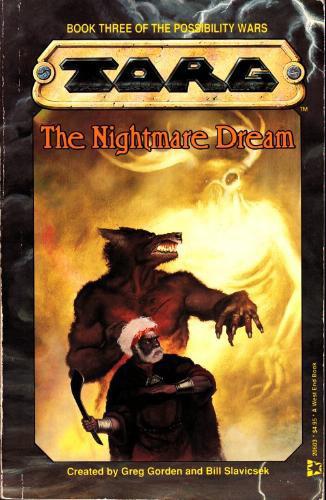 They have come from other cosms, other realities, raiders joined together to

accomplish one goal — to steal the awesome energy of Earth's possibilities!

This spectacular epic of adventure, magic, and high-technology is set on a reality-torn Earth — an Earth warped into
someplace else.
Don't miss any of the volumes in the Possibility Wars saga!

by Bill Slavicsek and C.J. Tramontana

Damn all stormers to the depths of darkness anyway! And especially damn the fact that they exist in droves on the very worlds best for plundering! — The Gaunt Man

Thratchen sat upon the Gaunt Man's throne of bones, high in the tower atop Illmound Keep. He lazily twirled the High Lord's walking stick between his clawed hands, watching the carved Carredon head dance as the stick turned. So much had been accomplished so far, he thought. He could feel the power he craved just beyond his grasp. But there was still so much to do before he could reach it.

There was a knock at the door, and Thratchen sat up straight. It was time to interview the Gaunt Man's lieutenants. No, he corrected, now they were his lieutenants.

The door to the tower room swung open, and five people entered. Thratchen looked at each in turn, remembering their names and positions in the Gaunt Man's court.

The first was the vampyre, Mantooth. To the general public of Orrorsh, he was Baron Victor Manwaring, but his true name was respected by all of the people of the night who inhabited the dark cosm. His extremely pale complexion was offset by a tuft of jet-black hair. Long, immaculate fingernails clicked together as his hands opened and closed. He was a trusted servant of the Gaunt Man, but never one of his inner circle. Until now, even if it was only part of Thratchen's deception.

Next entered Parok, the ravagon warlord. The huge demon who long ago pledged his race to the Gaunt Man's service had only recently returned to Orrorsh after handling missions abroad for the High Lord. He was going to be the toughest one to convince, Thratchen thought. But he would be his strongest ally.

The third was General Avery Wellington, commanding officer of the Victorian forces in Sumatra.

He had sold out his people for Hie power the Gaunt Man promised. For a human who had seen things few of his race even imagined, he held up surprisingly well. His sanity was mostly still intact.

The fourth to enter was Lord Stanton Cheltenham, a relative newcomer to the halls of Orrorshan power, although he bore a remarkable resemblance to his ancestor who served the Gaunt Man over one hundred years ago. There was something about the man that disturbed Thratchen. He knew he wasn't exactly human, but he could not penetrate Cheltenham's disguises to glean more information.

The last to enter was Sabathine, the ancient vampyre matriarch. She did not look old. Instead, she wrapped herself in a young, beautiful female form - all dark, wavy hair and voluptuous curves - that many men had fallen prey to over the centuries. She was not strictly a member of the Gaunt Man's court, caring little for the games of power he liked to play. But she was powerful and influential in her own right, and having her assistance for even a brief time would greatly aid Thratchen's cause.

He motioned for the assembled group to make itself comfortable, but Parok waved him-off.

"You'd best have a good reason for sitting in that chair, Thratchen," the ravagon warlord roared. "Why have you called us together?"

"Yes," Mantooth added. "And where is the Gaunt Man?"

Thratchen remained calm. He showed no signs of anger or nervousness. He simply raised the High Lord's cane for all to see. "I sit here at the Gaunt Man's request," he replied evenly. "He has given me his walking stick as proof of my station."

"But where is he?" General Wellington asked excitedly. "How could he leave while we are still at this critical juncture?"

"The Gaunt Man's actions are not for any of us to question," Thratchen said, letting impatience spill into his tone. "He has frequently disappeared in the past, leaving others to run things. If you have a problem with his choice of regent, I will be glad to lodge your complaint when he returns."

"We have no problem, Thratchen," Sabathine answered, letting her hypnotic voice lull the group with its lilting rhythm. "We just find his absence strange. Why have you called us?"

Thratchen twirled the cane, directing the sparkling light from the stone in the Carredon's mouth toward his visitors. "Because the Gaunt Man's sudden departure
is
strange, and because I need help to keep the invasion moving smoothly. This is a test, I believe, as the Gaunt Man is wont to do. We are all being tested here, and how we conduct ourselves will determine how the portions of power are finally handed out."

"The High Lord has disappeared before, that is true," Sabathine offered. "Again, what has this to do with us?"

Thratchen stood, facing the ancient vampyre. "You must help me convince the other High Lords that it is business as usual here in Orrorsh. If they detect the slightest weakness, then the fragile alliance is lost. Without the alliance, this planet will destroy us all."

Parok grumbled, flapping his black wings angrily. "What you say makes sense, but I still have concerns."

"Assist me, and when the Gaunt Man rewards my service I shall see that each of you receives a share of the power," Thratchen promised. "We shall be the nucleus of his new inner circle of advisers. And when the other

"For now, Thratchen, we shall a id you," Parok pledged cautiously. "But only to ensure the Gaunt Man's interests."

Satisfied that they would aid him for the time being, Thratchen explained what he wanted each of them to do. Then he sent them on their way. The ancient vampyre waited until the others were gone, then she turned to face Thratchen.

"You play an interesting and dangerous game, son of Tharkold," Sabathine said. The hypnotic quality was gone from her voice. Now it was simply cold, even, dangerous. "Do not give me cause to believe you have played us for fools."

Sabathine let her own fangs peak from behind her blood-red lips. "As long as we understand each other. I have always liked you, son of Tharkold, from the first day your master introduced you to the Gaunt Man all those centuries ago. Why you followed him I never understood."

"He was the ruler of my people," Thratchen said. "When he pledged our race to the Gaunt Man's service, I followed willingly. And when he received his own Darkness Device, I followed him to his own reality." Thratchen flexed mechanical claws absently, unfolded metallic wings. "There were... certain advantages to be had."

"As you say." With that the vampyre turned, gathering the shadows about her, and disappeared

through the door. It closed in her wake.

Of course it was a dangerous game he was playing, Thratchen thought. The most rewarding games usually were Look at the game that the Gaunt Man started. It was nothing less than a quest to become the Torg, the immortal High Lord of legend. To do that, he had gathered six other High Lords into a loose alliance for the purpose of taking the possibility energy of a I >reviously-undiscovered world called Earth. This planet .md its cosm had the most energy they had ever found concentrated in one reality. It had the power to elevate him to Torg. All he had to do was convince other High I .ords to help him absorb the massive surges this reality would produce, surges that could destroy any of them who tried to take this world alone — including the Gaunt Man.

They had agreed to the plan, six of the most powerful beings in the cosmverse, and most of them had actually made it to Earth.

Baruk Kaah, High Lord of the primitive reality of Takta Ker had invaded North America and established a realm where Earth's technology would not function.

The Antipope of Magna Verita, Jean Malraux I, had brought a medieval theocracy to France.

In Africa and the Middle East, the Egyptian Empire had been resurrected by Dr. Mobius, High Lord of a pulp reality.

Even the mysterious Kanawa had arrived on Earth, overlaying his reality of high technology over the area called Japan.

Only one of the High Lords that promised to join the alliance failed to reach this cosm, but that was not because he did not try. Thratchen's one-time master, High Lord of Tharkold, was discovered by the Soviet Union and stopped before he could bring his reality to bear. That mistake almost cost the Gaunt Man this world. And it was all because of stormers. The cosm had an annoying habit of creating large numbers of the reality retainers, and they in turn had a habit of working together.

But Thratchen could not entirely hate stormers. They had taught him so much since this whole cycle of war had begun. He thought about the lessons as he passed through a secret door that led to a descending spiral staircase. He started down, remembering how his study of one particular group of stormers had directed him to his new position. With luck, further study would provide him with the power he craved — and the answers to the questions that gnawed at his soul.

At the bottom of the stairs stretched the long corridor that led to the Gaunt Man's secret laboratory. Thratchen crossed the stone floor quickly, passing into the dark chamber without hesitation. The huge'room extended in all directions. Against the nearest wall rested the Gaunt Man's ornate mirror, now covered with spider web cracks. Far across the room was the remains of the possibility sorting machine. And between the two, in the middle of the chamber, was a swirling maelstrom that spun around the blue-red stone called the Heart of Coyote.

Thratchen, maintaining what he hoped was adequate distance between himself and the storm, thought about the stormers who had brought this to be.

Tolwyn of House Tancred, a paladin from Aysle who died five hundred years ago in battle with Uthorion -the very battle in which Uthorion had taken over the magical reality - but had somehow returned to life to aid this planet.

Dr Hachi Mara-Two, the young genius from Kadandra who Thratchen had been sent to kill. Instead, he had followed her to this world and watched as she gathered other stormers. She had discovered how to use the collected powers of stormers to accomplish amazing feats, and he was learning through her how to use that same knowledge to his own ends.

Flick by Tarttelin,Abigail
Desired and Dominated by Eva Simone
Baited Blood by Sue Ann Jaffarian
Memories from a Different Future: Jump When Ready, Book 2 by David Pandolfe
Losing Faith (Surfers Way) by Jennifer Ryder
The Drowning Spool (A Needlecraft Mystery) by Ferris, Monica
橘生淮南·暗恋 by 八月长安
The time traveler's wife by Audrey Niffenegger
Chet & Floyd vs. The Apocalypse: Volume 1 by Hunter, Justin
Afterlives of the Rich and Famous by Sylvia Browne