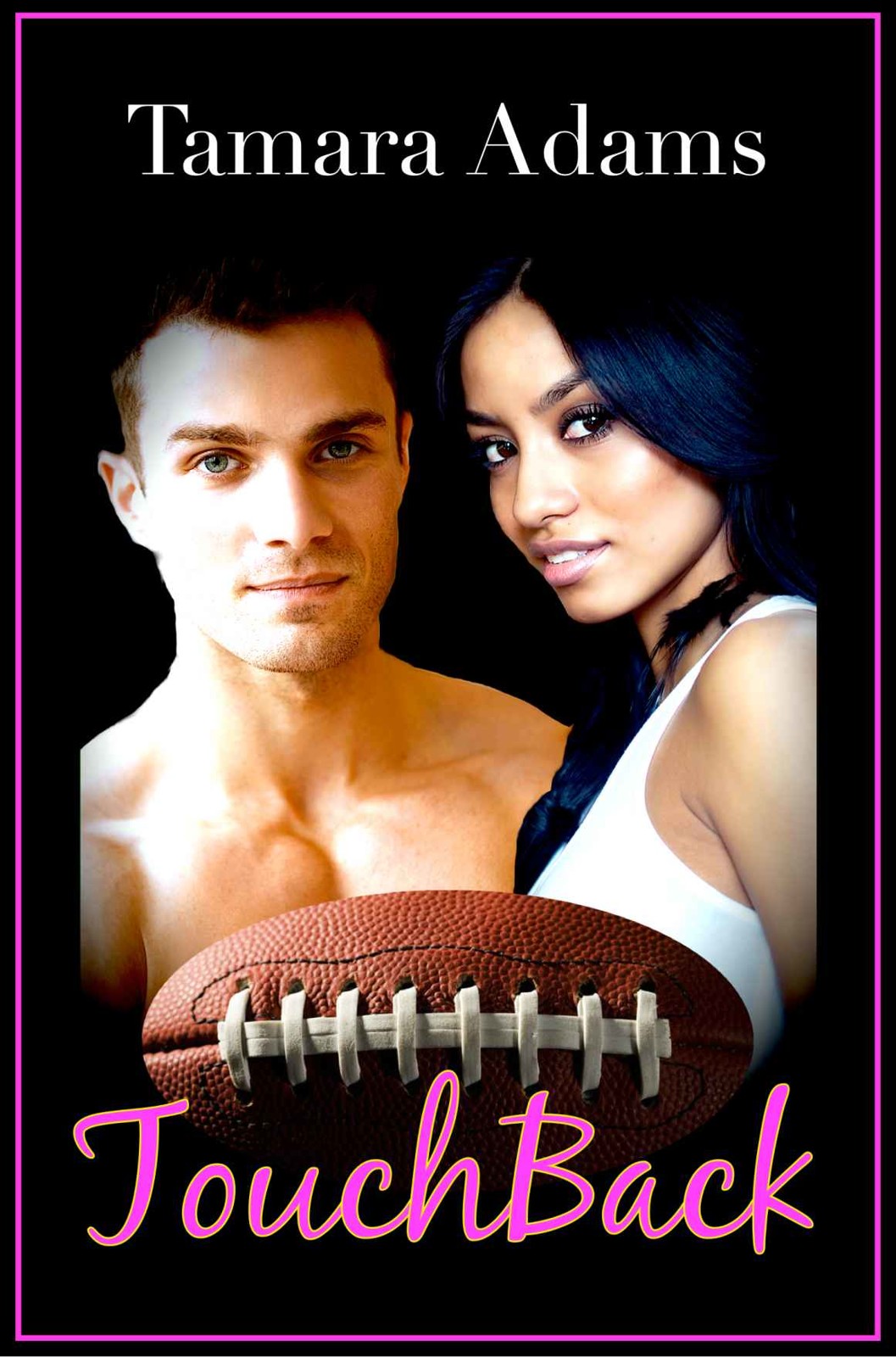 A note to my readers

I am thrilled to introduce my newest title
TouchBack
. It was a trusted family friend who gave me the courage to write my first book not so long ago. With each book I feel more confident and able to tell a story that will uplift and entertain.

In this story we have a young reporter who is breaking new ground in her field and a seasoned sports celebrity who are thrown into each others laps, and eventually, each others arms.

Thank you Rodney, for telling me to put my imagination to good use. And thank you to all you readers for keeping on me until I got the message!

I hope you enjoy
TouchBack
and continue to tell me the kind of stories you wish to hear!

All rights reserved. This book or any portion thereof

without the express written permission of the publisher

Stockard finished a set of chest presses and sat up on the weight bench. He was only half way through  his daily workout but he was already feeling restless. He'd done these exercises a thousand times. He was in peak physical condition. At the height of his career. And he was welcomed with open arms by the movie stars, rock stars and politicians of the world.

Then why the heck was he so bored?

He swigged some water and ran a fresh towel over his neck.

Stockard remembered growing up on his parent's farm. There was so much to do on one hand and nothing to do at all on the other. Especially for a teenage boy who only wanted to chase girls. But he'd never been bored.

Not for a second.

But now? Boredom was the story of his life. The only time he felt the haze of disinterest lift was at game time. Then he was firing on all cylinders. But the rest of the time, he felt… well, bored.

He stared at the white washed gym that was reserved for player training. Where had all the color gone? He lived in an expensive condo not too far from the stadium. It was tastefully decorated in neutral tones by the decorator he'd hired.

Barbara something or other.

He was pretty sure he'd slept with her but he couldn't quite remember. That's how bad things were getting. He didn't date during the season. Sex was a distraction. But lately he couldn't recall the last time he dated off season either.

The thought of taking some woman out to dinner just to take her to bed was something that didn't interest him in the least. It's not that he didn't like women. It's just that they made it too easy for him. He knew that with his big green eyes and hard body he was attractive to the opposite sex to begin with. Money and fame had only made things worse.

He sighed and leaned back again. Five sets to go. Maybe he'd call it a day early. Go home and relax.

The thought did nothing to lift his spirits however.

Veronica parked outside the stadium and stared up at the structure. She pulled down the visor and checked her makeup. It's not that she cared what she looked like. She was just killing time while she gathered her nerve.

After all, it was only the most important day of her life.

She'd sailed through college and a grad degree with flying colors. Top of her class at a top Ivy League school. But once it came to get a job in the real world, things got much more difficult. She'd watched in awe as her less qualified classmates got prestigious assignments one by one.

That's when she started to panic. Things were tougher for women in general, and even more so for a minority woman. It was shameful, but true. She was going to have to work twice as hard as anybody else.

Her life depended on it.

She had tremendous student debt, despite having won numerous scholarships over the years. Never mind that she didn't have a rich mommy and daddy to fall back on like most of her classmates. And now she was in New York City, living in the world's tiniest apartment with two other girls from grad school.

They'd
easily gotten jobs, or at least, internships. So when the second rent bill had come around, taking almost every penny she had left, Veronica had lowered her standards and started applying for every single job even relatively close to her field.

That's how she had ended up at the
NYC Post News
. It was the biggest, the loudest, the most ridiculously sensational paper in the city. The pay was awful and it didn't do much for her career ambitions, but it was a job. When they'd made the offer, her aspirations had sank like a stone.

But she'd taken it.

The past year had been spent on research and fact checking. Basic grunt work for a newbie. She'd been prepared to do that of course, she'd just been hoping to do it at the
New York Times
.

Today was different though. Today, she had a chance to finally earn her stripes. Not that it was a choice assignment. It wasn’t.

But it was
hers.

This was her first solo assignment. There was no way she was going to mess this up. She even had a chance to get out of the downward career trajectory. But only if she could blow the lid off of the lackadaisical attitude most athletes had toward steroid use.

Too bad she wanted to throw up all over her one pair of expensive, heavily repaired black leather heels.

She climbed out of the car and straightened her fitted black blazer. She'd worn a skirt suit. She knew she looked good in it. Besides, she needed to look serious to get the players to respect her.

She flashed her Press Badge to the security guard and made her way inside.

He wasn't sure what it was exactly that set him off. The intelligence he heard. The persistence. The rich and smoky tone. But there it was.

He had a hard on for the first time in ages.

The locker room was not a great place to get a boner.

He frowned and wrapped another towel around his waist. He would just get dressed and see who the hell that voice belonged to. No harm, no foul.

Especially since he was the only one in the showers at the moment.

The player's gym locker room was divided by rows of lockers. It was separate from his game locker. He started dressing, trying to ignore the soft, melodious voice that was coming from nearby.

It was funny how much you could tell from someone's voice. The woman speaking just out of sight sounded utterly feminine, but with a core of solid steel. He grimaced and tucked his erection firmly into his pants.

Hell, maybe he did need to get laid.

That's when he saw her. Or rather, she saw him.

He had his answer. The voice belonged to one of the most beautiful woman he'd ever laid eyes on. Petite and fit but curvy, her rich brown skin looked like silk.

Her hair was long and straight, her eyes seductively titled ovals, her lips pouty and her face, perfection. That didn't even start to cover it.

He hadn't even started to check out her body.

Long slender legs, generous hips and a tiny waist all led up to two glorious globes. To say that she was the feminine ideal was an understatement. She must be a bikini model. He grinned at her foolishly.

It was time to break his streak.

Maybe even more than once.

The woman held out her hand and smiled at him cooly.

"Mr. Manning, my name is Veronica Franklin. I'm here to interview some team members. Do you have a moment?"

Damn it. A reporter. He knew as well as anyone that reporters could make or make an athletes career. He always treaded carefully with them and said as little as possible.

So much for getting laid.

"I'm investigating the widespread use of steroids in professional sports. Can we sit and talk for a bit?"

He scowled at her. That was not a topic anyone wanted to be quoted on. And to be honest, it pissed him off.

He pulled his shirt on and turned his back on her.

It was really too bad though.

Veronica stared in frustration at his broad, muscular back. Stockard Manning was the star quarterback. If he wouldn't talk to her, it was unlikely any of the other players would.

She squared her shoulders.

So she'd
make
him talk to her.

"Is it true that it's an open secret that many top athletes use performance inhancing drugs?"

He glanced over his shoulder at her as he pulled his shirt on. Too bad.

Stockard had a really nice back.

Where had that come from? She was here to work, not ogle the players! Even if they did have beautiful dark green eyes. Or handsome faces. And absolutely phenomenal bodies…

Another player walked into the locker room half naked. She grimaced and turned away. Well, not
all
of them had good bodies apparently.

Probably a line backer. They were paid to keep themselves hefty. That didn't mean they weren't a part of the scandal. She racked her brain trying to remember his name. She'd been studying the team and the key players all week.

"Mr. Davis, I was wondering if I could take a moment of your time."

The man turned to her, the annoyance in his face rapidly replaced by an eager, lusty grin.

"Well hello sweetheart. You can have more than that."

She heaved a sigh of relief. If Stockard wasn't going to speak to her, then maybe some of the other players would.

She held out her recorder and watched as Randall's face changed from lust to disgust.

"Forget it sweetheart. Take a hike. Unless you want to yank my chain."

Her jaw dropped as he pulled away his towel, making sure she got a good look at his 'chain'. She turned away quickly, not ready to give up.

"Mr. Davis, would you care to comment on the widespread use of steroids in the league? How common is it?"

He grunted behind her but said nothing.

"Mr. Davis, have you ever been tempted to use performance enhancing drugs."

She felt him move up behind her until his gut bumped into her back.

She exhaled, staring at the ground.

"You have? Which kind exactly and under what circumstances?"

"Viagra. And if you come home with me, I'll show you which circumstances."

His hand came down on her shoulder. Veronica froze. This was sexual harassment of the worst kind. He must know that she'd never say a thing.

Not if she wanted to continue working.

Snap out of it!

"That's fascinating Mr. Davis but no thank you. If you feel like speaking to me as an adult, I'll leave my card with the coach."

Tears were welling in her eyes but he didn't have to see them. She shut her tape recorder and slipped it into her bag.

When she looked up, Stockard Manning was staring at her.