Trail of the Twisted Cros 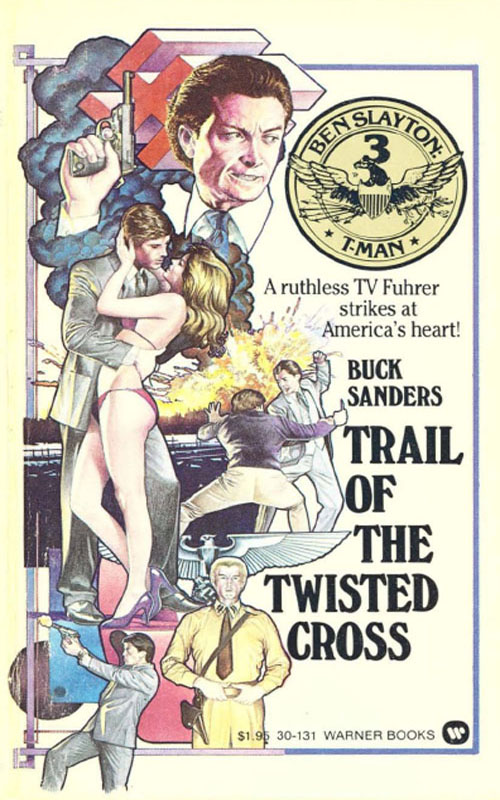 Then came the explosion.

A small, muffled explosion followed by a powerful rumbling from somewhere deep in the bowels of the Lovebridge mine.

Another explosion, far more powerful. Then another.

The men trapped in the elevator were mad with fright. The young LaRaja thought fleetingly of his pregnant wife.

The fire came next. Roaring out of some side shaft, rising insanely up the main shaft toward the elevator, flames seemingly
angered by the temporary impasse of twenty-two shrieking men on a wooden elevator platform….

T-MAN #1: A CLEAR AND PRESENT DANGER

T-MAN #3: TRAIL OF THE TWISTED CROSS

Part One
Chapter One

Waves of the idle curious, the variously outraged, and the merely hustling had been gathered since noon in the huge, dusty
parking lot outside the main gate of the penitentiary. The temperature was in the mid-nineties, the humidity level was something
over eighty percent, and the chance of riot was as high as the early September sun.

Ringing the lot was a brigade of beefy U.S. marshals and a back-up contingent of Connecticut state troopers. To a man, they
worried that they might not be able to keep peace, once the sweltering crowd caught sight of the man they had come to either
hail or curse—Johnny Lee Rogers.

Dark-skinned Cuban roughnecks—refugees brought up by the truckload from the slums of Manhattan and Union City, New Jersey—milled
about one end of the parking lot, glowering at Anglos. When the television cameras approached, they stripped to the waist
and chanted something in berserk Spanish.

At the opposite end of the lot, a swarm of hot-eyed adolescents togged out in khakis, swastika armbands, crash helmets, and
construction boots, hawked the latest issue of
White Power
. It was an extra, featuring a half-page photograph of the jut-jawed and Hollywood-handsome Johnny Lee Rogers manacled to
a pair of Federal marshals, and a headline screamer which declared, “Spic Lies Sends Our Commander to Prison!”

In between these warring groups, freelance true-believers of every hue inveighed a smorgasbord of bizarre causes: “Freedom
for Rudolph Hess!”… “Civil Rights for Lesbians and Gays!”… “Don’t Be Half a Man, Join the Klan!”… “Brits Out of Ireland Now!”…
“Abortion is Murder!”… “Lyndon LaRouche in ’84!”… “Impeach Ronald Reagan!”… “Hitler Was Right!”… “Is Al Haig Darth Vader?”

A tiny band of
kvetches
from the Jewish Defense League attempted a sit-in by squatting cross-legged in the center of the lot and keening in Hebrew.
They were generally ignored, which was lucky for them.

All of it was picture-perfect for television, a swirling bazaar of throaty
machismo
and anarchy, good for at least a ninety-second videotape clip on the evening news. Everybody in TV Land, from the beer-can
set on up to the White House court, had been enthralled for weeks with the nightly news of Johnny Lee Rogers’ trial. Everywhere,
editors appreciated the excitement (read racial conflict) that a Rogers appearance guaranteed. He was the hottest thing in
the media since the crazy days of the sixties.

Johnny Lee Rogers was especially good for television. He was striking in appearance and very forceful, the self-styled
Führer
of the re-emergent American Nazi movement, possessed of a soft Southern molasses voice that carried a sly combination of
virulent racism and respectability. Television knew he was an oddity, of course, a flash-in-the-pan huckster of the hard Right;
television didn’t take him seriously. But Johnny Lee Rogers took television very seriously indeed. He had seen time and again
how the likes of him could use the airwaves to weld fears and resentments born of hard times into a powerful following, even
if the contemporary keepers of the airwaves could not.

A solitary Danbury city cop, busy with a pad and pencil recording license-plate numbers for the department’s skimpy intelligence
files, spotted his next-door neighbor in the crowd, a crew-cut prison guard who had shown up on his day off to take in the
spectacle.

“Didn’t expect to see you here with all these freakin hairbags, Lester,” the cop said, startling his neighbor. “You a closet
Nazi, or do you cotton to those spies over there?”

Lester grinned, surprised and gratified to see someone who appeared normal to his frame of reference. He scratched his head
with the toothpick that had reposed in the corner of his mouth since the last bite of a gristly ham sandwich. The toothpick
broke in half, and Lester dropped it.

“Shit! You think that freakin little Nazi amounts to a diddley-turd? He’s nothin but some little redneck slimeball who learned
to talk straight and walk on all fours. And hell, he’s prob’ly queer like all the rest of them Third Reich queens. Prob’ly
so queer he squats to piss.”

Bob chortled at his own joke as he scratched two more license plate numbers onto his crowded pad.

“Yeah, well, there’s maybe somethin in what you say, Bob. I give you that, but you ever heard this guy talk? I mean, you ever
really listen to what the guy has to say?”

“Well, there’s somethin to it, I’ll tell you that. I mean, lookit all around us. Men out of work we known all our lives, Bob.
And who gets the only jobs open? These fuckin gooks and spies, that’s who, and you know it. The Jewboys own everything, and
so they got no worries when it comes to the old paycheck, and their relatives ain’t worried none, either. The niggers are
even smarter. They just collect their goddam welfare checks, and they don’t even work for it. Least the Jewboys work—”

“It takes listenin to Johnny Lee Rogers to know that, does it, Lester?”

“Well no, not exactly… I guess it takes somebody like him to make it all right to say what we all know, that’s all.”

“What? Some blow-hole in a Hitler suit?”

“Just listen to him, Bob. They’re prob’ly going to let him speak here, what with Dan Rather himself and Geraldo Rivera and
Sam Donaldson and all them other network dudes all crawlin all over the place.”

“Yeah?” Bob looked up from his pad. “Where’s Dan Rather?”

Lester began pointing toward a scaffolding tower hastily erected by the CBS Television crew, but Bob’s attention, like that
of everyone else in the parking lot, was distracted by the blare of a sound truck rolling toward the police line.

White, black, and brown faces were riveted on the sound truck.

Three men in Nazi uniforms rode on the roof of the slow-moving truck, arms folded imperiously across their chests.

Newspaper photographers made a beeline for the truck. Shutters clicked wildly, capturing the image of the three defiant Nazis
poised over a roiling, emotionally charged mob of hate-filled friends and foes.

The truck came to a stop, issued a final “Attention white men!”, and those who spoke English silenced. The Cubans began their
chanting again, but failed to attract further camera attention, and eventually fell quiet. The Federal marshals and state
troopers began sweating profusely.

Atop the sound truck, which the photographers were duly noting contained helmeted brown-shirts inside, and which was decorated
with huge swastikas on the side panels, the largest of the three men stepped forward and raised an electric bullhorn to address
the crowd.

“White men!” he screamed, in a voice tinged with a Bavarian accent of some other time. “We gather here today to witness a
great injustice—”

The crowd below him, thickly swelled by madly cheering young storm troopers, sent up a great roar of agreement. The television
cameras caught it, unaware of the manipulation at play. Television coverage of news events had become so much a part of the
news itself that no one on either side of the camera recognized cues anymore. When Lee Harvey Oswald was marched through the
phalanx of television lights and cameras after his arrest, Jack Ruby had only to enter from stage right and it was a wrap;
when John W. Hinckley Jr. squeezed off six shots from his .22-caliber pistol, he obligingly allowed the smoking barrel to
linger in his outstretched hand for the benefit of a neat photographic segue to the Secret Service agent catching the last
pellet in his gut instead of President Reagan.

“—we gather here before the newspapers and the television cameras and the radio microphones so that the whole world will know
of our solidarity!”

Again, the speaker with the German accent had to pause for the yawping Nazi minions below. Those who chose instead to hoot
and shake their fists were drowned out by the superior number of Nazi lungs. Photographers took the pause as an opportunity
to engage in a bit of position combat, the better to record the ravings of the sound-truck speaker.

“I am Karl-Heinz Hoffman!” the man on the truck shouted. “I am leader of West Germany’s Sporting Group of Defense… I stand
before you today, here in America, to show my solidarity in the cause of Johnny Lee Rogers!”

Lester moved close to Bob’s ear and answered: “Runs a paramilitary outfit in Munich… calls it a sportsmen’s group, ‘cause
Nazi outfits are outlawed over there, you know. Saw the guy once in the newspaper, walkin his pet puma on a lead, believe
it or not.”

Hoffman raised his hands, his mouth drawn tight and wolflike, then lowered them. It was a gesture commanding his followers
to hush, which they did.

“I want now to introduce two other great leaders of the white Christian world,” he said through the bullhorn. His companions,
like him dressed in all their fascist finery, stepped forward to flank Hoffman.

The trained crowd cheered again, lustily, as Hoffman raised high the mailed hand of Erikson, leader of a growing cult of black-shirted
Flemish thugs who held increasingly violent demonstrations against immigrants in Antwerp and other large Belgian cities.

Hoffman then held aloft the hand of the other man, an older Nazi, more obviously of Adolf’s generation than his compatriots
on this day. The older Nazi wore a gleaming black mustache, cut in a Hitleresque little brush, and he carried a braided leather
whip of the sort issued to officers of the
Schutzstaffel
.

“Frederico Eschenroeder,
mein
friends!” Hoffman shouted. “From Brazil, and the Friends of April 20!”

The mob erupted into chants now of “Heil, Hitler!” at the mention of the German
Führer’s
birth date. A newspaper photographer who had managed to scale the side of the sound truck was struck down by Eschenroeder’s
whip. Two bloody lines were left on the hapless shutter-bug’s neck as he fell to the ground. Eschenroeder screamed at him,
“Swine… filthy bastard!” his face frozen in uncontrolled contempt.

The men of the Jewish Defense League had seen the lashing whip, and now they made their way through the tightly packed crowd,
shouting, “Never again! Never again! Never again!” as they marched resolutely toward the Nazi sound truck. At least one of
the television cameramen heard their advance over the cacophony of lurid tributes to Adolf Hitler, and he aimed his lens at
the Jews.

With lightning precision, a flying wedge of teenage brown-shirts descended upon the fiery-eyed Jews, overpowered them, and
pummelled them to the ground, effectively blocking out any chance of a camera record by grouping around their prey and shielding
from view the damage they would do, so quickly and so quietly.

How to Be an Antiracist by Ibram X. Kendi
The Assassin's Trail by J.C. Fields
The Baby by Lisa Drakeford
The Bride of the Immortal by Auriane Bell
Chloe and Cracker by Kelly McKain
Strike (Completion Series) by Roberts, Holly S.
The Italian Wife by Kate Furnivall
The Duke's Guide to Correct Behavior by Megan Frampton
Dirge for a Necromancer by Ash Stinson
The Ultimate No-Bake Dessert Cookbook: Over 600 Simple and Delicious No-Bake Recipes by Coburn, Corbett