Clint checked the bodies to make sure they were dead. Then he checked the man he had hitâKemperâand was surprised to find two bullets in his chest. He wondered about that until he realized from the position the body was in, given where Bridget had been lying on the floor when she was shooting, it had to be she who had shot and killed him.

He wasn't sure whether he was going to tell her that or not.

The bartender came over to him and said, “These fellers were sayin' you probably killed the Lane brothers. Is that true?”

“Well then, friend,” the barman said, “you just did Council Bluffs a service.”

THE GUNSMITH by J. R. Roberts

Clint Adams was a legend among lawmen, outlaws, and ladies. They called himÂ .Â .Â . the Gunsmith.

BUSHWHACKERS by B. J. Lanagan

An action-packed series by the creators of Longarm! The rousing adventures of the most brutal gang of cutthroats ever assembledâQuantrill's Raiders.

Dex Yancey is Diamondback, a Southern gentleman turned con man when his brother cheats him out of the family fortune. Ladies love him. Gamblers hate him. But nobody pulls one over on DexÂ .Â .Â .

The blazing adventures of mountain man Will Barlowâfrom the creators of Longarm!

J.T. Law: the most relentlessâand dangerousâmanhunter in all Texas. Where sheriffs and posses fail, he's the best man to bring in the most vicious outlawsâfor a price. 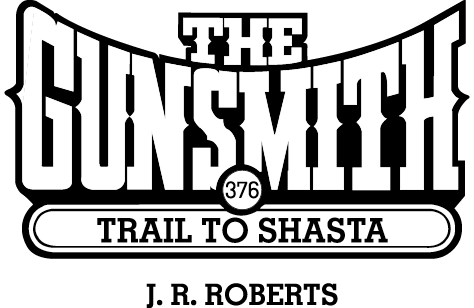 Jove Books are published by The Berkley Publishing Group.

The “J” design is a trademark of Penguin Group (USA) Inc.

In 1853, a local Shasta County newspaper reported there wasn't a river, creek, gulch, or ravine in Shasta County that didn't contain gold. Since that time, gold was being taken out of Mad Mule Valley in seemingly unending proportionsÂ .Â .Â .

Ed O'Neil finished writing the letter, reread the two pages, and nodded. Satisfied that the letter said what he wanted it to say, he folded it and put it in an envelope. He sealed it, and then addressed it. At that moment the door opened and Danny Lyons came in, stamping his feet to get some of the mud off them.

“Whatever you want, boss,” Danny said. “You know that.”

“I want you to deliver this personally.”

Lyons walked up to his boss's desk and took the letter from him. He read the name on the envelope and his eyes widened. Then he read the address.

“It would take too long.”

“Naw, they're real good these daysâ”

“What about a telegram?”

“I've arranged for you to ride in shifts,” O'Neil said. “Horses will be waiting for you at certain stations along the way.”

Lyons, who was twenty-eight, said, “Boss, them riders, they was kids. I ain't no kid.”

He handed Lyons another envelope. This time the younger man looked inside. His eyes widened again, and his eyebrows shot up.

“ButÂ .Â .Â . what if I just leave and keep goin', and never deliver the letter?”

“I don't know what to say,” Lyons answered.

“I know it will,” Ed O'Neil said. “After you're done, you can take the train backâthat is, if you want to come back.”

Lyons put the two envelopes together in his hands.

“You're right, son,” O'Neil said. “I do.” He stopped, and put his hand out. Lyons stepped forward and shook the older man's hand.

“You know what your problem is?” Rick Hartman asked Clint Adams.

“I need to decide what to do next,” Clint said. “What haven't I done yet?”

“Well,” Rick said, giving it some thought, “you haven't been to China or Japan.”

“I don't want to go to China or Japan,” Clint said.

They were sitting at a table in Rick's Place, the saloon/gambling palace owned by Rick in Labyrinth, Texas. Clint had been in Labyrinth a week, and was itching to move on. But to go where, and do what? Those were the questions.

He and Rick were discussing it over a few mugs of beer. Around them, Rick's Place was doing its usual brisk business. The tables were busy, and the girls were, too, carrying drinks to gamblers, spectators, and men who were there just to drink.

“How do you do it?” Clint asked Rick.

“What, twice in the last ten years?”

“Okay,” Clint said, “then how do you leave only once every five years? I'd go crazy.”

“That's because you don't own anything.”

“I do, too,” Clint said. “I've got pieces of saloons, and mines, as you pointed outâ”

“Around the country, yeah,” Rick said, “but no place you call home. Not really.”

“I guess I can't blame you for that,” Clint said. He lifted his mug and finished the contents. “It's just a little late in life for me to try putting down roots.”

“And I can understand that,” Rick said. “But you know, there is something you haven't done yet.”

Clint stared at his friend, then said, “I think I need a shot of whiskey after that.”

Rick raised his hand to attract the attention of one of the girls.

Sweep in Peace (Innkeeper Chronicles Book 2) by Ilona Andrews
The Scandalous Summer of Sissy LeBlanc by Loraine Despres
Jodi_ByTheLight by JenniferLitteken
SEALed With Love (DiCarlo Brides book 2) (The DiCarlo Brides) by Heather Tullis
The Last Town (Book 4): Fighting the Dead by Knight, Stephen
Ten Mile River by Paul Griffin
Temptation (The Temptation Series) by Golland, K.M.
The Wrong Side Of The Tracks (Leighton) by Austin, Amanda
In the Mouth of the Wolf by Rose Zar
Silenced by the Yams (A Barbara Marr Murder Mystery #3) by Cantwell, Karen