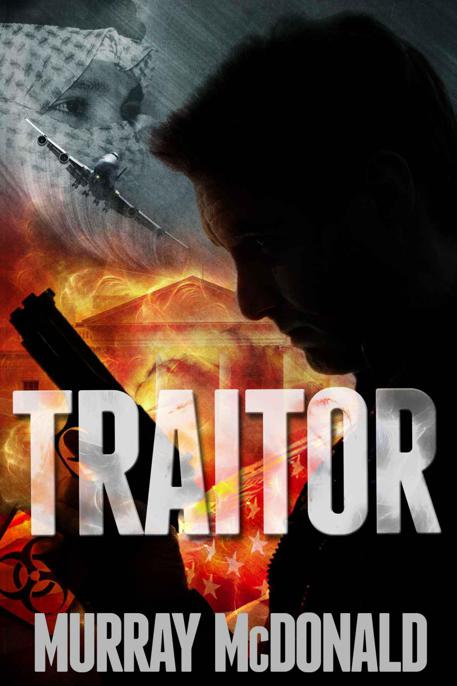 This eBook is licensed for your personal enjoyment only. This eBook may not be re-sold or given away to other people. If you would like to share this book with another person, please purchase an additional copy for each recipient. If you’re reading this book and did not purchase it, or it was not purchased for your use only, then please return to Amazon and purchase your own copy. Thank you for respecting the hard work of this author.

The right of Murray McDonald to be identified as the author of this work has been asserted by him in accordance with the Copyright, Designs and Patents act 1988.

This book is a work of fiction. Names, characters, places and incidents are the product of the author’s imagination or are used fictitiously. Any resemblance to actual events, locations, or persons, living or dead, is purely coincidental.

The sound of the gunshot reverberated through her entire body. Her sole purpose in life was to ensure that wouldn’t happen. She crashed through the door and was met by the sight of her colleague stemming blood from a chest wound. Unfortunately it wasn’t his own.

She swept the Yellow Oval Room as more agents came crashing through the door. Trauma kits in hand, they rushed to the President’s aid.

“Bill?!” she shouted, looking at her colleague, pressing his hand into the President’s wound. The room was clear, except for the President and Bill Jameson, the head of the President’s Secret Service protection team. A National Intelligence Cross lay on the floor next to the President; its recipient was nowhere to be seen. Frankie began to panic. Her training had not covered the loss of a loved one.

“Balcony!” replied Bill urgently, the President’s blood spurting between his fingers as he tried to maintain pressure while handing over to the medics who were flooding into the room.

Frankie rushed across the lounge and burst onto the second floor balcony, her gun at the ready. It was empty. The corner of her eye caught a movement on the railing that ran around the perimeter of the balcony. A thin wire was attached to the railing and trailed down to the ground below. Frankie moved across and watched a man unclip himself from the wire and take off at a sprint.

“Who’s he chasing?! Where’s the shooter?!’ she shouted, scanning the grounds for whoever had taken the shot.

“He’s not chasing, he’s running!” replied Bill, as he joined her.

Frankie lined up her shot. He was already beyond pistol range but still within her capability. The image of the morning they’d had had flashed through her mind. She should be taking the shot, but it wasn’t right. She could still feel him inside her.

She hesitated. “Are you sure?!” she asked, taking aim.

“Shoot him!’ screamed Bill, lining up his own shot.

They both squeezed off shots. They both missed, although only one wasn’t intentional.

“Shit! We missed him!” said Bill, watching Nick disappear around the side of the White House. Bill turned back towards the scene in the lounge and spoke into his mic. “All agents, the shooter is Nick Geller, DIA agent, last seen on the southeast corner of the residence, heading towards Kennedy Gardens. He is armed and extremely—”

A massive explosion interrupted Bill, lifting him and Frankie off their feet and slamming them into the railing. As heavy dust filled the air, the entire West Wing of the White House lay in ruins. The President was holding on by a thread and Frankie held her stomach, praying to God that the baby of the President’s would-be assassin was safe.

Frankie took the seat indicated to her. Her mind was still racing. Barely thirty minutes had passed since the shooting and the explosion. The President was on his way to the Walter Reed National Military Medical Centre. His condition was described as grave. She looked around the room. For every face she recognized, there was another she didn’t. Everybody remained silent. No hum of chatter, just the deathly silence of shock.

From the faces she knew, she was the only Secret Service Agent in the room. She was also, at least she assumed, the only person in the room with intimate knowledge of the suspect. She focused on the word ‘suspect’. She was still struggling to accept that Nick was capable of the deceit involved in the acts he was alleged to have committed. She had no issue believing he was capable of the acts themselves, they were what he had been trained for, that’s what he did - just not to his own President or country.

The arrival of the FBI’s Deputy Director and Bill Jameson, Frankie’s immediate boss, silenced the already quiet room completely. Bill sought her out and, with a flick of his head, summoned her to him. Frankie got up and walked across the room, conscious of every pair of eyes in the room following her closely.

“Could you just give us a few minutes, Frankie?” whispered Bill in her ear. His apologetic tone made it clear that he did not agree with her having to leave the room.

Frankie opened the door to leave just as the Deputy Director’s voice boomed across the room.

“Ladies and Gentlemen, you’ve been selected as the brightest and finest in your organizations, and you’re here to lead the hunt for Nick Geller.”

Frankie closed the door behind her, tears pouring down her cheeks, as she realized that she was not just closing the door to the room. Her life, her career, everything that made her who she was, had just ended. She had also been one of the brightest and finest operatives in the organization. She was the Deputy Lead Agent in charge of the presidential protection detail. No one had ever reached that position at her age and, more surprisingly, not with her background. Her professionalism and ability were without equal and nobody doubted Frankie had a long and illustrious career ahead of her. Had it not been for Nick Geller, Frankie would have been representing the Secret Service on the Task Force. In all likelihood, she was about to be labeled a potential accomplice and conspirator. She began to shake with panic. She hadn’t even considered that prospect.

With her legs no longer able to support her weight, she slid down the wall and pulled herself into a tight ball. The questions poured through her mind, all unanswered.

How did I miss the clues? How could I have trusted him? Will anyone believe me?

Every question had the same answer. A blank. The more she asked of herself, the less sense it made and the more she realized she was going to be suspected.

Nick Geller
. She had loved him. She still did. Love didn’t just stop. They had first spotted each other six months earlier, flirted with each other professionally, both knowing they wanted more. She was delighted when the flowers arrived at the White House addressed to ‘The President’s hot guard’. Embarrassingly, they were handed to her. She wasn’t the only female member of the President’s protection detail. However, it seemed the mailroom were in little doubt and directed them straight to her.

He was everything she wanted from a man. Handsome, well mannered, well travelled, intelligent and, most importantly, she actually felt he could protect her. His eyes pierced into her, opened her up like no one had ever managed before. He had a raw power and energy that very few possessed. There was no doubt in her mind that Nick Geller was a very special man. The man for her. She shared her house, her life, her body and soon a child with Nick Geller. She hadn’t even had a chance to tell him about the test she had only taken that morning, or its positive outcome. She banged her head back against the wall in frustration.

Would he have still done it if I had told him?

It was irrelevant. She hadn’t thought he was capable of anything like this to begin with.

Frankie felt the floor vibrate as a herd of shiny leather shoes thundered towards her with purpose. She pulled herself together, stood up and wiped her eyes as best she could. The thunder rose to a crescendo as the posse appeared at the end of the corridor. Secret Service agents flanked their protectee so well that Frankie could not even see who was coming. She assumed it was either the Vice President or the First Lady, given the size of the protection detail and the entourage in tow.

Her first glimpse of the protectee made Frankie realize that the worst day of her life had just gotten worse. The Speaker of the House drew to a stop by her side. The Chief Justice, Frankie could see, was still pushing his way through the entourage, a bible held high above the crowd, as he maneuvered his way towards the Speaker.

Frankie winced at the Arab name her Muslim mother had insisted on giving her. A name that very few knew existed.

Spellsinger (Avalon: Web of Magic #5) by Rachel Roberts
Olivia’s Luck (2000) by Catherine Alliot
Hit 'N' Run (Under Suspicion #1) by Lori Power
Unknown by Unknown
Library of Unrequited Love by Divry, Sophie
How To Be a Boy by Tony Bradman
Close to Home by Liz Lee
Whisper Falls by Toni Blake
The Body Mafia by Stacy Dittrich
Sons, Servants and Statesmen by John Van der Kiste