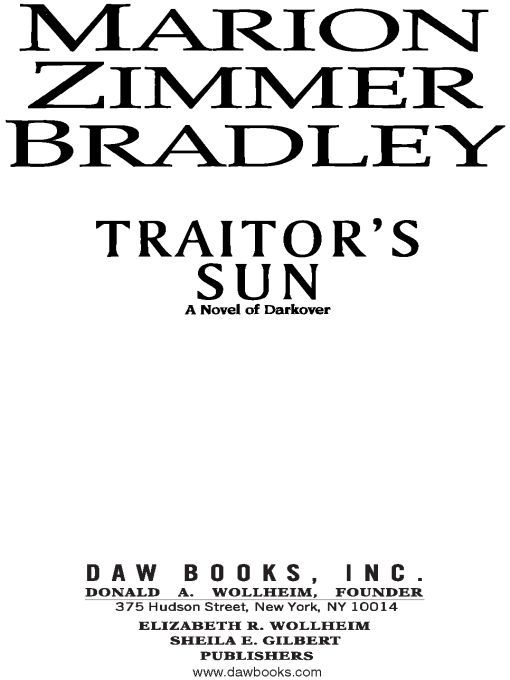 Table of Contents
Title Page
Copyright Page
Dedication
Chapter 1
Chapter 2
Chapter 3
Chapter 4
Chapter 5
Chapter 6
Chapter 7
Chapter 8
Chapter 9
Chapter 10
Chapter 11
Chapter 12
Chapter 13
Chapter 14
Chapter 15
Chapter 16
Chapter 17
Chapter 18
Chapter 19
Chapter 20
Chapter 21
Chapter 22
Chapter 23
Chapter 24
Chapter 25
Chapter 26
EPILOGUE
The Aldaran Gift
Between one stanza and the next something changed. One moment Marguerida was deeply focused on her copying, and the next she felt a chill in her body that made her hand shake violently. The pen sputtered, left several blots, and slipped from her fingers. There was a sharp stab of pain above her left eye, gone so quickly she almost thought she had imagined it. She blinked several times, and the room went from fuzzy to clear at last.
For a few seconds, she just sat there, too surprised to think at all. It had felt like a seizure of some sort, but she had not had one of those in years. It took Marguerida a minute to realize that what she had just experienced had not actually happened to her, but to someone else. Her first thought was of Mikhail, or the children. Her earlier unease, she decided, was almost certainly one of those unwelcome visitations of the Aldaran Gift of foresight. She did not have them often, and they always seemed to center around events that affected her directly.
Then, without any clear understanding of how she knew, Marguerida realized what was wrong. She stood up abruptly, banging against the edge of the desk and knocking the inkwell over. Dark liquid flowed across the blotter, the freshly copied pages, and the front of her gown, but she barely noticed.
Mikhail!
The Alton Gift soared from her mind, breaking into the attention of every telepath in the great building.
What is it?
Something has happened to Regis!
A Reader’s Guide to DARKOVER
THE FOUNDING
A “lost ship” of Terran origin, in the pre-Empire colonizing days, lands on a planet with a dim red star, later to be called Darkover.
DARKOVER LANDFALL
THE AGES OF CHAOS
1,000 years after the original landfall settlement, society has returned to the feudal level. The Darkovans, their Terran technology renounced or forgotten, have turned instead to free-wheeling, out-of-control matrix technology, psi powers and terrible psi weapons. The populace lives under the domination of the Towers and a tyrannical breeding program to staff the Towers with unnaturally powerful, inbred gifts of
laran.
STORMQUEEN!
HAWKMISTRESS!
THE HUNDRED KINGDOMS
An age of war and strife retaining many of the decimating and disastrous effects of the Ages of Chaos. The lands which are later to become the Seven Domains are divided by continuous border conflicts into a multitude of small, belligerent kingdoms, named for convenience “The Hundred Kingdoms.” The close of this era is heralded by the adoption of the Compact, instituted by Varzil the Good. A landmark and turning point in the history of Darkover, the Compact bans all distance weapons, making it a matter of honor that one who seeks to kill must himself face equal risk of death.
TWO TO CONQUER
THE HEIRS OF HAMMERFELL
THE RENUNCIATES
During the Ages of Chaos and the time of the Hundred Kingdoms, there were two orders of women who set themselves apart from the patriarchal nature of Darkovan feudal society: the priestesses of Avarra, and the warriors of the Sisterhood of the Sword. Eventually these two independent groups merged to form the powerful and legally chartered Order of Renunciates or Free Amazons, a guild of women bound only by oath as a sisterhood of mutual responsibility. Their primary allegiance is to each other rather than to family, clan, caste or any man save a temporary employer. Alone among Darkovan women, they are exempt from the usual legal restrictions and protections. Their reason for existence is to provide the women of Darkover an alternative to their socially restrictive lives.
THE SHATTERED CHAIN
THENDARA HOUSE
CITY OF SORCERY
AGAINST THE TERRANS—THE FIRST AGE (Recontact)
After the Hastur Wars, the Hundred Kingdoms are consolidated into the Seven Domains, and ruled by a hereditary aristocracy of seven families, called the Comyn, allegedly descended from the legendary Hastur, Lord of Light. It is during this era that the Terran Empire, really a form of confederacy, rediscovers Darkover, which they know as the fourth planet of the Cottman star system.
The fact that Darkover is a lost colony of the Empire is not easily or readily acknowledged by Darkovans and their Comyn overlords.
REDISCOVERY
(with Mercedes Lackey)
THE SPELL SWORD
THE FORBIDDEN TOWER
STAR OF DANGER
WINDS OF DARKOVER
AGAINST THE TERRANS —THE SECOND AGE ( After the Comyn)
With the initial shock of recontact beginning to wear off, and the Terran spaceport a permanent establishment on the outskirts of the city of Thendara, the younger and less traditional elements of Darkovan society begin the first real exchange of knowledge with the Terrans—learning Terran science and technology and teaching Darkovan matrix technology in turn. Eventually Regis Hastur, the young Comyn lord most active in these exchanges, becomes Regent in a provisional government allied to the Terrans. Darkover is once again reunited with its founding Empire.
THE BLOODY SUN
HERITAGE OF HASTUR
THE PLANET SAVERS
SHARRA’S EXILE
WORLD WRECKERS
EXILE’S SONG
THE SHADOW MATRIX
TRAITOR’S SUN
THE DARKOVER ANTHOLOGIES
These volumes of stories, edited by Marion Zimmer Bradley, strive to “fill in the blanks” of Darkovan history and elaborate on the eras, tales and characters which have captured readers’ imaginations.
THE KEEPER’S PRICE
SWORD OF CHAOS
FREE AMAZONS OF DARKOVER
THE OTHER SIDE OF THE MIRROR
RED SUN OF DARKOVER
FOUR MOONS OF DARKOVER
DOMAINS OF DARKOVER
RENUNCIATES OF DARKOVER
LERONI OF DARKOVER
TOWERS OF DARKOVER
MARION ZIMMER BRADLEY’S DARKOVER
SNOWS OF DARKOVER 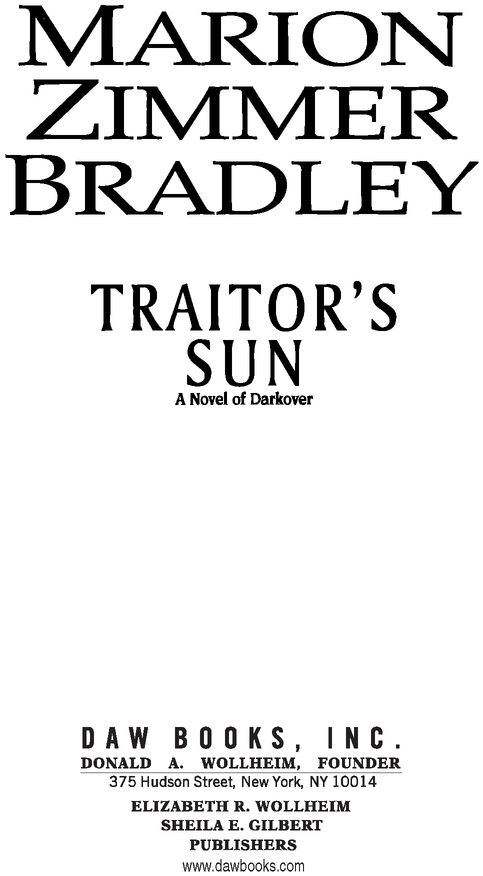 Copyright © 1998 by Marion Zimmer Bradley and Adrienne
Martine-Barnes
All Rights Reserved
DAW Book Collectors No. 1109
DAW Books are distributed by Penguin Putnam Inc.
eISBN : 978-1-101-15758-9
All characters in this book are fictitious.
Any resemblance to persons living or dead is coincidental.
First paperback printing, February 2000

For Susan M. Shwartz,
Scholar, Historian and Friend
PROLOGUE
H
erm Aldaran snapped awake, his heart pounding and sweat streaming down his chest. He gasped for air and struggled to push aside the bedclothes, his head throbbing. He sat there, blinking in the faint light that came from the common room of the small apartment, and swallowed hard. His dry mouth tasted like iron filings and his feet felt alien and disconnected from his body. Though his nightrobe was almost drenched around his broad chest, part of the sleeve was still dry enough to use to wipe the moisture off his face. As Herm stood up, the room spun, and he nearly sat down again.
At last his body stopped shaking, and his heart slowed to a more normal rhythm. He glanced at Katherine, his wife of more than a decade, still undisturbed by his movements. In the dim light Herm could see her dark hair spread across the pillow, and the sweep of her brow below it, the curve of her mouth beneath the strong nose. Not for the first time he wondered why such a beautiful woman had consented to marry a plain fellow like himself. It was a puzzle, but he knew it was not because he was wealthy—he was not—or had the ambiguous honor of being the Senator from Cottman IV, as the Terran Federation designated Darkover, the world of his birth. He gazed at her, letting his mind wander a bit, and felt himself settle into relative calm.
Herm realized he would not be able to go back to sleep anytime soon, so he rose and left the bedroom as quietly as possible, careful not to rouse Katherine. He peeped around the thin partition that separated their sleeping quarters from those of their two children and found them undisturbed. Then he padded across the dingy tiles in the small food preparation station and opened the cool cabinet. The carafe of juice was cold in his fingers, and he had a desire to drink right out of the lip of it. Until he held it, he had not realized he was still trembling slightly. He forced himself to find a glass, and poured some of the yellow liquid into it. Then he gulped down half the glass, letting the tart flavor of the juice wash away the nasty taste on his tongue. The cold liquid hit his belly like a blow, and for a moment he felt as if he had swallowed acid. Then the dreadful sensation vanished, although his stomach continued to protest for several seconds. He knew it was only an illusion, but he had the feeling that he could sense the sugar in the juice entering his bloodstream. His breathing deepened, and he shivered all over, chilled where he had been burning only a few moments earlier.
Herm sank down onto one of the stools that stood beside the long counter which served as the eating area, put the glass down before he dropped it, and forced himself to empty his mind. A sense of utter
wrongness
played along his nerves, fretting like the discordant notes of some classic industrial symphony. That style of music had enjoyed a resurgence during his first years in the Chamber of Deputies of the Federation legislature, and he had been dragged to a few concerts. It had stuck in his mind, much to his disgust, for it was not music as he had thought of it, but more like noise, and rather unpleasant noise at that. He hated it, as he hated the stool, the smallness of the room in which he sat, and the cramped quarters assigned him as Darkover’s Federation Senator.
ADS
15.4Mb size Format: txt, pdf, ePub

A Fall from Grace by Robert Barnard
Un.Wavering (Claimed Series Book 3) by Reese Morgan
Rocks of Ages by Stephen Jay Gould
A Touch of Night by Sarah A. Hoyt
Blindsided - A Stepbrother Romance Novel by Kylie Walker
Empire of Blue Water by Stephan Talty
The Super Spies and the Cat Lady Killer by Lisa Orchard
The Iron Grail by Robert Holdstock
Lost in America: A Dead-End Journey by Colby Buzzell
Missing Children by JIN