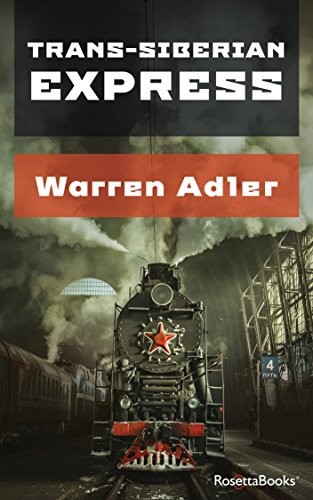 Available in all formats as eBooks and Print on Demand wherever books are sold online and off.
To order any of these titles or for more information visit www.WarrenAdler.com

All rights reserved. This book, or parts thereof, may not be reproduced in any form without permission. This novel is a work of fiction. Names, characters, places, incidents are either the product of the author's imagination or are used fictitiously.

To My Three Sons:

NIKOLAI ANDREYIVICH BOGACH,
Chief of the Guards Directorate of the KGB

CARLYLE,
Secretary of State of the United States

VIKTOR MOISEYEVICH DIMITROV,
General Secretary of the Communist Party of the Soviet Union

IVAN VASILYEVICH GODOROV,
a Georgian and former prisoner under Stalin

PRESIDENT OF THE UNITED STATES

SOKOLOVICH,
a senior inspector of the railway

MR. AND MRS. TRUBETSKOI,
a Communist Party official, and his wife

VOIKOV,
officer of the railway police

AN
early spring sun, all light and no warmth, was slipping behind the gargoyled, columned mass of the Yaroslav station as the black Zil pulled smoothly up to its main entrance. The policeman posted there stiffened as he noticed the large, official-looking car.

The driver and his companion in the front seat, both small-eyed, high-cheekboned Slavs, got out and talked briefly with the policeman. Then they returned, pulled several pieces of baggage from the trunk and strode swiftly inside the station. Immediately the second car, a Chyka, pulled up. Five tall, dark-suited, somber men quickly emerged and fanned out. Two positioned themselves on either side of the entrance, conspicuous in their alertness, while the others walked through the station entrance and disappeared into the converging crowd of people.

Inside the Zil, Alex Cousins glanced at his watch. It was 4:15. The train was scheduled to leave at five, precisely five, Zeldovich had said confidently.

“They will take care of the details,” Zeldovich assured him.

“Thank you,” Alex responded in Russian. He had no illusions about Zeldovich.

It had been an uneventful trip from the dacha near Barvikla. Viktor Moiseyevich Dimitrov, the sixty-nine-year-old General Secretary of the Communist Party of the Soviet Union, had been expansive at lunch. His appetite had returned along with his color, and he had stuffed himself with huge portions of black bread and globs of sour cream heaped on top of deep bowls of borscht. The chemotherapy was working, Alex had observed, his doctor’s pride expanding as he reviewed the charted progress and the past six weeks of endless diagnosis, observation and treatment. At best, the disease was tricky, and as cunning as a jungle beast. Acute myeloblastic leukemia was a microscopic war between the proliferating white cells and the rapidly weakening red cells in Dimitrov’s blood. And the reds had been losing. Now Dimitrov, alert again, was no longer in the depressed manic state Alex had initially encountered.

At lunch a waiter had brought a fat bass, broiled brown and dripping with butter. Dimitrov had watched its arrival, smiling broadly with boyish pride. Alex had been allowing him out to fish again in the Moscow River, which meandered a few yards from the rear of the dacha. Fishing was Dimitrov’s one passion, aside from the exercise of power, and returning to it had restored the General Secretary’s buoyancy, reassuring him that he had been snatched, however temporarily, from the grave.

Alex had only picked at the fish. Despite his anxiety, he was excited by the prospect of this Siberian journey. Although, under different circumstances, he now would have been searching back in time, with all the emotion that nostalgia engenders, to prepare his mind for the mystique of the adventure. “It is a legacy of the soul,” his grandfather, that old Siberian fox, would have said. But to begin such a journey under duress seemed, somehow, incongruous, against the grain. He looked down at the fish, runny with butter, the skin crisp and shiny, wondering if he could force his appetite.

“Delicious, Kuznetzov. Eat!” Dimitrov commanded, jabbing his knife forward, a trickle of butter escaping along the side of his mouth. Despite himself, despite what he suspected, Alex felt satisfaction in Dimitrov’s enjoyment. It was the damndest personal sensation, this dichotomy within himself, this raging war between his odd affection for the man and the knowledge of his impending act that had, somehow, seeped into his brain. Could it be possible he was mistaken, that all the comings and goings, the odd bits of information, the strange admissions and little confessions of Dimitrov himself, were only a distorted view through some faulty prism? I am a doctor. I am apolitical. You had no right to draw me into this, he wanted to shout across the table, trapped now like a fly that has fatally touched the flypaper with the tip of one wing.

“Why the long Siberian exit?” he had asked. “A flight would be much faster.”

“Nonsense,” Dimitrov had said blandly, as if he were persuading him merely to have another glass of brandy. “How could you deprive yourself? How many chances do you get in life? Whoever heard of a Russian with no curiosity about his past? You’re here. Don’t be foolish. I insist.”

“But my wife—” Alex had answered mildly, not able to bring himself to even the first plateau of protest. His wife was certainly no reason to return. He might have been more accurate to say, “My life.”

“Take a look at where you began,” Dimitrov persisted, knowing that there was truth there, a match to dry tinder, for Alex had often longed to see the place from which his grandfather had escaped. But his escape had been merely physical. In the old man’s mind and heart, he had never really left Siberia.

“Nonsense,” Dimitrov said. “It is my gift. Consider what you have given me.”

Another old fox, Alex thought. Why don’t you tell me the truth? I know too much. Perhaps you’ll never let me out.

“One more week. What will it matter?”

He had been gone six weeks.

“The Politburo meets in seven weeks,” the American Secretary of State had repeated again and again. “You must keep Dimitrov alive until that meeting,” he might have said if he had not been so well schooled in obliqueness. Alex had, of course, received the message and had done his duty. How naive and ineffective the president and the secretary now looked in retrospect. Dimitrov had outmaneuvered them both. Still worse, he, Alex, could be characterized as a coconspirator. And this trip was his fat reward for success. Let me put you in a rolling prison across the wastes of Siberia while I prepare a holocaust. Did they think he had the brains of a pea? Suddenly the idea of seeing his wife again—dear, bland, irritating, unaffectionate Janice—seemed almost attractive.

How they must have chuckled over their good fortune in discovering him, a Russian-speaking doctor who was an expert on leukemia. And he had been right under their noses at the National Institutes of Health. He had been very unreceptive. Couldn’t they find someone else for this job? He was beyond politics, disgusted with their silly little power games. The preservation of human life, the alleviation of suffering, was the bedrock of his motivation. He had actually willed himself to be apolitical, dismissing everything that was not within the confines of his expertise. In his stupidity, man inflicted so much misery on himself. He could not seem to organize society for his own benefit. But that was the politicians’ problem. One could not bleed over uncontrollable factors. At least in his field he could focus on a recognizable enemy. All else was trivia, he had convinced himself. Now, in Moscow, the events of the last six weeks had effectively demolished that self-delusion.

As Dimitrov’s strength returned, so did his cunning. He had struck exactly the right chord for a Russian—antecedents, roots. Russians and their damned ancestor fixation. To this day, every child born was given two names—his own and his father’s. “Aleksandr Aleksandrovich Kuznetzov” was the name which appeared on Alex’s original birth certificate. He had changed it to Alexander Cousins, in spite of his father’s passionate opposition, since the practical advantages for his career were obvious. But he could not change the heritage that had been programed into his fantasies from birth. Siberia—a myth weathered and matured by repetitive storms of memory.

His grandfather had been caught in the Czar’s penal machinery as a boy and sent to Siberia as punishment. He had helped build the Trans-Siberian Railroad, and his labor shortened his sentence. He landed in Irkutsk, which those given to sentimental exaggeration had dubbed the “Paris of Siberia.” After several years there, his grandfather took his wife and young son and escaped to America. It was with these stories of youth, hardship, despair, danger and escape that Alex’s ancient gnarled grandfather had mesmerized him, ever since he was old enough to understand. As he grew older he could pick Siberia out on a map, roughly along the 55th degree of latitude. He learned that it was an area of five million square miles that could encompass all of the United States, including Alaska, and all of western Europe, and still have hundreds of thousands of square miles left over.

When his grandfather eventually escaped from Siberia, the route took the family through farms and cattle ranches, through trackless virgin forests, around the earth’s deepest lake, to heights where the sky is fair for all but sixteen days of the year, down to places where insects swarmed to torture men and animals, through pockets scourged by unspeakable disease and Manchurian tigers. During those interminable first days with Dimitrov, Alex had, of course, dwelt on the stories with relish, especially after seeing Dimitrov’s enchanted reaction. It was all part of the treatment. Who could have expected it to be flung back at him like a weapon?