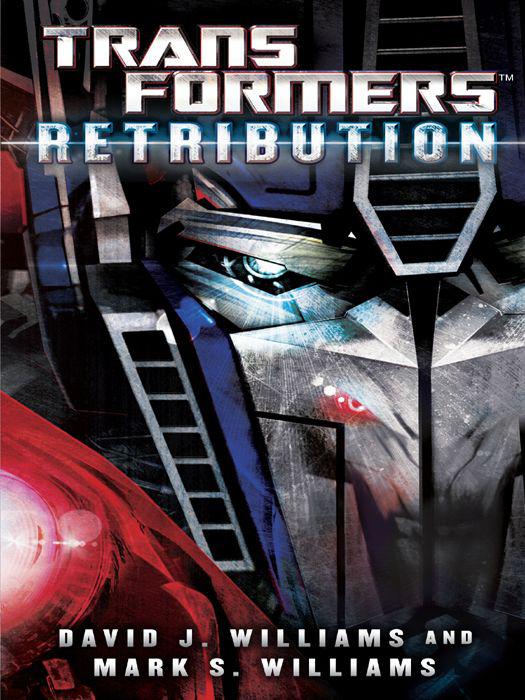 Transformers: Retribution
is a work of fiction. Names, places, and incidents either are products of the author’s imagination or are used fictitiously.

Copyright © 2014 by Hasbro, Inc. All rights reserved. Based on Hasbro’s Transformers
®
Action Figures.

Published in the United States by Del Rey, an imprint of The Random House Publishing Group, a division of Random House LLC, a Penguin Random House Company, New York.

HASBRO and its logo, TRANSFORMERS, and all related characters are trademarks of Hasbro and used with permission. © 2014 Hasbro. All rights reserved.

Yesterday Shockwave came to me again. He talked and talked—he is so proud of himself, so arrogant. And yet (as is ever with such hubris) the real meaning was in what he did not say. He claims the Decepticons have almost won control of all Cybertron, but I know better. Ultra Magnus and his fearless Wreckers are unleashing havoc … hit and runs on convoys, surprise raids on isolated bases, sudden severing of supply lines … guerrilla war gradually intensifying to the point where now only the Decepticon forces in the major cities are secure from attack
.

But Shockwave could care less. His lord and master Megatron craves total domination, but Shockwave thrives on chaos. It took me longer than it should have to understand this—to realize that Shockwave now regards all of Cybertron as his laboratory. For him, the Wreckers are simply culling the weaker Decepticons, making the race as a whole that much fitter. His is the most dangerous kind of insanity: the kind that stems from logic run riot. Even as the Wreckers inflict ever more damage, Shockwave cultivates his larger agenda. To him, the Wreckers are unwitting tools
.

Whereas I know the role that he expects from me. Again, he would not tell me directly. But here in the Hall of Records, I can hear his Insecticon guards buzz outside
my door, and I know that they will lead me elsewhere very soon, to a place I would rather not go. It is not the impending pain I fear, though I would hardly claim to welcome it. It is the thought of the forces Shockwave might inadvertently unleash. It is disquieting to reflect that there are far worse outcomes than his crushing of all resistance on Cybertron
.

What is happening half a galaxy away is testament to that. So far from where I write this, yet I know enough of it. Even if so many of the mighty space bridges have fallen into disrepair—even if so much of our once-great culture lies in ruins—I am still one of the Thirteen, and I am not deaf to the manifestations of my brethren
.

Nor am I unaware of the machinations of ancient enemies. Civil war is the worst kind of war; every shot fired, every blow struck, all of it leaves one’s people that much more enfeebled when it is time to face the real foe. Had I been able to spend enough time with Optimus before he left our battered planet in search of the AllSpark, I might have had the chance to tell him that … to explain to him what the gladiator who once called himself Megatronus knows intuitively, that an infinite universe contains infinite opponents by definition. To learn to live in peace with this reality: there can be no higher aspiration. And even though Megatron will almost certainly never attain any such serenity, his way of fire and sword has nonetheless granted him the easier path
.

At least in the short term
.

And though I am a being that measures time in eons, the short term is all I have now
.

Because now I hear them: Shockwave’s personal guards striding toward the door. They will drag me from the solace of my records, from the Covenant of Primus that I have hidden in a place they never will find, all those pages containing words of the future crashing like ocean on the
jagged shore of now. I stand upon that shore and yearn for days when I was younger. Oh, yes, I admit it. Why should I not? Even as I know it for the ultimate temptation … and thank Primus himself that I am too old for it to sway me: to stride onto the bridge of a ship plowing across the parsecs, readying weapons with which to rend your foes to pieces. Megatron, I envy you such simplicity of purpose. Would that I could have turned your malice to better ends. Would that I could somehow stop those who now advance to claim me. But all I can do is write these words and hope that somehow they make it past my captors to tell the tale of events heroic and terrible … an epic inferno to echo all the way to the day in which you (in a happier time, a sunnier time perhaps) sit here and read and wonder
.

A
N ENDLESS WALL OF GLITTERING STARS; A SINGLE
spaceship sweeping in toward it.

For weeks, the
Nemesis
had traversed the gulf between two of the Milky Way’s spiral arms. Now that journey was almost over. Ahead was the edge of the Orion Arm; that of Sagittarius lay far behind. As the
Nemesis
gracefully slipped out of faster-than-light mode, its cloaking systems kicked in automatically. Dozens of sensor dishes bloomed like flowers along the titanic warship’s spinal mount, scanning the approaching field of stars, processing everything they saw, and relaying their findings to the ship’s bridge.

On the bridge, Starscream and Soundwave studied the readouts. They were the only Decepticons on the flight deck. It didn’t take much of a crew to run the ship in standard transit mode, and that was just fine with Starscream. If they found anything, he intended to be the first to know. It wasn’t like the ship was going to tell them; the
Nemesis
had sustained considerable damage during its pursuit of the Autobots; not only had it lost the ability to shift out of spaceship mode, it was no longer sentient. The rest of the Decepticons seemed to regard that as a loss, but Starscream relished the fact that the thing had finally shut up. The last thing he needed was a spaceship with its own agenda, for power politics among the Decepticons was complex enough as it was. Let Megatron
sulk in his quarters; Starscream would rather watch from the front than give orders from the rear, would rather bide his time, for he knew that after the inevitable victory over the renegade Autobots, the real struggle between him and his master would begin. Until that day arrived, he took what satisfaction he could in bullying those below him. He turned his ruby-red eyes on Soundwave and pointed a long finger at him.

“At once,” Soundwave replied in his usual monotone. Starscream knew there was no need to vocalize what was merely standard operating procedure, but he did it anyway to remind Soundwave that he was second in command on this bridge. He enjoyed reminding all of them every chance he got. Soundwave might be Megatron’s loyal pet, but as far as Starscream was concerned, he was nothing more than a jumped-up communications officer with visions of spymaster grandeur, though he was nothing if not obedient: Starscream watched the results from the secondary scans flicker past him. Dozens of screens lit up as the
Nemesis
searched system after system, star after star—a search that now expanded to include substellar material: brown dwarves, burned-out suns, nomad planets, wayward rocks …

“Isolate that signal!” Starscream barked. Soundwave was already on it; along one wall, a wraparound screen focused on the system in question, several layers back from the edge of the spiral arm. It was a young star surrounded by a huge cloud of debris. A typical circumstellar disk … but Starscream’s eyes narrowed, for such debris would be the perfect place for wounded prey to hide. And as the
Nemesis
’s mainframe broke down the signal’s composition, Starscream felt an emotion he rarely knew: joy.

For it was unmistakably an echo from the engines of the Autobots’ Ark.

Perhaps the Autobots were hoping the various debris and gravitational distortions could hide them. If so, they had underestimated the
Nemesis
’s powerful sensors. Back in orbit around Cybertron, it had been a state-of-the-art scientific station while in its Trypticon mode. And now its sensors were put to the test even further: They picked up a second signal, buried still deeper in the mix …

That wasn’t what Starscream was expecting him to say, but he instinctively hid his surprise. So the Autobots were in desperate straits. So much the better. Apparently they were hoping that someone besides the Decepticons was out there to rescue them from whatever they’d stumbled into.
Pathetic
, Starscream thought. They weren’t warriors by trade; they could boast of nothing approaching the instinctive grasp of tactics possessed by every Decepticon. There were times he almost felt sorry for them. It wasn’t their fault that they hadn’t been born for battle. Yet they’d made matters worse for themselves by entrusting their leadership to a glorified data clerk. That the no-name Orion Pax could become Optimus Prime was offensive to every self-respecting Decepticon. His leading the Autobots to their demise was only a matter of time.

Now that time had arrived.

Starscream thought for a moment. “No. You stay here and monitor the signal. If it changes in any way, contact me immediately. I shall go and alert Lord Megatron myself.”

“As you wish, Air Commander.”

M
EGATRON HAD LITTLE USE FOR AMENITIES
.

He’d declined to use the captain’s quarters as his lair,
instead opting to set up his command post in a massive observation bubble that sat high atop one of the
Nemesis
’s aft superstructures. In peacetime, that bubble had been the site of telescopes that charted faraway stars, but all such equipment had been jettisoned long ago, making it the perfect place for Megatron to brood and plan high above the troops he commanded deep in the bowels of the vessel. The Decepticon leader had felt the ship drop out of lightspeed and knew that very soon those subordinates would be clamoring for orders.