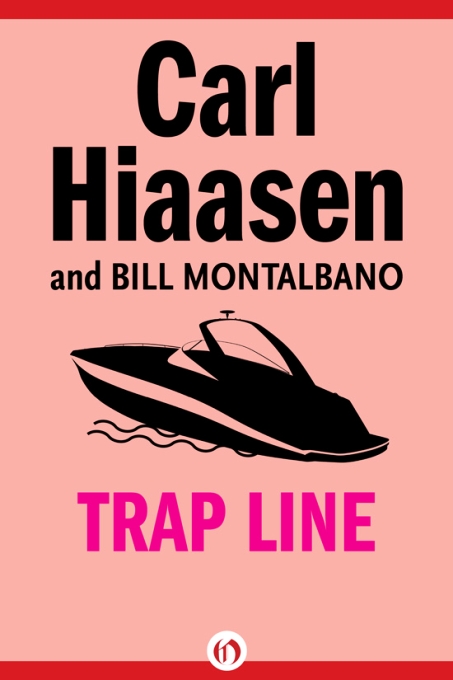 THEY HAD AGREED
to meet at the Omni Hotel, a double obelisk that rises on Biscayne Boulevard near the bay. The businessman had booked a suite for two weeks; bayside, as always.

Manolo flew up from Key West. He had been told to come alone, so he had. He took a Yellow Cab from the airport. It overheated twice on the short trip.

Inside the hotel complex, Manolo wandered like a rat in a maze for ten minutes before locating the right elevator. He stepped out on the eleventh floor and strode across a thick amber carpet to the businessman’s suite. Manolo knocked twice, then shifted the briefcase to his right hand.

The Colombian, lithe and bronzed, answered in bare feet and white shorts with a royal blue stripe. The two men shook hands and exchanged greetings in Spanish, their accents as distinct as Boston and Biloxi.

Manolo followed the businessman along a trail of scuffed sneakers and sweaty socks to a chilled bucket of champagne. He lay the briefcase on a marble coffee table. The Colombian poured two glasses. Manolo, who hated champagne, paid no attention to the extravagant label.

“For my backhand,” the Colombian explained. “If I improve my backhand, I am unbeatable, I assure you. I have a lesson in one hour.”

“A primitive model. These are truly sophisticated.” Jorge set his glass on the coffee table next to the briefcase. “Everything is here, no?”

“Good. There are no problems?” The question was rhetorical. The Colombian would have known about problems.

“Things are going smoothly,” Manolo answered, gesturing toward the city’s infant skyline. “The market continues to be magnificent.”

“Did you have a good flight from Key West?”

The Colombian slipped into a canary yellow pullover and attached a gold Piaget to his left wrist. A young woman with coffee-colored eyes and small breasts appeared briefly, nude, in the doorway to an adjoining room. The Colombian waved her away.

“I need a favor,” he said, sipping slowly.

Manolo knew there were no favors, only debts. He also knew that his side of the ledger was perpetually red.

“I have some friends,” the Colombian continued, “who will be needing some reliable transportation.”

“In about two weeks they will be on an island in the Bahamas. They will need a boat to the mainland. Key Largo will do …”

“You mean Colombians, don’t you? Your people won’t run Colombians. Not long ago, if I recall,
your people
brought a hundred thousand aliens into this country from a port in Cuba. Mariel, wasn’t it?”

“That was different,” Manolo said, reddening.

“Oh, no, my friend. A lot of your people did that purely for money, not out of decency or love of family. Is that not so?”

The Colombian picked up one of the tennis rackets and ran strong fingers across the strings.

“Think of this as a family mission, Manny. Like Mariel, but perhaps a bit less heroic, more private. These friends are important to me. I need them here, and, therefore, you need them, too.”

“They will help assure that we do not lose any of this
magnificent
market.”

“You don’t understand. The boat captains who work for me will not do it, no matter what I offer them. Grass, pills, coke—anytime, by the box or the ton. Even guns, if you like. But not people.”

“But I do not understand. And I dismiss the distinction as irrelevant.”

“Look. People are not bales or boxes. You can’t heave them over the side when the Coast Guard shows up and turns on the blue light.”

The Colombian slammed the racket against the edge of the coffee table.

“Basta!”
he commanded. “I need one man for one run. That is all. We will take precautions to see that there are no questions afterwards.”

“No!” Manolo urged. “This isn’t the Guajira. Key West is a small town where dead people still attract a certain amount of attention.”

The Colombian shrugged. It had been an uneven struggle, and it was over. He reached for the champagne.

“Handle it however you must. Go home and get me a captain. The best one you can find. Persuade him, if necessary.”

The Colombian smiled, and his new American teeth gleamed like perfect ivory tiles. “You will try, my friend, and you will be successful. You are an honorable man, a valuable man.”

“It has been a good month for us, no?” the Colombian said brightly. “I’m not even going to count what’s in the briefcase. That is how much I trust you.”

The preposterous lie amused Manolo. The cash, he knew, would be sifting through an electronic counting machine within the hour.

“Call me soon,” the Colombian ordered at the door.

“Of course,” Manolo replied. “Good luck with your backhand.”

In the lobby, he patted his jacket to make sure the airline ticket was in his pocket, then walked out into the suffocating heat to hunt for an air-conditioned taxi.

THE
DIAMOND CUTTER
, a forty-three-foot Crusader, Key West-built with an 892 GMC diesel, cleared Stock Island twenty minutes after dawn. Albury, splay-legged at the helm, drank bitter coffee from a chipped white mug. Jimmy ran a rag across the wheelhouse windshield.

“After five days’ work, it ought to,” Albury said. The parts alone had set him back a thousand dollars.

“I hope so. Anybody needs a good day, it’s us. Won’t be long until the end of the month.”

Jimmy laughed through the new gold beard that dwelt like peach down on his sunburned face. Reflexively, Albury turned the
Diamond Cutter
to the southeast, where the first line of crawfish traps rested on a shelf of coral. He could have found it blindfolded. The fine porcelain sky, the rising white sun, the hot and cool sea hues of the Florida Straits; these were Albury’s birthright. He had first made the trip in another era, with his granddaddy sitting on a sun-bleached whiskey crate steering an old one-lunger with no winch and hardly a wheelhouse. And, since that morning, how many times, in how many boats? And how long since the excitement had died? Too long.

The end of the month. Surely it had not weighed so heavily on his granddaddy, like the massive, unsheddable shell of a loggerhead. Albury could not imagine the old man fretting in his pine cabin, neatly stacking the bills as they piled up like driftwood.

But now, with his boat cutting a clean vector toward the crawfish waters, Breeze Albury mentally riffled the accounts due that awaited him in the sagging trailer that his granddaddy would have rightfully spurned as a chicken coop. Boat payment, dockage, fuel, parts; then there was the rent—pure robbery—car payments, the electric, and, of course, the installment on the TV.

Against these he weighed the account of Albury, William Clifford. This month it came out worse than usual. Fishing had been good, until the engine quit. The parts had taken cash, plus he still owed for the cypress on two hundred new traps.

And spikes. He had promised Ricky a new pair. Pitching was hell on spikes. His mind held the image of Ricky’s arm flashing, the streaking ball a white pea as it flew to the plate, the foot slamming down hard in a balanced follow-through.

Albury smiled. He leaned back from the waist and let his belly steady the wheel, gentling the lobster boat through the quiet morning sea. He would buy the new spikes, pay on the boat and whatever else he could, then let the unpaids chase him. Wouldn’t be the first time. Let them take back the color television if they wanted it bad enough.

Albury lit a cigarette and nudged the
Diamond Cutter
on a course that would intersect up-current with the first trail of orange-and-white buoys that marked his trap line.

“Hey, Jimmy,” he called down to the deck where the young mate was coiling rope. “The captain needs a cold beer.”

A few minutes later, Albury jockeyed the boat with unthinking precision as Jimmy hauled the traps. He would snare the pumpkin-sized buoy with a swoop of long practice, fix it to the winch, and watch expectantly as the cypress trap spun to the surface. Albury only half-heard Jimmy’s running count as he stripped the traps, rebaited them with a strip of cowhide, and sorted the catch.

“Breeze,” Jimmy said, “what say we keep a few of these shorts today?”

Shorts were the undersized crawfish that measured less than five and one-half inches from bony carapace to tail. Get caught with them and it could cost a couple hundred dollars, except that no self-respecting crawfisherman would get caught. If the Marine

Patrol happened by, all you had to do was cut the weighted sack from a line on the stern and let the delicious evidence sink. There weren’t many Key West captains who could resist the shorts now and then; easy to sell and good to eat. Albury could have gotten away with it, but Laurie would have lectured him for sins against the ecology. Risk was another factor. A fine was the last thing he needed, especially with the end of the month coming. You could never tell about the Marine Patrol. One morning they wave hello, next morning they get nasty and board you.

“Hey, Breeze, you been to Miami a lot.” Jimmy had climbed into the wheelhouse with two fresh cans of Bud. Albury drank deeply as the
Diamond Cutter
plodded dutifully, like a milkman’s horse, toward the second line of traps.

“Sure, I spent some time in Miami. Why?”

“I just wanna know if it’s safe up there.”

“Safe for what? Christ, don’t tell me you never been.” Albury was incredulous.

“Sure, with my dad, a few times. But it’s been a couple years. I want to know is it safe for Kathy, if I take her up there with me. You read about all these murders and crazy shit …”

“And you’ve been married …”

“About three months. She wants to go up there and do some shopping.”

Albury laughed. “Sure. It’ll be fun.”

“Well, I asked her what’s wrong with shopping on the island, but she says everything’s too ugly or too expensive down here.”

Jimmy ran a calloused hand through his bleached-out hair. “Maybe so,” he said.

Albury drained the beer, squashed the can, and tossed it neatly into a broken lobster trap on deck. He gestured toward the windshield. “Trap line comin’ up.”