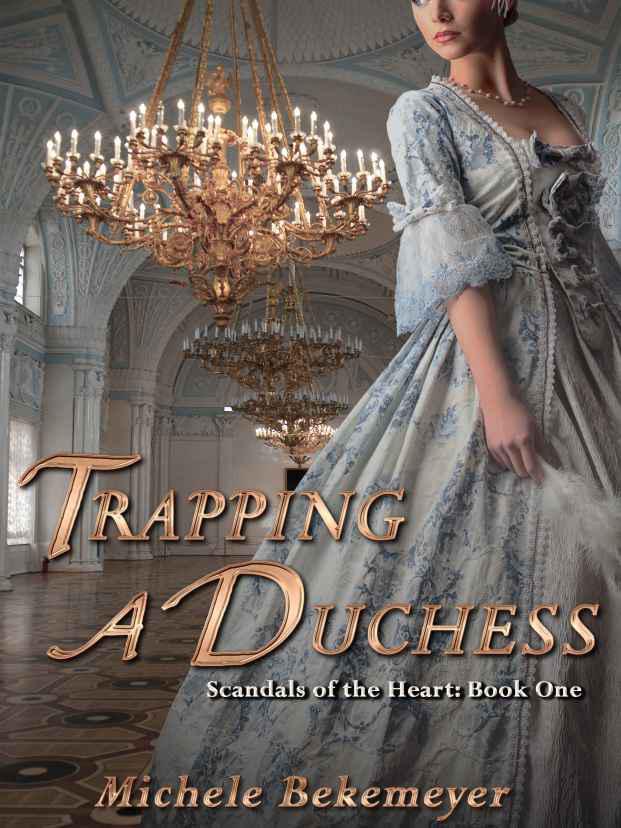 Where was Lord Winterley, anyway?

Other titles by Michele Bekemeyer:

For my daughters Molly and Elise, who put up with endless hours of “
Just five more minutes
.”

For my mom, who taught me early on that nothing worth having ever comes easy, even though she made it look so.

For Michael, a better friend than I deserve.

And for John, love of my life and the man against which all my heroes are measured.

Without you, this book would never have come into existence.

This book is published by
Burning Book Press

All rights reserved under the International and Pan-American Copyright conventions.

No part of this e-book may be reproduced or transmitted in any form or by any means, including emailing, printing, photocopying, or faxing without prior written permission from Burning Book Press.

This is a work of fiction. Names, places, characters and incidents are either the product of the author’s imagination or are used fictitiously, and any resemblance to any actual persons, living or dear, organizations, events or locales is entirely coincidental. This book is for sale to ADULT AUDIENCES ONLY. It contains sexually explicit scenes and graphic language which may be considered offensive by some readers. Please store your files where they cannot be accessed by minors.

The hesitation with which the waiter posed the question was telling, but wasn't enough to make Lord Andrew Rupert Wolter, future Duke of Tolland, reconsider his demeanor. "Indeed. And you could save us both a ton of time by leaving the damned decanter on the table." His irascibility was easily explained. He was, after all, alone at a gentleman's club wearing wedding attire.

"Yes, my lord." He set the brandy down as instructed. "If you need anything else—" At Andrew's dismissive flick of the wrist, the man bolted like a frightened mare.

"Anything else will be the bloody death of me," Andrew mumbled blackly as he poured himself another drink. He let out a low curse; he'd spilled as much on the table as he got in the glass. He was not, as the curious onlookers might presume, nursing a broken heart. He was soaking his wounded pride. The brandy was meant to hasten the process.

A drop of amber liquid slid down the rim of his glass. He traced it away, as if doing so would erase the events of the morning. For nearly two hours, he had waited at the front of the church for his bride to make her walk down the aisle. He kept his composure as the ceremony's start time passed and the guests grew restless. He hid his irritation behind a vaguely impatient smile when their excited smiles melted into piteous frowns. But the barely concealed whispers whipped his anger into something dangerous. By the time he left the chapel, fury had overcome grace. Hellfire in his eyes, he had stormed out, his murderous expression a warning to any who thought to follow. None had been brave, or foolish, enough. "God damn it," he grumbled as the last of the liquid slid down his throat, landing in his stomach with a thump nearly as audible as his glass hitting the table.
And God damn her.

He was betrothed to Lady Sophie Sinclair before they were in leading strings, the result of a decades old friendship between her parents and his own. Despite society's thoughts on arranged marriages—barbaric!—Andrew had not contested the match. A preselected bride meant he wouldn't have to venture into the ton's ballrooms and wade through a jungle of overreaching mothers and simpering debutantes to find one. He could have done worse than Sophie.

She wasn't an incomparable beauty, but she was far from unattractive. She was, in his opinion, simply awkward. Her doe-shaped eyes and full lips were out of proportion with the rest of her features, and the pale-as-porcelain skin covering her spindly frame gave her an appearance of ill health. Despite those flaws, she had never lacked for confidence. Being daughter to the highly regarded Earl of Clement with a brother who was a darling of society had offered an acceptance which might not otherwise have existed. Like Andrew's, hers was a family envied and emulated by society. Yet for all her legendary charm, Sophie was one of two females of Andrew's acquaintance with a stubborn streak equal to his own. The other was Andrew's sister, Alexandra.
What
, Andrew wondered with a sneer,
would she make of the situation?
Of her best friend reneging on her promise and leaving those she supposedly cared about to deal with the scandal as she fled into the morning?

He scoffed, shaking his head as his lips pressed into a thin line.
Flighty, fickle females,
his wounded pride complained. Even in hindsight, he could recall no behavior to signify her actions. Though he had never considered her as emotionally engaged as he, she had never been standoffish. Had he taken their long acquaintance for granted and somehow missed a pertinent detail? He shook his head.
No
, he felt confident that he knew everything about her.

Well, obviously not everything,
his pride interjected. He had no idea she was so bent on not marrying him that she would choose a life of ruin over becoming his wife. He gripped his glass until it was seconds away from shattering. He glanced again at the clock on the mantle, as he had done every five minutes or so since his arrival.
Four-thirty
. Had only three hours passed since he abandoned his post in front of the crowded church? He pinched the bridge of his nose with his index finger and thumb. What he wanted to do was put his fist through the wall, a need so intense he struggled to control it. A fresh wave of anger rolled through him. His fingers clenched tight, until his already white knuckles looked fit to burst from his skin.

"Damn it," he muttered, squeezing his eyes shut against the fury thrumming through him at sickening intervals. He was not a man prone to violence, usually content to release his frustrations with a hard ride until the physical need in him was spent. When that did not work, Gentleman Jackson's offered an outlet, provided he could find a willing opponent. A fierce gleam in his eye meant there would be hell to pay, which more than one adversary had learned the hard way. Tonight, however, the intensity of his feelings reached dangerous heights. His fingers, deprived of movement, began to twitch. Flexing them, he breathed deeply. After a long moment, his muscles eased. He leaned back, tilting his head towards the ceiling as his eyes drifted closed.

"I thought I might find you here," said a solemn, familiar voice.

Andrew looked up into his friend Simon's face.
Both of them. Christ.
He was going to have one hell of a headache tomorrow. "Why are you here?" he asked, his words more than a little slurred. His tongue felt thick, his mouth dry. He blinked twice and swallowed hard, but the motion only settled his frustration deeper in his throat.

He kept a wary eye on Simon as he settled into the seat opposite him. Despite years of friendship, it would take little more than a poorly phrased sentence to have Andrew lashing out like a wounded animal. While a round of fisticuffs might satisfy the need for physical release, it would accomplish little else. Only more drastic measures would ease him completely.

Like finding Sophie and wringing her dainty, duplicitous neck.

"I went to your lodgings to see if you wanted to grab a drink. Apparently, you had already decided to do so. I must have missed the invitation," Simon said, indicating the nearly empty decanter with a flick of his wrist.

Andrew drew an unsteady breath in a concerted effort to keep his voice level. "Go home, Simon." Simon leaned back in his chair, folding his arms over his chest. "I have no wish to rehash the morning, least of all with you."

"And I have no intention of leaving you here alone," he said, signaling for a waiter. "So, I'm afraid you'll have to make do with my company."

"How may I be of service, my lord?" the wiry man asked, stopping two feet away from the table and leaning in to hear Simon's request.

"We need coffee. Strongest you have."

"Right away, my lord," he said, bowing quickly before scurrying away.

"As you are completely pissed, what you want is irrelevant. Take a look around you. Every man here is watching, eager to spread word of your reaction."

Andrew scowled, but couldn't stop a surreptitious glance at his surroundings. To his dismay, Simon was right. The patrons of White's might be feigning disinterest, but there was no doubt in his mind that they were watching his every move, noting every frown, every grumbled swear.

The waiter returned with two cups of steaming coffee and set them down on the table. Simon dismissed him with a nod. Andrew stared at the cup with disdain.

Eschewing his normal routine of adding extra sugar and milk, Andrew took a reluctant sip. His lip curled in distaste, even as the pungent flavor provided a physical connection with the bitterness inside him. For the space of several heartbeats, he felt a sense of calm. Then Simon spoke.

"I would have stopped her, had I known. Whatever reason she had for—"

Andrew's anger returned with a vengeance. "Don't you dare make excuses for her."