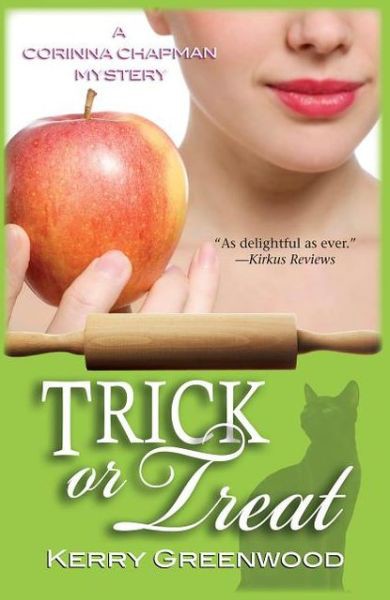 Praise for other Corinna Chapman mysteries

‘Full of great food, humour, magic and lust—not to mention a likable new sleuth, a lot of dead bodies and a spate of nasty little hate crimes.’—
Sun Herald

‘An appealing mix of humour, romance and tales of the seedy side of the city.’—
Sunday Times

‘A happy combination of the “chick-lit” genre and a tradi
tional cosy mystery story, redolent with the smells of good things in the oven.’—
Limelight

‘
Earthy Delights
is a pleasure to read—witty, surprising, and opinionated … there is corruption and violence... but there is also redemption, and compassion, and friendship, and courage, and humour. And good food. And lots of cats. If any of these appeal to you,
Earthly Delights
probably will, too.’—
Western Australian
K
ERRY
G
REENWOOD
is the author of forty novels and the editor of two collections. She is the author of the Phryne Fisher mysteries, as well as several books for young adults and the Delphic Women series.

When she is not writing she is an advocate in Magistrates’ Courts for the Legal Aid Commission. She is not married, has no children and lives with a registered Wizard.

Also in the Corinna Chapman series:

There is no love sincerer than the love of food.’ —George Bernard Shaw,

For my best friend ol’ pal ol’ buddy Themmy Gardner, that she should be proud of her ancestors.

With many, many thanks to the usual cast of people without whom I would write no books: David, Dennis, Jeannie, Themmy, Jen Pausacker, The Gen-X collective, Belladonna, Bron Gondwana, Eric the Fruitbat, Unique id, sesquipede
viant and catsidhe, who bear no resemblance to the Lone Gunmen for learned computer advice. Noga Nicholson for Hebrew and Samantha of Dragonfly for keeping me in writing trim. And for this book Greg Blunt, the Jewish Museum and various people who told me stories and who do not want to be named, but ought to be celebrated, which I have tried to do.

As far as I know, there is no bakery called Best Fresh, but if there is, it should be assured that this book does not refer to it. This is a work of fiction, and all things in it are fictitious. Even the City of Melbourne is an artefact of my imagination.

I’ll begin again. My name is Corinna Chapman and I am a baker, which means that in order to supply my shop, Earthly Delights, with bread to feed the suffering multitudes, I need to rise from my downy couch at four in the morning and get it all started. This has slightly soured my sweet nature, particularly this morning, because in that said downy couch reposed my dear and beautiful Daniel, a sabra of great gentleness and charm, and I could think of lots of things to be doing with him which did not involve ever leaving my bed.

But business is business, as my old mentor Papa Pagliacci used to say, and four am is four am and here I was, my appren
tice beside me, bringing the bakery to life. Coffee steamed in its pot. The dough hooks clicked, the mixers mixed and the scent of spices lay heavy around Jason, who was making a mix for the Welsh bread. For an ex-junkie he had filled out beautifully. His hair was thick and curly, like Harpo Marx, though confined severely for work under his white cap. His bones

were all decently covered now. His hands and arms were developing the baker’s muscles, sturdy, able to knead recalcitrant rye bread for fifteen minutes without a pause which might stiffen the dough. I was so proud of him. I looked away before he caught me staring at him. Jason embarrasses easily.

It was beginning to get light outside—what our ancestors used to call piccaninny daylight. Dreary and grey, but light.

I inspected the night’s massacre of vermin. Four mice and a rat. The rat was as big as a kitten. Erk. Much as I love most furry creatures, I have never been able to extend this affection to rats, though I am fond of mice and indeed used to have them as pets when I was a child. It’s something about the naked tails, I believe. I disposed of the corpses in the bin and opened the street door to allow Heckle and Jekyll, my Mouse Police, out into the lane. They were going to hunt down and kill the tuna scraps which either Kiko or Ian at the Japanese restaurant were happy to give them. They belted off in a blur of black and white in search of endangered species of the Southern Ocean in order to render them more gravely endangered. There was a rather endearing scamper of hard paws on the stone floor.

Then I heard someone singing. Not the usual type heard at this hour in Calico Alley. Drunks, these days, do not sing ‘Show me the way to go home’, a song made to be slurred. No, they sing ‘Heartbreak Hotel’. Almost invariably, in my experience. In a key of their own devising. And this wasn’t ‘Heartbreak Hotel’ or any Elvis number. I didn’t know it. But it was sweet and clear and I caught some unfamiliar words, ‘Wassail, wassail, all over the town...’ Then something about a ‘white maple tree’. I could not see the singer. He or she was up at the other end of Flinders Lane, near the newly opened (curse its blood) hot bread shop.

The voice ceased. Odd. But nice. I went back inside to work on the bara brith, contemplating the hot bread shop.

It’s not as though I have anything against the provision of new bread to the populace. The more fresh bread the better. Fewer polystyrene plastic-wrapped loaves means a better, more well nourished world. But did a hot bread shop, which was part of a chain and therefore able to keep its prices down, have to set up just along the street from me? Was there not enough of Melbourne, really quite a big city, for Best Fresh Bread to sell in that they had to come to my little corner? I felt like Eeyore talking about his sad and boggy place.
Locus tristis et palustris
, as the Professor would say.

Jason said, ‘I think that’s kneaded all right,’ and I realised that I had knocked down the poor Welsh bread practically to its component molecules. No one could say that it wasn’t worked enough. I set it aside to prove again, if the yeast had any breath left.

Jason delivered his report on Best Fresh’s bread. It was succinct. ‘It’s crap,’ he said.

‘You must be able to say more than that,’ I replied.

Well, that’s sixteen and male for you. I’d have to send a qualified appraiser to buy some for me.

The sun came up. The paper person flung the paper and missed killing anyone. I am sure that is his aim. He biked off, mumbling, ‘Foiled again!’ into his skimpy adolescent beard. Something huge loomed over me in the shadowy alley. A hand as big as a loaf reached for me.

But it was all right. It was Ma’ani, driver of the Soup Run bus, who oddly enough never has any trouble with rough behaviour on his shift. Even the wild boys instinctively know that it is better not to taunt someone who is over six feet in every dimension, especially across the shoulders. Those who don’t have the instinct speedily acquire it. I remember seeing Ma’ani pick up a brawling fighting-mad drunk by the waist and dip him head first into a city fountain until he calmed down. Which he did, really quite fast. Ma’ani had come for the bread which I donate every day to the Soup Run, which feeds the poor and homeless. Last shift. He swung the sack easily over his massive back and grinned, teeth white in the shadows.

‘You making a pick-up from Best Fresh?’ demanded Jason suspiciously.

‘That new place? Nah. They got a contract with a pig food manufacturer,’ he said. ‘Rather feed it to pigs than people. Sister was cross.’

‘I bet she was,’ I said appreciatively. Sister Mary is a diminutive nun with a will of adamant. If there is anything harder than adamant—it’s just diamond, isn’t it?—then she has a will of it. She would really not be impressed with Best Fresh deciding not to feed her lambs. In favour of pigs and further profit... ouch.

However, ours not to dwell on the discomfiture of others, ours to make more bread. The day was getting on and the coffee maker was getting into its stride. No coffee, no baking, is my equation. I need no funny drinks with ingredients which will be banned once Food and Health works out what they are. Just the aromatic bean, pure arabica, joy! I poured the sacred second cup which has to wait until all the mixers are mixing. Fragrant, hot and pure. Bliss.

Jason left to try to beat his record in scoffing the Trucker’s Special breakfast at Cafe Delicious, where the Pandamus family clean up betting on him. I sat down to listen to the bread rising, a small sound like a crinkle in the air. So soft that I could be imagining it. A sound that comes from a very long way away in time, when they discovered leavening in Ancient Egypt and the Pharaoh’s maidens sat down in a mud-brick kitchen and waited for the dough to rise, just as I was doing in my clean tiled bakery with the machines clicking. They would, however, have been drinking beer, not coffee. The other great gift of yeast.

‘Blessed be,’ said someone from the street door. Without turning round I knew it was Meroe, my friend and jobbing witch, as ‘blessed be’ is a Wicca greeting. Meroe came in. She is a thin woman with a sharply defined face and long black hair. She always wears black garments and a brightly coloured shawl or drape. Today’s was a length of sky-blue silk with fluffy white clouds on it. She was carrying a basket and offered me an apple. It was a shiny scarlet apple and all too, too Brothers Grimm for this early in the morning.

‘Will I go to sleep for a hundred years?’ I asked, taking it.

‘Probably not,’ she replied. ‘Anyway, it is too late for you, Corinna. You have already got your prince. Don’t be greedy.’

‘True, true,’ I said, and bit. It was a perfect apple, crisp and juicy and just tart enough. ‘And what can I offer you? Jason’s date and walnut muffins, just out of the oven? Bara brith in an hour or so, poppy seed rolls? Nice loaf of rye?’