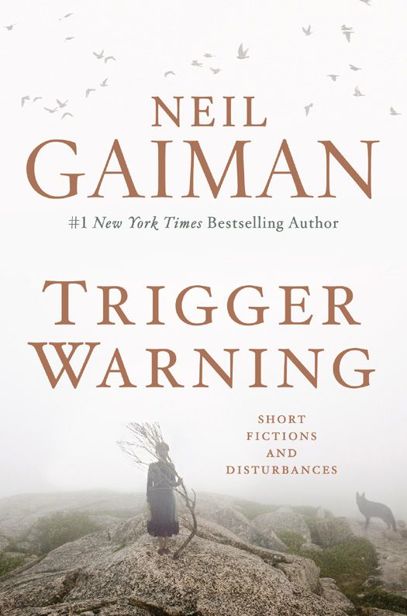 I’m not sure how I wound up with an honourable Hollywood agent who reads books for pleasure but I did, eighteen years ago. He’s still my agent, still honourable, and he still likes short stories best of all. This book of tales is for Jon Levin.

The Thing About Cassandra

Down to a Sunless Sea

A Calendar of Tales

The Case of Death and Honey

The Man Who Forgot Ray Bradbury

An Invocation of Incuriosity

Diamonds and Pearls: A Fairy Tale

The Return of the Thin White Duke

The Sleeper and the Spindle

I
NTRODUCTION
I. LITTLE TRIGGERS

There are things that upset us. That’s not quite what we’re talking about here, though. I’m thinking rather about those images or words or ideas that drop like trapdoors beneath us, throwing us out of our safe, sane world into a place much more dark and less welcoming. Our hearts skip a ratatat drumbeat in our chests, and we fight for breath. Blood retreats from our faces and our fingers, leaving us pale and gasping and shocked.

And what we learn about ourselves in those moments, where the trigger has been squeezed, is this: the past is not dead. There are things that wait for us, patiently, in the dark corridors of our lives. We think we have moved on, put them out of mind, left them to desiccate and shrivel and blow away; but we are wrong. They have been waiting there in the darkness, working out, practicing their most vicious blows, their sharp hard thoughtless punches into the gut, killing time until we came back that way.

The monsters in our cupboards and our minds are always there in the darkness, like mold beneath the floorboards and behind the
wallpaper, and there is so much darkness, an inexhaustible supply of darkness. The universe is amply supplied with night.

What do we need to be warned about? We each have our little triggers.

I first encountered the phrase
Trigger Warning
on the Internet, where it existed primarily to warn people of links to images or ideas that could upset them and trigger flashbacks or anxiety or terror, in order that the images or ideas could be filtered out of a feed, or that the person reading could be mentally prepared before encountering them.

I was fascinated when I learned that trigger warnings had crossed the divide from the Internet to the world of things you could touch. Several colleges, it was announced, were considering putting trigger warnings on works of literature, art or film, to warn students of what was waiting for them, an idea that I found myself simultaneously warming to (of course you want to let people who may be distressed know that this might distress them) while at the same time being deeply troubled by it: when I wrote
Sandman
and it was being published as a monthly comic, it had a warning on each issue, telling the world it was Suggested for Mature Readers, which I thought was wise. It told potential readers that this was not a children’s comic and it might contain images or ideas that could be troubling, and also suggests that if you are mature (whatever that happens to mean) you are on your own. As for what they would find that might disturb them, or shake them, or make them think something they had never thought before, I felt that that was their own lookout. We are mature, we decide what we read or do not read.

What we read as adults should be read, I think, with no warnings or alerts beyond, perhaps: enter at your own risk. We need to find out what fiction is, what it means, to us, an experience that is going to be unlike anyone else’s experience of the story.

We build the stories in our heads. We take words, and we give them power, and we look out through other eyes, and we see, and experience, what others see. I wonder,
Are fictions safe places
? And then I ask myself,
Should they be safe places
? There are stories I read as a child I wished, once I had read them, that I had never encountered, because I was not ready for them and they upset me: stories which contained helplessness, in which people were embarrassed, or mutilated, in which adults were made vulnerable and parents could be of no assistance. They troubled me and haunted my nightmares and my daydreams, worried and upset me on profound levels, but they also taught me that, if I was going to read fiction, sometimes I would only know what my comfort zone was by leaving it; and now, as an adult, I would not erase the experience of having read them if I could.

There are still things that profoundly upset me when I encounter them, whether it’s on the Web or the word or in the world. They never get easier, never stop my heart from trip-trapping, never let me escape, this time, unscathed. But they teach me things, and they open my eyes, and if they hurt, they hurt in ways that make me think and grow and change.

I wondered, reading about the college discussions, whether, one day, people would put a trigger warning on my fiction. I wondered whether or not they would be justified in doing it. And then I decided to do it first.

There are things in this book, as in life, that might upset you. There is death and pain in here, tears and discomfort, violence of all kinds, cruelty, even abuse. There is kindness, too, I hope, sometimes. Even a handful of happy endings. (Few stories end unhappily for all participants, after all.) And there’s more than that: I know a lady called Rocky who is triggered by tentacles, and who genuinely needs warnings for things that have tentacles in them, especially tentacles
with suckers, and who, confronted with an unexpected slice of squid or octopus, will dive, shaking, behind the nearest sofa. There is an enormous tentacle somewhere in these pages.

Many of these stories end badly for at least one of the people in them. Consider yourself warned.

Sometimes huge truths are uttered in unusual contexts. I fly too much, a concept and a sentence that would have been impossible for me to understand as a young man, when every plane journey was exciting and miraculous, when I would stare out of the window at the clouds below and imagine that they were a city, or a world, somewhere I could walk safely. Still, I find myself, at the start of each flight, meditating and pondering the wisdom offered by the flight attendants as if it were a koan or a tiny parable, or the high point of all wisdom.

This is what they say:

Secure your own mask before helping others.

And I think of us, all the people, and the masks we wear, the masks we hide behind and the masks that reveal. I imagine people pretending to be what they truly are, and discovering that other people are so much more and so much less than they imagined themselves to be or present themselves as. And then, I think about the need to help others, and how we mask ourselves to do it, and how unmasking makes us vulnerable . . .

We are all wearing masks. That is what makes us interesting.

These are stories about those masks, and the people we are underneath them.

I have friends who fulminate and bark and explode in frustration because people do not know the references, do not know what is being pointed at, have forgotten authors and stories and worlds. I tend to look at these things from another direction: I was once a blank piece of parchment too, waiting to be inscribed. I learned about things and people from stories, and I learned about other authors from stories.

Many, perhaps most, of the stories in this book are part of that same continuum. They exist because other authors, other voices, other minds, have existed. I hope you will not mind if, in this introduction, I take the opportunity to point you at some of the writers and places without whom these tales might not have ever seen the light.

III. THE LUCK OF THE DRAW

This is my third collection of short fiction, and I know just how lucky I am.

I grew up loving and respecting short stories. They seemed to me to be the purest and most perfect things people could make: not a word wasted, in the best of them. An author would wave her hand and suddenly there was a world, and people in it, and ideas. A beginning and a middle and an end that would take you across the universe and bring you back. I loved all kinds of short-story collections, from the anthologies of ghost and horror stories I’d pick up as a boy, to the single-author collections that would reshape the inside of my head.

My favorite collections would not just give me short stories but they would also tell me things I didn’t know, about the stories in the book and the craft of writing. I would respect authors who did not write an introduction, but I could not truly love them as I loved the authors who made me realize that each of the stories in the anthology was written, actually made up word by word and written down, by
someone human, who thought and breathed and walked and probably even sang in the shower, like me.

The wisdom in publishing is that short-story collections don’t sell. All too often short-story collections are viewed as vanity projects or are published by small presses, are not seen as real in the way that novels are real. Still, for me, the short stories are the places where I get to fly, to experiment, to play. I get to make mistakes and to go on small adventures, and there is something about the process of putting together a collection like this that is both scary and eye-opening: when I put stories together themes reoccur, reshape and become clear. I learn what I’ve been writing about for the previous decade.

I firmly believe that short-story collections should be the same sort of thing all the way through. They should not, hodgepodge and willy-nilly, assemble stories that were obviously not intended to sit between the same covers. They should not, in short, contain horror and ghost stories, science fiction and fairy tales, fabulism and poetry, all in the same place. They should be respectable.

This collection fails this test.

For this failure, as for so much, I request your indulgence and forgiveness, and hope only that somewhere in these pages you may encounter a story you might otherwise never have read. Look. Here is a very small one, waiting for you now:

There are animals that chase you down, run fast as the wind, tirelessly, to sink their fangs into you, to drag you down. The Shadder do not chase. They simply go to the place where you will be, when the chase is over, and they wait for you there, somewhere dark and indeterminate. They find the last place you would look, and abide there, as long as they need to abide, until it becomes the last place that you look and you see them.

Hiding Pandora by Mercy Amare
Kismet (Beyond the Bedroom Series) by Pittman, Raynesha, Randolph, Brandie
When He Cheatin' and You Still Love Him by Cachet
The Savage Trail by Jory Sherman
Dreamwood by Heather Mackey
Never Let Go by Sherryl Woods
The Hunger by Lincoln Townley
Murder Most Mellow (A Kate Jasper Mystery) by Girdner, Jaqueline
Jace by T.A. Grey
Blind Man's Alley by Justin Peacock