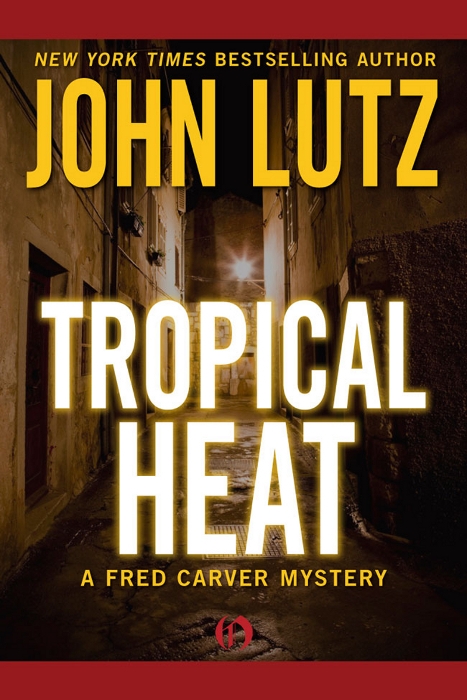 A Biography of John Lutz

When love’s well-timed ’tis not a fault to love;

The strong, the brave, the virtuous, and the wise,

Sink in the soft captivity together.

A
CANE WAS NO
good for walking on sand. It penetrated to different levels and caused tentativeness. When Carver got to within a hundred feet of the surf, the cane’s tip made soft sucking sounds and water appeared in the round holes it left in the sand. A shallow, curved depression shaped like a comma angled forward from each hole, from where Carver levered the cane ahead of him to support his weight for his next step.

He was beyond the sloping narrow finger of land that jutted toward the sea, blocking vision from the north and making his section of beach usually more or less private. Now he could see about a dozen sunbathers lounging along the beach. Carver reached the surf and used the cane for support to lower himself awkwardly to a sitting position. He glanced to his right along the arc of pale sand and array of tanned bodies. There were more people than usual at the beach that day, worshiping a tropical sun that was as fierce and uncompromising as it had been when paid homage as an ancient god. It was odd how the sea’s bright edge drew people, Carver mused. It called to them, as it had called to him after his injury.

He sat for a while on the beach, feeling the cold water lap at his bare lower legs, while the late morning sun heated up his face and chest. The sky was clear that day, and the Atlantic was very blue and calm, sporting no whitecaps until it rolled in near the shore and curled forward to break into foam and run gently up onto the beach. A large ship, a tanker, was visible far offshore; nearer in, but still far away, a few white fishing boats bobbed. From off to his right Carver could hear the distant voices of children playing a running game on the beach: a shout, then shrill, uncontrolled laughter. Carver wondered how it would feel to laugh with that kind of abandon. The north beach, to his left, was too rocky for sunbathers or swimmers and was deserted. The breaking sea was noisier from that direction.

He waited for a particularly large swell and timed it right. Before the wave broke onto the beach, Carver tossed the cane back a few feet, leaned to his right, turned over, and used his arms and good leg to propel himself toward the onrushing surf. He grunted and slithered backward on his chest and stomach into the wave, seeking its depths, so that when it withdrew from the shore with its tons of reversed momentum, it would pull him with it toward the sea. The maneuver always reminded Carver of evolution in reverse.

The wave claimed him and carried him into shallow water over a hundred feet from shore. His stiff leg didn’t matter so much now; he could stand up and lurch forward into the oncoming swells, using the pressure of his palms against the water to help support his body, which was so much lighter when partially submerged. He continued moving toward the open sea, toward its vast implacability and peace. Sometimes he wondered what it would be like to keep moving in that direction, toward oblivion. But he didn’t dwell on the idea. He didn’t think of himself as the suicidal type. In fact, he considered himself to be just the opposite; a survivor, that was Carver. Because he could do whatever was necessary. He’d proved it more than a few times. He was proving it now. Every day.

For an instant he thought of Laura. But only for an instant. He diverted his mind from Laura in the same way he did from the vast magnetism of the ocean’s horizon.

In deeper water, when he began to swim, the stiff leg didn’t matter at all.

It was why he loved the sea.

This was his therapy. Here, he thought, kicking easily from the hips and stroking parallel to the shore, he was as mobile as the next person. And with his increased lung capacity and his long, powerful arms, he was faster and stronger than most.

He stroked harder, reached out farther, rotating his head rhythmically to the left to breathe, in a smooth Australian crawl, and veered east against the swells. Carver had been swimming off the shore there every morning for the past two months; he knew exactly how far out to go before turning back.

When he felt the strain on his thighs and arms, and the dull ache pulsing deep in his chest, he rolled onto his back and floated for several minutes, his eyes closed to the hot, bright sun. It felt good to be tired and winded, exhausted but all the way alive. This was his moment, his fought-for measure of contentment.

The distant feminine voice pierced his consciousness like a sharp, thin wire. He rolled over and began treading water.

A woman was standing on the beach, his beach, calling to him. She must have known it was him because of the cane on the sand, and because there was no other swimmer in sight. Despite the heat, she was dressed in dark clothing, what appeared to be a matching skirt and blazer. Poised with her hands on her hips, she was staring out at him in a patient, waiting attitude.

Carver didn’t feel like talking to anyone. He rolled onto his back again and continued floating, hoping the woman would take the hint and leave.

She didn’t seem to think he’d heard her.

“Mr. Carver! . . .” He opened one eye. She was waving now, with a kind of relentless desperation. She would not go away, maybe ever. Carver sighed, cursed, and stroked toward shore.

When he got in close enough to walk, he saw her more clearly. She was slender, not very tall, with long dark hair. Her clothes belonged in an office, not on the beach. Dark gray suit, white ruffled blouse, dark high heels. Ms. Efficiency. What could she want here? Was she going to proposition him for sex? Serve him a subpoena? Collect for the March of Dimes? He hoped it was the March of Dimes.

Carver’s walk became a crawl. Gravity was doing him dirty again. When a larger breaker roared in, he let it carry him farther toward shore, then he crawled and slithered up onto the beach, feeling embarrassed in front of the woman, resenting her intrusion all the more for it.

She bent down and handed him his cane. He didn’t thank her. He sat on the beach, breathing hard, bent slightly at the waist with his good leg straight out in front of him, his other crooked up at the knee. She was good at waiting; now that she’d landed him, she didn’t try to talk to him until he’d caught his breath.

“Unfortunately,” Carver said. He rolled to his side, worked his good knee under him, then levered himself to his feet with the cane. This time the woman didn’t move to help him. He liked that. “Bum leg,” he explained.

“I know. Lieutenant Desoto told me. I’m sorry about your knee.”

“Alfonso Desoto sent you to see me?”

“That’s right.” She gazed out over the ocean. “Do you swim for therapy?”

“Every morning,” Carver said. “It helps fight off atrophy.”

He didn’t answer. Didn’t smile, didn’t frown. Let her wonder. He was wondering.

“Are you finished swimming?” she asked.

“Then sit back down, please; we can talk here.”

Carver lowered himself back into a sitting position. He was getting tired of standing and was glad she’d suggested this. She stooped down to be at eye level with him, settling back on her high heels, her dark skirt stretched tautly across her thighs and rounded hips. He kept his eyes averted from her pelvis and looked closely at her face. Her features were too vividly sculptured to be called “pretty”; “beautiful” fit okay, and yet she really wasn’t. There seemed to be an arrogance in the upward tilt of her smooth chin, the directness of her clear grayish eyes. But Carver noticed that she gave the impression of arrogance only at first glance; what there really was about her was an intenseness that had molded her features into a mask.

“My name’s Edwina Talbot,” she said.

“Why did Lieutenant Desoto send you to see me, Edwina?”

“Because I was pestering him. And because he thinks you need something to do.”

“Doesn’t he know I’m independently wealthy now?” Carver said. He’d received a fat insurance claim along with his disability pension after being shot in the left knee during a holdup six months earlier, when he was a detective sergeant in the Orlando Police Department. The knee was ruined, locked at a thirty-degree angle for life. Eighty thousand dollars and a pension wasn’t much compared to being able to walk without a cane. Not the jackpot some of the damned fools in the department actually congratulated him on. Carver didn’t feel lucky.

“Being wealthy isn’t the same as having something to do,” Edwina said.

“Being wealthy isn’t the same as what I am, either.”

“I’m not financially fixed for life, Edwina, unless I wean myself from food.”

“Then that’s probably another reason Lieutenant Desoto sent me here. He said you were a private investigator now. I want to hire you. I want you to find someone.”

Carver decided to be honest with her. Besides, he wasn’t sure if he wanted to take on a job just yet. It might be better to hang around there, work on the leg, learn to move as well as possible with what the doctors had left him. “I’m a one-man business,” he said. “Larger agencies with more resources are better able to trace missing persons.”

“I don’t trust larger agencies. Desoto says I can trust you.”

“That means something only if you know you can trust Desoto. Who do you want found?”

“You’ve been to the police, obviously,” Carver said. “They’re good at what they do. Why can’t they find Willis Davis?”

“They don’t think he’s missing; they think Willis is dead.”

Carver looked closely at her. It was strange how her angular face seemed so tranquil yet contained such quiet force. “If they think Willis is dead, they must have their reasons.”

“If I think he’s alive, I must have mine. Want to hear them?”

Carver looked away from her, back out to sea. Desoto was right; he did need something to do. His last case, an industrial espionage matter that had led to the computer operator everyone, even the computers, suspected, had been over a month ago. He’d been loafing since. That was no way to nurture a business, or a sense of accomplishment. His energy had been building rapidly for the past several weeks; he felt frustrated, trapped by his immobility. He’d even occasionally found himself feeling sorry for the new, lame Fred Carver. He didn’t like himself very much when that happened.

“I’ll listen,” he said. “I won’t promise to do anything else. Not even to commiserate with you.”

She smiled thinly. It was a weary sort of smile, but not at all resigned. It suggested that she had reserves of strength, yet at the same time an odd vulnerability. “Sure,” she said, “you can’t know what to do until you’ve listened to what I have to say.” There was an edge of sarcasm in her voice, as if she knew he’d already decided to help her and she was humoring him.

She watched him as he planted the cane in the soft sand and pulled himself to his feet. Again she made no move to help. She had him figured out by now.