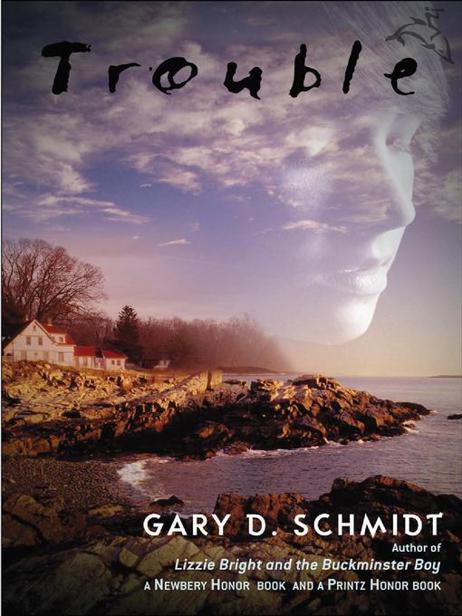 The text was set in 12-point Horley Old Style.

For Marjorie Naughton,
with a grateful heart

H
ENRY
S
MITH'S FATHER
told him that if you build your house far enough away from Trouble, then Trouble will never find you.

So the Smiths lived where their people had lived for exactly three hundred years, far away from Trouble, in Blythbury-by-the-Sea, where the currents of the Atlantic give up their last southern warmth to the coast of Massachusetts before they head to the cold granite shores of Maine. From the casement windows of his bedroom, Henry could look out over the feathery waves, and on sunny days—and it seemed as if all his life there had been only sunny days—he could open the leaded-glass doors and walk onto a stone balcony and the water would glitter all the way to the horizon. Henry's first word had been "blue." The first taste he could remember was saltwater. The first Christmas gift that meant anything to him was a kayak, which he had taken into the water that very morning, so calm had the sea been, because Trouble was so far away.

Henry Smith's house, begun in 1678 with the coinage of his seventeenth-century merchant ancestors, stood on stone ledges, braced against the storms and squalls and hurricanes and blizzards that blew out of the northeast. Its beams were still as straight as the day they had been hewn, and Henry could run his hands along the great oaks that dwelled beneath the flooring and feel the sharp edges left by the ancient maul strokes. The house had been changed and added to and changed again for a century and a half, so that now, under a roof of dark and heavy slate, three staircases wound to the second and third floors, and a fourth climbed up until it struck a wall whose ancient framing only suggested the doorway that had once been there. The house's eight fireplaces were each big enough to stand in, and one had a hidey-hole that huddled beside the hearth and was guarded by a secret panel in the wood closet. Henry and his brother, Franklin, and his sister, Louisa, would hide in it during the winter, because it was always warm. The floors of the house were wide pine downstairs, wider oak upstairs, quarried stone in the kitchen and the end-rooms behind it, and Italian ochre tile in the parlors.

The north parlor held lacquered Asian furniture brought back from Hong Kong and Singapore aboard nineteenth-century steamers. The south parlor showed the French Impressionist collection, including two Van Goghs and a small Renoir. The downstairs hall was an armory of Revolutionary War flintlocks that the Blythbury-by-the-Sea Historical Society borrowed for exhibitions on the Fourth of July because they still fired. The library held two shelves of medieval prayer books whose gold-and-red
ad usums
flashed as if they had just been scripted beneath the stern and glowing icons hanging on the dark paneling. Henry and his father would sometimes read them—"for the use of" this abbey, "for the use of" this monastery, "for the use of" this court—and then look out toward a gold-and-red sunset. "This house will stand until the Apocalypse," Henry's father would say reverently.

Blythbury-by-the-Sea had grown up slowly around the Smith house. Now it was the kind of town where no one who lived there, worked there. Weekdays, the dark suits commuted in sleek foreign cars to downtown Boston—Henry's father drove to a prestigious and well-regarded accountancy firm where he was a partner—and then the suits came back at suppertime, glad to have escaped the noisy crowd of the city. On Sundays, Henry's family went to St. Anne's Episcopal Church—where their family had owned a pew since 1680—and in the afternoons, they took long walks beneath the broad maples of Townshend Park, or drove up to New Hampshire to buy maple syrup, or if the weather was warm, they climbed down into Salvage Cove, the long stretch of perfect white sand and huge black boulders below their house. Local guidebooks called it the finest private beach on the North Shore. Looking at the shore from the library windows, Henry agreed.

On Monday mornings, Franklin and Louisa drove early to Henry Wadsworth Longfellow Preparatory High School—where no one wore uniforms. Thirty minutes later, Henry's parents drove him to the John Greenleaf Whittier Academy—where all seventh- and eighth-grade students wore uniforms involving a white shirt, blue blazer, red-and-white tie (the school colors), khaki pants, black socks, black loafers, and—no kidding—red-and-white boxers. Longfellow Prep and Whittier Academy were both old schools, made of burnt brick and filled with kids whose names were so Anglo-Saxon that King Richard the Lion-Hearted would have recognized them all. In the fall, they played rugby; in the spring, they rowed crew.

No one was surprised that Henry, who was one of the smaller rugby players, liked spring a whole lot better than fall—especially since he could never hope to match the records that Franklin—Franklin Smith, O Franklin Smith, the great lord of us all, Franklin Smith—had put up on the wooden Athletic Records panels for his rugby play.

Which Franklin reminded Henry of whenever he chose to notice him.

Blythbury-by-the-Sea was the kind of town where oaks and maples shaded quiet clapboard and brick and stone houses that had seen a whole lot of New England winters and were doing fine, thank you. Tight and prim, their windows presided over Main Street, whose two narrow lanes meandered into the town center, where tourists up from Boston and New York came to visit boutiques and rare-book shops and antique stores and fancy-jewelry artisans and gourmet delis. Occasionally, one of the town's two policemen would stroll past the boutiques and delis, sometimes stopping to pick up a bit of litter that someone from out of town had dropped.

Which is about the most they did in a day, because Blythbury-by-the-Sea was a town that Trouble could not find.

This is not to say that Trouble didn't try.

An autumn ago, Franklin had sprained his ankle so badly in rugby practice that he wasn't able to play in the Eastern Regionals. The entire student body of Longfellow Prep went into mourning. The sprain was so severe that Franklin couldn't even drive, so Mrs. Smith drove him and Louisa to school. Everyone at Longfellow Prep thought that Mrs. Smith drove because Louisa—who did have her driver's license, after all—was distraught about Franklin and the Eastern Regionals. But, really, it was because Louisa was a terrible, awful driver who panicked at stop signs, stoplights, and crosswalks. Mr. Smith said that she should never be allowed behind the wheel of the BMW—never mind the Fiat!

There had been four trips to Massachusetts General Hospital in Boston over Franklin's ankle, and the doctors had warned that the sprain meant that he might walk with a pronounced limp for quite some time. Still, Franklin rode the team bus down to Foxboro and crutched his way over to the course to watch Louisa run in her third State cross-country finals—and take first, even though she was still only a junior. And he drove in the Academy bus to Henry's rugby Districts in Deerfield, where Franklin was lauded as the star alumnus that he was, and where Whittier was whipped by Kenilworth with a score that Henry tried to forget but that Franklin wouldn't let him. By Thanksgiving, Franklin had decided to discard his crutches. By Christmas, no one who didn't know about the sprain would have noticed a limp. By the first January thaw, he was again running five miles a day, and people who lived in the clapboard and brick and stone houses clapped when he went by.

And Longfellow Prep won the Eastern Regionals, after all—which Franklin was mostly happy about.

At dinner that night, Franklin said that he guessed he should teach Henry how to climb. He'd show him how to set his hands and balance his footing. He'd show him how to test rock holds and how to use his fist as an anchor in a fissure. And maybe, if he got good enough, he'd take him up to Katahdin. Maybe they'd even climb through the Gateway and up to the Knife Edge. "That would be something to see, little brother," he'd said, and he'd reached over and rumpled Henry's hair.

Henry almost bowed down and did worship.

And Henry's father said again, "If you build your house far enough away from Trouble, then Trouble will never find you."

That was why Henry wasn't ready for it on the evening of his fourteenth birthday, while he adjusted the straps of the backpack his parents had given him so he could show Franklin how prepared he was for their hiking trip up Katahdin, because Franklin had finally, finally,
finally
agreed to take him, even though he told Henry that he'd never make it, that he'd have to quit halfway up the mountain, that they'd have to turn back, that he was only going because their father wanted him to take his little brother—who, Franklin said again, would never make it.

On that night, looking out the north parlor window, his parents standing beside him and holding back the curtains, Henry couldn't understand why the town's one patrol car was moving slowly down their drive, heading toward their house. It had been a spring colder than usual, and the trees were still unleafed, so they could see the patrol car's red light revolving and throwing fire onto the mostly bare oaks and maples. They walked out into the dark back gardens, dark because the moon was still not up and the sky was starless. The red light struck them full, so that when Henry looked up at his parents' faces, they were covered with blood.

Which is how he saw his brother's face when they reached the hospital.

The streaks of red were ghastly against his skin, which was stark white. The perfect tan that Franklin always carried had vanished and left behind this shocked pallor. Henry's mother stood at the foot of the bed, her hands tight on the aluminum rail, her eyes wide and unblinking. His father stood beside her, stiff, straight, his hands up to his face. Neither had taken their coats off. Neither spoke.

A dribble of saliva came from underneath the mask over Franklin's mouth. Henry reached to wipe it away.

"Don't touch that," said his father.

His mother began to moan quietly.

Henry sat on his brother's bed for a long time that night, as his parents came in and went out and came in and went out. There were the doctors to deal with and medical decisions to be made: "Another brain scan once he's stable," said Dr. Burton. "Relieve some of the pressure, and then assess the damage," said Dr. Giles. There were the two town policemen, who came to inform the Smiths officially that they had arrested the driver who had slammed into their jogging son.

There was Father Brewood, who knew enough to say nothing but a prayer. And there was the reporter from the
Blythbury-by-
the-Sea Chronicle,
who sensed that he might have a story with more drama than a rugby score and sneaked into Franklin's room to get a quick picture of him before the two Blythbury-by-the-Sea policemen manhandled him onto an elevator.