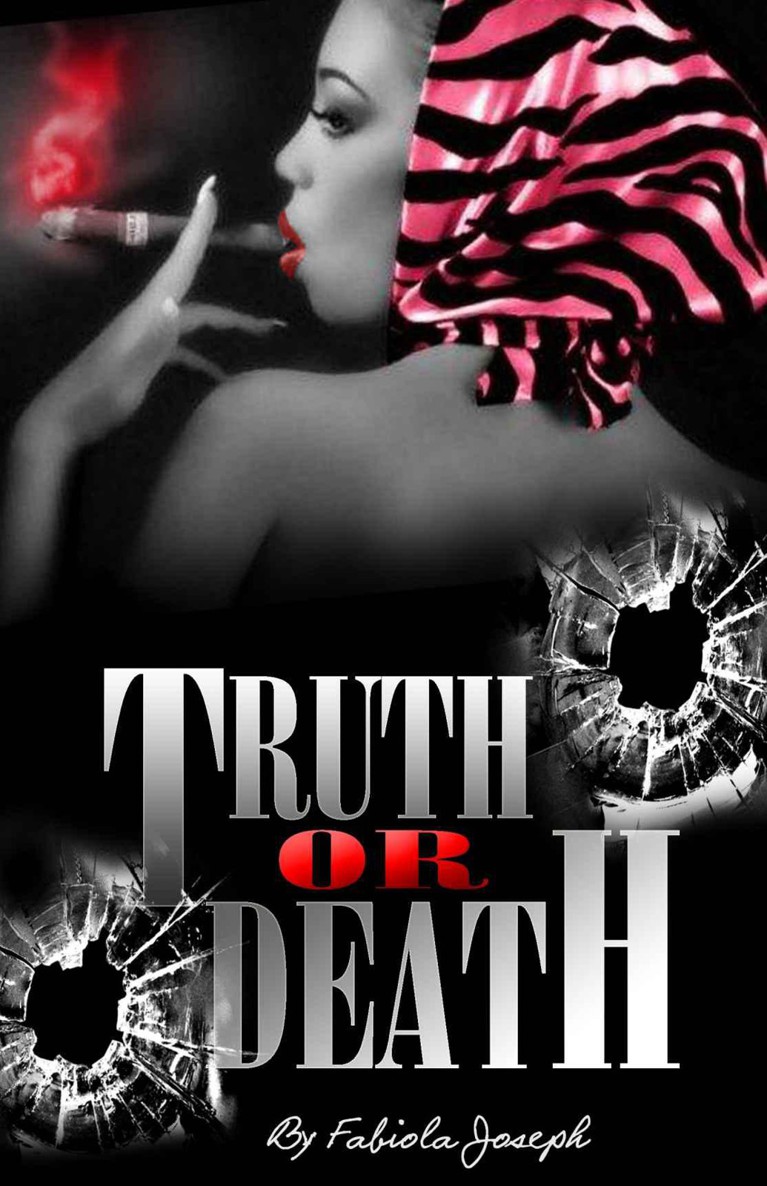 This book is an original idea written
by
Fabiola. Joseph. It is a work of fiction. Names, places, and incidents are the product of the author’s imagination and are used
fictitiously. No parts of this book shall be duplicated, reproduced, or shared without the writer’s permission, unless for promotional purposes. By reading this book, you are agreeing to such terms. Any resemblance to any person dead or alive, place or actual events is purely coincidental.

Written and created by FABIOLA JOSEPH

He thought that he was going to be the one to drag her to his mental hell, but she already had a one-way ticket. If everything went as planned, she would be leaving sanity behind and crossing the gates of madness willingly.

Blinded to the fact!

She was early as always. The reverend could smell the smoke that was coming from the waiting room. He shook his head as he left his desk and opened his office door.

“Annabelle, how many times do I have to tell you that you can’t smoke in my office?”

Annabelle looked at the reverend, smiled, and took another puff from her cigarette. It tickled her pink that she was annoying Reverend Bell. She waited for him to walk over to her with a cup of water as he always did. She just wanted to get him riled up before their session.

“Come on, Rev, a little smoke never hurt anybody, has it?”

Annabelle knew the answer to that question, but wanted to be a smart ass. Once the reverend held out the cup, she took a long drag, blew the smoke in his face, and put it out.

Once in his office, she walked around touching everything she could get her hands on. She was like a big kid, unable to sit still, unable to act like the 23 year old adult she was. At times, he would look at the young girl and wonder what it was that her boyfriend saw in her. He would never be able to deal with her childish antics. There was no way, but then, he would really look at her. She was beautiful. Her beauty put her youth on display. Her skin was tight, flawless. Her wild hair showed her mixed background and her features were just as mixed up as her heritage. She had wide almond eyes, a small button nose, full lips, and somehow, it all seemed to work. At times, Reverend Bell would have to catch himself as his eyes roamed her body. She was a tall, slim girl with everything on her body being the perfect size. Nothing too big, nothing too small. He would get lost in thoughts of her body before his wife and their relationship, or lack thereof, crept in.

He would try his best to ignore her, but she tried even harder to keep his attention. So many times he would pray that her boyfriend, who always seemed to be late, would hurry up. That day, he showed up 15 minutes late, which was early for him and they all got straight to it.

“How have things been since our last visit?” the reverend asked as he looked from Annabelle to Jacob. Jacob was well dressed as always, donning a suit and tie. He was much older than her, about 15 years or so.

“She’s still throwing her temper tantrums, Rev. She knows that shit drives me crazy. Before I entered into this relationship, I told her that her age could not be a factor.”

“This isn’t the first time that you have brought up her age, Jacob. Can you tell her why you think her age affects this relationship?

Reverend Bell took in a deep breath. He wanted so badly to stand up, look Jacob straight in the eye and tell him to leave the young girl alone. It was clear that they didn’t belong together. It was clear that Jacob was with her for the very reasons the reverend lusted over her.

“What’s the point? She will just ignore my warnings. To tell you the truth, I’m not sure how much of this I can take.”

Reverend Bell was shocked. Although Jacob bitched about Annabelle’s actions, he never once threatened to leave the relationship. The reverend sat up and waited to see how this all would play out.

“Oh, really?” Annabelle asked as she stood up and threw her hands on her hips.

“You think that you could just walk away from this, from me, from all that I do to you, from all that I give you?” She turned to Jacob and stared at him straight on. She walked up to him, slid on his lap and straddled him. The reverend watched as she shifted around on his lap, trying to feel what she knew would be growing in Jacob’s pants, no doubt.

“Jacob, I love you and you love me. More importantly, you love every bit of what I do to you. The hissy-fits, the pouting, the tantrums, they all lead to the prize. The prize being sex after I make you so upset, isn’t that right?”

Reverend Bell watched as Jacob took in a deep breath. He reached up, loosened his tie and swallowed hard. Annabelle was just that type of creature. Beautiful, sexy, and seemingly dangerous. She had a wild side that spilled through her outer shell and hung in the air. Every whiff of her left both men and women mesmerized.

Annabelle rocked her hips as she spoke. The reverend found her actions inappropriate, not only because he was a man of the cloth, but because no man would be able to give a true answer with her on top of him. Yet, he was intrigued. This young girl was a force to be reckoned with. He wondered if Jacob could really handle her. There he was thinking that she was too young minded yet, with just a sway of her hips, she had him hypnotized.

Annabelle leaned in, gave Jacob a kiss that looked like it was worth a million dollars, and finally, took her seat.

The session was useless after that point. As the reverend asked his questions, Annabelle distracted Jacob with kisses and touches, and he let her. After twenty minutes of their PDA, Reverend Bell had enough.

“How about we wrap this up?” Neither Annabelle nor Jacob objected. They made their way to the waiting room where Jacob paid cash for his session, as he always did. The reverend did find that weird. Not too many people did that. They would at least use a credit card. Reverend Bell wondered if he had anything to hide, although he seemed like an open book.

Love The Way You Lie

After a short ride, Jacob found himself in Annabelle’s apartment. He knew the minute she straddled him that his lunch break would take longer than usual. As they bumped into the walls and left a trail of clothes behind, she asked him, “You don’t ever think that you could leave me, do you?”

Jacob tried to kiss her, but she pulled away and waited for his answer. “Not now, baby, come on, not now.” Again, Jacob leaned in to taste her lips, but she pushed him away roughly.

“TELL ME, TELL ME THAT YOU WILL NEVER LEAVE ME.”

“You know that I love you, Bella. Come here; let me show you how much.”

She let Jacob pull her close, but still would not let him touch her. Instead, she entered her bedroom with him trailing close behind. She pushed him on the bed, her with just her skirt on and him in just his slacks and shoes. As he lay back on his elbows, she made him watch. Annabelle was well aware of the power she held. Her beauty had always been her crutch. Beauty in the right hands was like having a key that opened every lock in the world. People were always nicer, they were always more eager to please. If they didn’t want her, they wanted to be her.

Annabelle knew that men couldn’t
resist her and now that she had found the man of her dreams, she wanted to make sure that she would never lose him. Jacob had everything she had ever wanted and he was to be hers, forever. Her stockings were the last to go. She took them off slowly, one leg at a time. Jacob licked his
lips and he thought about the wetness between her thighs… and she noticed. Once completely naked, she walked over to her radio and turned it on. The CD she wanted was already in there. She went straight to number five. As Alice Smith sang the words, “My darling…” from her song The One, Annabelle began to dance. She danced her way to the bed and got on top of it. With Jacob between her legs, she danced to the beat of a desperate lover.

She needed him as badly as he wanted her, each for their own selfish reasons. With each grinding motion of her hips, Jacob fulfilled her request to profess his undying love.

“Bella, you know that you are the only one for me.” Satisfied with his answer, Annabelle dropped her body onto his and made sweet love to Jacob. She kissed his lips softly, she touched every one of his sweet spots, and she gave him her all. He was hers and she made sure that she fucked him like he would always be hers, just hers.

Jacob and Annabelle spent 45 minutes devouring one another. After, they relaxed in bed as Jacob planned his exit. Leaving her wasn’t always easy, not that he thought it would ever be. Lost in his thoughts, Jacob didn’t hear Annabelle's question.

“Are you listening to me, Jacob?”

Snapped out of his thoughts, Jacob sat up. “What time is it?” Jacob asked as he slid off the bed. “They are going to kill me for taking such a long break.” As he got dressed, Jacob received a text. He picked up his phone and his eyes widened. He hurriedly got dressed as the text engulfed his brain causing him to tune Annabelle out.

Annabelle didn’t get a chance to say anything else. Jacob hurried out of her room and out of her front door as soon as he got his clothes on. Normally, Annabelle would have given him hell, but her thoughts were on the night to come. It was rare that she got to spend time with Jacob at night. He was always working late or taking some client out for dinner. As soon as he left, she showered and started planning their night.

Everything was ready. The steaks would not be cooked until Jacob arrived. The champagne was chilling, the lights were low, and Anita Baker played in the background. She was Jacob’s favorite and had grown on Annabelle. That’s one thing she could credit Jacob for. He took her out of a world that was filled with only rappers and introduced her to jazz, blues, and acid jazz. Her palate had evolved when it came to music and he was teaching her so much more. It was after seven. She told Jacob to be there by 6:30, but he was always late. Annabelle enjoyed another glass of red wine as she waited.