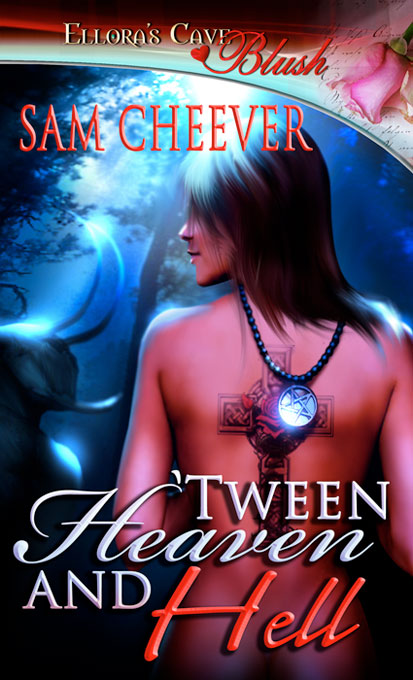 The terms Romantica® and Quickies® are
registered trademarks of Ellora’s Cave Publishing.

With the exception of quotes used in reviews, this book may not
be reproduced or used in whole or in part by any means existing without written
permission from the publisher, Ellora’s Cave Publishing Inc., 1056 Home Avenue,
Akron, OH 44310-3502.

Warning: The unauthorized reproduction or
distribution of this copyrighted work is illegal. No part of this book may be
scanned, uploaded or distributed via the Internet or any other means,
electronic or print, without the publisher’s permission. Criminal copyright
infringement, including infringement without monetary gain, is investigated by
the FBI and is punishable by up to 5 years in federal prison and a fine of
$250,000.  (http://www.fbi.gov/ipr/). Please purchase only authorized
electronic or print editions and do not participate in or encourage the
electronic piracy of copyrighted material. Your support of the author’s rights
is appreciated.

This book is a work of fiction and any resemblance to persons,
living or dead, or places, events or locales is purely coincidental. The
characters are productions of the authors’ imagination and used fictitiously.

The author acknowledges the trademarked status and trademark
owners of the following wordmarks mentioned in this work of fiction:

’Tween Heaven and Hell the spirits dwell and ply their
various trades.

’Tween Heaven and Hell the spirits play and dance their
dance of death.

’Tween Heaven and Hell the Devil smiles and inhales your
last breath.

’Tween Heaven and Hell the spirits dwell and ply their
various trades.

Sometime around 2060, the world went to war again and opened
up a whole new can of worms. Up until then humans thought they had it pretty
rough on this Earth, with poverty, crime, disease, your everyday evil forces
and the general disintegration of morality.

However when the laser guns and plasma bombs finished
smashing a geographic area comprising about seventy percent of the surface of
the Earth into smithereens, something eminently evil used the resulting chaos
to slither its way into the world. This evil something hadn’t been seen before
by human eyes, but had always been there, in a parallel dimension, watching the
show and waiting for its turn to join in the fun. And every once in a while,
when Earth’s defenses were particularly low, this something would reach across
that barrier and tweak us a little. Which explains things like Hitler,
fruitcake and the IRS.

Devils and demons were never meant to walk among us. But
once they had found a way to get through, God had no choice but to send his
angels in to keep an eye on them. Several minor skirmishes have already been
fought between the forces of good and evil, since that time thirty years ago
when the first devil snuck through Earth’s defenses. The angels, with the Big
Guy at their backs, are winning the battles so far, but the outcome of the war
is still uncertain.

About ten years ago God started using Tweeners to help the
good side out. The only problem with Tweeners is that, by their very makeup
they are some portion devil. That’s why they understand and know how to defeat
the forces of evil. But it is also what has made them a little bit
unpredictable to the good guys.

What exactly is a Tweener you ask? A Tweener is a non-human.
They have neither wings nor horns, but generally have both angel and devil in
their family forests. Which is probably why they enjoy a higher sensitivity to
spectral influence than regular human people.

My name is Astra Q. Phelps. Don’t ask me what the Q stands
for because that little piece of info will go with me to the crematorium. I’ve
had all printed documentation of the name destroyed and though a lot of my
enemies have tried to dig it out, no one will ever know what it stands for. A
girl has to have some secrets. Especially when the truth would cause her some
serious embarrassment.

I run a business called the Angel Network, which is the only
devil and demon locating and destroying business in the universe. In other
words, I kick serious evil butt for a living. I am a Tweener. But I digress.
You were interested in my story weren’t you? Well here we go.

God, in his wisdom, sent us his angels, to whisper our
names on the wind.

God, in his anger, released his devils, to pester our
souls to the end.

I mentally cursed myself and forced my mind back to the
present. My mind always wanders during training. Especially when my training
partner is Emo, my long time partner and fellow perfectionist in thuggery. Like
me, Emo takes our little training sessions very seriously. Unlike me however,
Emo doesn’t have any trouble concentrating on what he’s doing. I have a lot of
trouble concentrating unless my life is in peril. Which certainly happens often
enough, since I make my living hunting devils and demons.

Closing off my wayward thoughts, I cocked my head and tried
to focus all of my energies into sensing Emo in the pitch-black space. I heard
tiny pattering feet to the left, skittering along the wall that stretched
across my back. My head swiveled just in time to spot the shimmering red aura
of a large, black rat that was returning to his den with a tiny chunk of bread.
I watched him closely to make sure he didn’t even think about coming my way. I
really hate rats.

When the rat was safely tucked into his little rat shack in
the wall, I made a conscious effort to refocus my attention to the task at
hand. I took a deep breath, tilted my head back and expanded my nostrils to
scent Emo, but he was apparently using his masking power and I couldn’t get a
fix on him.

Unfortunately, I did get a pretty good whiff of the Chinese
takeout place on the corner up the street and I suddenly remembered that I
hadn’t eaten any lunch and it was well past dinnertime. I closed my eyes and
took a deep cleansing breath, shaking my head in an effort to regain my
concentration. I focused on sensitizing my power to overcome the block Emo was
apparently using. My power slid around the room, searching, but not finding my
skulking partner. I clutched the object I held in my hand a little more tightly
as my nose began to tingle and the skin on my back started to crawl.

I suddenly realized there was something standing just behind
me. I jerked my head around but it was too late. A big, leathery paw with long,
sharp claws clamped itself around my upper arm and tore me off my feet.

Realizing too late that I’d allowed him to sneak up on me, I
used the momentum of his attack to turn my body so that I faced the wall. Then
I pushed my feet into the wall and launched myself backward, flipping over his
head and landing on the balls of my feet a couple of feet behind him. He turned
with a snarl and dove toward my legs, tackling me to the ground and covering me
with his thick, solid body. The wind left me in a rush but I managed to jam my
knee deeply into the spot between his legs where he would least like me to
wedge my bony limb. He growled as I connected with something squishy and heavy
and one of his club-like arms jerked toward the ceiling and started to come
down toward my head. It stopped in midair as I pushed the object I held in my
hand into the middle of his chest. The object gave off burning sparks as it hit
his leathery skin. He yelped and sprang off me.

Gasping to refill my lungs, I tucked my feet beneath my butt
and launched myself off the floor. As soon as my toes hit the floor again, I
pushed off and sprang toward the retreating devil. I hit him hard, knocking him
back against the wall and holding him there with the cross. It began to vibrate
in my hand and give off tiny, stinging, electric shocks that I forced myself to
ignore.

Emo became incredibly and completely still, as only his kind
can do and stopped breathing. The only sound in the lightless space came from
my panting breath in his ear.

Emo gave a slight nod and slowly dropped his arms in
surrender. I lowered the cross reluctantly, knowing all too well that devils
weren’t to be trusted. Even if they were part angel.

I moved across the room on the balls of my feet, stepping
sideways so I could keep an eye on his aura. When I’d managed to put about
twenty feet between us, his icy, blue aura suddenly flickered and disappeared
and I felt a whoosh of hot air as he moved, with a speed I hadn’t known he
possessed, to a spot somewhere behind me. I turned to meet him head-on, but he
was faster. He hit me with a full body block that dropped us to the floor with
me on the bottom, knocking all of the wind out of my lungs and sending us both
skittering across the floor. I ended up with my head just inches from the rat
hole and, like a reluctant gawker at a particularly grizzly air bus accident, I
tipped my head back to see if the rat was anywhere near and came eyeball to
eyeball with the disgusting thing. It opened its pointed, disease-ridden mouth
and hissed at me, lunging toward my face as if it would attack.

I screamed and leaped to my feet, dislodging a devil
laughing hilariously and jumping around like a moron as I convulsed in hysterical
disgust. I did the revulsion dance across the room until there was a lot of
space between me and that twitchy-nosed, red-eyed attack rodent.

Emo lay in a giggling puddle on the floor as I commanded
lights on full and returned the cross I’d used against him to my pocket. He
finally wound down and, taking a deep breath, reached up to rub the spot on his
scaled chest where the cross had rested and stood up. “Damn, Astra. You
promised me you wouldn’t use the platinum cross anymore. That sonofabitch hurts
like hell!”

Forgetting my near-death experience with the rat for a
moment, I narrowed my eyes at him and grinned. “You would know.”

Emo showed his fangs and stepped menacingly toward me.
Unconsciously, my hand moved toward the cross again and he stopped dead in his
tracks, throwing his thick, red arms into the air in surrender.

I dropped my hand again but kept a watchful eye on him
nonetheless. Emo is generally a very sweet, very dependable devil, but when you
get his blood up in battle he can forget his manners and get pretty ugly. I’d
seen firsthand what ugly from a devil looked like and I wasn’t interested in
being on the receiving end of it if I could avoid it.

I leaned back against the wall and grinned at him. He stood
where I’d left him, his large feet braced wide apart and his corded, red arms
arcing away from his short, muscular body. Devils are generally not very tall,
but what they lack in height they more than make up for in girth. Every muscle
in Emo’s body was on red alert, pun intended and I do mean
every
muscle.