Twenty Thousand Streets Under the Sky 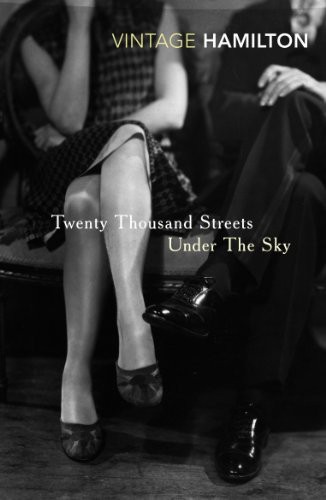 With an introduction by Michael Holroyd

The Midnight Bell, a pub on the Euston Road, is the pulse of this brilliant and compassionate trilogy. It is here where the barman, Bob, falls in love with Jenny, a West End prostitute who comes in off the streets for a gin and pep. Around his obsessions, and Ella the barmaid’s secret love for him, swirls the sleazy life of London in the 1930s. This is a world where people emerge from cheap lodgings in Pimlico to pour out their passions, hopes and despair in pubs and bars – a world of twenty thousand streets full of cruelty and kindness, comedy and pathos, wasted dreams and lost desires.

Born in Hassocks, Sussex in 1904, Patrick Hamilton was the youngest of three children. At the age of seventeen he began to train as an actor before realising that his talents lay in literature. In 1925, at the age of nineteen, he published his first novel
Monday Morning
, two more followed in quick succession, and he began to be admired and widely read. His first theatrical success was
Rope
(1929) on which Alfred Hitchcock’s film of the same name was based. His play
Gaslight
was also adapted for the big screen starring Ingrid Bergman. His novels include
The Midnight Bell, The Siege of Pleasure, The Plains of Cement
(a trilogy later published together under the title
Twenty Thousand Streets Under the Sky
),
Hangover Square
and
The Slaves of Solitude
.

The Slaves of Solitude

The Duke in Darkness

‘No other English writer has written so acutely about sexual infatuation, embarrassment and self-delusion’
Time Out

Twenty Thousand
Streets Under
the Sky

WITH AN INTRODUCTION BY

The Siege of Pleasure

II A Glass of Port

III The Morning After

IV The Marion and Bella

The Plains of Cement

P
ATRICK HAMILTON WROTE
this London trilogy when in his middle and late twenties.
The Midnight Bell, The Siege of Pleasure
and
The Plains of Cement
are each self-contained and were first published separately before being collected in 1935 under the title
Twenty Thousand Streets Under the Sky. The Midnight Bell
, which appeared in 1929 when the author was still twenty-four, is by far the most autobiographical of the three books. The tension of the narrative rises and in the last pages breaks through the structure of the novel, involving us in the emotional wreckage of Patrick Hamilton’s life.

The controlling figure in his life was his father. Bernard Hamilton had been given little affection as a child and grew up without much self-esteem or self-knowledge. ‘What a low comedian you would have made!’ Henry Irving had complimented him after he had been speaking at great length on the principles of religion. But Bernard Hamilton could never get his act together. He was a comedian equipped with a monocle but no sense of humour, a chameleon-like figure given to self-dramatization who nevertheless drank to be rid of himself. His children found it impossible to form a consistent or friendly relationship with him and would await with trepidation his return from various trips abroad. From Italy he came back a conscript father with a dash of Mussolini; from France he returned with an ineffable Gallic accent; Spain gave him an air of grave courtesy and a grandee’s dignity; alighting at Euston Station very Scotch and drunk after a journey north, he told Patrick, ‘My boy, if ever it comes to war between England and Scotland, you and I will cross the border.’

Though often absent from home, and despite violent scenes with his wife, Bernard took a solemn view of his parental
duties and, having been granted a commission in the Royal Horse Artillery, would address his children in parade-ground language and have them up for military-style inspections.

Patrick grew up a silent, observant child, fretted by anxieties, and longing for some creed of certainty – which he was eventually to find in Marxism. From his father he could win no support for his wish to be a writer, although this wish reflected Patrick’s need to feel closer to him. For Bernard, when acting the novelist, published several historical novels of which he appeared to think rather well (‘As a puff preliminary,’ he advised his publisher, ‘you may say that this is the greatest novel ever written – which indeed it is’). His disinclination to help may have come from the suspicion that his son was naturally more gifted as a writer. Instead, he sent him to a commercial school near Holborn with a marvellous letter of instruction:

On Sabbath mornings you will sit, regularly, under the minister of the Scots Presbyterian Church near St Pancras. This is a
parade
. You will then proceed to Chiswick, reporting for Dinner at one-thirty, military time – i.e. five minutes early . . . You will bring with you a weekly report on conduct and progress from your tutors, endorsed by the Principal. If any difficulty should arise, you are to say that, I, your father, the author and barrister, require this.

You will make enquiries as to membership of the City Volunteer or Cadet companies; I believe such bodies still exist. Understand this is an
order;
excuses will have no more avail with me than the preachments of Mormon missionaries.

For exercise I recommend rowing. Ascertain the conditions of membership of the London or Thames Boat Clubs – you cannot hope for Leander.

Patrick did not remain long at this school, but while there he first fell in love. ‘His surrender was instant, absolute and agonizing,’ his brother Bruce Hamilton remembered. ‘I could see that her mere appearance made him almost faint with longing.’ More damaging was a love affair which began in 1927 with Lily, a West End prostitute. This must have seemed an escape from the respectable middle-class world of his parents into the world of London’s defeated classes – the
insignificant, the needy, the homeless and the ostracized – that populate his novels. But it also followed the pattern of his father’s first marriage to a prostitute he had met in the promenade of the Empire Theatre, which ended when she threw herself under a train. The affair with Lily seemed both a copy of, and perhaps an exculpation for, that marriage – for here it is the prostitute who educates and takes revenge on the gentleman. By moving into a lower social sphere, Patrick Hamilton did not shed the insecurities implanted by his upbringing: his emotional vulnerability helped to make him one of the chronically dissolute and distressed who wander the dingy London streets and find refuge in its pubs and dosshouses.

The Midnight Bell
(1930) is an account – in places almost a transcription – of Patrick Hamilton’s disastrous romance with Lily. When first published it had the subtitle ‘A Love Story’. But the word love, though desperately repeated in the many blurred conversations, loses all particular meaning and becomes a vague shorthand for what the characters imagine they want – the possession of beauty, money or security: in short, the possession of the unattainable.

The Midnight Bell
is a study of infatuation. We are spared none of its detailed tortures or griefs, betrayals and deceits, in this anatomy of humiliation that brings us to the frontiers of Patrick Hamilton’s famous psychological thrillers for the stage,
Rope
and
Gaslight
, and his classic murder novel
Hangover Square
. ‘Her perfect cruelty and egotism appalled him . . . He would kill her.’ But there are to be no murders in this trilogy, for it is the endurance of ordinary life that we are being shown. What
The Midnight Bell
loses in detachment, it gains in intensity. The appalling monster-bores of this pub are excruciatingly observed and intimately known. As we follow the intricately plotted inanities of their tales, which divert us by driving the other characters to distraction, we do not overhear them from a distance, but are brought into their very presence.

The Night Cafe by Taylor Smith
Blackwater: The Rise of the World's Most Powerful Mercenary Army by Scahill, Jeremy
The Lonely Dominant by Ella Jade
Such Sweet Sorrow by Catrin Collier
Secrets to Seducing a Scot by Michelle Marcos
Imperial Woman by Pearl S. Buck
The Beast House by Laymon, Richard
Odette Speex: Time Traitors Book 1 by Lively, Padgett
Heal Me (A Touched Trilogy Book 2) by Angela Fristoe
On the Way to Heaven (BWWM Romance) by Stacy-Deanne