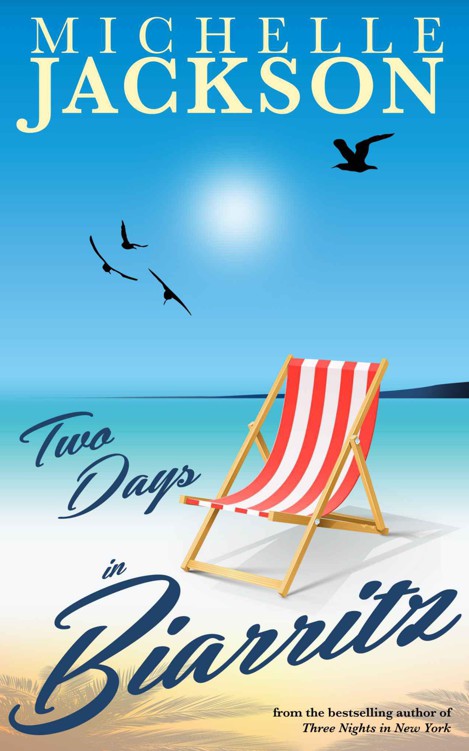 This novel is entirely a work of fiction. All characters, names and events, other than those in the public domain are fictitious and any resemblance to persons living or dead is entirely coincidental.

One Kiss in
Havana

4am
in Las Vegas

Praise for Two Days in
Biarritz

“
I just couldn’t put this book down, lovely feeling of Biarritz, and back to Howth, in Dublin. A fabulous holiday read.”
Trip Fiction

“A heartwarming story of women finding their own strength.”
Evening Herald

“Brilliant, one of the best books I’ve ever read.”
Goodreads.

“A story fashioned with sufficient light and dark to suit many tastes.”
The Irish Emigrant.

“Jackson carved a niche for herself with a winning formula for her first novel.”
Irish Independent.

Dedicated to my inspiring father, who has a way with words, Jim Walsh

“Sometimes it’s better not to tell.”

“What do you mean?” Kate was curious. Maybe she didn’t know her friend as well as she thought she did.

“Look, some things are best kept in the past.” Annabel’s tongue was loose after the alcohol and she beckoned to the waitress to bring another glass of the liqueur. She sat back on her chair. “Maybe I did go back to Nico’s room last night and have sex while you were with Brett!”

“Yeah, right!” Kate scoffed. “I think I know you well enough by now, my very married friend! And, besides, in the unlikely event that you did, you’d have told me.”

“Well, I was with him and I’m riddled with guilt, so don’t ask me any more about it!”

Kate sta
red at Annabel. She did, in fact, look guilty. It couldn’t be true! Could it? “You’re kidding me, right?”

The waitress placed two more liqueurs on the table before them.

“Thanks,” said Annabel and tossed most of hers back at once.

“What don’t you believe?” Annabel frowned.

“That you slept with Nico, of course!”

“Why?” Kate echoed, exasperated. “Because you just don’t do that kind of thing!”

“Wha’s this called again?” Annabel said, raising her second glass of the ruby-coloured liqueur to her lips in slow motion.

“Well, Kate, I think – I’m flocked!” Annabel drained the glass and liked her lips. She ran a hand through her dishevelled long blonde curls and beckoned to the waitress again.

Kate took a sip of her floc. “Come on! Tell me the truth! Did you really sleep with Nico?”

“Why d’you find it sho hard to believe?” Annabel was beginning to slur a little.

“Because you’re married, you don’t play around, you’re the sensible one.”

“Hold ish right there!” Anneb
el held up a hand. “I’m the shenshible one?” Realising she was slurring, she paused, and then made a big effort to speak distinctly. “Oh, yes, of course. You’re the artistic one, the exotic one – I’m the dull one, the boring one.”

“Yesh you are! I’ve always been the little mouse and you’ve been the – the…” she took in Kate’s long-limbed frame, jet-black hair and tanned skin, “the panther! Or sho you think!”

The waitress deposited another two flocs on the ta
ble.

“Well, Annabel,” said Kate, “the fact is, in all the years I’ve known you, even before you married Colin, you have never allowed yourself to be swept away by passion.”

“Thatsh what you think.” Annabel drunkenly pointed a finger in Kate’s face.

Kate pulled back and drained her old glass, before picking up the fresh one. “What do you mean by that?” she said, becoming irritated now at this point.

“All I am saying is, maybe I have known passion, a great passion. Mush mush more zan anyone!”

This cut much too close to the bone and Annabel felt quite hurt.  “I had my great moment!” she said flushing. “Before I ever met Colin.”

“Oh, yes, a moment so great you never even thought to mention it to me!” said Kate scornfully. “Some great moment.”

“Okay, okay,” Kate pretended to yawn, “When – and where – and what? First kiss, age twelve, school bicycle shed? You already told me that one.”

Something snapped in Annabel. She was tired of Kate’s presumptions about her sexual needs and desires, and the experience with Nico the night before had awakened a new confidence in her. “On the boat – with Damien, so zere!”

“You dark horse!” Kate said, shaking her head. “You never told me about a Damien – who or when was he?”

“On the boat! You were there! Damien, it’s always been Damien. I’ve always loved him. Zat’s why it was so easy to marry Colin.”

“I don’t know any Damien from our past,” Kate declared, more than a little upset and agitated that Annabel had kept a secret from her for all these years.

“Damien . . . you don’t know Damien? You know him very well, Kate. You lived with him long enough!”

Kate’s mouth dropped. She felt like she had received a sharp blow to her solar plexus. “My
dad
! You were . . . no, you couldn’t have been . . . were you in love with my
dad
?” Kate couldn’t believe she was uttering the words.

“I sure was, and he loved me too. On the ferry, in the storm, all those years ago.”

Kate felt like she was going to pass out. Was Annabel only talking rubbish with the copious glasses of wine and floc inside her or was she telling the truth?

“What happened on the ferry?”

“I made love to your father, Kate!”

“Tell me you’re joking, Annabel. You couldn’t possibly have slept with my father!” Kate’s head was shaking frantically.

“I sure did and I’ll never forget it.” Annabel was relieved to be telling Kate the truth at last. “I need more drink – where’s that waitress gone?”

Kate sat expressionless – unable to respond. If what Annabel was saying was true, she had been deceiving her for most of their friendship.

“I feel mush better after telling you at last, Kate – it’sh been hard keeping it from you all this time.” Annabel gave a little hic-cup as the waitress came over and took her order for another two glasses of floc. “I’m glad I told you now.”

Kate wasn’t able to drink any more. She put the napkin up to her mouth and pushed her chair back slowly.

“I’ll be back in a minute,” she said, finding it difficult to catch her breath.

She quickly walked over to the toilets. Her stomach was churning inside and her heart was racing. There was no way – Annabel and her father! She couldn’t hold the
raclette back. She felt her dinner rise back up her throat and she spewed its contents into the bowl. Her head was dripping with sweat and she felt as if she was being choked by a pair of imaginary hands.

Standing in front of the mirror, unable to wash her hands they were shaking so much, she stared at her reflection and the tears sprang to her eyes. How could Annabel do such a thing? To her mother as well, who had been so good to her! And how could she have kept that secret all those years, despite all the memories they shared together? They’d never had a true friendship. Annabel had made a fool of her. She could never trust her again.

Walking on trembling legs, she made it back to the table but had to steady herself before taking her seat.

Annabel gave a lopsided smile, oblivious to the effect her revelation was having on Kate. She looked a lot drunker than when Kate had left her only a few minutes before.

Kate leant across the table, gripped Annabel’s hand hard and stared straight into her bleary eyes.

“Annabel,” said Kate slowly, deliberately. “I’m really upset. I need to know if what you’re telling me is true.”

Kate took a trembling breath. “You had sex with my father on that ferry crossing – in the storm – all those years ago?”

“You’ve been in love with him ever since?”

“Yesh, I have. Thash why I married Colin.”

Kate let go of her hand. “But you never told me?”

Annabel’s eyes widened. “How could I tell you something like thash?”

It was true, thought Kate. This horrible thing was really true.

“I need to go to the loo now, you took ages,” Annabel grinned. She wobbled slightly as she stood up and went off in the direction of the restrooms.

Kate was feeling numb. She thought quickly and knew she had to get away. Digging down deeply into her bag, she took out sixty euros. She threw it down on to the table – anxious to be gone before Annabel returned from the toilet.

She didn’t want to have anything to do with Annabel Hamilton again for as long as they both lived.

Nico was anxious to be on time for his arrangement with the Irishwomen.

“You’re jumping around like a hare, Nico – relax and finish your beer,” Brett said with a shake of his head.

“I told Kate and Annabel we would meet them in Desperados,” Nico said reluctantly.

“I wish you hadn’t included me in your arrangements. One night with them was enough,” Brett said, taking a sip of his beer. “Anyway, we have Frank with us this evening.”

“Hey, I don’t want to get the blame for Nico missing out on his fun,” the scrawny Londoner laughed.

“He already had his fun with this bird last night,” Brett grinned. “That’s the bit I can’t understand.”

Nico felt awkward. Usually one night would be enough – the guys were used to picking up women all over
Europe as they went from beach to beach, but Annabel was intriguing.

He took another drink from his glass and scanned his watch.
Nine forty-five, they weren’t the type of women to sit around waiting.

“Will you have another beer, mate?” Frank asked Nico.

“Sure,” he replied sullenly, making sure not make eye contact with Brett. “I’m going out to get some fresh air.” He pulled his chair back from the table.

“Tell the truth. Are you going to Desperados?” Brett asked.

“I’m going to tell them that we can’t make it. It’s only around the corner – I’ll be back in a minute.”

Brett shook his head scornfully and continued his conversation with Frank.

Kate tossed the clothes into her holdall with great urgency. She didn’t want Annabel to catch her packing. It wouldn’t take her long to realise that Kate had left the restaurant and by then she needed to be well out of Biarritz.

The receptionist was startled to see her return to the desk and pay her bill at such an hour.

Kate’s plan was simple – she would spend the night in one of the many hotels in
Bayonne. The Ibis would certainly have plenty of rooms available this time of year. The drunken Annabel was not her responsibility and she couldn’t look her in the eyes after their conversation.

Suffering as she was at being betrayed by her best friend, Kate’s thoughts had now swung to her father. Her insides twisted at the thought of him. How could he have done it? How could he have done it on her mother? The night of the storm. No wonder her father didn’t pass any comment when she was missing from her cabin all night – Annabel was curled up under the covers in his. The thought repulsed her so much she felt dizzy and had to sit down in the small foyer. She wanted to be at home in her small house under the gaze of the Pyrenèes.