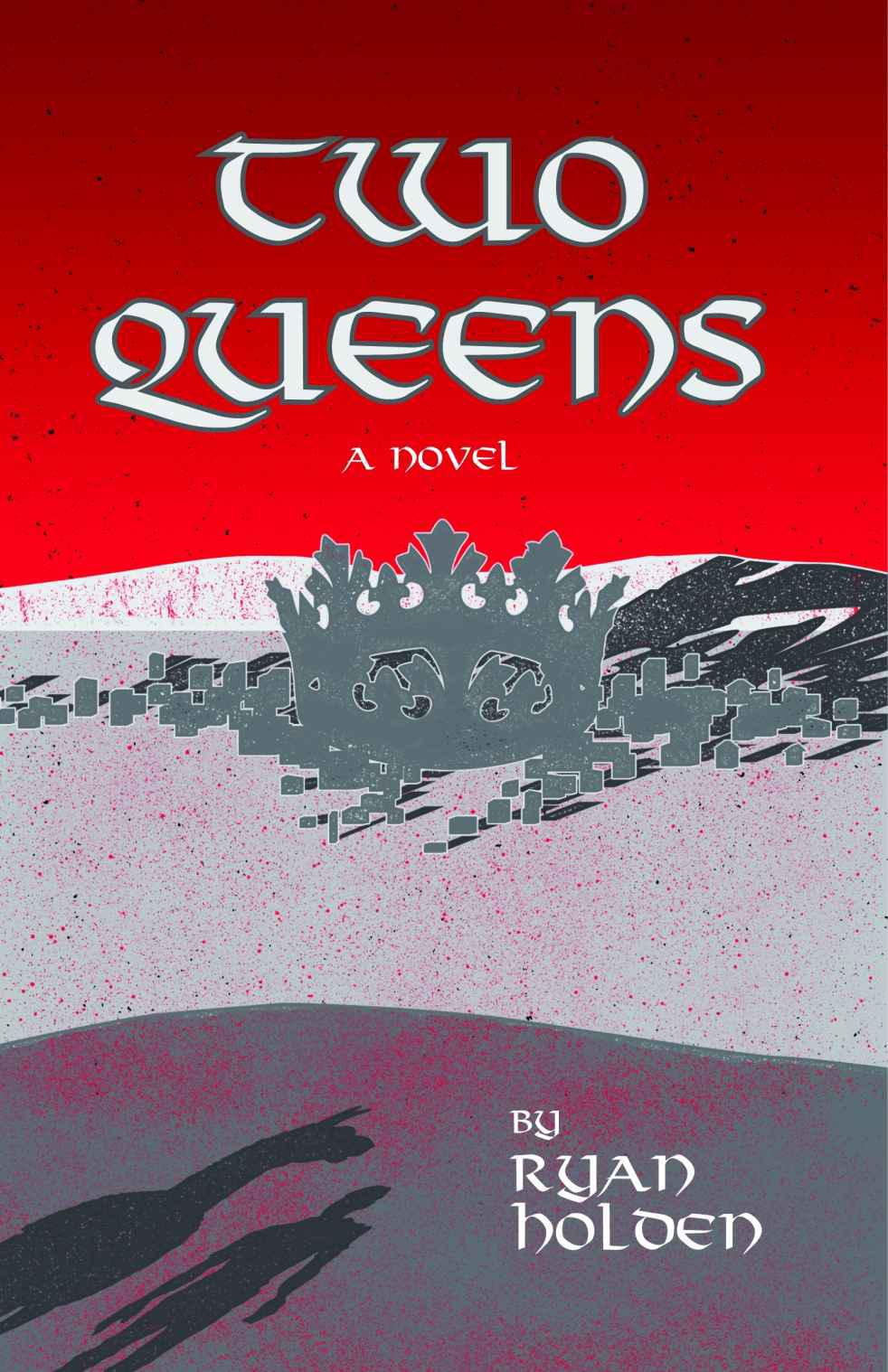 Book One of
The Seven Heavens

a novel by Ryan Holden

One's palace was her home,
The other's home her sole realm.
One by queendom Mother,
Other through motherhood crowned.
One Life-giver, the other life gave,
A life sacrificed and a life not saved.
Both watch, guide, suffer,
Not for wealth, power, renown.
For love all this offered,
On this blood-hallowed ground.

the regions of the two rivers

Kardja wool was Darach's chief export. It could be considered Darach's only export. The browns, grays, whites, and occasional blacks that the sturdy kardja stock provided year after year were spun into yarn, rolled into felt, or drawn into thread and shipped westward. Each spring at shearing time, the town tripled in size as the people of the steppes came down with their herds to meet the merchants and peddlers.

On market day, Ramona came down from the mountain with her husband and toddling son. They took in the sights, Ramona especially revelling in the bustle of the town fair after a year of mountain life. She watched her husband as he wandered along the stalls, seeing what the merchants had to offer. They were not the best she had seen. She smiled sadly. She was not looking her best herself.

Some were buyers solely. Their furtive eyes peered at the yarn proffered disconsolately. They had coin for their purchases and fought the prices down to the smallest sliver of worth. It seemed they were never happy with the quality. Yet they always returned.

Others were traders, not content to deal in Kyrian coin except where absolutely necessary. They honed in on the wives with offerings of bright colors and unique designs to make use of the festive atmosphere.

Ramona wandered about in her husband's wake then left him to his haggling. Devlin would spend whatever time it took to get the right deal. What was a few hours when a year of toil had protected the backs that bore the wool? He even used her disinterest as a bargaining point.

She meandered through the stalls and booths and backs of wagons arranged about the town's pasture. In a world left behind, she had what wool she wished. At no cost to herself and not merely wool, but bolts of cloth spun so fine that no wind could penetrate it, in any color she wished, and a wardrobe filling entire rooms.

A loud ringing caught her ears. She had heard this before. A vision of bronze bells high in the morning air swept into her mind and her spine tingled. Even as she thought this she knew the sound was different.

Her feet paced in search of the source like iron filings to a magnet. Brian squirmed in her arms. She let him down and held his hand as he walked beside her.

They left the carts and pavilions of the traders behind and walked into town, the town that stayed there year after year. Not many steps were taken for her to unravel the mystery of the sound of the gong. A blacksmith, stripped to the waist despite the morning chill, struck at a piece of metal held in his forge. He wore a great black apron strapped about his waist. His massive arms seemed a second suit of clothing, so large and leathery they were.

Her spirits sank despite already knowing it was not bells she heard. Her eyes caught sight of a dew-eyed creature. It was a fine-featured mare with long-lashed eyes and a nose as soft as a sheep dog's. Her near eye caught Ramona's. Her ears flicked in her direction and she nickered.

Brian's hand clenched hers. She picked him up again. “It's okay, she won't hurt you.” She thought he would be less scared if he was as high as an adult.

Ramona moved closer and sighed. Not the stubborn mule or nondescript donkey. Not an overworked pack horse with barely any sinew left between bone and skin. But an honest-to-goodness ladies riding palfrey. The mare raised her head out of the now-empty bag and blew in the cool air.

“That's it, girl. How was your breakfast?” She stroked the mare's neck. “You want to touch her, son?”

The boy buried his head on her neck. Oh well.

“Like what you see, woman?” A bustling man with a bright eye accosted her from her right. Startled, Ramona blushed. She'd forgotten how rude it was to talk to other people's animals. “Unfortunately this one is not for sale. Well, if you offer a price I would hear you out but”—he sneered at her clothes—“I don't think you trade in the proper range.”

Abruptly he switched his tone from demeaning to wheedling. “Most of you are scared of our horses. You think your kardja superior in all respects. But not you, I see. You are not from these parts, no?”

He took in the black hair, the blacker eyes. “Though you dress like it. But who could mistake the woman for the clothes? In disguise, yes, but then I am not fooled by disguise.”

Ramona did not appreciate his flattery. She had disliked the demeaning less. “I have learned to appreciate the kardja. But I have not forgotten the horse's heart.”

“A wise answer,” the merchant laughed. Merchant he was despite his not-for-sale plea. “Especially as you have a horseman, if I do say so myself, next to you and a village clod within hearing. Not that he would have an opinion of his own on the matter. But then he is a large man and some would fear him. But not you, of course, whose noble heart is as courageous as that of the horse.”

The blacksmith glowered at them as he walked the red-hot bar of pig iron to the pail to cool it. Ramona drew back but wondered whether their mere presence was disturbance enough. Brian poked his head up at the motion.

“My apologies, kind sir, if we interrupt your work.”

He grunted and shoved the bar in the pail. Angry steam clouds flew off the metal, hissing up into the blacksmith's still face.

“Yes, yes, no appreciation for art, this one. That is, except perhaps in the shoeing of horses.” The merchant was making the rounds on the white mare, stooping to check her newly shod hooves. “I guess everyone has their place in the world, right? You must have been born to shoe. The White One must think you very important to care for them so.” He sneered.

It was a simple squarish building. If something that is misses two walls may be properly termed square. A porch? Veranda? The forge abutted one, staying out of the east wind, while various tools and bits of metal flaked the other. A tangled mess of metal caught her eye—she could see no purpose in it. Everything else had an obvious function but not this. Its surface gleamed from a recent oiling. She wondered what it was.

Ramona wondered even more what this blacksmith did when there was no market. Kardja didn't need to be shod: to do so was unthinkable, one of many reasons why the highlanders preferred them to horses. The short spears the herdsmen carried for the cougar and wolves couldn't keep a blacksmith busy all year, could they?

“As the lady is so wise in the way of horses, she must be a true connoisseur of the wardrobe. Could I chance her favor with this beautiful sash, made by none other than the handmaidens of the Queen?” The merchant had retrieved a closely woven piece from the mare's saddlebags and held it in front of her. “So handy this is. Makes an outfit all of itself. Warm to wrap the boy in, as a scarf, a belt, or a hat. Only the imagination limits its use and with you, pretty woman, that is no limitation at all.”

She looked at it and felt its texture. Instantly she realized that, even if it was made in Avallonë, the cloth had first come off of a kardja's back. She asked the price and a couple minutes later, after repeating for the third time that she was not interested, received a decent estimate of its value. She played with the corner of the sash for a moment. Then, not wanting to give the wrong impression, left it in his hands.

“What is that article on the wall, blacksmith?”

“What business is it of yours?”

“None whatsoever.” They stood staring at each other. Brian looked from face to face, eyes wide open.

“I am sorry if I bother you. That was not my intent. It is
your
business I am asking about.” She set the restless Brian down beside her.

The merchant lead the white mare out, muttering under his breath. The blacksmith turned back to his work.

“Please, we haven't met. My name is Ramona. May I have your name?”

A child's scream rang out. A woman walked around the corner bearing the responsible party. “Kerdae! You keep your brat and your pittance of pay. No more of this for me!”

The blacksmith turned away from his work. His brow knotted and his eyes looked from woman to child to the bar in his hand. Ramona wondered if all his mornings were this productive. The woman moved to deposit the child but hesitated. A faint blush crossed his face already pink from the fire.

Ramona saw her chance. “May I?” she asked, reaching for the child but looking at Kerdae. His face gathered up even more contortions of discomfort. “Just for now, until your hands are free?”

The woman dropped the infant into Ramona's arms and turned to leave. Ramona didn't watch her go: the reddish-brown haired girl absorbed all her attention. Ramona held her close, noticing her spare and soiled attire.

“What's your name dear? You're such a petite thing. You must have a beautiful name. Do you see my son down there? His name is Brian. He is black-haired, like me. You, however, have the most lovely reds in your hair. Here, let me get you something. Have you had this before? I'm sure you have. You like cheese, right?”

The baby decided after some prodding that cheese was preferable to crying. She smacked her lips on the morsels Ramona broke off for her one by one.

Ramona looked up to see Kerdae standing an arm's length away. She almost saw peace as he looked on his daughter's face. Love was clearly there. Ramona looked back at the daughter and let her happy babbling speak. She would not be thrown out of the smithy now.

Eventually he spoke. “Who are you?”

She smiled. “My name is Ramona. My husband Devlin and I follow our kardja on the slopes of Mount Finola.”

Kerdae made no answer. “That's the last piece, sweetie.” Ramona switched the baby to her other arm then grabbed Brian's hand to prevent him from exploring the forge. “I was-, I am curious about that article because I think we might help each other.”

“Do you buy and sell in the market? Or does your smithy keep you at all times?”

“I haven't gone since-” He looked at his girl and stopped talking.

“I see. Did you want her back? I mean, your daughter?”

He stood there looking this way and that.