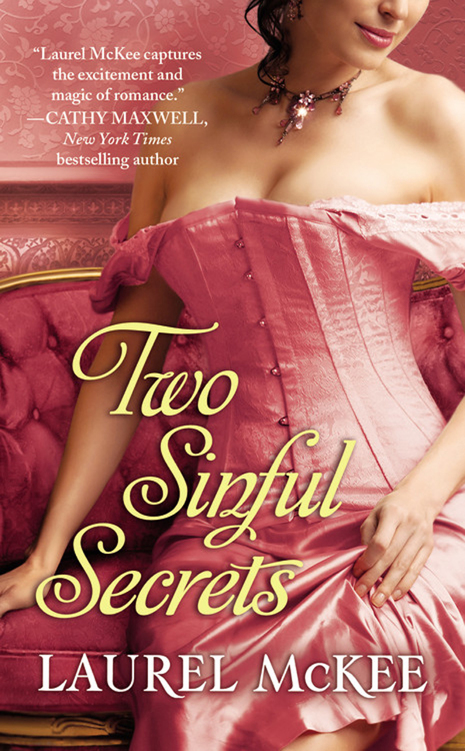 A Preview of
One Naughty Night

In accordance with the U.S. Copyright Act of 1976, the scanning, uploading, and electronic
sharing of any part of this book without the permission of the publisher constitute
unlawful piracy and theft of the author’s intellectual property. If you would like
to use material from the book (other than for review purposes), prior written permission
must be obtained by contacting the publisher at [email protected] Thank you
for your support of the author’s rights.

To the Martini Club—Alice, Kathy, and Christy. I could never survive the week without
looking forward to Fridays!

L
ady Sophia Huntington carefully studied the cards in her hand. Not a bad hand, but
not as good as she would like either. Her usual good luck at the card table wasn’t
with her tonight.

Or maybe she was distracted.

Sophia peeked over the edge of the cards to study the man across from her through
the beaded eyeholes of her mask. Dominic St. Claire. She knew it was him, even though
he, too, wore a mask, a swath of stark black silk over his chiseled face. No one else
she had ever seen had hair quite that shade of pure, molten gold, or such fine shoulders
under his perfectly tailored coat. His eyes, the deep, pure green of summer leaves,
gazed back at her steadily, making something flutter nervously deep inside her.

No wonder her parents didn’t like her going to the theater, she thought wryly. One
glimpse of such a godlike being onstage and she wouldn’t be able to bear her pompous,
pale, parentally approved suitors any longer.

And he was wrecking her concentration at cards as
well. She definitely couldn’t have that. Not when she had finally been able to escape
her family’s guard and sneak into the Devil’s Fancy using her cousin Bill’s invitation.
It would be hard to come back again, so she would have to make the most of this evening.

But she might have tried harder to come here a little sooner if she had known Dominic
was one of the owners. She had thought about him far too much ever since that glimpse
in the park.

“Well, madame?” he asked, in his deep, smooth actor’s voice. A small smile played
over his lips, surprisingly full and sensual for a man.

Sophia, who was such a good card player in part because she had become adept at reading
people’s faces, couldn’t fathom what that smile meant at all. Did he hold a good hand?

Or was he flirting with her?

Sophia looked back down at her cards. “Two more, please.”

Dominic took two cards from the deck and slid them across the small, red-draped table
to her. He had beautiful hands, the skin smooth and faintly bronzed, dusted with pale
blond hair, tapering fingers made for theatrical gestures on a stage or wielding a
sword.

Or tracing a soft touch over a woman’s skin, which she had heard he was quite adept
at doing.

Sophia forced down an instinctive shiver at the vision of his hand on her body and
forced herself to forget he was there, so close, watching her. She had just wagered
the last of her quarterly allowance, and she couldn’t afford to lose her focus now.
She slowly turned over the new cards and almost sighed.

Luck was really not with her tonight.

She laid out her cards on the table, hoping against hope his hand was worse. That
faint hope died when he revealed his own cards, and he had her beat by several points.

“You win again, sir,” she said with another sigh. “It seems Lady Luck favors a sinfully
handsome scoundrel as much as the next woman.”

Dominic laughed, and the emerald sparkle in his eyes almost made it worth losing.

“Forgive me, madame,” he said. He gathered the scattered cards from across the table
and lazily shuffled them back into the deck. “I take no pleasure in disobliging a
lady. Shall we play again? Lady Luck is often fickle.”

Sophia shook her head regretfully. She longed to play again and try to get back that
money. It was what so often led her into trouble, the obsessive thought that with
the next hand her luck would surely turn. Equally bitter was the thought that now
she would lose Dominic’s company. She had never enjoyed losing at cards so much as
with him.

But she had nothing left to wager. She wore her grandmother’s diamond and onyx earrings,
necklace, and hair clips to go with her black satin gown, and her mother would definitely
notice if they were gone.

“I’m done for the evening, sir,” she said. “But I confess I’ve never enjoyed losing
quite so much. It’s no wonder your club is so successful.”

His head tilted slightly as he studied her, his green eyes growing darker. “And how
do you know I own this club?”

Sophia smiled and leaned closer to him, resting her arms on the table as she reached
out to smooth one fingertip over a lost card. Oh, yes—he did bring out a spirit of
the devil in her. “Oh, I know a great deal about you.”

“That’s hardly fair, is it?” he said, laughter lurking in his voice. Laughter and
something darker, something she couldn’t read. “I know nothing about you, except that
you are a fierce opponent at the card table.”

His fingers slid over her hand. It was a light touch, teasing, testing, his skin cool
through her lace gloves. But Sophia felt as if fire had just licked along her arm,
burning and shocking. She had to force herself to stay still and not jerk away and
run screaming from the salon. She had never felt anything like it. It was almost—frightening.

She touched the tip of her tongue to her dry lips as his hand slid away. “Wh—what
do you want to know?”

He suddenly frowned, as if a shadow passed over his face. “Everything.”

She had wanted to see Dominic St. Claire tonight. Something had driven her to seek
him out after she saw him and felt so strangely drawn to him at the park. But now—now
she felt afraid of what he awoke in her.

And Sophia was never afraid.

“Come with me,” Dominic said. He rose to his feet, his gilded chair scraping back
over the parquet floor, and took her hand in his. His smooth, polished, charming manners
suddenly took on a raw edge, and it was as if she
was glimpsing the feral power under his poetical beauty. And it made her even more
afraid.

Yet she couldn’t pull her hand away. She couldn’t turn and run as she longed to. Something
in her bound her to his touch. He was so very different from everything she had ever
known, every convention her parents pushed onto her, every safe suitor and narrow
expectation. Something in him called out to the secret darkness within her that always
brought her to places like the Devil’s Fancy, to card tables and deep play.

Something in him was the same as her. She had that terrible certainty as she looked
up into his forest-green eyes. And she let him take her hand and lead her through
the crowded salon.

The hour grew late, and champagne had been flowing freely, driving the laughter louder
and louder. Ladies leaned on their escorts’ shoulders as they watched the roulette
wheel spin wildly, and she could hear music from the ballroom. But it was nothing
to her, a mere echo. The only real thing was Dominic’s hand on hers. What was she
doing?

Where had he been all those long, dull months and years of her life?

He led her down the staircase, past couples who sat against the banisters whispering
together. They went to the cold marble foyer where she had talked her way past the
grim-faced butler earlier that evening. The man wasn’t there now, and there was only
the quiet of the night after the loud party.

Dominic opened a door half-hidden in the wall and tugged her in after him. When the
door closed, they were closed off in darkness. The only light was a faint glow
from a window high in the wall. Sophia leaned back against the door and saw they were
in a tiny sitting room of sorts, crowded with the hulking shapes of furniture.

But then Dominic braced his palm flat to the door above her head, his warm, tall body
close to hers, and she knew only him. He pulled off his mask and threw it to the floor.
His face was lean and harsh in the light, his eyes brilliant as he stared down at
her.

Sophia thought he must be a supremely intense Hamlet. It was no wonder ladies flocked
to his theater.

“Who are you?” he asked, his voice low and rough.

Sophia swallowed hard. “Just a woman who enjoys a good game of cards.”

“And what else do you enjoy?” He reached up and gently traced the curve of her jaw
with his fingertips. Sophia shivered, and his fingers skimmed lightly over her cheek.

When she felt him touch the edge of her mask, she drew her head back. A little spark
of reality came back to her. She was daring, true; something drove her to seek out
places like this, to find somewhere beyond her small, restricted world. But she didn’t
want to be completely ruined either.

And she also remembered the dark glare Dominic had given her cousin Aidan in the park.
He did not like her family. He couldn’t know who she was.

His hand slid away from the mask to toy with her earring and the curl of hair over
the soft shell of her ear. His mouth followed, and Sophia gasped at the feeling of
his hot kiss, the sound of his breath against her. Her knees went weak beneath her,
and she pressed back harder to the door.

Dominic’s lips moved along her neck, pressing light,
caressing nips to her skin and then soothing them with the tip of his tongue. Sophia
clutched at his shoulders to keep from falling, and she felt the ripple of his powerful
muscles beneath the layers of fabric. She had never felt like this before. None of
the kisses her suitors pressed on her in garden groves at Society balls could possibly
compare. They always made her want to laugh at the ridiculousness of it all. But this…

This made her feel as if his touch had set her on fire and made her come completely,
gloriously alive for the very first time. Not even the rush of a winning hand of cards
made her feel this way.

Dominic groaned, and she felt his tall body press even closer against her. His arm
came around her waist and pulled her up on her toes.

“Who are you? Where do I know you from?” he said hoarsely as he kissed the corner
of her mouth. “Tell me.”

Sophia frantically shook her head. Her thoughts went all hazy when he did that, so
fractured and unfocused she couldn’t put them together. She feared she would shout
out her name for him.

“Tell me,” he whispered again, and kissed the other corner of her parted lips. “I
have to know.”

Silvermeadow by Barry Maitland
The Dark of Twilight (Twilight Shifters Book 1) by Kate Danley
Pasado Perfecto by Leonardo Padura
Unto a Good Land by Vilhelm Moberg
Please Don't Die by Lurlene McDaniel
The Broken Land by W. Michael Gear
The Eyes of Kid Midas by Neal Shusterman
Fletch Reflected by Gregory McDonald
Death Of A Hollow Man by Caroline Graham
The Dirty Divorce by KP, Miss