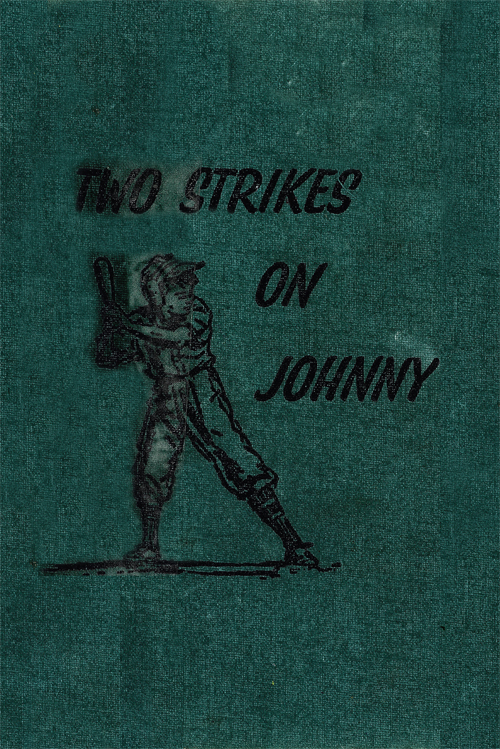 LONG STRETCH AT FIRST BASE

BREAK FOR THE BASKET

TALL MAN IN THE PIVOT

CHALLENGE AT SECOND BASE

ALL RIGHTS RESERVED. NO PART OF THIS BOOK MAY BE REPRODUCED IN ANY FORM OR BY ANY ELECTRONIC OR MECHANICAL MEANS INCLUDING
INFORMATION STORAGE AND RETRIEVAL SYSTEMS WITHOUT PERMISSION IN WRITING FROM THE PUBLISHER, EXCEPT BY A REVIEWER WHO MAY QUOTE
BRIEF PASSAGES IN A REVIEW
.

To my wife
Cay

The words were like an alarm clock waking Johnny. He was looking at the baseball that Butchie Long had just hit between left
and center fields. Butchie was running hard to first base. The man who was on first rounded second and was running for third.

The Mudhens' left fielder picked up the ball, pegged it in. The shortstop caught it on a bounce, spun on his heel, and threw
the ball to third. The third baseman touched the runner with the ball, but
Davie Randall, the runner, was already on the bag. He was standing on it with both feet, his arms crossed, and a big smile
on his dark, round face.

“Thataway, Butchie!” the gang on the bench yelled. “Thataway to hit that apple!”

“Ducks on the pond, Johnny!” shouted a man sitting on the stand behind the backstop screen. “Knock 'em in!”

Johnny knew that ducks on the pond meant men on bases. The man who had yelled was Mr. Greenfield, Buddy's father. Buddy was
the left fielder for his team, the Cardinals. Johnny picked up his bat and looked toward the stand. Mr. Greenfield smiled
at him and clapped his hands.

Then Johnny looked across the empty
spaces of the small grandstand at his younger brother Michael. Michael was sitting on the bottom seat directly behind home
plate. He had thick blond hair and light blue eyes. A batch of freckles looked like pepper sprinkled around his little round
nose. He was smiling and waving his right hand.

Johnny waved and smiled back, even though Michael could not see him. Sand, the big shepherd dog lying on the grass at Michael's
feet, lifted her long snout from her front paws and flopped her white tail.

Johnny turned and walked to the batter's box. His stomach tightened into a knot. He did not have to stand in the box to find
out what he was going to do. He knew already.

Johnny stood on the left-hand side of the plate. He heard Butchie on second base and Buddy on third. They were leaning off the bags, yelling for him to hit the ball. 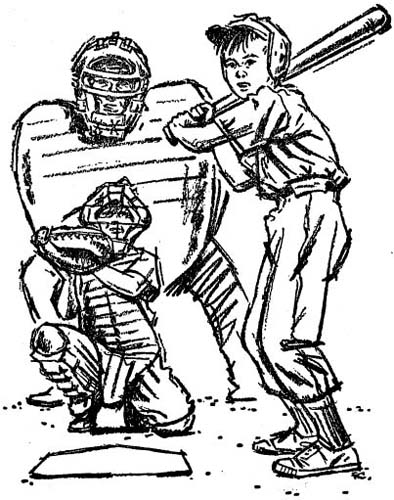 The pitch came in. Johnny didn't know whether to swing or not. The ball was coming in low. Suddenly he swung, but he swung
too late.

“Strike!” yelled the masked umpire standing behind the catcher.

“A nice single, Johnny! Just meet it!” It was Mr. Greenfield again.

The catcher returned the ball to the pitcher. The pitcher stepped into the box, stretched, and threw. The pitch was fast.
Johnny watched it with wide eyes. It was high. He was sure it was. And then suddenly he wasn't sure. The pitch looked shoulder-high
and ready to cut the heart of the plate.

But Johnny could not move his bat. He just stood there, the bat stuck on his shoulder.

Even if it was a “pun'kin,” I couldn't hit it, thought Johnny. He felt choked up inside. He wished Michael had not come. He
would not have felt so bad then. But Michael always wanted to come. He wanted to sit with Sand behind the backstop screen.
He wanted to hear the teams shout, the crack of the bat as it hit the ball, the pounding of feet as the men raced around the
bases. But most of all he wanted to hear Johnny hit the ball. Nothing counted half as much as what Johnny did.

Johnny brushed the thought of Michael out of his mind. He dug his feet into the dirt and gripped the handle of the bat with
both hands.

The pitch came in. It was wide. Johnny let it go by.

“Ball one!” cried the umpire.

Johnny tugged on the brim of his baseball cap, pulled up on the belt of his pants. He watched the pitch come in. If he could
only smack the ball between the outfielders, it might go for a home run. Then he would really have something, to tell Michael.

The ball came in chest-high. Johnny stepped into it, swung. Crack!

The ball sailed almost straight up into
the air, curved, and came down near second base. The second baseman for the Mudhens stood waiting under it. He caught it easily.

Johnny ran all the way to first base. He saw the Mudhens drop their gloves and run in, and realized that he had made the third
out.

He bit down hard on his teeth and ran out to center field. He picked up his glove, turned, and looked across the long way
to the stand. Michael had a big grin on his face and he was clapping his hands like crazy.

He must have thought Johnny had gotten a hit.

T
HE
first batter for the Mudhens hit a ground ball to short. Shortstop Stevie Little caught the ball on a bounce, whipped it
to first. The ball was high and wide. First baseman Freddie Turner stepped off the bag, nabbed the ball, then touched the
runner before he reached first.

“Out!” yelled the base umpire.

The second batter bunted a ball down to third. Davie Randall ran hard after it. He tried to field it, but he slipped on the
grass and just sat there. He pounded the ball disgustedly against the ground, then
rose to his feet. The batter was standing on first base, grinning.

“Let's get a double, Davie!” Stevie Little yelled, pounding his fist into his glove.

Davie motioned Butchie to play in closer at third. Then he stepped into the box, made his stretch, and threw. The batter stuck
out his bat for a bunt. He missed.

“Strike one!” said the umpire.

The runner on first had started for second.

The whole infield was yelling for Marty French to throw the ball to second. Marty was short and fat. He could hardly move
with his mask, belly guard, and knee guards strapped on him. But Marty had a good arm. He heaved the ball down to
second. Stevie Little covered the bag. He caught the ball. The runner slid, kicking up a cloud of dust. But Stevie tagged
his ankle with the ball before his foot touched the bag.

“Out!” shouted the umpire.

There were two outs now. The next batter walked. The fourth batter took a called strike, then hit a long fly out to center
field.

Johnny saw that the ball was going over his head. He ran back, keeping his eye on it. The ball was dropping fast. It might
go for a home run.

Johnny ran harder. He raised his gloved hand as high as he could. Plop! The ball landed right inside the pocket of the glove
and stuck there!

Johnny stopped running. He could hear his teammates shouting his name.

Johnny pegged the ball in to the pitcher's box. The inning was over.

“Nice catch, Johnny!” Mr. Greenfield yelled from the stands. Johnny's eyes twinkled as he ran across the diamond toward the
Cardinals' bench. “Thanks,” he said.

He looked at Michael. Michael was smiling happily and Sand was thumping her tail.

Johnny blinked his eyes. “Thanks, Michael,” he answered. He went and sat on the bench.

“What inning is this?” he asked Manager Davis, who was keeping score. Manager Davis was tall, wore orange-rimmed glasses and
a sweat shirt. 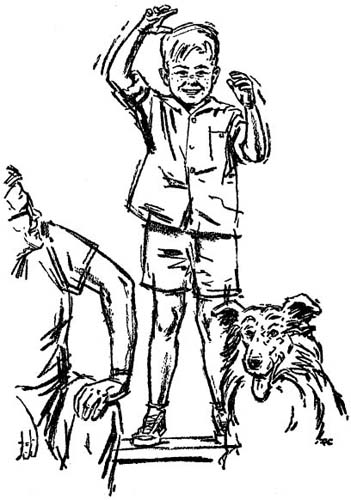 “Last of the third, Johnny,” he said.

“The Mudhens have three, we have one. You guys had better get some hits. Can't win without hits, you know.”

Mickey Bonzell, the right fielder for the Cardinals, was first batter. He swung at two wild pitches, then waited until the
count was two and two. Then he swung at one that was so low it almost hit the plate.

“You're out!” said the umpire.

Mickey turned and walked sadly back to the bench.

Peter Jergens, the second baseman, was up next. He was the lead-off man in the line-up because he was the shortest man on
the team. He was walked most of the time.

The Mudhens' pitcher tried his best to
put over a strike. The first three pitches were either too high or too wide. Then, “Strike one!” said the umpire.

Everybody on the Cardinals' bench groaned.

The next pitch was high again. Peter walked.

Stevie Little hit a pop fly to second, then Buddy Greenfield pounded a line drive to left field. The fielder caught the ball
on the first hop, threw it to third. Peter dashed to second.

Marty French took off his equipment and picked up a bat. His pumpkin-round face and his clothes were covered with sweat and
dirt. He was grinning.

“Watch me,” he said. “I'll murder that ball. I'll plunk it out into that next cow pasture.”

He took the first pitch for a called
strike. Then he swung at a pitch and hit it Solid. The ball climbed high into the air, sailed over the center fielder's head.
The Cardinals jumped off the bench and yelled as Marty rounded first, then second, then third.

Marty puffed like a tired engine going uphill as he raced for home.

“Where's my bicycle?” he shouted.

Everybody laughed. The Mudhens' third baseman caught the throw-in, turned, and whipped the ball to the catcher.

Marty slid. The catcher tagged him, but not in time.

Marty climbed to his feet, walked out
of the cloud of dust, and shook his head.

“That was lucky,” he said. “I told you I should have had my bicycle!”