Ultimate Explanations of the Universe 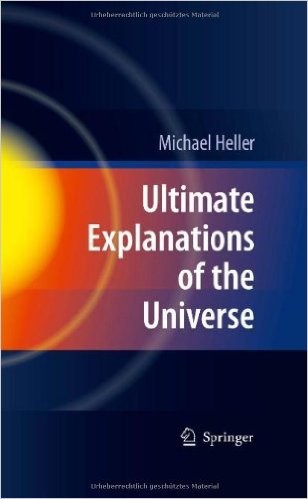 This work is subject to copyright. All rights are reserved, whether the whole or part of the material is concerned, specifically the rights of translation, reprinting, reuse of illustrations, recitation, broadcasting, reproduction on microfilm or in any other way, and storage in data banks. Duplication o f this publication or parts thereof is permitted only under the provisions of the German Copyright Law of September 9, 1965, in its current version, and permission for use must always be obtained from Springer. Violations are liable to prosecution under the German Copyright Law.

The use of general descriptive names, registered names, trademarks, etc. in this publication does not imply, even in the absence of a specific statement, that such names are exempt from the relevant protective laws and regulations and therefore free for general use.

The longing to attain to the ultimate explanation lingers in the implications of every scientific theory, even in a fragmentary theory of one part or aspect of the world. For why should only that part, that aspect of the world be comprehensible? It is only a part or an aspect of an entirety, after all, and if that entirety should be unexplainable, then why should only a tiny fragment thereof lend itself to explanation? But consider the reverse: if a tiny part were to elude explanation, it would leave a gap, rip a chasm, in the understanding of the entirety. Every, even the smallest, success scored by science is a step in the right direction, a sort of promise that somewhere along that direction, maybe still a very far way off beyond a runaway horizon, lies the ultimate explanation.

Only rarely are such thoughts, or rather such moods allowed to come to light in the enunciations scientists make. But they linger in their sub-conscious, suppressed by declarations that all that scientists are interested in are the results of research; empty speculation they leave to philosophically-minded dreamers. However, as we know, a repressed sub-conscious gives rise to a variety of pathological conditions, and in the sphere of ideas pathologies are particularly dangerous. It could be said that by addressing the issue of ultimate explanations in science I have decided on a course of psychotherapy, above all for myself. The ideas allowed to stray into the margins of my scientific papers have finally to be brought to order, put down on paper and submitted to public discussion and assessment. In science there are no psychotherapies but only such that are collective in kind, and hence the presentation of my ideas in book form seems the best choice of a therapy.

In the first chapter I explain and discuss the schema of this book at length, thus I feel absolved from this duty in the Preface. I would only like to draw attention to the plural in the book's title:
Ultimate Explanations of the Universe
. If there are many of them, then the problem is still open.

I would like to express my deep gratitude to Teresa Bałuk-Ulewiczowa for translating my book into English, not only for maintaining a scrupulous fidelity in rendering my ideas but also proficiently reproducing the mood that attended them. I am likewise deeply grateful to Angela Lahee of Springer Verlag, thanks to whose professionalism and personal intuition throughout the entire process of this book's creation the work on it was more like a continuation of writing, rather than the struggle to smooth out style and sense usual in such situations.

Trouble in Texas by Katie Lane
Craving the Forbidden (Mills & Boon Modern) (The Fitzroy Legacy - Book 1) by India Grey
Six Feet Over: Adventures in the Afterlife by Mary Roach
NextMoves by Sabrina Garie
Fly by Night by Frances Hardinge
The Fyre Mirror by Karen Harper
Righteous Indignation: Excuse Me While I Save the World! by Andrew Breitbart
Vicious by Debra Webb
Shooting Starr by Kathleen Creighton
Bill 3 - on the Planet of Bottled Brains by Harrison, Harry