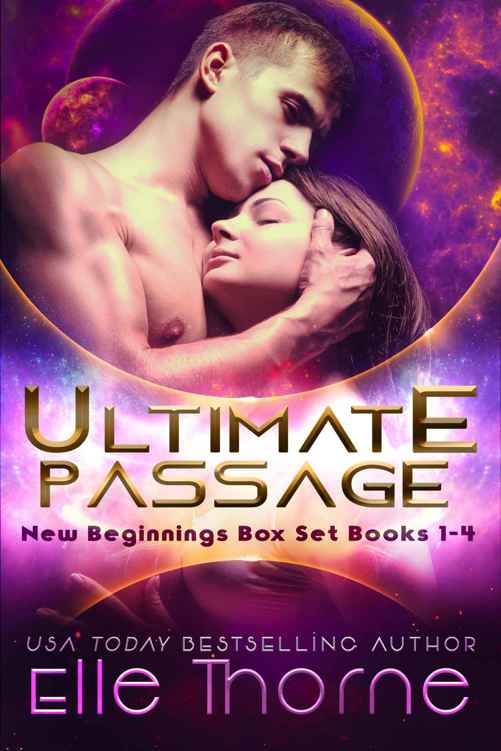 A
sexy sci
-fi new adult series Finn and Marissa—and a few friends. Follow them as they travel between two planets trying to save loved ones and avoid enemies. A sexy alien and the human hellion he can't resist, even when she's his intended target.

F
inn is
an alien soldier without emotions. His people don’t yield to emotions. Or do they?

Marissa Sanchez is a determined, smart-mouthed, Texas Latina spitfire that brings out emotions Finn’s Asazi nature rejects. And she’s a woman with a target on her.

He’s the Savior. She’s the hellion. Boy, is she ever!

Taya is a former concubine with desires that she wasn't raised to cope with. She finds herself attracted to a Kormic warrior--one of the Asazi blood-sworn enemy.

B
arz is
a warrior who's given up on love--and women. The last thing he wants to do is have feelings for the Asazi ex-concubine with the red hair, flashing blue eyes, and shimmering skin that betrays her desire.

Tradition dictates that he has to share her with his brother.
He's over the whole sharing thing.

Both Taya and Barz, the ex-concubine and the warrior, are staying with Finn and Marissa, stuck on Finn's home planet, waiting for Saraz to create a portal that leads to Earth. Except Saraz won't create it until Marissa gives birth to the child Saraz claims has been prophesied.

Ali smuggles herself to Earth. A fresh start in a fresh place, where there are no expectations, no boundaries. Or so she thinks. But she's got restrictions placed on her by her own kind, even here on Earth. What's a woman to do?

The solution? Fit in somewhere. Where can a woman with wings and shimmering color-changing skin go? Easy! An exclusive nightclub where bodypaint and costumes are the norm.

What she didn't expect to be the norm was the sexy stranger. Thane put the S-E-X in sexy. And he's got more secrets than she does.

I
f you can’t click
, just put this in your browser:

A
n alien soldier without emotions
.

Finn is three quarters Asazi and one quarter human. He's a lieutenant in the Asazi army and his desire is to be the best soldier he can. He's spent a lifetime denying his human side, only to find out that now it makes him key to a mission on Earth. A mission that includes Marissa Sanchez, Target 41, a determined, smart-mouthed spitfire that brings out emotions his Asazi nature rejects.

A
human woman
with a target on her
.

Marissa's dream is to keep her restaurant from being seized by ruthless developers. She's broke, out of options, has a deadline, and a cheating ex who offers to marry her and solve her financial problems. Everything changes when a guy named Finn saves her life and provides a completely different kind of option.

“
A
bort mission
, abort mission.” His commander’s voice was clear through Finn’s headset.

Curses. What is this about?
“What is it, sir?” He kept his voice low.

“Your presence is required at the center.”

Finn glanced around the dense, leafy foliage, down the path, and between the trees, but couldn’t see any of his squadron. He adjusted his headset, pushed his helmet back off his forehead. This was unusual, interrupting a mission, even if it wasn’t the real thing. It had to be something important. Maybe they’d been attacked. Maybe it was time for a real mission. Finn had been doing these practice missions for three weeks, and he was ready for some action—real action—again. Maybe there was an invasion. Maybe the Kormic had penetrated an Asazi entry. He ran the back of his hand over his forehead. It came back streaked with camouflage paint, confirming his suspicion that he was a mess. And probably not a pleasant-smelling one. “Should I shower and clean up first, sir?”

“Negative. As is, soldier. As is. Report to the conference room at once.”

Slinging his weapon over his shoulder, Finn double-timed back to the center, boots crunching the undergrowth. The entrance appeared suddenly in front of him, almost imperceptible unless one knew where to look. He shoved his ID into the recognition slot, and the door opened with a whoosh. Three heavily reinforced hallways and two ninety-degree right turns at dead ends later, he was standing in front of the conference room, almost out of breath. Not from exertion, but from anticipation. Hopefully this was good. A good assignment. A chance to infiltrate the enemy, take down some of them, sabotage one of their strongholds, maybe more than one.

He took a deep breath and knocked.
Curses.
He must be a sight, if the camo streaks on his hand were any indication. He didn’t even want to know what he smelled like. He was a mess in front of his superiors, probably not a good thing. But surely they’d take into account that he was fresh from a mission. No, not fresh from a mission, interrupted and abruptly yanked from a mission. Worry about what they wanted coursed through him. A bead of perspiration made its way down his spine, between his wings.

“Enter.” The voice was muffled behind the steel door that opened with a quiet whoosh.

Several men stood around the gleaming metal conference table, hands behind them, backs soldier-straight, chins tucked, but Finn’s eye caught on one. His cousin, Kal.

He fought and defeated the urge to acknowledge his cousin in an unprofessional way. “Sirs.” Finn addressed the room at large.

His commanding officer had a look on his face that made Finn nervous, but he couldn’t figure out why.

No one said a word for more than a minute. All eyes were on him.

“Finneas Ramont, reporting as ordered, sir.” Would that jar them from their silence?

“Soldier. Bad news. And an assignment. Which do you want first?”

What kind of choice was that? And what kind of bad news could they possibly deliver?

Kal sported the same uniform Finn did, except his was pristine, not grimy, sweaty, or camo-streaked. It wasn’t exactly identical because Kal’s rank was higher than Finn’s. Naturally so, since Kal was two years older than Finn.

Finn’s breath was gone. His lungs felt empty. The last time he’d felt like this was when he was shot in the chest. Though he had body armor on, the impact was the same: breathlessness coupled with the most intense pain. He bit back the word
Nana
, his name for her. He wouldn’t let them see the weakness, the emotions he held for her, the one who’d raised him. “My grandmother? How? When?”

“Age. She wasn’t young. And we don’t have the same medicines as humans. She is the only one of that kind here. Was the only one.” His commanding officer corrected himself. “Last night. It was sudden. Unexpected.”

Of course it was unexpected. Finn had been at her house ten days ago, before he left for the mission. She’d been all right. Smiling, laughing with him—her only grandchild. He swallowed a bitter knot of self-blame. He’d left her alone. He hadn’t been there. No, he wouldn’t have been there much anyway. Not when he’d spent so much time avoiding her when he was younger—denying his human side, even if he was only a quarter human.

He fought the sinking bereavement. He would deal with these emotions in private. Swallowing a knot of self-disgust and pain, coupled with self-blame, he asked, “The assignment, sir?”

“We are preparing for the Third Wave. We want you to go. Your experience, your instincts, your bloodline—they could all be valuable when we access Earth again, during the Third Wave. This Wave must succeed.”

Finn grabbed the table’s edge as he tried to absorb this assignment. The table’s cool surface was smooth but not reassuring under his fingertips. “You want me to go to Earth.” All the time he’d spent denying the human in him, all this time, repelling it.
And now this.

The Cut by Carol Lynne: Kings of Bedlam MC Series, Book One by Carol Lynne
Marked By the Wolf (Werewolf Romance) by Mac Flynn
One for My Baby by Tony Parsons
Flintlock by William W. Johnstone
Maybe This Time (The Educators Book 3) by Kathryn Shay
Underground in Berlin by Marie Jalowicz Simon
Body Art by Garry Charles
Command by Sierra Cartwright
Bullied by Patrick Connolly
1 The Outstretched Shadow.3 by 1 The Outstretched Shadow.3