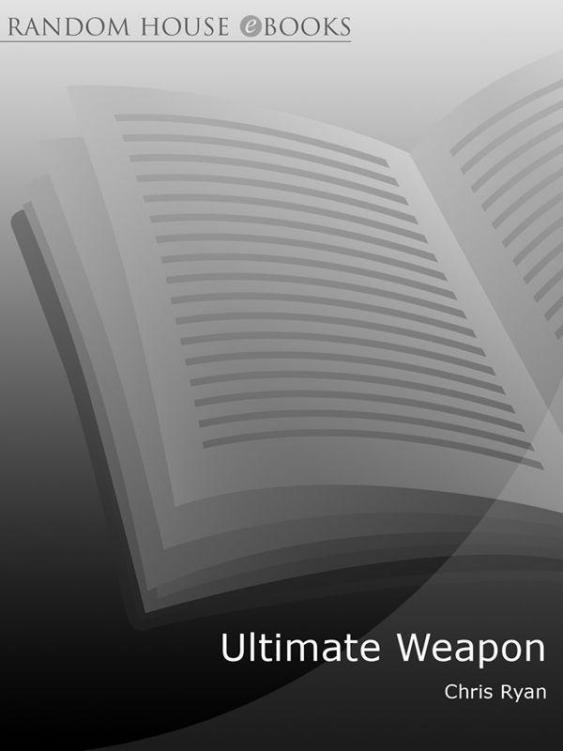 Published in the United Kingdom by Arrow Books in 2007

Chris Ryan has asserted his right under the Copyright, Designs and Patents Act, 1988 to be identified as the author of this work.

This novel is a work of fiction. Names and characters are the product of the author’s imagination and any resemblance to actual persons, living or dead, is entirely coincidental.

The Random House Group Limited makes every effort to ensure that the papers used in its books are made from trees that have been legally sourced from well-managed and credibly certified forests. Our paper procurement policy can be found at:
www.randomhouse.co.uk/paper.htm

Chris Ryan was born near Newcastle in 1961. He joined the SAS in 1984. During his ten years he was involved in overt and covert operations and was also Sniper team commander of the anti-terrorist team. During the Gulf War, Chris was the only member of an eight-man team to escape from Iraq, of which three colleagues were killed and four captured. It was the longest escape and evasion in the history of the SAS. For this he was awarded the Military Medal. For his last two years he was selecting and training potential recruits for the SAS.

He wrote about his experiences in the bestseller
The One That Got Away
which was also adapted for screen. He is also the author of the bestsellers,
Stand By, Stand By, Zero Option, The Kremlin Device, Tenth Man Down, The Hit List, The Watchman, Land of Fire, Greed, The Increment
and
Blackout
.
Chris Ryan’s SAS Fitness Book
and
Chris Ryan’s Ultimate Survival Guide
are published by Century.

He lectures in business motivation and security and is currently working as a bodyguard in America.

Fiction
The One That Got Away
Stand By, Stand By
Zero Option
The Kremlin Device
Tenth Man Down
The Hit List
The Watchman
Land of Fire
Greed
The Increment
Blackout

To my agent Barbara Levy, editor Mark Booth, Charlotte Haycock, Charlotte Bush and all the rest of the team at Century.

16 November 1994.
Nick Scott walked in silence. He could feel the cold air blowing down from the side of the mountain, brushing across his raw skin. A thin sweater was all that was covering his chest, and a light dusting of snow was filling the morning air. It made no difference, thought Nick sullenly. A man who has lost his wife doesn’t feel the cold. He doesn’t feel heat, pain or pleasure, or any other sensation. Just a frozen emptiness inside.

Particularly when the man knows he has only himself to blame.

He glanced up towards the mountains. The heights of Les Houches, the smaller of the two mountains that dominated the Chamonix valley, were right ahead of him. A shaft of sunlight suddenly broke through the clouds, illuminating its lustrous white surface, while on the other side of the ravine the larger Mont Blanc was still shrouded in mist and cloud. It was a week now since Mary had died. Three days since they had buried her, here among the mountains she loved, and where they had hoped to make their new life together. A life that didn’t involve war, fighting, endurance or survival.
A life that had nothing to do with the Regiment. Just the two of them, their ski school and their daughter. A small, happy family, just the way it always should have been.

And now it’s gone, buried along with Mary, and every other dream I’ve ever had.

‘You OK?’ he said, looking towards Sarah.

She was walking at his side, the buttons of her ski jacket done up tight against her thin neck. Just fifteen, thought Nick. Christ, she was young. Sometimes he had to pinch himself to remind himself that although she was starting to look like a woman she was still just a kid. Ever since she was born, she’d constantly surprised him with how fast she’d developed. Sarah was always ahead of the other kids, able to talk at two, count at three and read before she was four: it was as if she was rushing through life, getting her childhood out of the way, crashing forwards towards a rendezvous with her own destiny. When your dad’s as rubbish as I am, maybe you have to grow up fast, he reflected bitterly.
With no one to look after you, you learn to look after yourself.

‘I’m scared of what’s going to become of us now that Mum’s not around any more.’

She stopped in the snow, and turned to face him. Her expression was worried, frightened. Sarah had long brown hair, and blue eyes that shone out of her thin, freckled face like the headlamps on a car. Her features were delicate, finely painted like her mother’s, but in her forehead and across her cheekbones there were traces
of her father’s brute, ox-like strength. ‘You can say what you like, but I just know,’ she continued. ‘We’re not going to be OK.’

‘What happened to you in Iraq, Dad?’

The words struck Nick harder than any of the bullets he had ever taken. A bullet was just a lump of cold steel. It could tear through your flesh, and fracture your bones, but so long as you were still alive it left your spirit intact. This was worse. This hurt in a way that no bullet ever could.

She walked two paces ahead of him, twisting into one of the pathways that started to lead up the side of the mountain. They had lived here for just over a year now, but she had adjusted to the place much better than he had. Sarah spoke French like a local, and had adapted to the school. As for me, thought Nick, I have hardly got to know a soul. I came here to escape.
But you can’t escape from yourself.

‘I’m fifteen,’ she said, not turning to look at him. ‘I can handle the truth.’

The truth, thought Nick. Maybe she can handle it, and maybe I can’t. The bald outlines of the story were clear enough. He was a Regiment man, had been for a decade. He’d just missed the Falklands War but had been involved in every action the SAS had fought in since then, and fought with distinction as well. He had the medals and the scars to prove he was as good as any man in the Regiment. Then, in the lead-up to the Iraq
War, he’d been dropped into enemy country. First into Kurdistan, then travelling south in a small unit of four men until they hit Baghdad. Two of his mates had been killed on the way. Two of them had been captured. What happened to Ken, Nick had no idea. The last memory he had of him was the grimace of defiance on his face as the Iraqi soldiers smashed the butts of the rifles into his ribs as they led him away. Probably rotting in a shallow, unmarked grave by now. Nick had been taken into the prison cells below Saddam’s Republican Palace, and tortured. What the hell they’d been trying to get out of him, he never knew. Perhaps it was just sadism. Their army was getting whipped, and they needed someone to take it out on. He just happened to be there. It was nothing personal. It just felt like that when they were plugging electrodes into your balls.

It was only after the war had ended, as part of the ceasefire agreement, that Nick had been released. He had had no idea the war had even ended, and when they came to haul him out of the dark, dank cell in which he had been living for the past few weeks, he’d assumed it was a firing squad he was about to meet, not a helicopter to ferry him home. It had taken two months in hospital to patch up his wounds, but the mental damage had been far worse than the physical impact. After he returned to the Regiment, it was impossible to get back to soldiering again. The orders didn’t make any sense. The training had no purpose. The missions seemed stupid. After a year, he quit, disgusted with both himself and the army.