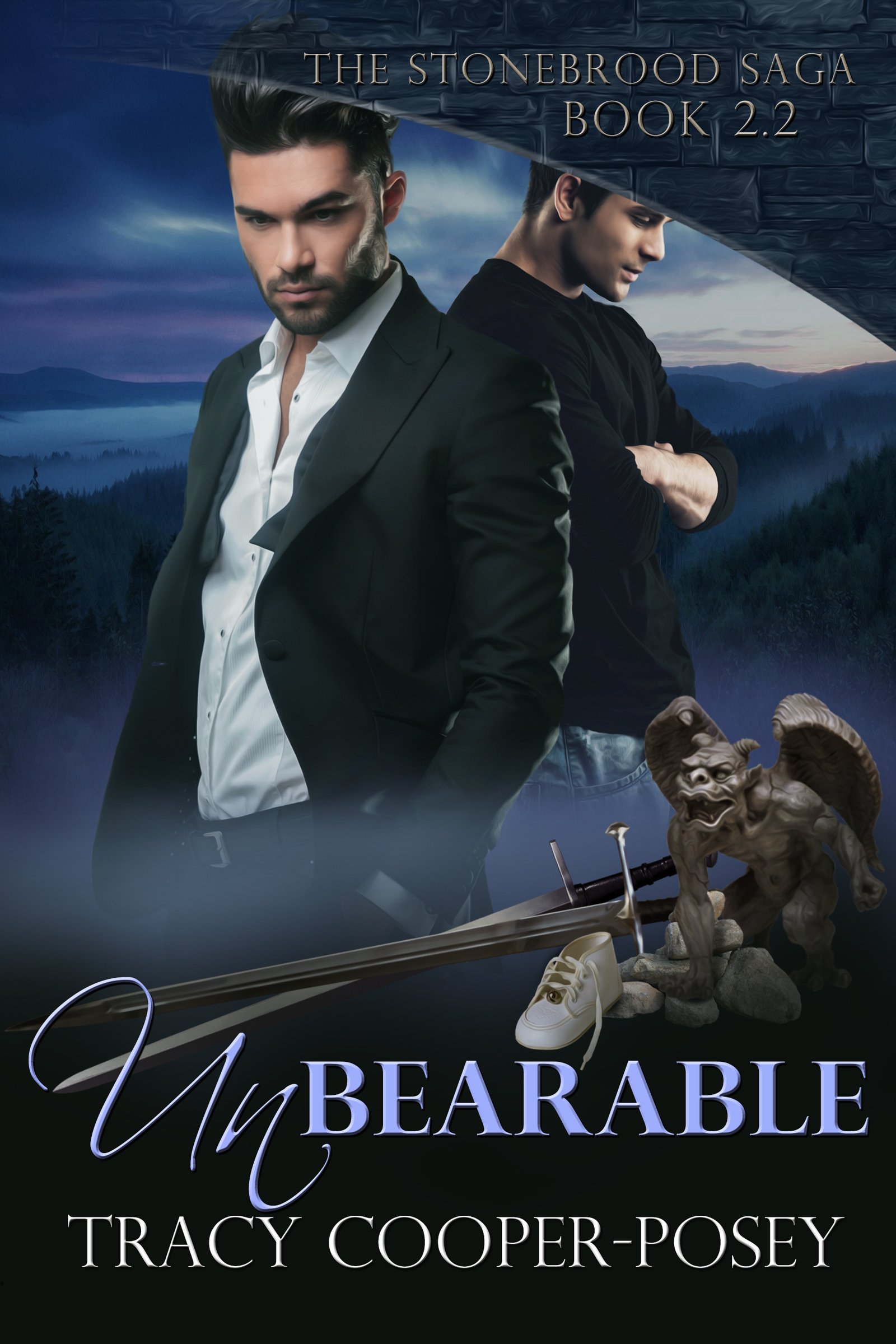 Praise for The Stonebrood Saga

The next book in The Stonebrood Saga 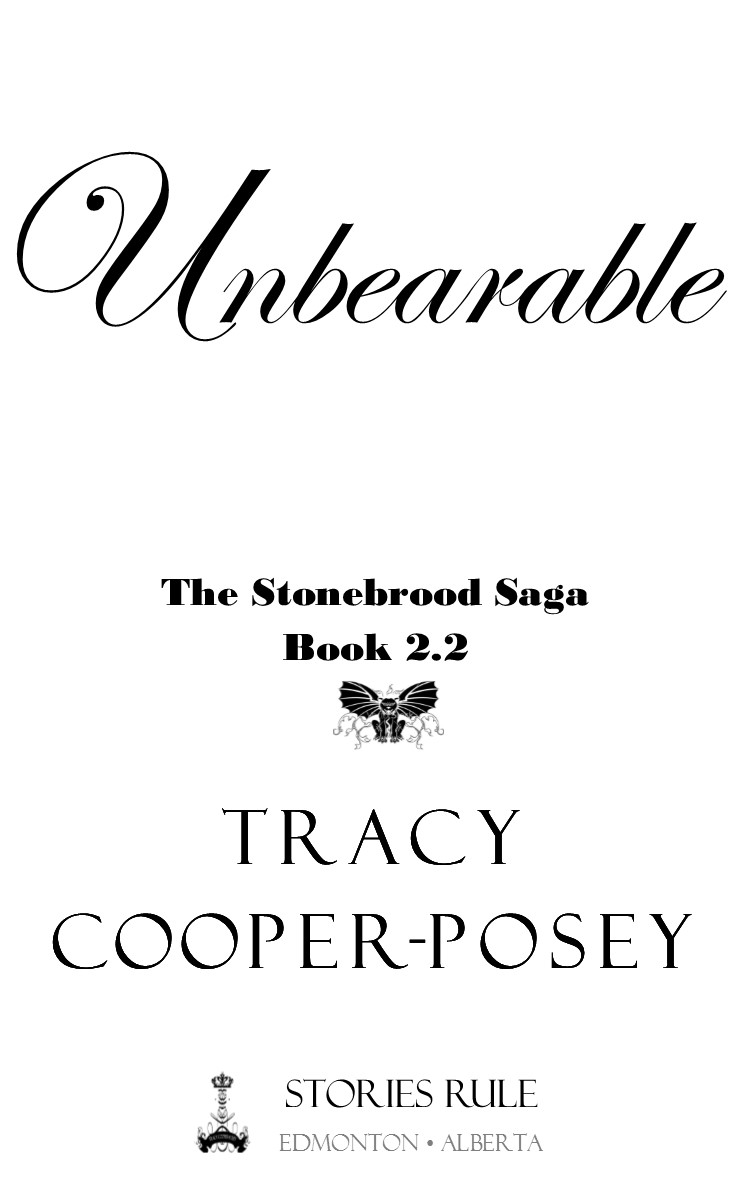 Tally Grey Connors’ final story.
Carson Connors heads out on one last, minor hunt before retiring forever to raise his daughter, Riley, but as Tally goes into labor, tragedy strikes. The hunt for the last two surviving gargoyles—the strongest and smartest of the Stonebrood clan—warps life and love, straining even Nick and Damian’s four century long relationship, in ways that no one could possibly anticipate.
Unbearable
is an emotion-charged part of the Stonebrood Saga, revealing the tragic events of Riley’s early childhood.
Get your copy of this
Unbearable
story today.
Warning:
This is a novella length story (about 80 pages long), and is best read in series order, to avoid spoilers.
This is Book 2.2 in The Stonebrood Saga:
Book 1.0:
Carson’s Night
Book 2.0:
Beauty’s Beasts
Book 2.1:
Harvest of Holidays*
Book 2.2:
Unbearable*
Book 3.0:
Sabrina’s Clan
*
A Stony Stories tale: Short stories featuring the characters and situations from the Stonebrood Saga
A vampire gargoyle urban fantasy story.

Praise for The Stonebrood Saga

Riley crept into the room, even though she knew that Damian, who was standing at the window, would be able to hear her no matter how quiet she was. It was the mood of the house that made her move quietly. In fact, it had been the entire day that made her want it to slide past unnoticed.

She and Nick had tracked down some rumors of wild animal attacks early that morning, in lower New York state. Nick had been the same—morose and withdrawn, even when they were on their own. It had been like trying to stir cold molasses.

Nick was bringing up the duffel bag with their swords and Riley had hurried ahead, not quite articulating in her own mind the idea that being on her own for a moment would be a relief. Instead, she told herself she was eager to see Damian after a long day of fruitless work, which was only partly true.

Yet here he stood, staring out at the spitting snow, as still and silent as Nick.

He turned when she was barely past the open door and gave her a small smile. But it didn’t reach his eyes, which were sad. Then he held out his arm and relief touched her as she hurried to his side. He pulled her in against him and lifted her chin to kiss her. “It didn’t go well,” he guessed. “Your face is a story of its own.”

“This whole day has been utterly useless,” she declared. She looked over her shoulder. “I don’t know what has got into Nick and it feels like you’ve been bitten by the same bug, too.” She gripped his sweater. “What am I missing, Damian? You know Nick will never tell me. He’d rather stake himself than talk about feelings.”

Damian sighed. “We’re both guilty of that. Today of all days, especially.”

She pressed her lips together, holding back her questions. Damian was often easier to provoke into talking about himself and Nick, or about slippery emotions, but that was relative. Nick clung to his British reserve, while Damian was so ancient he had been raised in a culture that celebrated war, not peace. He was just as prickly as Nick. Only sometimes and only because it was her, did he unbend enough to talk.

But not right now. She could feel the tension in his chest. He had the shields up.

Nick shut the apartment door and locked it and Damian sighed and let her go and turned to face Nick as he moved into the room. “That’s it for today?” he asked.

“I am not moving out of this apartment again today even if the fire alarm goes off,” Nick said heavily, dumping the duffel bag on the sofa. “What a spectacular waste of a day.” He ran his fingers through his hair in frustration.

Damian caught his gaze, then glanced at her.

“What’s going on?” Riley demanded, as Damian moved over to the French Empire desk in the corner of the room and opened one of the drawers.

Nick picked up her hand and drew her around the sofa to stand in front of him. “This has been a terrible birthday for you, Riley. I’m sorry about that.”

“Oh….” Her heart jumped a little. “You knew it was my birthday?”

Damian came over to where they were standing. He was carrying a wrapped gift in his hands, a flat oblong with bows and flowers on it. “We have reason to never forget the date. It is engraved on our memories more deeply than any other event in our lives.” He held the gift out to her. “Happy birthday, Riley. I hope this helps make up for our bear-like behavior today.”

She took the gift, puzzled. “I don’t understand.”

Nick touched the gift. “This will help you understand.”

She pulled at the ribbon and tore the paper, even though she didn’t want to. Her hands were shaking. The dark mood that had gripped both of them was making her heart hurry along far more than it should.

The paper fell away. Nick plucked it out of the air as it drifted toward the floor and crumpled it into a ball with one hand.

Riley looked down at what she was holding. It was a thick wad of cheap office paper. The first sheet was blank.

She rifled through the rest and saw words. Thousands of them.

Damian picked up the heavy duffel bag and dumped it on the floor and patted the cushions. “Here,” he said.

She moved over to the sofa on autopilot, looking down at the manuscript. She sank down into the cushions.

She looked up. He was holding a wine glass out to her, the red liquid winking in the light from the lamp on the table next to her. Riley took the glass, sipped and put it on the table, then lifted the top sheet aside.

January, 1983: I’m not sure I can tell this story even this way, when it’s just me and a blank screen and no one to hear.

The words leapt up at her and she gasped and looked at Damian.

“I know we aren’t good at talking about the past,” Damian said. “Today of all days, especially. I wrote this to make up for that lack.”

Nick sat next to her. “We won’t always ruin your birthday,” he told her. “But this is the first time in nearly thirty years that you’ve been in our lives on January second and it is making us remember more than we’d like.”

She gripped the glass tightly. “Should I…do you want me to read this now?”

“I would like to read it now. But I don’t want you getting all squeamish and self-conscious.”

Nick picked up the ancient hardcover book sitting beneath the lamp, leaning past her to reach it. He held it up. “I have Julius Caesar to keep me company.”

Damian snorted. “That amateur.” He gave her another small smile. “I’m going to cook dinner for you. Thai green curry.”

“I know.” He headed for the kitchen while Nick opened his own book, leaving Riley alone with the pile of pages.

She took another sip, a longer one. Then she began to read.

I’m not sure I can tell this story even this way, when it’s just me and a blank screen and no one to hear. I’m writing this for you, Riley, but I think I’m only going to be able to tell this story if I’m just telling it to myself. So let’s pretend I’m just talking to myself, getting things straight in my mind. In a way, that’s exactly what I’m doing.

Even deciding where to start is a matter of picking one of a dozen bleak days.

I’ve been through tough times before. Many of them. You don’t live for as long as I have and not collect sad memories like broken seashells on a deserted shore. But 1983 was almost unendurable and it began on the second day of the year.

Tally’s water broke in the early afternoon of New Year’s Day, not long after Carson Connors, Miguel Sandoval and Nick had left for the Widow Jane mine in response to the marked map that Donna had given Carson.

Joy and Connie were passed out on the sofa, the fumes of alcohol rising from their bodies like a foul exhaust. Oscar and Donna had left not long after midnight had come and gone. Oscar had looked ill and Donna had been quiet. Jimmy’s death had hit her hard and Oscar was adjusting to that unsavory fact.

That left me to get Tally to the hospital for the delivery, which I didn’t mind at all. We wrote a note for Carson and Nick and took Connie’s rusty Mustang.

At the hospital, they parked me out in the waiting room, but Tally knew I was there, so I stayed where I might be useful and waited. I’ve seen enough labors to know that Tally’s first might last for a dozen hours or more.

Midnight came and went. It was three in the morning on January second when Nick walked into the hospital, almost stumbling over his own feet. When I saw his eyes, I knew. Not the details. I still don’t have all the details, thirty years on. But I knew the shape of it.

Nick fell into the plastic chair next to me and bent over, trying to breathe. The rich, thick coppery scent of fresh blood wafted up from beneath his zippered coat.

“He’s dead. Carson’s dead,” he whispered, so low that no one but I could hear it.

Even though I had guessed, even though I thought I had braced myself, the words still skewered me like a javelin to the chest. My very first thought was,
How are we going to tell Tally
?

Then, quickly, like cards shuffling in a waterfall, I saw all the days ahead. A new child, no income, no husband and the world’s deadliest creatures hunting her. Tally’s life would be impossible. “Artemis above…” I breathed.

“It’s not official yet,” Nick whispered. “I had to put the…I had to take him into the forest around the mine, make it explainable.”

He didn’t have to expand on that. Out in the woods of New York state, there were still predators that might attack a human, although even in the eighties sightings were growing rare.

I had no doubt that the gargoyles had eviscerated Carson. Some of the blood scent rising from Nick was the darker, thicker sort that spoke of organs and oxygen-rich arteries. I should have felt blood-lust, but I didn’t. I had stopped feeling altogether at that moment.

A mauled body in the woods would lead to natural assumptions. A bear or cougar or even a wolf. The human authorities would find a story that seemed to explain the death, if we helped them by almost connecting the dots.

That meant it would be days before the body was found, Carson’s identity confirmed and Tally officially informed.

“We can’t say
anything
to her. Not now.” That made me feel something at last. I felt ill. Lying to Tally was something I avoided. She was too good at spotting lies and evasions and I just didn’t like the guilt it engendered. Which was funny, as I’d known Tally since she was in diapers. I’d changed some of those diapers myself. Tally, the grown woman, though, was a force of nature. She knew what she wanted and she was the best hunter I’d ever seen. I had never said it aloud, but I sometimes considered the almost heretical idea that she was even better than Nick.